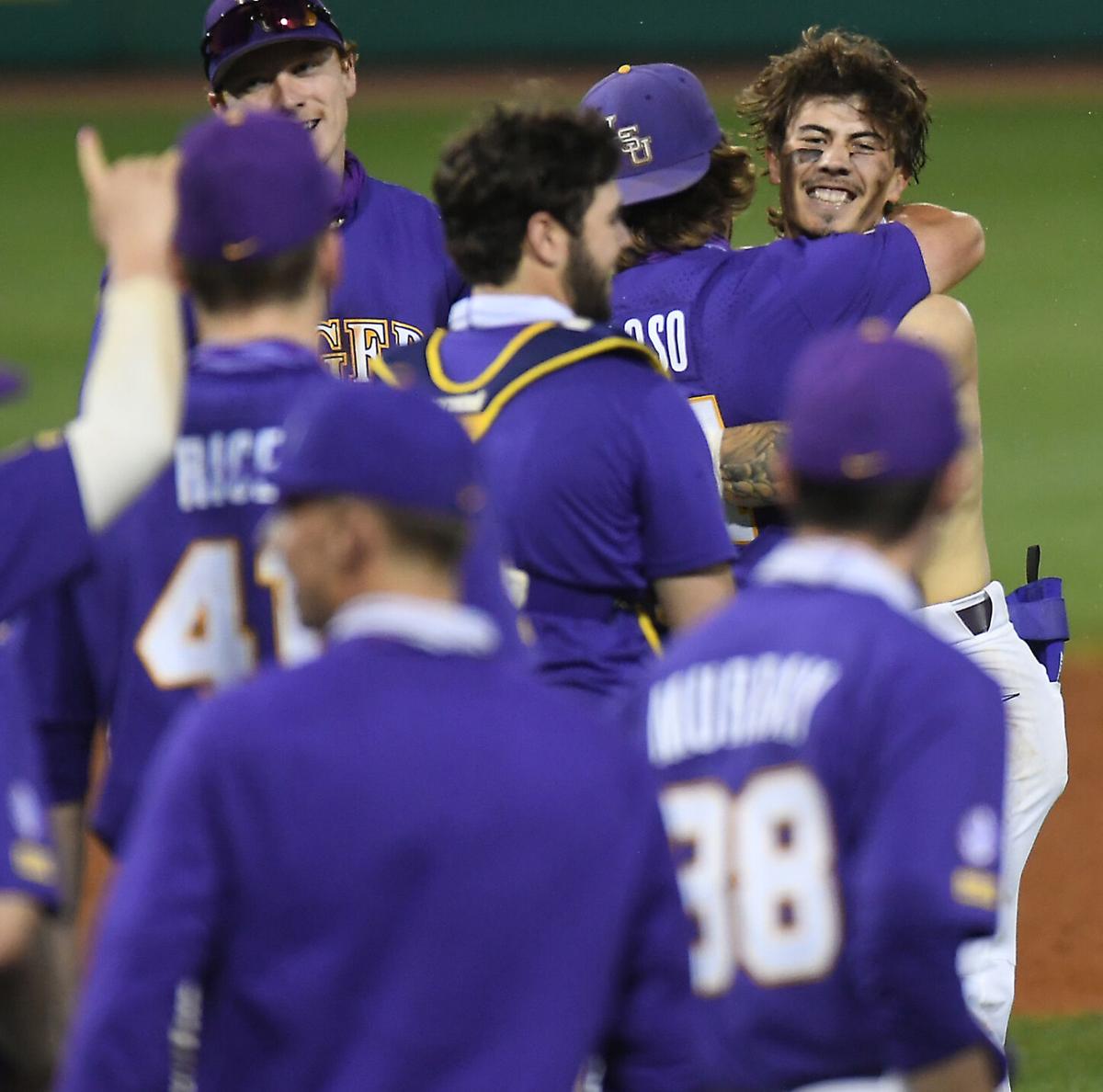 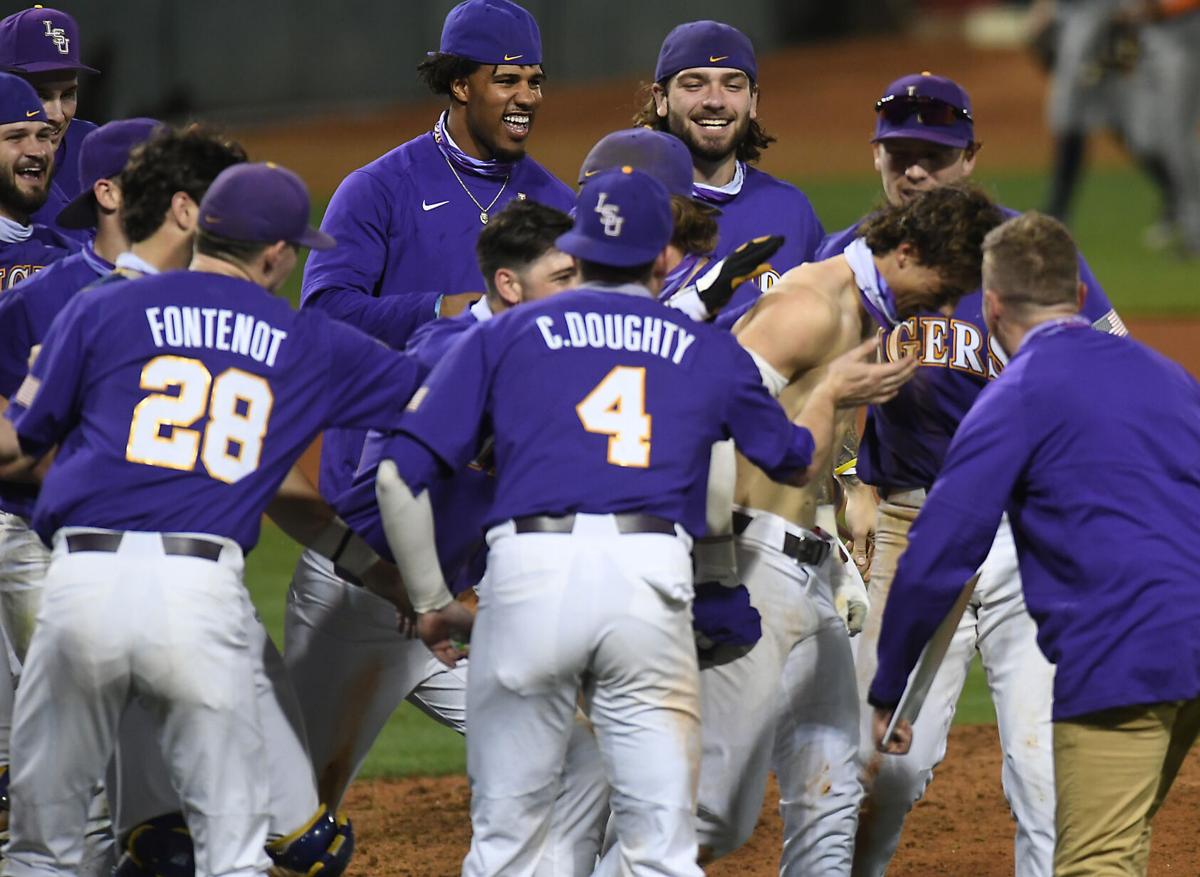 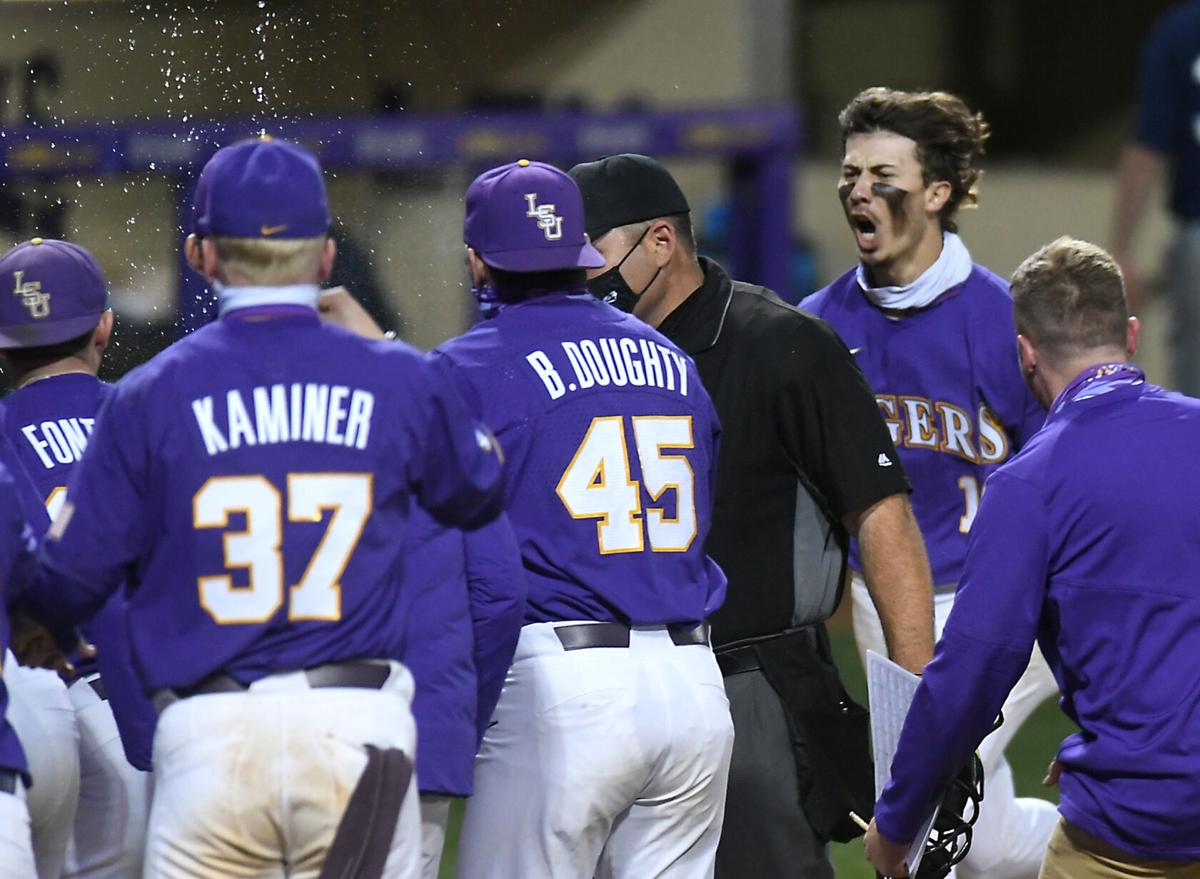 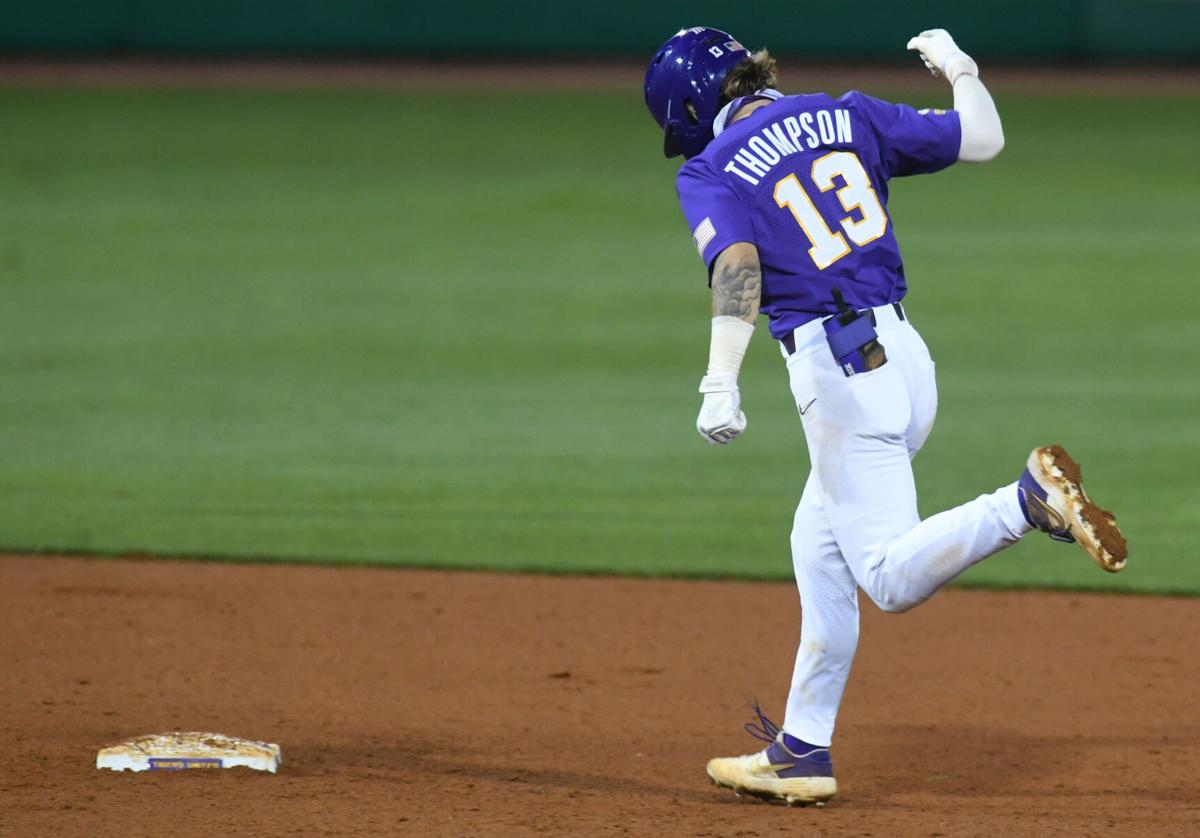 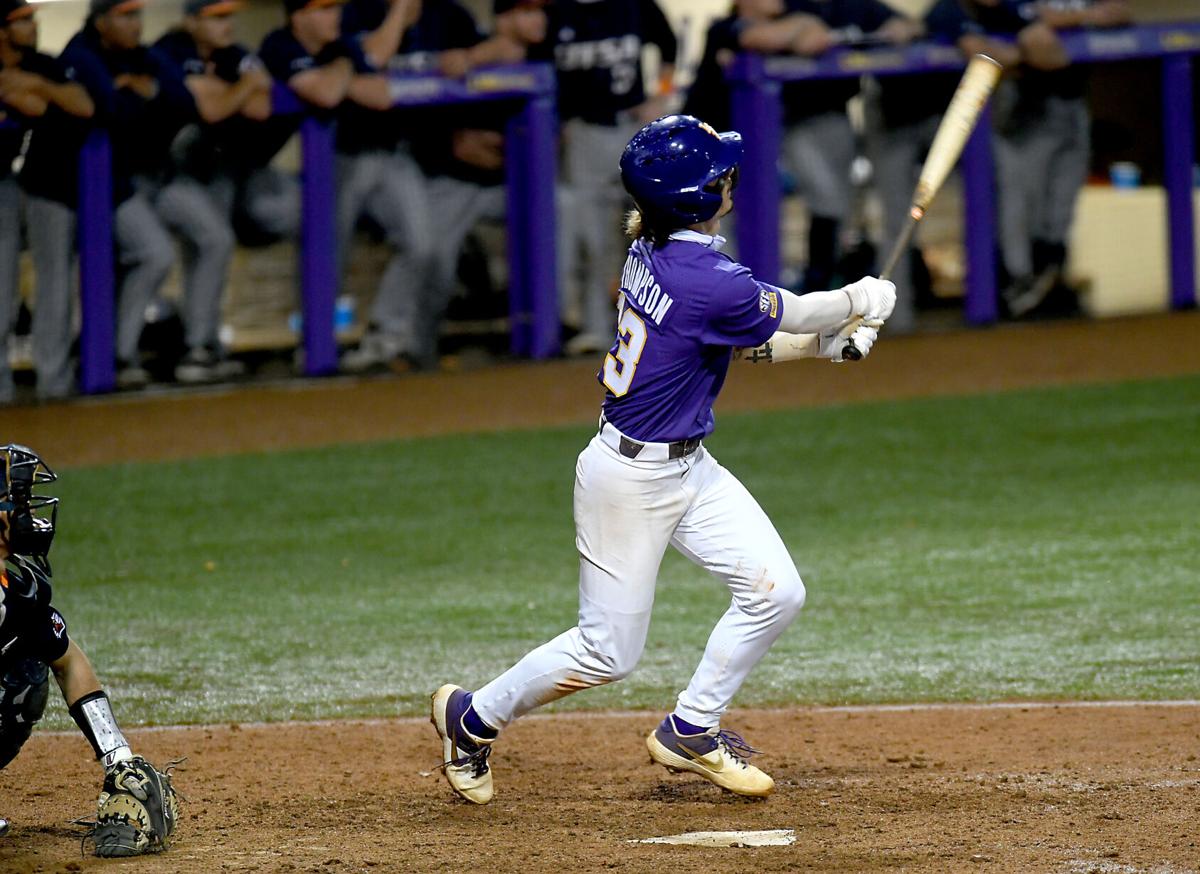 And despite all of that, the Tigers survived.

Playing extra innings for the first time this season, No. 15 LSU won 10-9 inside Alex Box Stadium. The Tigers carried a shutout into the eighth inning, lost the lead, fell behind twice in extra innings and managed to clinch the weekend series.

“That was one of the more crazy games that we had in my tenure here at LSU,” coach Paul Mainieri said.

As No. 15 LSU plays UTSA in its final series before the conference slate begins next weekend, the Tigers are trying to settle their bullpen.

LSU’s players streamed out of the dugout and formed a half-circle around home plate. They surrounded Thompson as he jumped into the group, bouncing around while they ripped off his jersey, LSU’s celebration this season for game-winning hits. The players hugged and chest bumped Thompson. Freshman Blake Money, the winning pitcher, carried his jersey off the field.

The Tigers led 4-0 entering the eighth inning, but UTSA tied the score as LSU tried to find a shutdown pitcher late in the game. LSU cycled through 10 relievers. Marceaux had thrown six scoreless innings, reaching a streak of 24 ⅓ consecutive innings without an earned run since last season.

UTSA hit four straight singles in the eighth before senior right-hander Aaron George, the third pitcher of the inning, recorded an out. With the score 4-2, a passed ball moved the tying run into scoring position. George walked the next batter, loading the bases, and LSU brought in senior right-hander Ma’Khail Hilliard.

Hilliard had returned to form this week with the best outing since his sophomore year. He allowed a single up the middle on his first pitch. One run scored. After another walk loaded the bases with two outs, Hilliard struck out sophomore center fielder Shane Sirdashney on a questionable 1-2 pitch. UTSA coach Pat Hallmark argued the call, briefly running at the home plate umpire after he was ejected.

Freshman Garrett Edwards pitched the ninth inning for the second straight game, trying to preserve the 4-3 lead. After the leadoff runner reached on a fielding error by Doughty, Edwards allowed a game-tying double. He stranded the go-ahead run at third base. The tie didn’t last long.

'Luck is the residue of design': LSU beats UTSA in wild finish as Jaden Hill rebounds

Gavin Dugas sprinted down the first base line and spread his arms wide once he crossed the bag Friday night, convinced he was safe on a potent…

In the 10th inning, senior right-hander Trent Vietmeier, who hadn’t pitched since Feb. 27 because of a medical issue unrelated to pitching, allowed a two-run homer to Austin Ochoa. The fans left in Alex Box Stadium fell silent as UTSA cheered from its dugout.

After UTSA scored another run and took a 7-4 lead, pinch hitter Mitchell Sanford hit a leadoff single. Two batters and one out later, Doughty smashed a fastball 404 feet into left-center field. The three-run homer tied the game.

“I wasn’t focused on that,” Doughty said. “I was focused on getting the next batter up and doing my part.”

The score remained 7-7 into the 12th inning, when UTSA scored two runs against Money as Jonathan Tapia crushed a two-run double to straight away center field with two outs.

LSU fell to its final strike in the bottom of the inning. With a runner on third and two outs in a full count, Dugas hit a home run 424 feet into the left field bleachers, tying the game once again.

Money retired the side in the top of the 13th inning, giving LSU an opportunity to win in the bottom of the frame. With one out, Thompson turned on a low fastball. It zipped over the left field wall, his fourth homer this season. Thompson pumped his fist as he jogged around the bases, and the celebration began.

LSU outfielder Dylan Crews proving he does more than hit

Dylan Crews leaned forward, scooped a ball rolling through the outfield grass inside Alex Box Stadium, transferred it to his right hand and re…

“As long as we’re still breathing,” Thompson said, “as long as that last out isn’t made, we know we have a chance.”

Plenty of concerns arose during the game, particularly from a bullpen LSU hoped to settle before conference play begins next weekend. The Tigers blew lead in the eighth inning or later for the sixth time this season. And they won, in their minds showing resilience.

“A lot of things to be concerned about, but we’ll rehash it all later,” Mainieri said. “Right now, I’m just so proud of the guys.”

LSU vs. UTSA, Sunday: Who's starting, how to watch, what to watch for

Who's starting, how to watch and what to watch for when LSU ends its weekend series against UTSA.