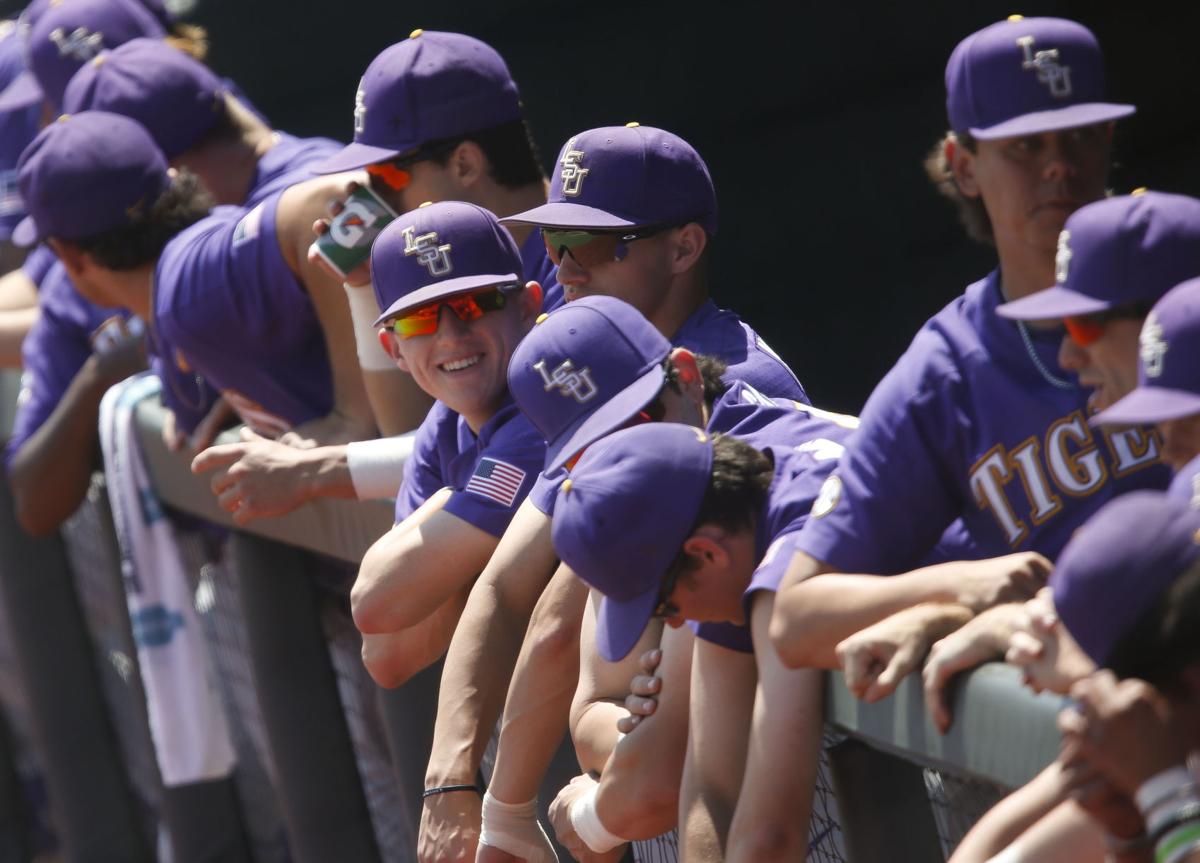 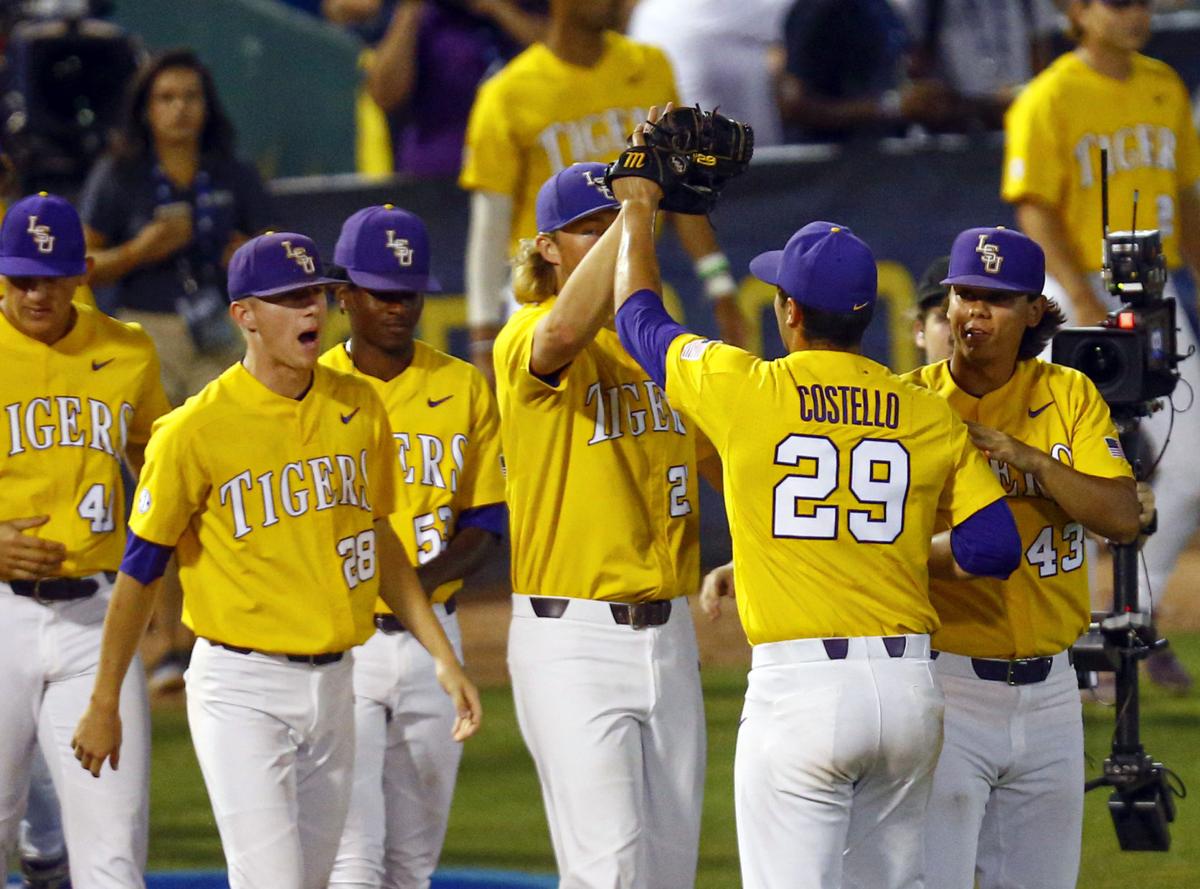 LSU's Chase Costello (29) celebrates with teammates after the Tigers' 12-2 victory over Mississippi State in the SEC tournament on Friday, May 24, 2019, in Hoover, Ala.

LSU's Chase Costello (29) celebrates with teammates after the Tigers' 12-2 victory over Mississippi State in the SEC tournament on Friday, May 24, 2019, in Hoover, Ala.

Saul Garza pushed his catcher’s mask onto his head this past Friday and turned to home plate umpire Darrell Arnold, who wore a microphone for the SEC Network. Stuck in muggy heat at the Southeastern Conference tournament, they chatted before LSU resumed its game against Mississippi State.

“Dude,” Arnold said. “I got to get my girlfriend some of that. You smell amazing, man.”

“You like that?” Garza asked. “I figured it’s been a long day for you.”

The conversation revealed LSU’s method for repelling insects and, at least for Garza, reviving rancid equipment. Since the beginning of May, the Tigers have sprayed themselves with the mist, creating a fragrant blend of deep amber, sugar kisses, chasing sunsets and sweat.

“I mean, why not smell good when you can keep the mosquitos off as well?” Garza said, smiling. “Pretty simple.”

Rabalais: LSU no shoo-in to win its regional. And Stony Brook is back (surprise!) to add a 'nervous edge.'

You just knew that if LSU did enough to host a regional in this year’s NCAA baseball tournament, there would be a little dramatic twist thrown…

The proximity of Alex Box Stadium, the site of this weekend’s NCAA regional, to the Mississippi River brings swarms of gnats every summer. Outfielders have spent games swatting them away from their faces. The Tigers struggled to keep them out of their noses and mouths. Center fielder Zach Watson used to pick them from his ears. Some players rubbed dryer sheets on their hats. It didn’t help.

“You got to do something about these gnats,” Watson told director of baseball operations Nate Fury last year.

A few months ago, one of the men who worked on LSU’s field told assistant equipment manager Matthew Montgomery to try Amber Romance. The man had used it on fishing trips. Montgomery bought 12 bottles from Amazon — six for baseball and six for softball.

How does LSU feel about Stony Brook as 'real season' begins? 'Nothing at all to do with 2012'

When LSU played Ole Miss at the beginning of May, the gnats had arrived with the summer heat and rising river. Montgomery carried a bottle to LSU’s dugout. The players hesitated. So did third base coach Nolan Cain, who thought it was a prank. Montgomery asked them to try.

“I'm not spraying this on me,” Cain said.

“It has vanilla,” Montgomery said, explaining the grounds crew had used it. “It works.”

“If it works,” Cain replied, “then you spray on it on yourself.”

Montgomery doused it over his body, ending Cain’s suspicion of a practical joke. Cain used it. And when he went to the third base box, the gnats avoided him.

After seeing the effects of Amber Romance, LSU has used it every home game. Montgomery also brought a bottle to the Southeastern Conference tournament. Gnats were particularly bad in the outfield, but shortstop Josh Smith used it, too. So did people who never left the dugout.

There's a "chance" second baseman Brandt Broussard and pitcher Trent Vietmeier will return from injuries during the NCAA regional this weekend.

As LSU hosts an NCAA regional this weekend, the Tigers will continue to use Amber Romance. The fragrance has repelled insects, and the Tigers like the smell.

“Hopefully other teams don't know about it,” Montgomery said, “and they get swarmed by the gnats.”

Watson, skeptical at first, has developed a routine. He sprays the mist on the brim of his hat and on his neck during pregame warmups. He reapplies before the game. He uses it once more around the third inning.

“I guess I can wear this from now on,” Watson said. “I might have to get some for my own personal use — Nah. Kidding. I wouldn't wear that.”

“It would be a good smell for a girl to wear. For sure.”