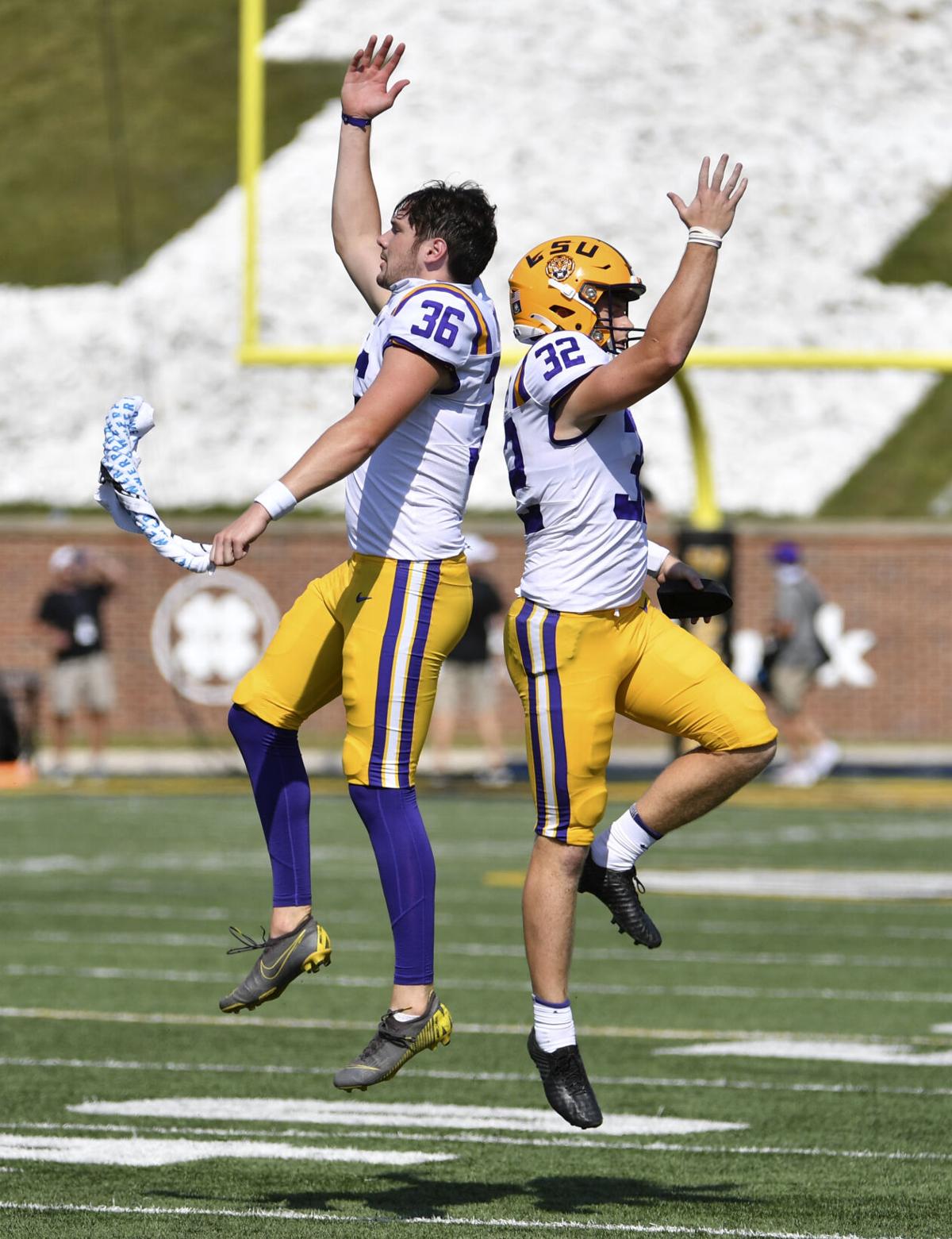 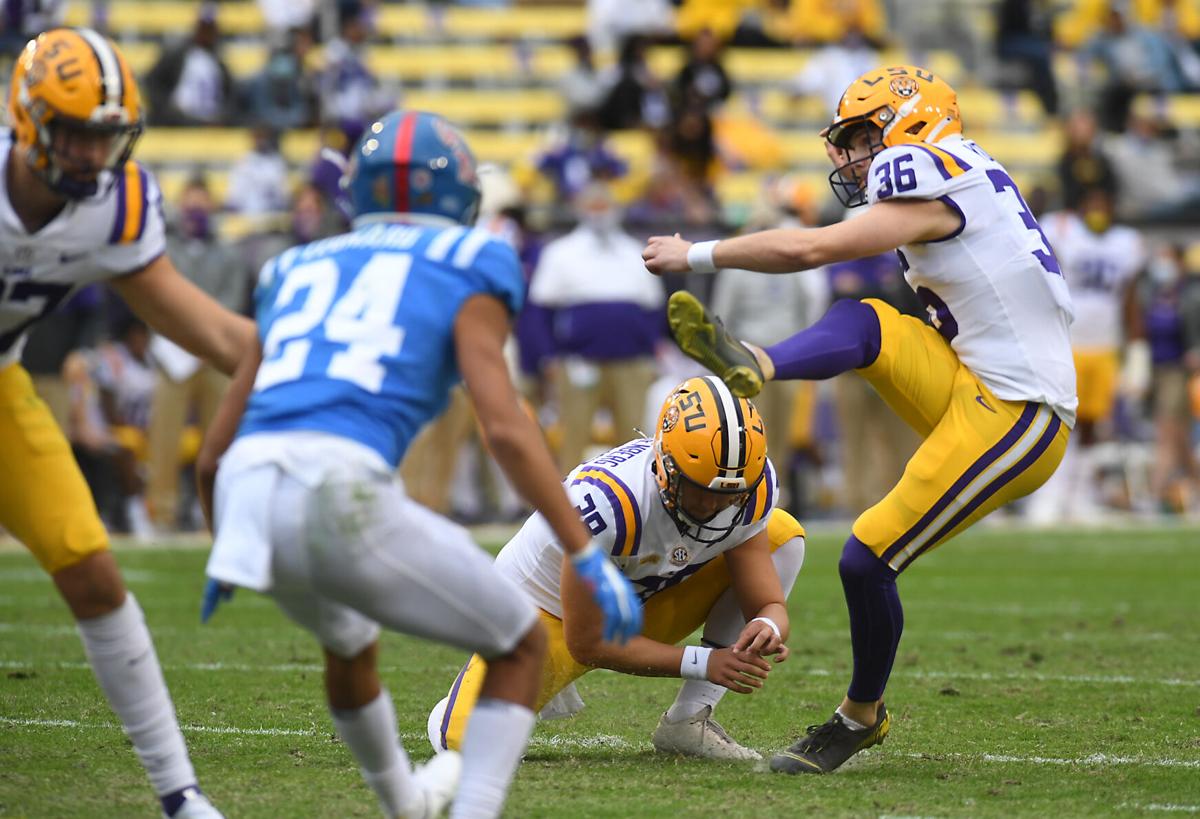 LSU's Cade York kicks a short field goal in the first half against Ole Miss on Dec. 19, 2020 in Tiger Stadium.

LSU's Cade York kicks a short field goal in the first half against Ole Miss on Dec. 19, 2020 in Tiger Stadium.

There's a small target there in the distance. See it? Look through Cade York's eyes in a lasting memory. Peer from the Florida 39-yard-line inside Ben Hill Griffin Stadium, through the blinding fog, as a twirling football travels 57 yards for the game-winning field goal in one of LSU's most dramatic upsets.

That classic kick defines York's career so far in Baton Rouge. It's the first highlight in what showcases a strong and accurate place-kicker who has made 10 of 12 of field-goal attempts that were 50 yards or longer.

The long-range accuracy comes down to one of York's core philosophies.

Just about everyone knew the 6-foot-1, 198-pound Texas native could make the long kicks. A top-rated recruit out of Prosper High School, York drew national attention when he made a 59-yard field goal in the Under Armour All-America Game.

It's the medium range kicks that have given York trouble in his past two seasons, and, as LSU finishes its third week of spring practice, he's been refining the techniques that helped him improve from 5 of 10 from 40-49 yards as a freshman to 3 of 4 from the same distance as a sophomore.

LSU's special teams members have been intensely detail-oriented in the three seasons since Greg McMahon was promoted to full-time special teams coordinator. Just last week, kickoff specialist Avery Atkins shared with reporters that the team's long snappers have been training with strength coach Tommy Moffitt to cut their snapper-to-punter timing from 0.80 seconds (a good snap) to 0.73 seconds on average.

York said he noticed in a recent film study that he was approaching his kicks coming from a bad angle. He saw his body was moving too much toward the holder instead of driving into his planted foot. He was getting in his own way — like a baseball batter swinging too close to home plate — and, by moving more toward his planted foot, he gave himself more space to kick.

That's helped York improve his consistency, helped him hit what he calls his "A-ball" and "eliminate the ugly kicks" that show up every 20 or 30 attempts so he can improve his overall accuracy from 86.7% (16th nationally in 2020) up into the 90% range.

"Work toward being perfect on the season, you know?" York said.

Only one kicker in LSU history has made every field goal in a given season with a minimum of 10 attempts. David Browndyke, an All-Southeastern Conference kicker who still holds LSU's career record for most field goals made (61), converted on all 14 of his field goal attempts in 1989.

A beleaguered special teams unit made its move to consistency upon the 2018 arrival Cole Tracy, a Division II graduate transfer whose often automatic kicks were so reliable that LSU coach Ed Orgeron later admitted the team was less aggressive in opposing territory that season because they knew they could count on a consistent three points.

Tracy's legacy is rooted in his game-winner against Auburn, a kick that moved 200 LSU fans to donate more than $14,000 to his alma mater Assumption College out of gratitude. York now has Florida, a kick he says hasn't changed his life outside of football "too much" because the ongoing coronavirus pandemic limits his personal contacts within the football operations building, the classroom and at home.

"It was definitely a boost of confidence for me and my kicking game," York said, adding that it contributed to his four-field goal performance in LSU's season-finale victory over Ole Miss.

Production lends to credibility. Credibility lends to leadership. And, suddenly, York finds himself a leader in the special teams room after two years of being one of the significantly younger players in the unit.

York is 10 years younger than Zach Von Rosenberg, LSU's 30-year-old former punter, who is entering this year's NFL draft. Atkins, 21, is now the oldest player on special teams — a fact he found "crazy" after getting used to having guys like Tracy, Von Rosenberg and former long snapper Blake Ferguson around as mentors.

"It's happened really fast," Atkins said. "With Cole, with Blake, with Zach, they just teach you so many things. Specifically Blake, who was like a mentor to me coming up in the past couple of years. Really just lead by example and the rest of the guys will follow."

Atkins, the 5-foot-11, 214-pound senior, built a reputation as a powerful specialist whose kickoffs went for touchbacks 86% of the time in his first two seasons, sometimes ending up in the first two rows of stadium seating. Atkins' touchback percentage dipped to 76.67% in 2020, which he's attempting to improve this season.

This spring, Atkins is also competing for the role as LSU's starting punter along with early enrollee Peyton Todd, a West Monroe graduate who was the nation's top-rated punter in the 2021 recruiting class, according to 247Sports.

York, a former top recruit himself, said Todd has "a lot of raw talent." Todd is a 6-6, 218-pounder who became West Monroe's starting punter as a sophomore and also played linebacker. York said he's already made significant improvements since arriving on campus. They've worked with him in film study, York said, smoothing his technique and making him "less robotic."

"You'll see an exponential improvement in him," York said. "He's only been doing it seriously for two or three years, so double that time while he's here and you're going to see some insane improvements. ... He's going to be an impressive punter."

But will this new leadership within LSU's special teams have the same charisma as before? Will they be as vocal as Ferguson or as Von Rosenberg, whose social media presence often included trolling Texas A&M fans?

"I don't know if anybody's going to take over that Twitter world that Zach lives in," Atkins laughed. "I think that's a realm for himself."

Still, Atkins and York have embraced the same aim-small, miss-small attention to detail that's improved their unit significantly in recent years. And there's still enough camaraderie behind the scenes to keep them bound together.

"We've grown so much more as a football team that people are enjoying themselves, being with each other and I think that'll lead to success," Atkins said. "If you love who you're playing with, fight with who's standing next to you, I think the sky's the limit."

Is Ja'Marr Chase the NFL draft's No. 1 receiver? He 'surprised' himself with impressive pro day

The star wide receiver stepped forward after a year away from the game. NFL scouts clicked their pens inside LSU's indoor practice facility, s…