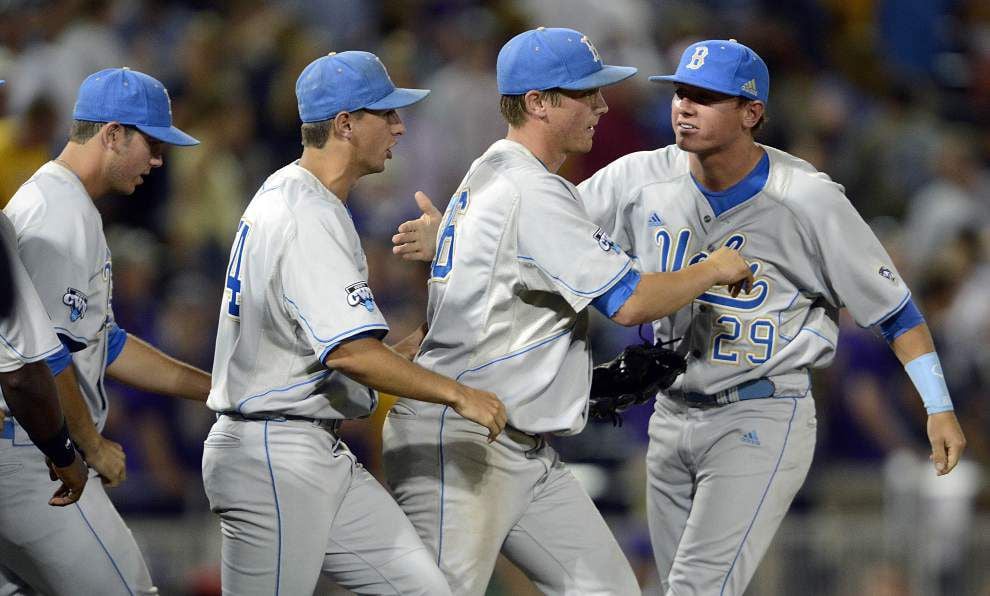 Advocate file photo by BILL FEIG -- UCLA's Ty Moore (29) congratulates teammate David Berg (26), who closed out a 2-1 win over LSU in the 2013 College World Series. The Bruins went on to win their first championship. 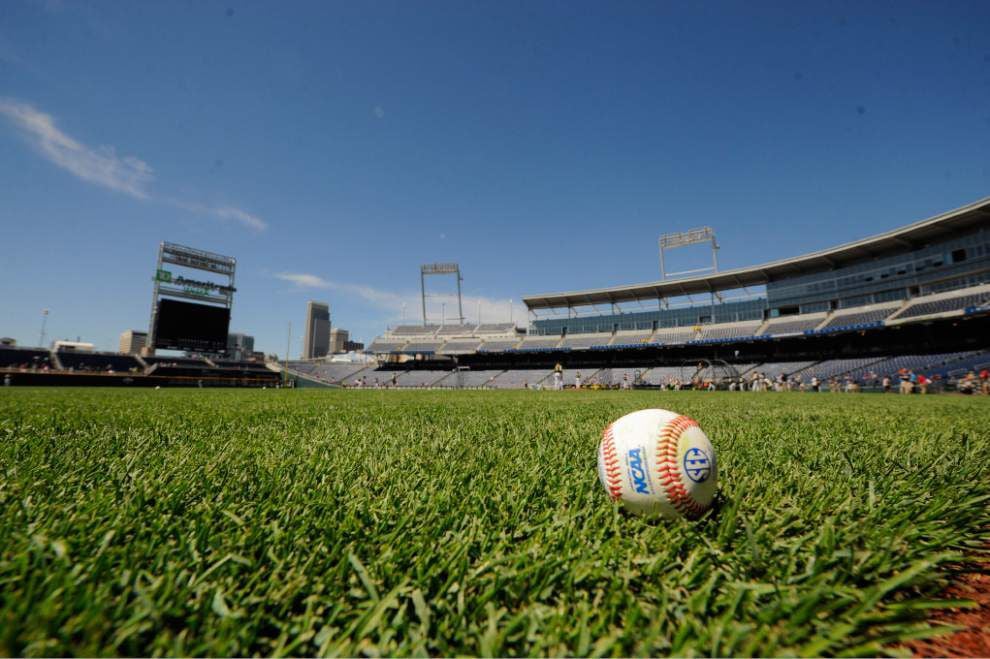 Advocate file photo by BILL FEIG -- UCLA's Ty Moore (29) congratulates teammate David Berg (26), who closed out a 2-1 win over LSU in the 2013 College World Series. The Bruins went on to win their first championship.

Skip Bertman warned Andy Lopez nearly 20 years ago to get out of the business of college baseball.

“Things are going to change,” Bertman told Lopez, then coach at Florida and now at Arizona.

When Lopez brought Arizona to the College World Series in 2012, he thought back to that 1998 conversation with LSU’s hall of fame coach.

“Here’s when I knew things were different,” Lopez said recently. “We show up in Omaha, and there’s Stony Brook. I’m going, ‘Really? What? What?’ ”

The landscape of college baseball has changed drastically over the past several years, and winning a national championship is tougher than ever.

Talent is spread as thin as ever, and mid-major teams aren’t just pulling midweek upsets — they’re getting to Omaha.

Why is all of this happening?

Restrictions in 2009 on scholarship distribution and roster size are at the heart of the matter, multiple coaches and others around the sport said.

“When the roster stuff was put in, I knew it was going to change college baseball dramatically,” LSU coach Paul Mainieri said.

Eight teams have made their first appearance at the College World series since the roster changes were implemented in 2009, a span of six World Series events.

And those consecutive championships from Oregon State (2006-07) and South Carolina (2010-11)? They were done by teams that had not previously won national titles.

Are dynasties over in college baseball? Yes, most said.

“I don’t want to say it will never happen,” said Kendall Rogers, a national baseball reporter for D1Baseball.com, “but the day we see it happening consistently is over.”

LSU won five titles in a 10-year span ending in 2000, and Southern California and Arizona State combined for 15 championships in a 24-season span ending in 1981.

At the center of the sport’s metamorphosis from dynasty-driven to parity-filled are NCAA restrictions on roster size and scholarship distribution, policies that — seven years later — still have baseball coaches scratching their heads.

There was one more change made: No scholarship player could receive less than 25 percent of a full scholarship, a stunning tweak that sent coaches scrambling.

Not only were coaches now banned from having more than 35 players on their roster. They could no longer offer players a 1, 2, or 5 percent scholarship, something done often to woo a player to college.

Jones can’t divide his 13. Mainieri can but, before 2009, he could divide those 11.7 into partial scholarships however he saw fit. Now he’s restricted to dividing them by no more than 25 percent of a scholarship and to just 27 players on a roster of 35.

“It’s hard enough to put a team together on 11.7 scholarships,” he said. “Now you’re telling me how I have to spend my money and how many people I can spend it on?”

The NCAA adopted the rules to reduce a high transfer rate and poor Academic Progress Rate scores. It has accomplished that, said Damani Leech, managing director of championships and alliances for the NCAA overseeing baseball.

“It was all geared to a more stability in college baseball,” he said.

It’s done something else.

For one, powerhouse programs can’t stack their rosters with a plethora of players receiving 1 to 5 percent of a scholarship — an amount known in baseball circles as a “book scholarship” because it covered a student’s textbook fees.

Mid-major programs are getting highly recruited players who normally would have attended a major program on a small percentage of a scholarship. Now that these major schools must offer at least 25 percent and have just 35 spots, the Stony Brooks of the world are grabbing a handful of top players.

“Because of allotment of scholarship money and roster sizes, you get talent more evenly spread out than in years past,” said Tim Corbin, who guided Vanderbilt to a national championship last year.

Lopez had a mid-major school steal an in-state walk-on in 2011 — a prime example of just how these NCAA roster and scholarship restrictions help the little guys and hurt the big guys.

“About three weeks before school starts, he calls me up and says, ‘Hey, Coach, I just got offered 35 percent (scholarship at a mid-major). Can I get 25 percent (from you)?’ ” Lopez said, remembering the conversation with the prospect he declined to name.

Before 2009, Lopez could have easily found 5 percent or maybe even 10 percent to entice the kid to join the Wildcats. So where is this prospect now?

He’s at that mid-major school and ...

“That kid that used to take a book scholarship to go to LSU,” Mainieri said, “is now turning down LSU — either because he’s not getting any scholarship money or there’s not a spot in a roster of just 35 — and he ends up going to a mid-major.

“The minimum scholarship requirement has limited opportunities for kids to go to the school they’d really like to go to,” Mainieri said.

The strategic management of scholarship monies is something coaches take seriously. Mainieri, for instance, keeps a spreadsheet on his computer with each players’ scholarship situation.

He declined to reveal how much of a scholarship certain players are receiving, but the coach said no one has ever received a full scholarship in his nine years in Baton Rouge.

The most any LSU player is currently receiving is about 70 percent, the coach said. About 65 percent equates to the full cost of tuition for an out-of-state student. The player must pay his own textbooks and room and board — things a full scholarship covers.

At Arizona, preseason All-America infielder Kevin Newman is receiving 68 percent of a full scholarship, Lopez said. That’s the most any Wildcats player gets.

“To try to hit the nail on the head and have 27 guys on scholarship, 35 on your team, give everybody a minimum of 25 percent (scholarship) on just 11.7 scholarships and have a team good enough to win a national championship,” Mainieri said, “it takes a lot of creativity.”

Roster limits are specifically devastating for teams hit with a wave of injuries. Leech and his staff at the NCAA hear from coaches about that.

For example, LSU has 16 position players on its roster for eight starting positions. Three of those players — at one point last week — were unavailable because of injury. That’s 13 players for eight positions.

Leech said there hasn’t been a “significant push” to revise the roster and scholarship restrictions, but there has been a push — for decades, now — to increase the number of scholarships (11.7) that baseball is allowed to offer.

“Of course you should have more,” said Bertman, who once proposed a plan for baseball to receive 22 full scholarships. “There aren’t enough scholarships to get seven or eight or nine draft prospects.”

A proposal was made in 2007-08 to increase the number of scholarships to 15, Mainieri said. “At the bottom of the ninth inning,” the coach said, the NCAA pulled the plan.

Increasing the total of scholarships is something the NCAA is hesitant on changing because of this, Leech said: Only about half of Division I baseball teams offer the full 11.7 scholarships.

“By moving the number up, we’ve got to understand the impact on parity,” he said.

Roster limits and scholarship restrictions aside, winning it all in the modern day of college baseball starts on the mound, coaches said and statistics prove. The post-“gorilla ball” days have forced coaches to spend more scholarship money on pitchers than any other position.

Four of the past five national championship teams had ERAs ranked in the top 25 nationally, including three in the top seven. Lopez’s Arizona team in 2012 was the outlier, a more offense-centric team that won it all.

“The pitching is probably the most important component, followed by the defense and then it moves to the timely hitting,” Corbin said. “Run prevention, particularly in (T.D. Ameritrade Park), is paramount.”

The power-hitting dynasties of the 1990s and ’80s are gone. And so are the unlimited roster sizes and scholarship freedoms.

Yes, a lot has changed in college baseball.

The recent champs, by the numbers

How did the last five national champions win their titles? Aside from Arizona, they did it with pitching.: