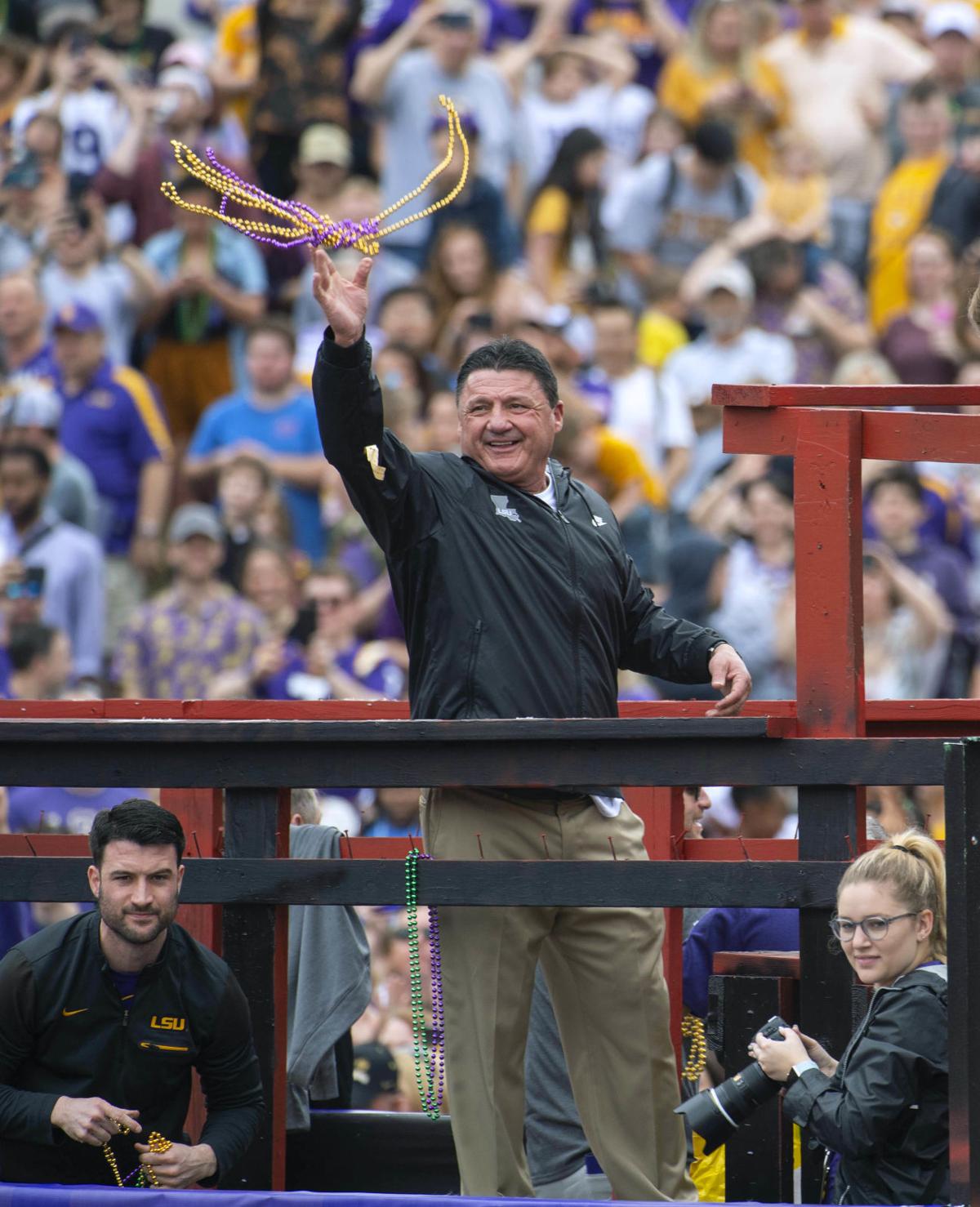 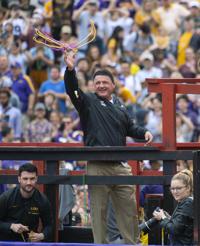 Head coach Ed Orgeron throws strands of beads out to the crowd as his float comes down victory Hill on Saturday, Jan. 18, 2020, at the parade and celebration at the Pete Maravich Assembly Center marking LSU's 42-25 national championship win in football over Clemson. 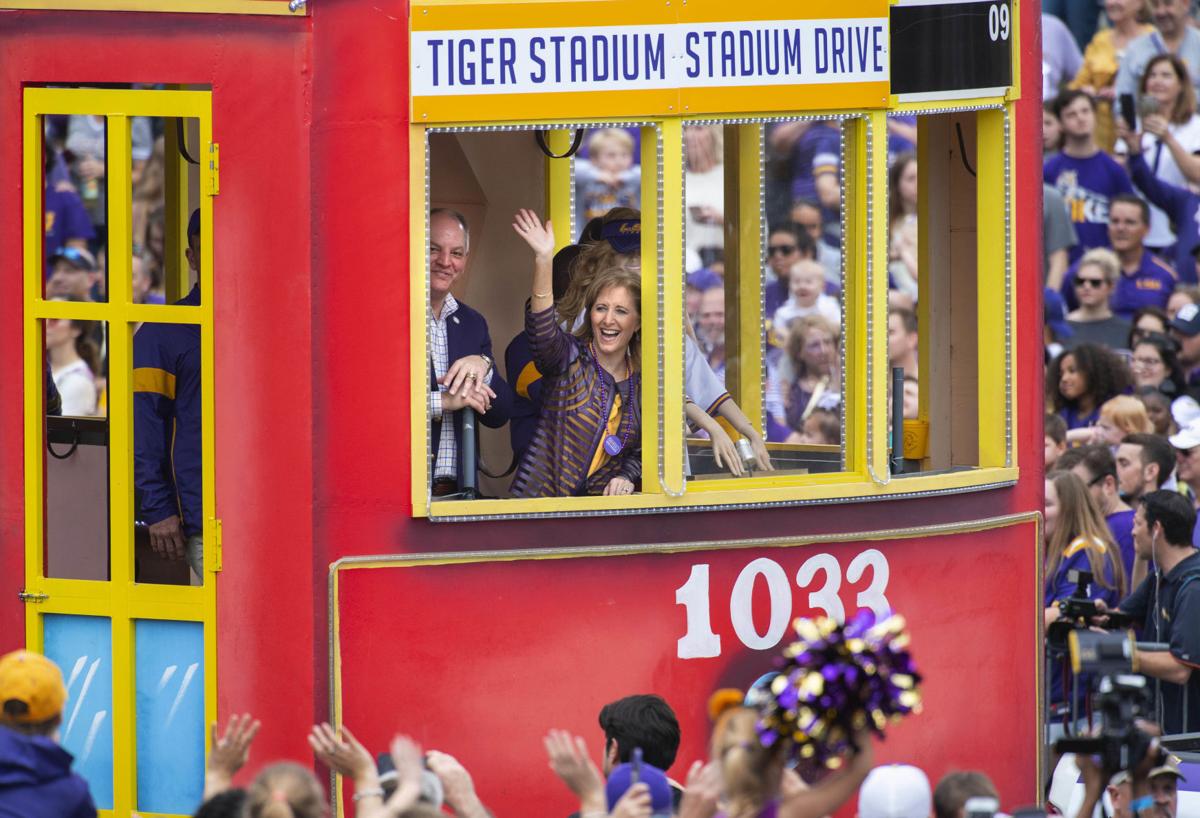 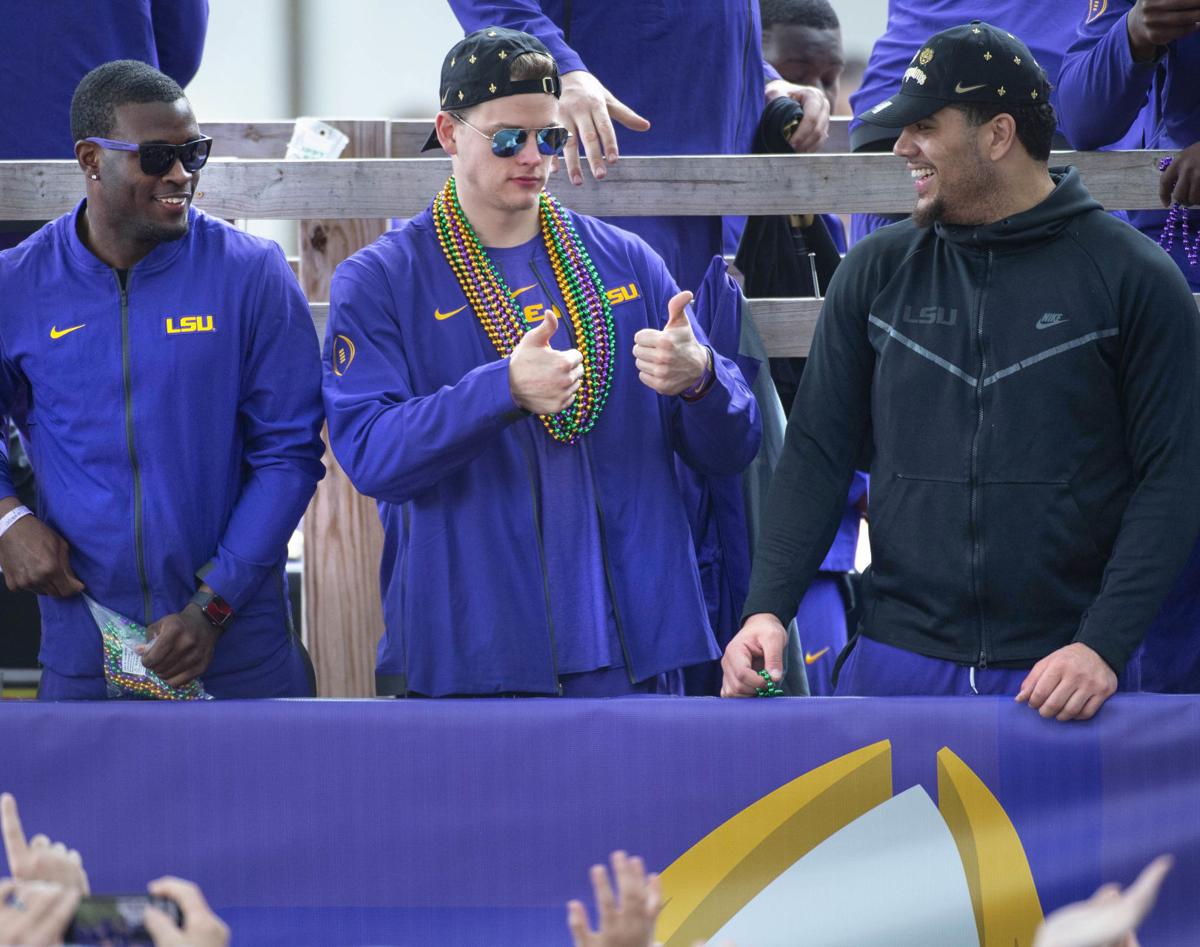 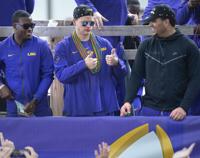 Quarterback Joe Burrow, center, the winner of the Heisman Trophy, gives a thumbs-up to the crowd as a players float comes down Victory Hill on Saturday, Jan. 18, 2020, at the parade and celebration at the Pete Maravich Assembly Center marking LSU's 42-25 national championship win in football over Clemson. 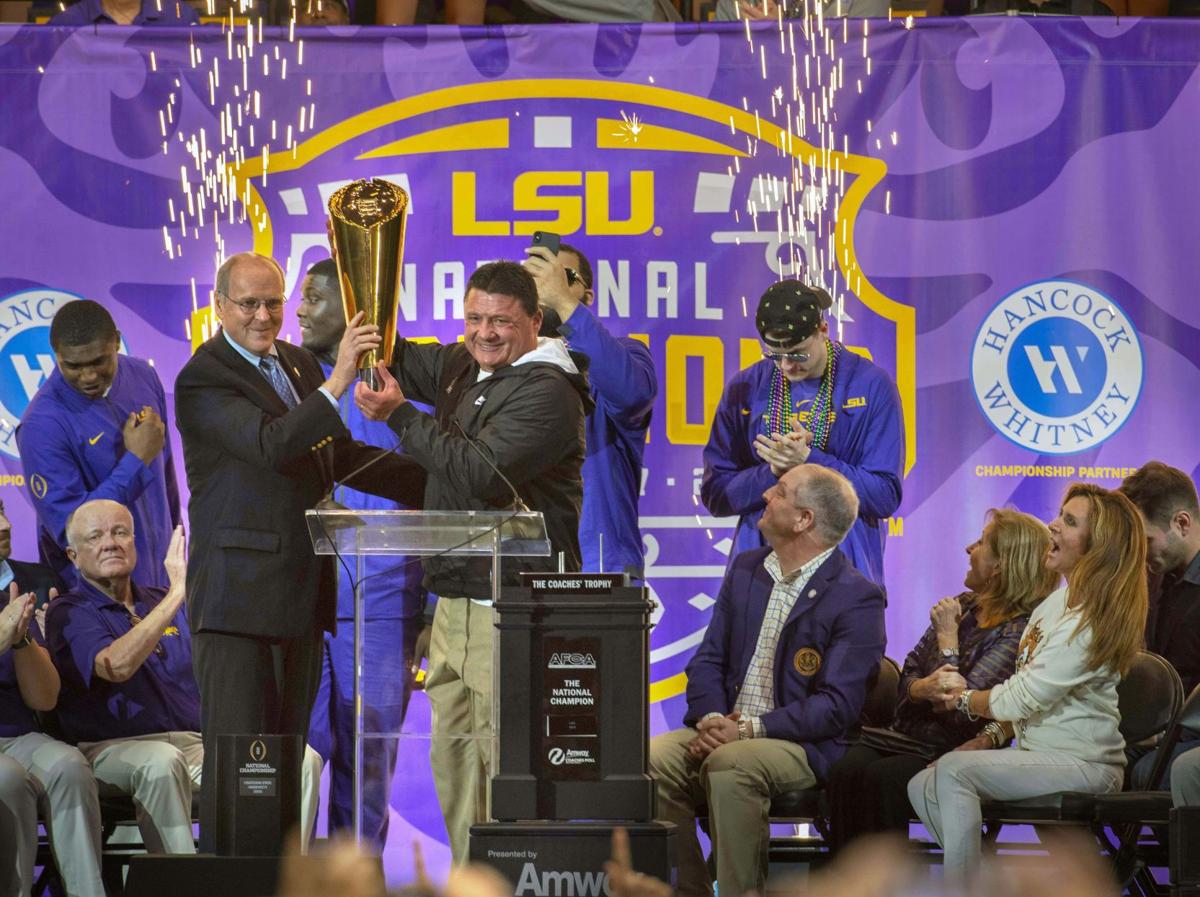 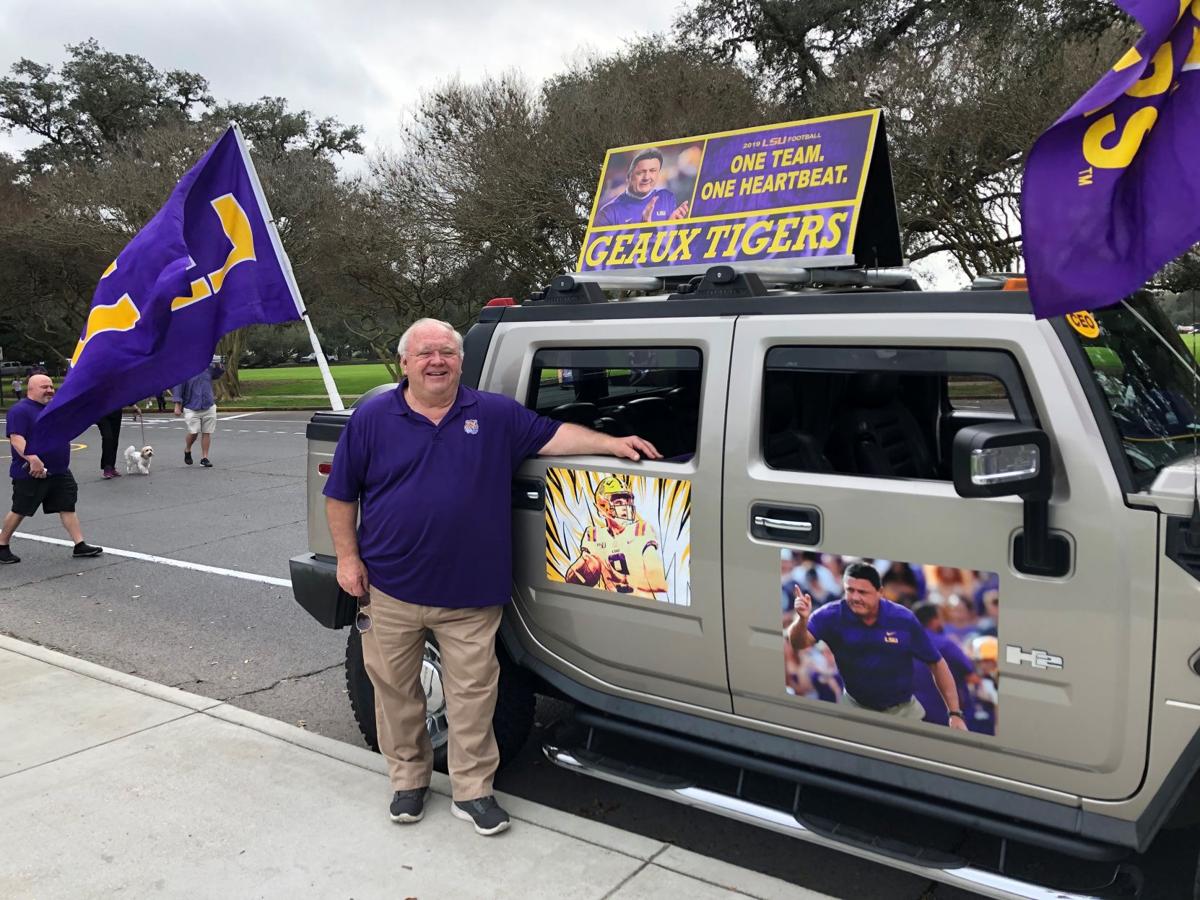 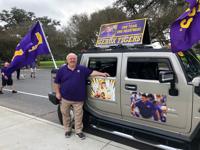 Larose resident Brent Duet stands next to his LSU decorated Hummer. Duet attends the same church as Ed Orgeron's mother, Coco, and was supposed to drive her to the parade in the Hummer until plans changed. 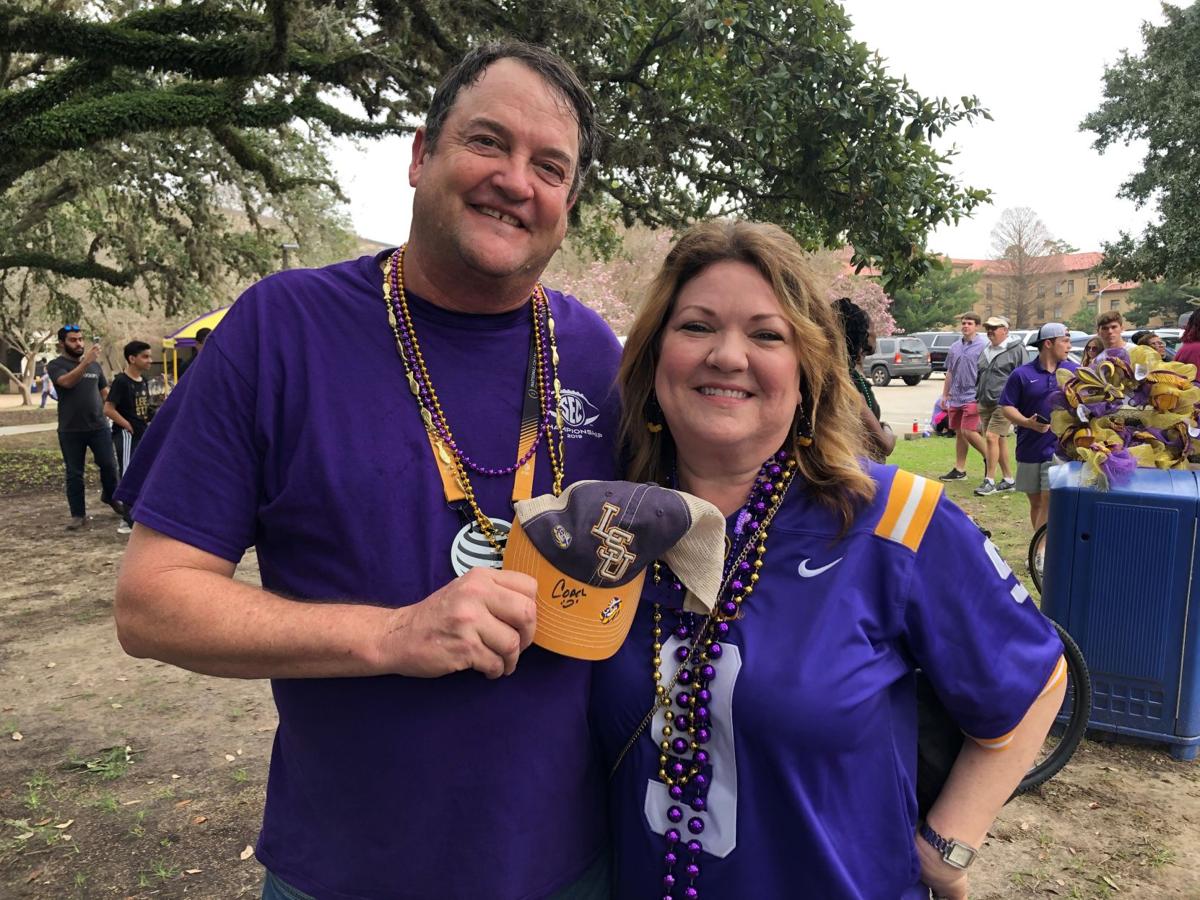 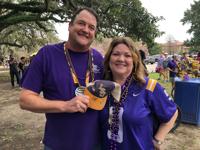 Head coach Ed Orgeron throws strands of beads out to the crowd as his float comes down victory Hill on Saturday, Jan. 18, 2020, at the parade and celebration at the Pete Maravich Assembly Center marking LSU's 42-25 national championship win in football over Clemson.

Campus filled on the morning of the parade, the first of its kind in over a decade.

People leaned against the railings on Dalrymple Drive to catch a glimpse of the national champions, the LSU football team, fresh off a visit to the White House in Washington, D.C.

Fans cried out from under the oak trees, standing in the mud on a humid Saturday morning. A mother balanced her daughter atop a trash bin for a better view. A student wearing a beer carton as a hat shouted at the parade floats as they passed.

And there was Ed Orgeron, standing at the front of the first float like a riverboat captain, flinging cups and beads and fake cigars.

It was a football Mardi Gras, and the LSU coach was the Grand Marshal of the Krewe of Tigers.

The festival began Monday night, when LSU recovered from a two-score deficit to pound Clemson 42-25 in the College Football Playoff National Championship Game, a comeback victory in the Mercedes-Benz Superdome that gave the program its fourth title.

The players smoked cigars in the locker room. They danced in the White House. And now, they looked out from parade floats, living in a party that seemed to go on and on.

The mascot, Mike the Tiger, wore a goat outfit — a clear message that said this team was the G.O.A.T. (greatest of all time).

Interim LSU president Tom Galligan would say as much later in the day: No team in college football history has accomplished what LSU did this season. The Tigers were the first to defeat the top four teams in the preseason Top 25 (Clemson, Alabama, Georgia and Oklahoma), and LSU beat seven top-10 opponents among its record 15 victories.

Much of the success was because of the quarterback, who Saturday wore a backward championship hat, dark reflective sunglasses and a collection of purple, gold and green beads around his neck.

Joe Burrow, the Heisman Trophy winner, signed hats and shirts and newspapers on the edge of the float before the parade began. People packed together in the street, extending anything they owned to the Ohio State transfer who became Louisiana's adopted son.

A woman even held out a stick, topped with a giant hand made of paper. Just what was the hand all about? "Remember the Homecoming hand Joe did at Texas?" she said.

Before every home football game at LSU, fans gather along a sloped stretch of road known as Victory Hill, waiting to greet players and coaches…

Ah yes. The Homecoming wave. The signal Burrow gave to the crowd in Austin, Texas, shortly after his third-and-17 touchdown pass to Justin Jefferson led LSU to a 45-38 win over the Longhorns.

That victory was referenced many times by coaches and players. It was the moment LSU knew it had arrived. The Tigers were on to greater and grander victories, and Burrow was on his way to unreachable heights.

Burrow's 5,671 yards passing crushed the single-season school record set by Rohan Davey in 2001 (3,347). His 60 touchdown passes are the most in one year in NCAA history. He won the Heisman by the widest margin in the trophy's 84-year history.

"What adjectives are left to say about it?" former LSU quarterback Matt Flynn said inside the Pete Maravich Assembly Center, where a celebration was waiting after the parade.

A representative from every LSU football championship team shared the stage at the PMAC during the celebration: Quarterback Warren Rabb (1958). Running back Justin Vincent (2003). Flynn (2007).

Rabb pointed endearingly at Burrow when they were introduced.

"As far as I'm concerned, he's the best ever," Rabb said. "I wanted him to know that I felt like that about him."

Rablais: In the argument of greatest college team ever, LSU emphatically states its case

It began with an audacious promise from a still unheralded quarterback of an untried offense: The team would score 40, 50, even 60 points per game.

Everyone inside a packed PMAC had the chance to show how they felt. The free-admission event filled like a sellout. The crowd boomed when Orgeron and the team entered.

Chants of "L-S-U" repeated again and again as Mayor Sharon Weston Broome handed Orgeron a key to the city; as Orgeron tucked the AFCA Coaches' Trophy — a crystal football — under his arm like a running back and returned to his seat; as he stood at the podium again, thumping its surface, fighting back tears at the end of his speech.

"I couldn't be more proud to be in the state of Louisiana," Orgeron said, choking out the words. "(Geaux) Tigers."

LSU tight end Thaddeus Moss has declared early for the NFL draft, closing out a collegiate career that began at North Carolina State and ended…

The Larose native has brought his home state team back to the summit of college football and will soon face the challenge of maintaining success.

Among the few who weren't able to make it to the celebration Saturday was Orgeron's mother, Coco.

Larose resident Brent Duet, 71, parked his Hummer behind the parade. Duet said he was supposed to drive Coco to Baton Rouge, but her back was aching a bit, and she couldn't make it. The families attend church together, and Orgeron's brother, Steve, used to be a welder at Duet's shipyard.

Had the trip worked out, it would have been a sight to see, and it just might have fit right in the parade: Coco in the passenger seat of a Hummer with pictures of Orgeron and Joe Burrow on the sides, LSU flags flying on both ends, a sign that read "One Team, One Heartbeat" on the top.

But a celebration is still coming, Duet said.

Duet was on the "Coach O Day" committee, the group that organized a hometown celebration at the Larose Civic Center on Feb. 17, 2017 — when Orgeron was first hired for the full-time job at LSU.

There will be another "Coach O Day," Duet said.

Orgeron has given them two undisclosed dates, and the timing will be finalized soon.

Duet said it'll probably have to be held at the South Lafourche High football field, because they can't have more than 1,500 people in the civic center pavilion.

Oh, the celebration's just getting started, just as LSU public-address announcer Dan Borne reminded at the end of the ceremony.

In a week filled with departures, a member of LSU's coaching staff turned down an opportunity to leave campus.

K'Lavon Chaisson has declared early for the NFL draft, closing out a career at LSU where the outside linebacker battled through injury and hel…

LSU's JaCoby Stevens announces he is returning for senior season; 'Hold That Tiger!'

After a long string of departures, LSU received news that one of its most crucial defenders is returning for his senior year.