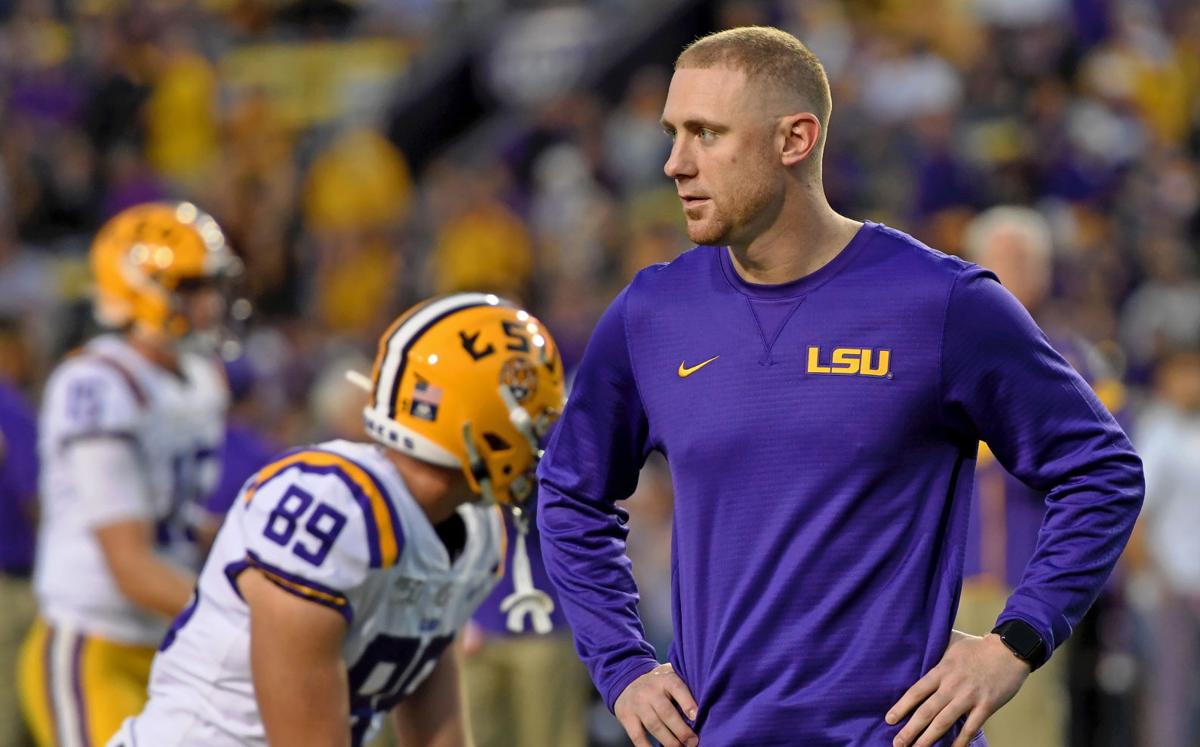 LSU passing game coordinator Joe Brady looks over the receiving corps during warmups before the first half of LSU's football game against Florida at Tiger Stadium Saturday Oct. 12, 2019, in Baton Rouge, La. 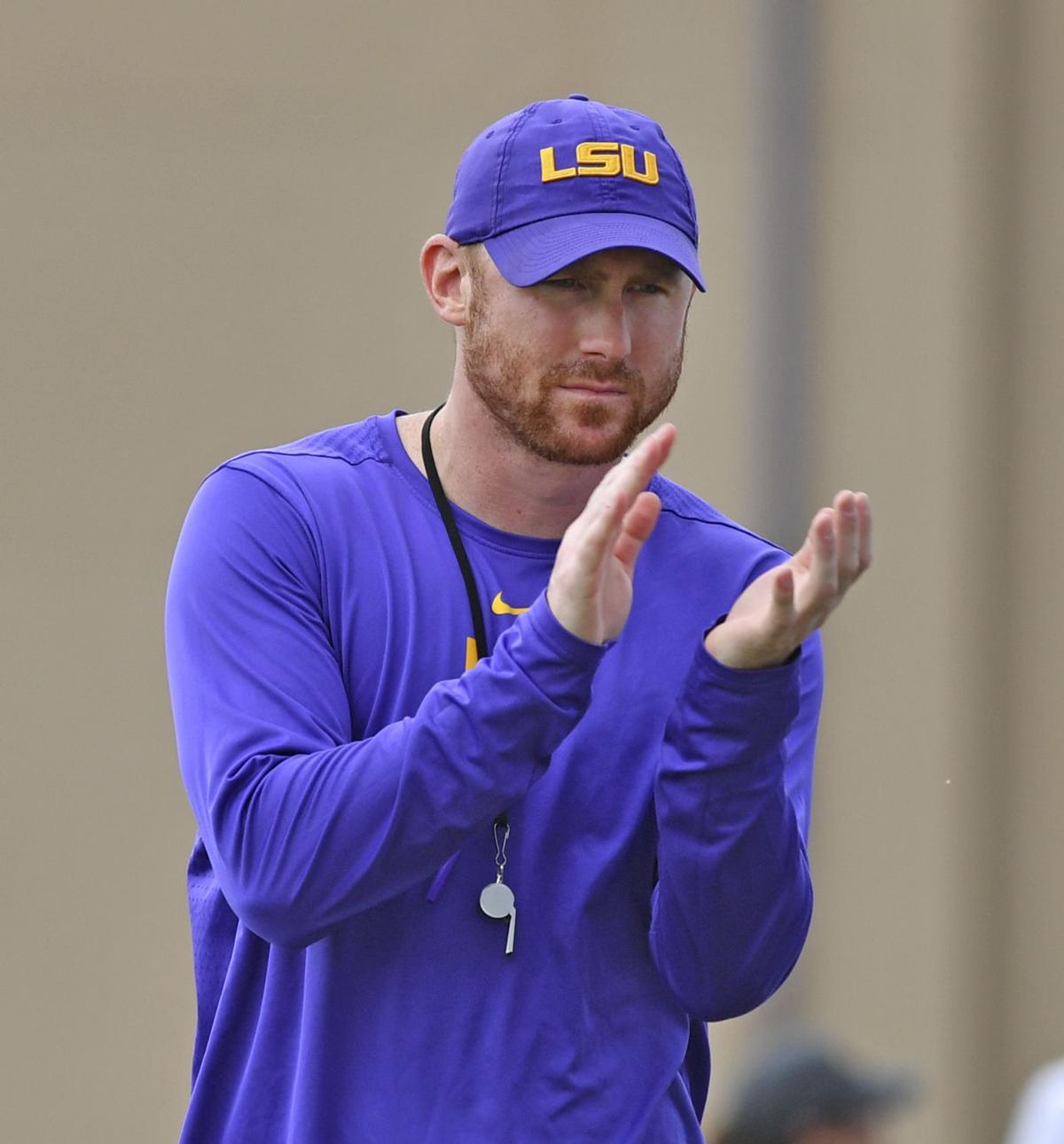 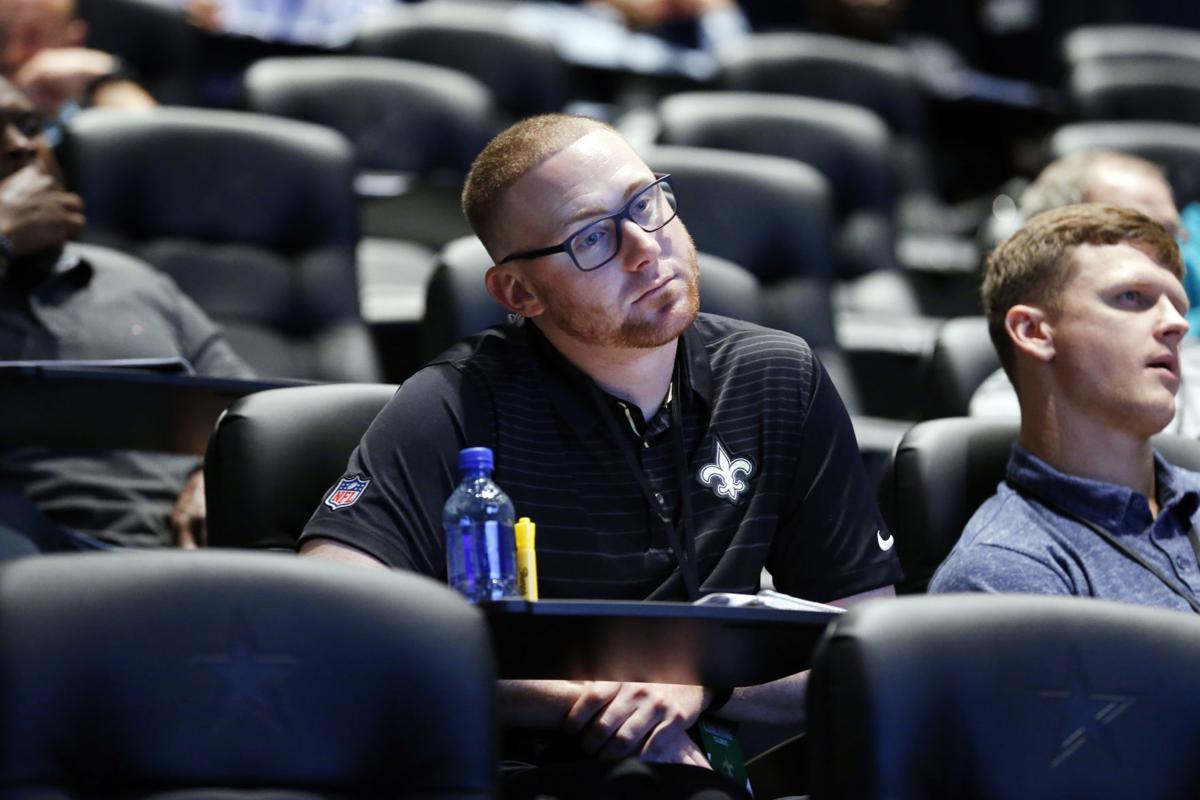 LSU passing game coordinator Joe Brady looks over the receiving corps during warmups before the first half of LSU's football game against Florida at Tiger Stadium Saturday Oct. 12, 2019, in Baton Rouge, La.

Kevin Rogers watched his former pupil's plays from his chair in Williamsburg, Virginia, and the retired football coach knew he was seeing something familiar.

An LSU wide receiver charged toward a defensive back, turned outside looking for the ball over his outside shoulder, then cut back underneath toward the middle of the field.

The route was straight out of the West Coast offense, which Rogers ran as the offensive coordinator at William & Mary — back when LSU passing game coordinator Joe Brady was an assistant on the Tribe's staff from 2013 to 2014.

Looked like the kid Rogers once called "Joey" had picked up a thing or two.

LSU positioned a tight end on one side of the field, then placed three wide receivers on the other. On the ball's snap, the three receivers ran layered crossing routes toward the middle of the field, each receiver running deeper than the first.

Well how about that? Brady had been listening.

The camera flickered to the coaches booth in Tiger Stadium, and there Brady was, on national television, helping direct LSU's record-breaking offense in a 42-28 win over Florida with concepts he picked up from his past.

Rabalais: Is Mississippi State a trap game for LSU? Here's why the Tigers won't fall for it

Shoot, Brady was perfecting those concepts — just as he'd studied them late into the night in dimly-lit coaching offices as a linebackers coach in Williamsburg, as a graduate assistant at Penn State, as an offensive assistant with the New Orleans Saints.

Rogers had it easy as far as Brady's mentors go.

Now a color commentator for William & Mary football radio broadcasts, Rogers could watch Brady from the security of his home.

"It's probably advantage Brady," said Rogers, a former offensive coordinator at Notre Dame from 1999 to 2001. "Just because he's going to be able to explain everything they've been doing to their defensive staff at the same time."

The next part of LSU's pass rush? Freshman Marcel Brooks 'at home' playing outside linebacker

It was that attention to detail that made it easy for Rogers to recommend Brady to his old colleague, Ed Orgeron, who worked with Rogers at Syracuse in the late 1990s.

Orgeron had seen Brady's promise himself. He invited part of the Saints offensive coaching staff to give a presentation in Baton Rouge in the summer of 2018, and Brady impressed the entire LSU coaching staff with his command of schemes.

So, when former passing game coordinator Jerry Sullivan retired in January, Orgeron hired the up-and-coming Brady — just months away from his 30th birthday — to a three-year, $400,000 per year contract to rebuild the LSU offense in tandem with coordinator Steve Ensminger.

Combine Brady's salary with Ensminger's ($800,000 per year), pair it with LSU's results, and Orgeron probably has the greatest bargain in college football.

Moorhead said he and Brady have exchanged congratulatory texts throughout the season.

Mississippi State has lost three of its last four games; but the 45-year-old Moorhead knows what it's like to be a part of an offense that's capturing the nation's attention and setting records.

As the offensive coordinator at Penn State from 2016-17, Moorhead's offenses averaged 39.4 points per game and boosted the Nittany Lions to a 22-5 combined record with appearances in the Rose Bowl and Fiesta Bowl.

That's when the job is "very gratifying," Moorhead said Wednesday, when the staff room is in rhythm and the plan is right, when the system is unstoppable and the scheme and personnel are the perfect blend of subject and medium.

Orgeron has said this year's offense is what he's envisioned since he became head coach midway through the 2016 season — an offense tailored to the talented skill players the program has regularly hauled in on the recruiting trail.

"That means we'd have to take out Justin Jefferson or Ja'Marr Chase," Orgeron said, "and we're not ready to do that yet."

LSU's defense has depth, the answer to staying fresh with an up-tempo, spread offense

Burrow said "everything was kind of clicking" against Florida. He'd line up behind-center, check the alignment of the defense and see that the play call was exactly as it should be. He'd return to the sideline, slide on a headset and hear Ensminger and Brady say: Just do exactly what we're doing. They can't really stop us right now.

And that brings up a root question: Just who is calling LSU's plays?

Orgeron has said that it's a collaboration.

He's repeatedly called Ensminger "the general" up in the booth, which would make Brady somewhat of a lieutenant; but Orgeron said "a good general is going to let smart people do some stuff, and Joe Brady is talented, smart."

Before the season opener against Georgia Southern, Orgeron said Ensminger would call the plays, and after LSU's Week 2 win over Texas, Orgeron also said Brady calls them.

Sometimes, Orgeron said, Burrow calls the plays because he "knows the adjustments as well as any other coach."

It's a question rooted in credit, and Brady was quick to dismiss any notion that any success would ultimately be his.

"Sometimes it's like, 'Is it Steve's offense? Is it Joe's offense?'" Brady said in June, the last time he spoke with media. "This is our offense. We're all in this together."

LSU's found security in its running backs at the right time; 'They understand what we need to do'

Orgeron said he saw a similar working relationship when he was defensive line coach at Southern Cal — back when Norm Chow was the offensive coordinator, Lane Kiffin was the tight ends/wide receivers coach and Steve Sarkisian was the quarterbacks coach.

The Trojans won the 2004 national championship and made claim to the AP title in 2003 (LSU, of course, won the BCS championship in ’03), and Kiffin (Florida Atlantic head coach) and Sarkisian (Alabama offensive coordinator) are still in the business after multiple head coaching stints.

"It can work together," Orgeron said. "But I think you have to have the right mindset."

That lesson for Brady dates back to Jimmye Laycock, who retired last year after 39 years as the head coach of William & Mary, producing one of the most impressive coaching trees with future NFL coaches like Mike Tomlin (Pittsburgh Steelers), Dan Quinn (Atlanta Falcons) and Sean McDermott (Buffalo Bills).

Laycock, an offensive coordinator at Clemson from 1977 to 1979, said he ran the offense at William & Mary until he decided he needed to give it up, and he hired Rogers in 2013.

Even Rogers said he doesn't think it's "healthy to think you have all the answers." He wanted a staff that could come up with a gameplan and produce different ideas to attack the defense.

"Joe (Brady) is getting all the credit right now, and certainly deserves a lot of the credit," said Rogers, who was the quarterbacks coach with the Minnesota Vikings from 2006 to 2011. "But it's everybody that's sitting in that meeting room."

Whatever Brady's role, his influence has certainly been the catalyst for what could be LSU's push back to championship contention. Orgeron said "we needed to score more points to bring a championship to Baton Rouge," and that's the reason why he hired Brady.

"It's an offense here to stay right now in Baton Rouge," Orgeron said. "We've got to keep the same coaches, get a great quarterback, get great receivers and the offensive line's got to play well."

At this rate, Brady is bound to be getting some phone calls for other coaching opportunities, right?

Laycock has seen this all too many times, too. Brady is only the most recent branch to stretch from the coaching tree.

Laycock remembers that a rising Tomlin always called him when a new job came up. They'd talk about the team and the opportunity. But at the end, he'd always ask Tomlin the same question: Mike, are you still having fun?

Tomlin always had the same reply: Yes, I'm still having fun, coach, I love it.

"I'm sure Joey's just enjoying what he's doing right now," Laycock said. "He's having a lot of success and we'll see how things play out for him."

Rabalais: As praise mounts, No. 2 LSU Tigers can't let their heads get too big for their helmets

Last summer, Ed Orgeron and the LSU coaching staff gathered inside the Tigers football facilities for a presentation. It was to learn about th…