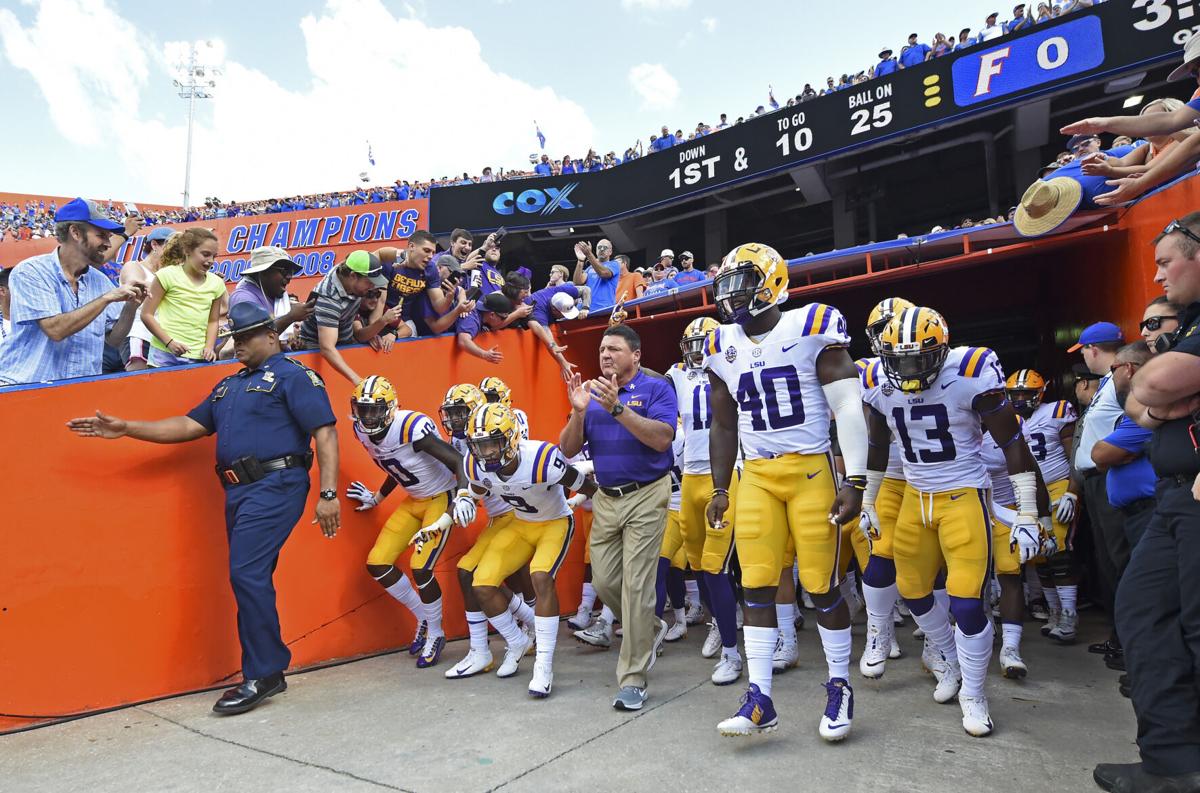 LSU coach Ed Orgeron leads his players onto the field before the Tigers' game against Florida on Oct. 6, 2018, at Ben Hill Griffin Stadium in Gainesville, Fla. 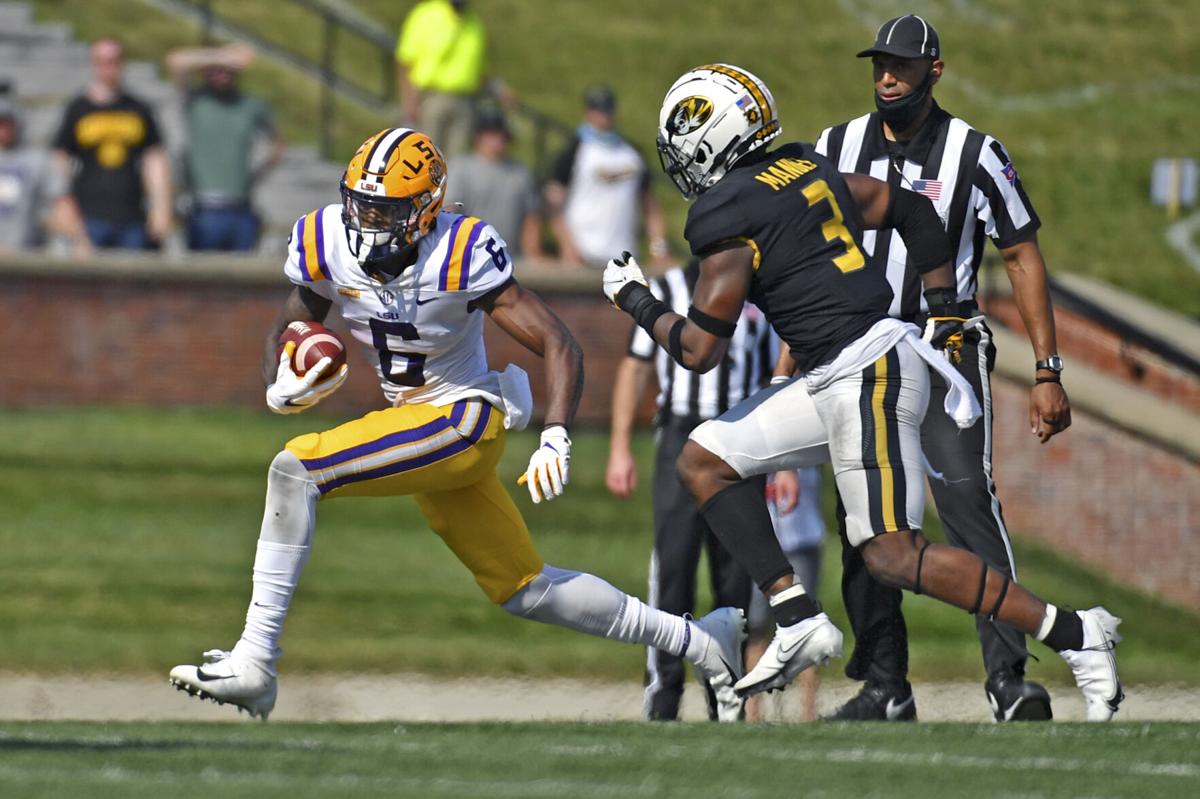 LSU coach Ed Orgeron leads his players onto the field before the Tigers' game against Florida on Oct. 6, 2018, at Ben Hill Griffin Stadium in Gainesville, Fla.

Once again, our sports news cycle has switched into up-tempo mode.

In the futile hunt for a normal football October, the 24 hours from high noon Tuesday to Wednesday has seen some unprecedented football activity.

The New Orleans Saints may be coming to Baton Rouge.

The LSU Tigers aren’t going … to Florida, at least.

Nick Saban has coronavirus. So does a large chunk of the Ole Miss football team.

And Myles Brennan may have checked himself into a whirlpool bath in the LSU football practice facility, with a wake-up call for the South Carolina game.

Whether you think this pandemic thing is a really serious problem or a bunch of hooey, the fact remains that the Southeastern Conference has run aground on its first major reef as it tries to get in a 10-game regular season before tens and tens of fans (sorry, Dan Mullen).

The SEC, to its credit, built some circuit breakers into its revamped schedule for weeks just like this. That has allowed two games slated for Saturday — LSU at Florida and Vanderbilt at Missouri — to be postponed, not canceled. They will both likely happen the weekend of Dec. 12, the open date between the new end of the regular season and the SEC Championship Game.

At the risk of being callous about Florida’s outbreak, not playing Saturday may have been the best break the Tigers have gotten so far in this strange, star-crossed season.

If Brennan, beaten up in the Missouri game and rated as doubtful by coach Ed Orgeron to play against Florida, had been unable to go, LSU would've had to give the ball to a freshman, TJ Finley or Max Johnson, for their first collegiate snaps. Even before a fractional Florida crowd in The Swamp (more on that later), that would have hardly been a winning formula for the Tigers.

Then there’s the defense. As indefensible as LSU’s defense has been in two of the Tigers’ first three games against Mississippi State and Missouri, the chance of them getting their act together quickly enough to spring an upset at Florida was also low-percentage.

In short, LSU has a better chance of being a better team in mid-December than it is right now, assuming a healthy Brennan and a healthier-looking defense that has nowhere to go but up. Barring any more COVID-19 complications, the Tigers now have time to streamline, simplify and improve the defense with more than a week to go until their next game against South Carolina in Tiger Stadium on Oct. 24.

LSU will be favored in that game, with a chance to win and build momentum going into its next game, on the road Oct. 31 against a vulnerable-looking Auburn team (I don’t care what rules the SEC tries to quote; Arkansas got shafted on that backward spike by Auburn quarterback Bo Nix).

Speaking of Mullen, he was backpedaling like Kyle Trask on a seven-step drop during a Wednesday teleconference, drifting away from his postgame statement at Texas A&M, in which he said he wanted to pack The Swamp for the LSU game.

In what qualifies for irony, in four days Florida went from a “pack The Swamp” Mullen mandate to the gates at Ben Hill Griffin Stadium being locked tight this Saturday afternoon.

The rivalry week began with a plea, a brash call for a packed crowd amid a global pandemic, and it ended, days later, when a coronavirus outbr…

Next time Florida plays at home, hopefully Oct. 24 against Missouri, a chastened Mullen won’t be pushing for a standing-room-only crowd.

“Whatever our local health officials come out to say this is the number of people we’re going to allow at the game right now, I want to encourage those people to come in, bring the energy, bring the excitement into the stadium and help our team win,” Mullen said.

Florida athletic director Scott Stricklin — a former sports information director who knows how to choose words like ripe fruit at the market — gently urged Mullen to stay in his lane.

“I had a conversation with him yesterday," Stricklin said, referring to Lauzardo. "He said, ‘Hey, since coach Mullen is now getting into public health policy, I want to know: Can I call some plays?’ I told him I’d make a deal, that going forward, Dan will focus on calling plays and we’ll let Dr. (Lauzardo) focus on public health policy.”

As for public policy, I think public pressure will have the Saints playing in front of fans in the Mercedes-Benz Superdome before they play a down in Tiger Stadium. Let’s just hope the SEC’s suddenly growing coronavirus problem won’t keep LSU from playing on its home field next Saturday.

“No one knows what the next day is going to bring,” Robert Munson, LSU’s senior associate athletic director of external communications, said Wednesday on WNXX-FM, 104.5.

Isn’t that the truth.

LSU has extra time to fix its defense. It's not the one Ed Orgeron says he saw in camp.

The postponement of LSU's game against Florida gave the Tigers extra time to improve their defense.