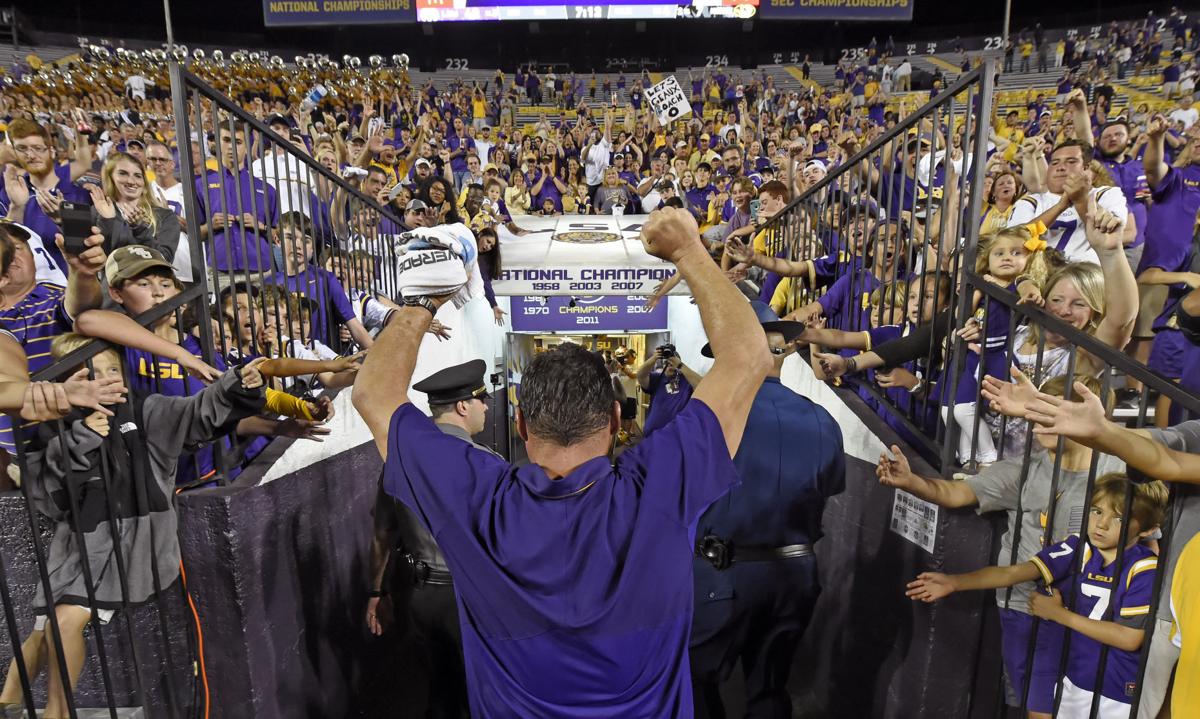 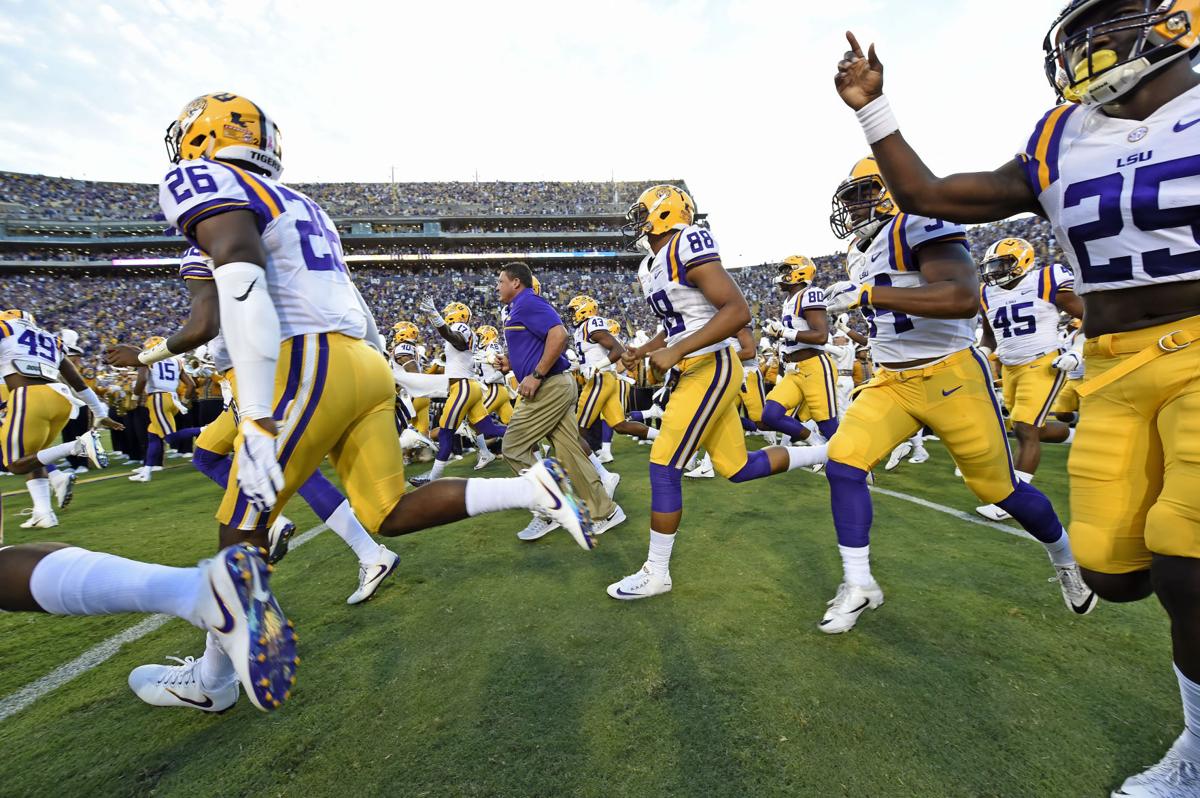 LSU interim head coach Ed Orgeron, center, leads his team onto the field for the first half of the LSU Missouri football game Saturday Oct. 1, 2016, in Tiger Stadium. 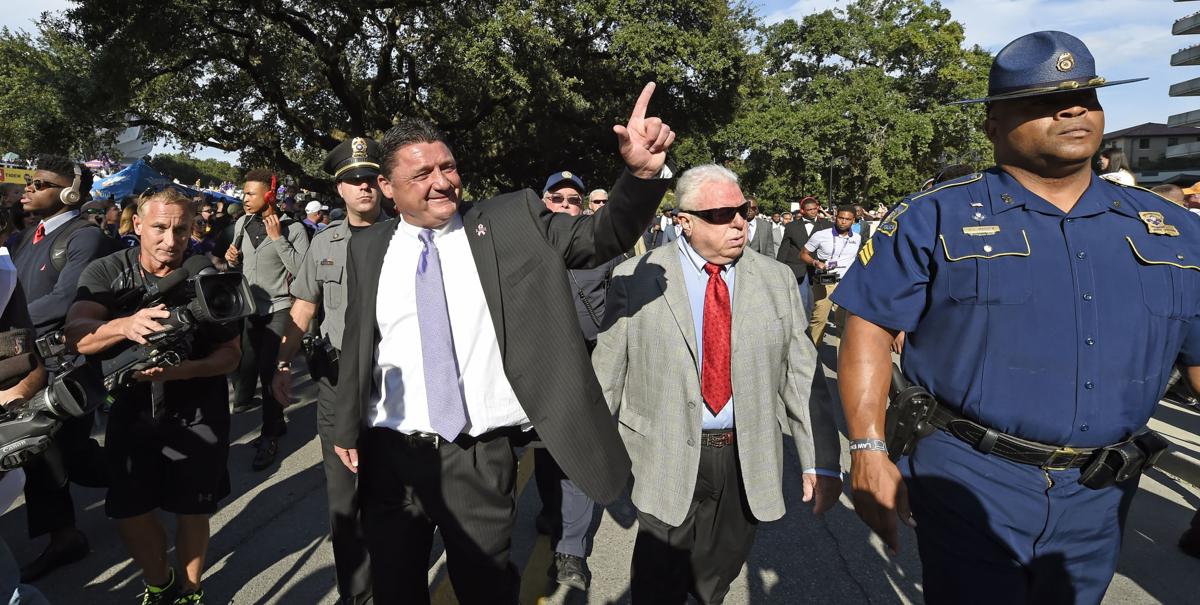 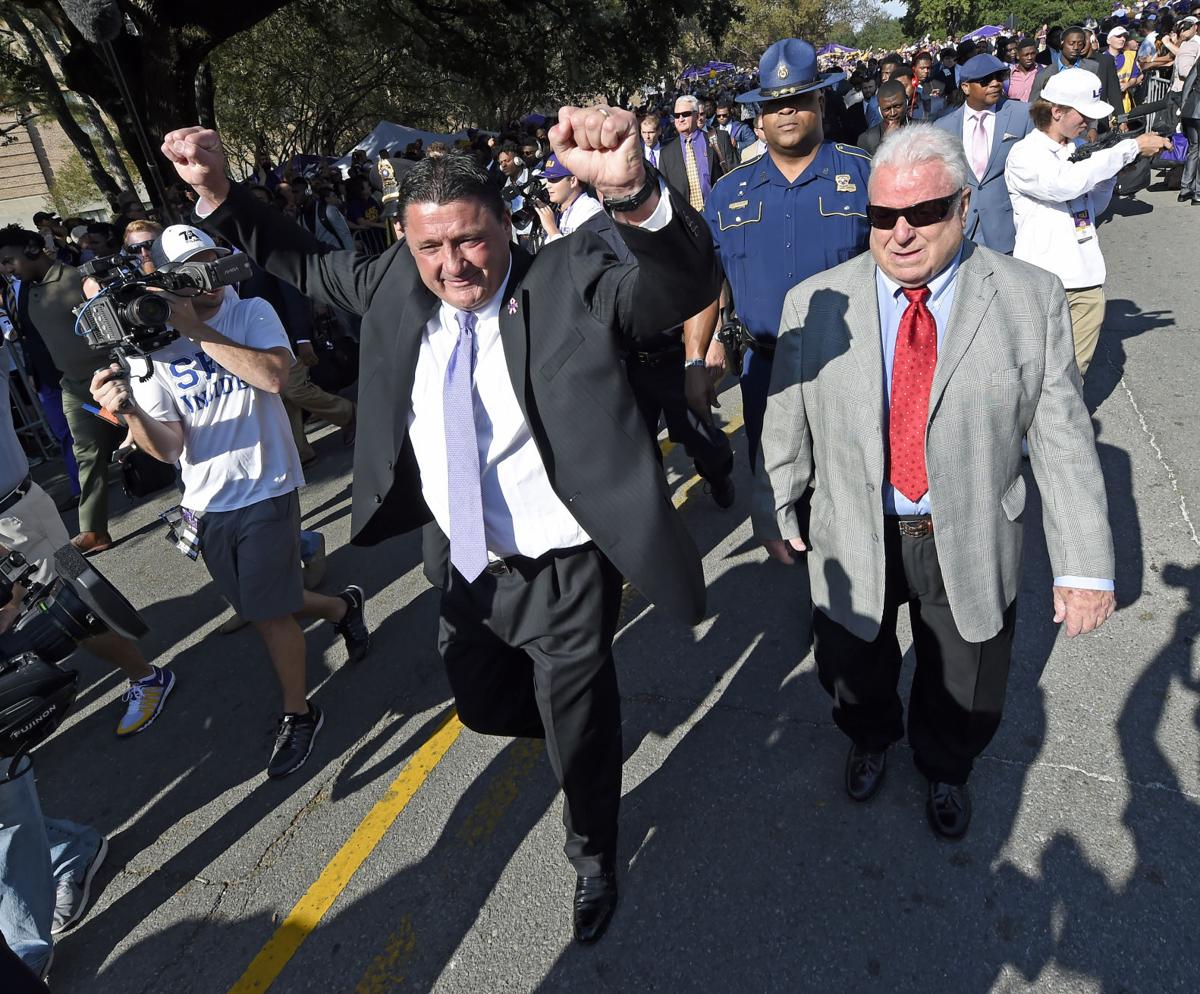 LSU interim head coach Ed Orgeron, center, leads his team onto the field for the first half of the LSU Missouri football game Saturday Oct. 1, 2016, in Tiger Stadium.

The night of Sept. 26, 2016, LSU’s football players walked into a team room for their final meeting with coach Les Miles.

They listened as Miles, the man who recruited them to LSU, said his goodbyes in the middle of his 12th season. Miles left, and about two minutes later, athletic director Joe Alleva introduced their interim head coach, Ed Orgeron.

Orgeron walked into the room screaming as he tried to energize a team that had started the season ranked No. 5 in the country and lost two of its first four games. The players had just seen their coach fired. They sensed division. Orgeron wanted to create unity.

Orgeron had a long, heavy rope brought into the room. School officials had arranged it through the Baton Rouge Fire Department for him, and firefighters delivered it to the football operations building earlier that day.

The team meeting room resembled a movie theater, with ascending rows of chairs and a small area in the front for speakers. Orgeron called different offensive and defensive position groups onto the floor. He told them to stand on either side of the rope and pull, recreating an exercise he learned from Pete Carroll. The players hit a stalemate.

Coaches, administrators and staff members joined the game. After a while, Orgeron asked everyone to stand on one side of the rope. They yanked it across the floor, and Orgeron used the moment as an analogy for what they could accomplish if they worked together.

“That energy brought us together as a team,” said KJ Malone, the starting left tackle. “We wanted to win for this guy.”

Orgeron started his tenure with that game of tug of war as LSU prepared to face Missouri. He began to change the program, installing new mottos and beliefs that helped launch LSU to the top of college football. Now four years later, No. 17 LSU plays Missouri at 11 a.m. Saturday for the first time since Orgeron’s first game as interim head coach.

“Excitement,” Orgeron said, laughing, as he remembered that first week. “There was excitement in the building. There was a change.”

After the tug of war exercise, Orgeron organized a light week of practice. Taking lessons from his one season with the New Orleans Saints, he used NFL-style sessions that emphasized energy while decreasing overall reps. The Tigers had practiced for up to three hours at a time under Miles.

That Monday, which Orgeron dubbed “Tell the Truth Monday,” LSU went over corrections from its previous game, a loss to Auburn. Practicing without pads, LSU walked through plays, then sprinted 30 yards and back. Players raced each other. They had fun. Then Orgeron let them off the field after about 30 minutes.

Sessions remained shorter under Orgeron, lasting about two hours on Tuesday and Wednesday, but LSU practiced with more intensity, running between drills as overall tempo increased. Team periods lasted 20 scripted plays instead of 80. Orgeron wanted them to be perfect and fast.

“We could feel the energy coming off of him,” former LSU offensive lineman Will Clapp said. “There was a revival.”

LSU vs. Missouri: Who ya got? Advocate experts make their picks for Saturday's game

The Advocate's LSU beat team predicts the outcome of the matchup with Missouri in Columbia, Missouri, on Saturday morning.

Inside the football operations building, Orgeron installed his “One Team, One Heartbeat” motto on the wall of the team meeting room. He also placed an LSU logo with interlocking letters, used by the baseball team, inside the room to emphasize unity. He opened practice to former players, even inviting them to the pregame Tiger Walk.

The morning of the Missouri game, Orgeron walked into a special teams meeting around 10 a.m. and told the players to set their jaw. They didn’t understand what he meant. Orgeron punched himself in the chin.

It was another road game in another world, and a storm of a different kind was swirling.

The punch, an Orgeron staple over the years, energized the players. They sensed how much Orgeron loved Louisiana and LSU. He had wanted to coach at LSU since childhood, and now he had a chance to lead the team onto the field. He cherished the moment, pumping his fists down Victory Hill as he so often does, but he also aimed to become the long-term coach.

That night, despite playing without star running back Leonard Fournette, LSU beat Missouri 42-7 while setting a then-school record for yards (634) in a conference game. Missouri didn’t score until the fourth quarter.

As Orgeron walked off the sideline when time expired, two players dumped Powerade over his back, dousing him in a celebratory ice bath after his first win. It was LSU’s biggest conference win in two years. Drenched, Orgeron walked back through the tunnel with both arms raised.

LSU finished the regular season 8-4 (6-2 under Orgeron), but the players had fun. Orgeron started the annual Tiger Bowl during the open week, which let starters coach backups in a scrimmage and rewarded the winners with steaks. He renewed the energy within the program. He set an expectation for winning championships. He tinkered with the offense until it smashed national records.

How does LSU beat Missouri? Keys include handling sudden change and clean football

Playing an unexpected road game because of Hurricane Delta, No. 17 LSU travels to Missouri this Saturday. These are staff writer Wilson Alexander's keys to the game for LSU.

Orgeron secured the full-time job after the season, and the Tigers won their fourth national title a few years later. Though LSU lost its first game this season, Orgeron has crafted a program that seems built to last as he strings together top recruiting classes.

“Everything we did was built from what had been started that day,” Ferguson said.

That night against Missouri, as he held his first postgame press conference at LSU, Orgeron said: “We’re just getting started.” Despite all his success the last four years, Orgeron repeated the sentiment earlier this week. As he reflected on what has occurred since his first game as LSU’s interim coach, Orgeron said he thinks there’s more to come.

“It passed very fast,” Orgeron said. “I love working at LSU. I come to work every day with a smile on my face representing the state of Louisiana and LSU. It's been phenomenal, the things that we've done, and we've still got aways to go. I think we're just getting started.”

Ahead of game vs. LSU, Missouri has at least seven players out with coronavirus concerns