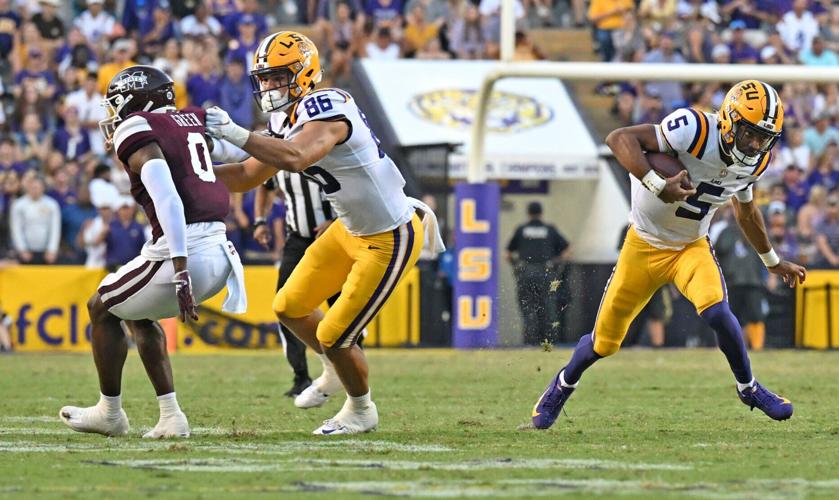 LSU quarterback Jayden Daniels (5) runs the ball as LSU tight end Mason Taylor (86) holds Mississippi State safety Jalen Green (0) back in the second half of the Tigers' 31-16 win over the Bulldogs, Saturday, September 17, 2022, at Tiger Stadium in Baton Rouge, La.

LSU quarterback Jayden Daniels (5) runs the ball on the keeper in the first half of the Tigers' SEC opener against the Bulldogs, Saturday, September 17, 2022, at Tiger Stadium in Baton Rouge, La.

LSU quarterback Jayden Daniels (5) runs the ball as LSU tight end Mason Taylor (86) holds Mississippi State safety Jalen Green (0) back in the second half of the Tigers' 31-16 win over the Bulldogs, Saturday, September 17, 2022, at Tiger Stadium in Baton Rouge, La.

LSU quarterback Jayden Daniels (5) runs the ball on the keeper in the first half of the Tigers' SEC opener against the Bulldogs, Saturday, September 17, 2022, at Tiger Stadium in Baton Rouge, La.

In two of the first three games LSU has played this season, starting slow on offense has been a problem. As the Tigers head into Saturday’s game against New Mexico, one of their top priorities is to get off to a faster start.

“I’m excited to be in Tiger Stadium again for a third consecutive week, but now we have to look towards persistence and consistency,” first-year coach Brian Kelly said Monday. “We’re looking at a football team now that has a chance to be a good team — and that means coming back after a good win and putting together a complete performance.”

That will take a little more discipline from the offense. In last week's 31-16 win over Mississippi State, the Tigers committed three of their four false-start penalties in the first half and only traveled 131 yards before the break.

The offense gained 281 yards after halftime, with quarterback Jayden Daniels commanding an up-tempo offense. Daniels attempted 13 passes in the first half and 24 in the second, completing 59% of his passes overall. He also led the team with 93 yards rushing, averaging 5.8 yards per carry.

“We play better as a unit that way,” Daniels said Saturday. “Not just me personally, but everybody else. You're giving the defense time to get set, go out there and make an adjustment. Receivers, O-line, myself, running back group — we might start thinking too much with everything going on instead of going out there and playing football and trusting our eyes."

The theme was similar in LSU's season opener against Florida State, when the offense started slowly and came to life late, using an up-tempo attack. Daniels more than doubled his pass attempts in the second half while also rushing for over 100 yards. That tempo resulted a comeback that put the Tigers an extra point away from overtime with the Seminoles.

Daniels is a known dual-threat quarterback, and he’s effective on his feet, even earning the second-highest rushing grade by Pro Football Focus after Week 3.

Both Kelly and coordinator Mike Denbrock voiced their preferences for a mobile quarterback in preseason practice, but the risk of injury comes with Daniels running on 16 snaps in each of the Tigers’ two competitive games this season.

The counterpoint to that, Kelly said, is that if he tells Daniels that he's running too much in general, then Daniels may be too hesitant to run on plays when that is the most feasible option.

“When we evaluate when he runs, if it was within the progression against really good coverage … or if it was within a particular position and he got flushed, versus you turned down a potential high-low read and took off,” Kelly said. “There’s still growth there, where he can stay a little bit more patient on the progression. Then there are some times they’re really dynamic runs where there was nothing there, and he made something happen.”

But assuming a tempo attack rids all of LSU's problems — including communication problems on a young ever-changing offensive line — is not the only answer.

The Tigers have had three different offensive line combinations through their first three games, including a switch at the center position from sophomore Garrett Dellinger to junior Charles Turner.

On Saturday, LSU’s line featured true freshmen at both tackle positions (Will Campbell and Emery Jones), and sophomores at left and right guard (Dellinger and Miles Frazier). Dellinger accounted for one false-start penalty, while Turner had the other three Saturday. Anthony Bradford, a junior guard, was inactive against the Bulldogs on Saturday but could see more time against New Mexico.

“We’ve got to clean up communication, cadence, rhythm,” Kelly said. “So, take some of that out of the mix, so to speak, so you can just go fast and not have to worry about it. I think at times we have to think in terms of correcting the gross errors instead of trying to correct everything at the line of scrimmage.”

New Mexico is 2-1 overall and 0-1 in the Mountain West, with a loss to conference opponent Boise State. Still, the Lobos are not to be taken lightly. LSU's history is sprinkled with upset losses against the likes of UAB and Troy.

Two weeks ago, the lower-level Sun Belt Conference made a splash when three of its teams beat Power Five opponents.

Besides, Kelly said, the focus of LSU's offense should be on executing well, regardless of the opponent.

“Our expectations and standards are that we have a great week of preparation,” Kelly said. “Whether it’s an SEC competition or not. We need to be consistent in what we’re doing, and that will be a challenge this week.”

Wilson Alexander contributed to this report.