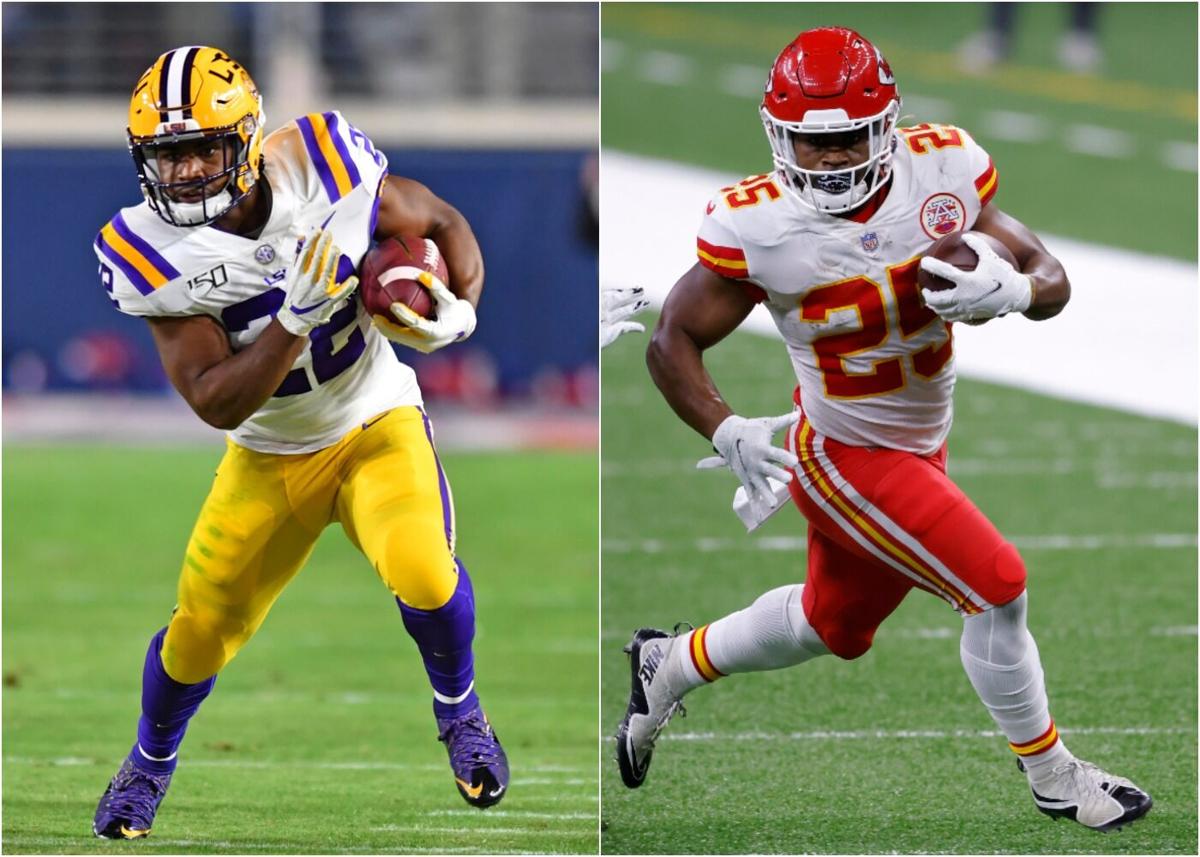 Running back Clyde Edwards-Helaire with LSU (left) and this season as a member of the Kansas City Chiefs. 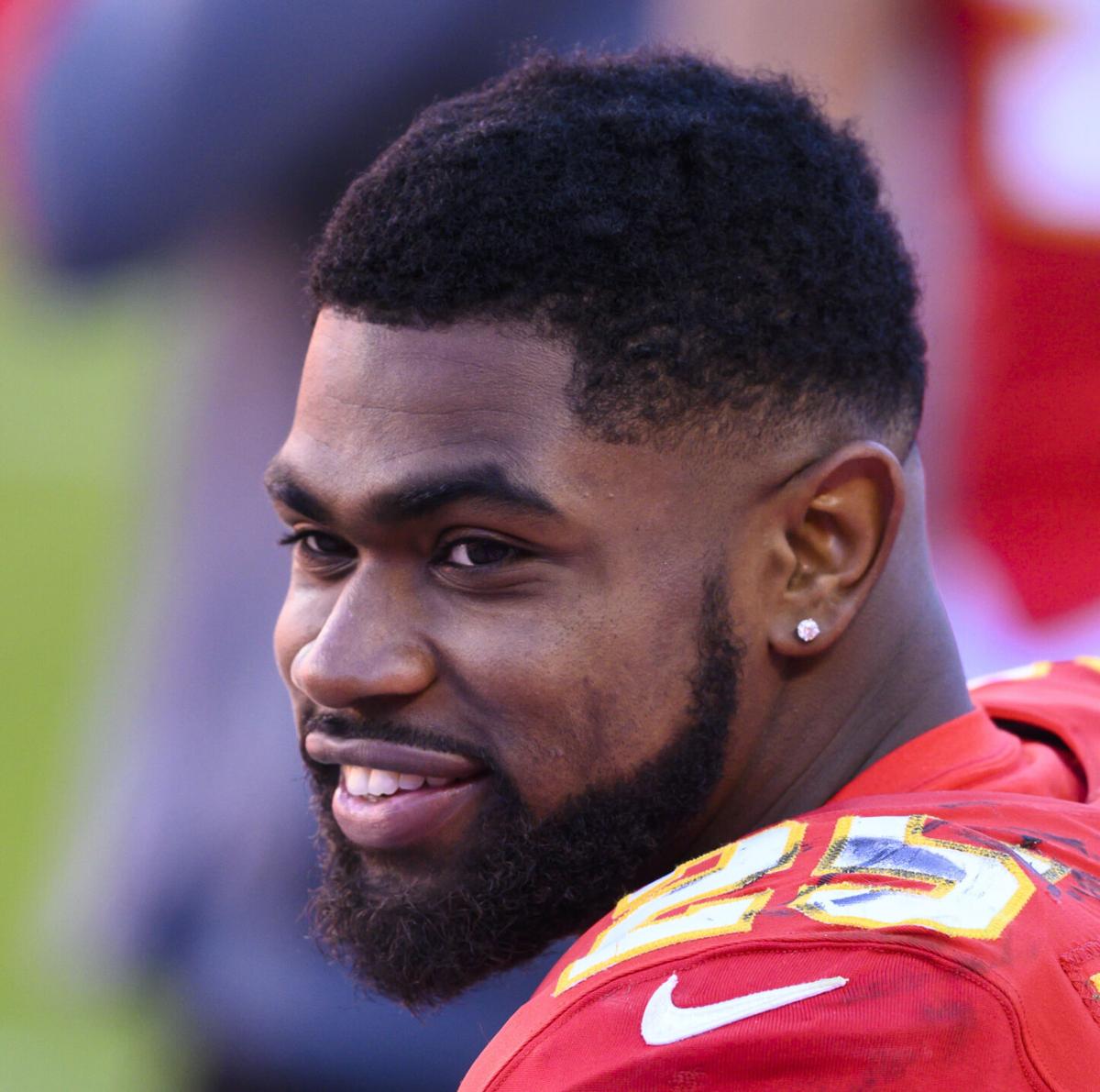 Kansas City Chiefs running back Clyde Edwards-Helaire watches from the sideline as time runs out on their game against the New York Jets on Nov. 1 in Kansas City, Mo. 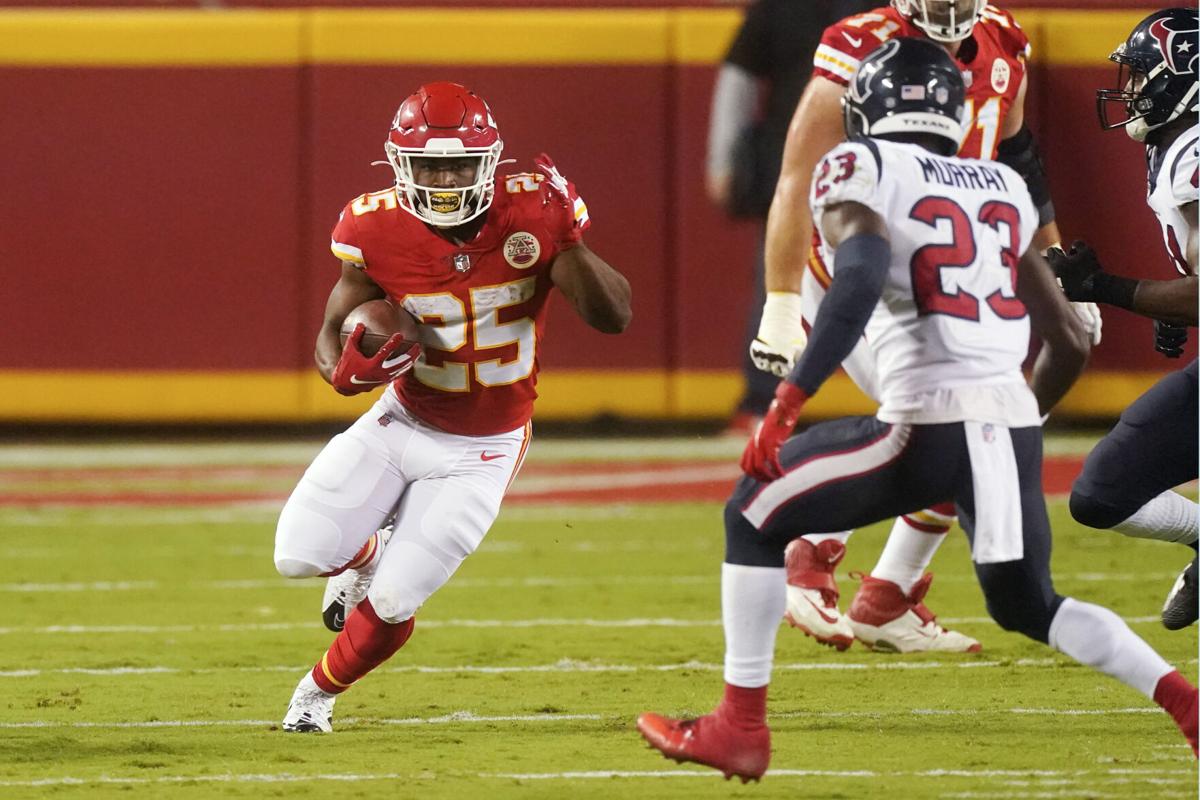 Running back Clyde Edwards-Helaire with LSU (left) and this season as a member of the Kansas City Chiefs.

Kansas City Chiefs running back Clyde Edwards-Helaire watches from the sideline as time runs out on their game against the New York Jets on Nov. 1 in Kansas City, Mo.

Before every big game Clyde Edwards-Helaire plays, Catholic High football coach Gabe Fertitta texts his former running back the word “lucky,” and a quote from Father Andre Coindre, who started the Brothers of the Sacred Heart order which would go on to found CHS.

It would be difficult for anyone to have watched Edwards-Helaire’s football career from his formative years at Catholic High to LSU to now the eve of Super Bowl LV, which he will play Sunday as a star running back for the Kansas City Chiefs, and not be somewhat amazed.

For years, people have questioned Edwards-Helaire’s size, only 5-foot-7, 207 pounds. They questioned his speed after running a 4.6-second 40-yard dash in the NFL combine.

But the measurements didn’t quantify his desire, his effort, his work ethic.

It’s what made him Catholic’s MVP of its 2015 Class 5A championship game win over Archbishop Rummel. It’s why he beat out two more heralded running backs — Destrehan’s five-star prospect John Emery and Southern Lab’s Tyrion Davis-Price — to be LSU’s starting running back in 2019, the X-factor in the Tigers’ record-breaking offense en route to the national championship.

“Obviously at this point he’s proven all those doubters wrong,” Fertitta said. “I think that’s motivated Clyde after all his success.”

Now Edwards-Helaire goes out Sunday against the Tampa Bay Buccaneers on their home field, Raymond James Stadium, trying to help the Chiefs become just the ninth back-to-back Super Bowl winners ever. Kickoff is set for 5:30 p.m. on CBS.

Back-to-back Super Bowl titles are obviously rare. So is someone who has been a champion on the high school, college and NFL level. That’s the unusual trifecta Edwards-Helaire is trying to hit.

What was it that Paul “Bear” Bryant said about himself: “I ain’t never been nothing but a winner?” Edwards-Helaire could have that phrase plastered on a bumper sticker of his 1970 Chevy Chevelle he is happily tinkering with when he’s not immersed in football.

Edwards-Helaire said his formula for winning is simple: trying to be better than he was in his last game. His mantra to a large degree echoes Father Coindre’s words from 200 years ago in France.

“I know the ultimate goal is that we try to get the win,” he said. “But I’m trying to be better than I was the previous game. That’s the win, the happiness for me. Once I feel I beat the Clyde that played the last game, if a win comes with it, I’ve done everything I’m supposed to do.

Edwards-Helaire was remembered for his first performance of the 2020 season, a 138-yard, one touchdown performance in a season-opening 34-20 win over Houston. Five weeks later he rushed for a season-high 161 yards in a 26-17 win at Buffalo.

Injuries made Edwards-Helaire’s last two games something to forget, though. He suffered scary-looking hip and ankle injuries in a 32-29 win at New Orleans on Dec. 20 and missed the Chiefs’ playoff opener against Cleveland. When he returned for Kansas City’s 38-24 AFC Championship Game win over Buffalo, Edwards-Helaire had just seven yards and a score on six carries. Darrel Williams, the Chiefs’ other LSU running back, carried the load with 52 yards and a TD on 13 carries.

“I called him the day after the New Orleans game,” Fertitta said. “He calmed my nerves a little bit.”

Now Edwards-Helaire is back and ready to fill his primary role in the Chiefs backfield.

"What Clyde brings is a versatility, a change-of-direction and explosiveness that definitely has been an added piece to what we do,” Chiefs running backs coach Deland McCullough said. “He's very smart. Coming out of a top program, he has championship pedigree. He's just been a great guy to have around, and what he's done on the field speaks for itself.

“As he's coming off this injury it’s something we've been really excited about because he's looking good. He's running fast, cutting, doing the things he did prior to the injury. As he continues to develop in this system, in this league, there are big things coming for him — even bigger things coming to him."

Fertitta has been saying that for a long time.

One day when he was walking through the halls at Catholic High during Edwards-Helaire’s freshman year, Fertitta was stopped by a member of the school administration who wanted to know how now troubled tailback Derrius Guice was looking in spring practice.

“ ‘He’s immensely talented,’ ” Fertitta said of Guice. “ ’But I’m just telling you, Clyde Edwards-Helaire will play in the NFL a long time.’ ”

Devin White rode from LSU to Super Bowl. The next ride? Hopefully on his horse, trophy in hand