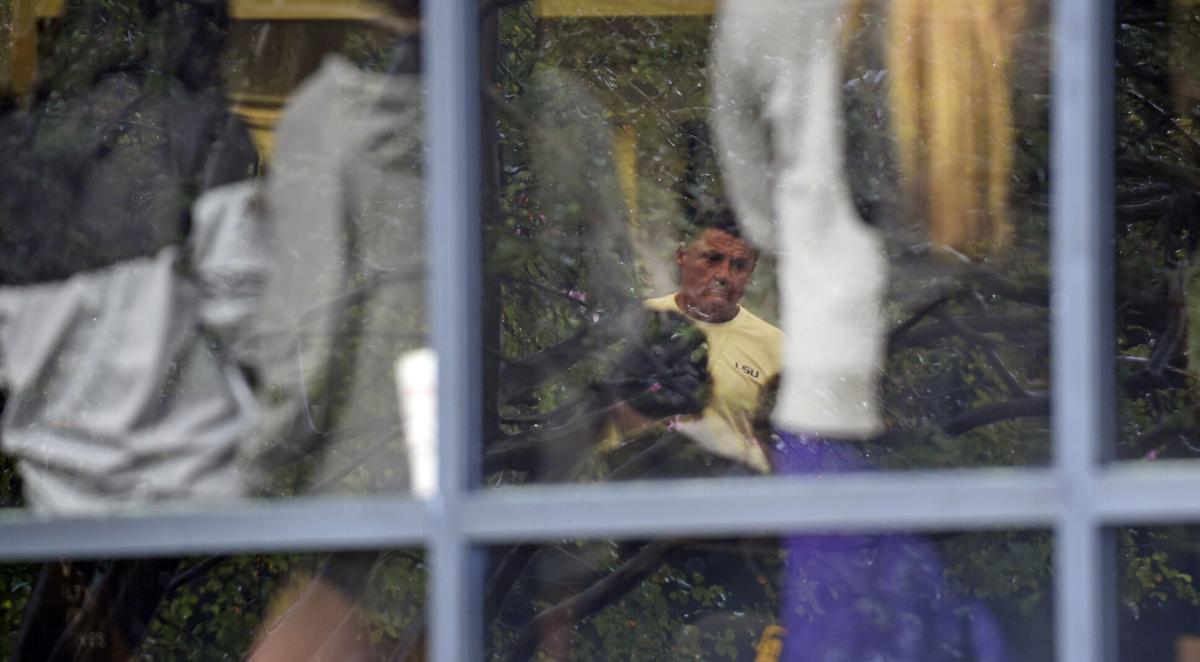 LSU coach Ed Orgeron speaks with his players after members of the football team marched from Tiger Stadium to the Office of the President in support of social justice at the LSU Systems building, Friday, August 28, 2020. They met behind closed doors inside the Board of Supervisors chamber. 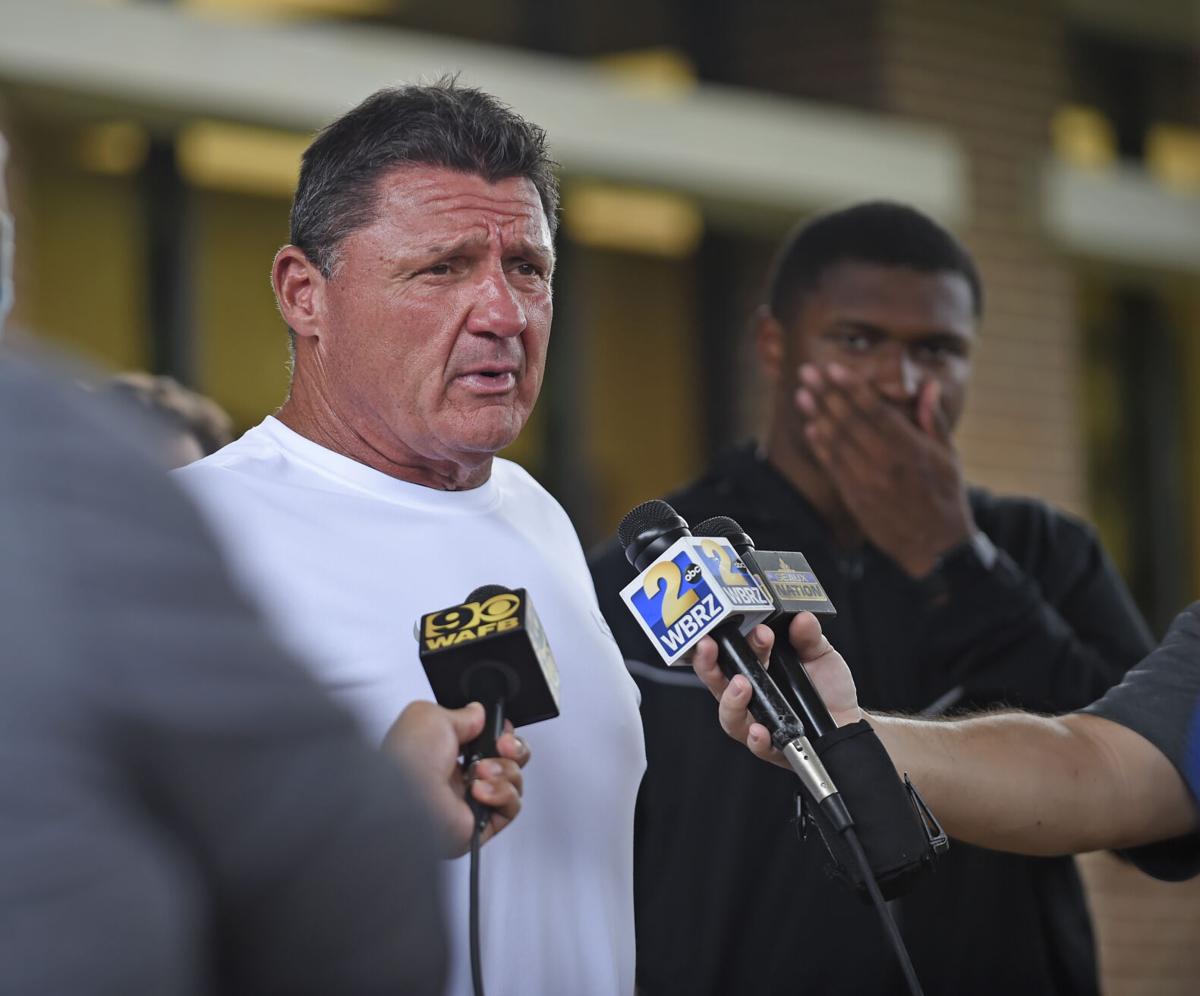 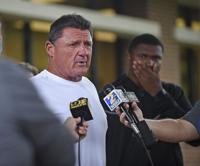 LSU coach Ed Orgeron speaks with members of the media after his players marched from Tiger Stadium to the Office of the President in support of social justice at the LSU Systems building, Friday, August 28, 2020, in Baton Rouge. To Orgeron's left is senior safety JaCoby Stevens, one of the leaders of the march.

LSU coach Ed Orgeron speaks with his players after members of the football team marched from Tiger Stadium to the Office of the President in support of social justice at the LSU Systems building, Friday, August 28, 2020. They met behind closed doors inside the Board of Supervisors chamber.

LSU coach Ed Orgeron speaks with members of the media after his players marched from Tiger Stadium to the Office of the President in support of social justice at the LSU Systems building, Friday, August 28, 2020, in Baton Rouge. To Orgeron's left is senior safety JaCoby Stevens, one of the leaders of the march.

The issue was eggs.

The 2004 LSU Tigers had one of those 11:30 a.m. Jefferson-Pilot home games against Mississippi State. For a day game, the players wanted eggs for their pregame meal. But as former Tigers fullback Jacob Hester shared recently on his radio show on WNXX-FM, no one dared broach the subject with Nick Saban, who had already chewed out the chef for other changes he made to the menu. (Shocking? Not.)

Fast forward to 2020, and players are asking for a lot more than eggs.

Current LSU football players, not the entire team but dozens of them, marched across campus Friday from Tiger Stadium to the LSU Systems Building to give voice to their feelings about racial injustice. Feelings that have been simmering through the months following the killings of George Floyd and Breonna Taylor, and fanned to fresh flames by the police shooting of Jacob Blake on Aug. 23 in Kenosha, Wisconsin.

The players met first with LSU interim president Thomas Galligan (you think this guy knew what he was signing up for this year when he agreed to be interim president?) then with coach Ed Orgeron. Both were apparently caught off guard by the march, Galligan not knowing the players were on their way until they arrived outside his office about 15 minutes later, Orgeron not knowing beforehand that the players were choosing to march instead of practice.

LSU football players march through campus for racial justice: 'We need to do something'

Players on the LSU football team began organizing a march through campus around noon Friday, trying to hold conversations with LSU leadership …

The traditional football coach in Orgeron had to be none too pleased to have players arbitrarily cancel practice. The realist in Orgeron knows he has to listen to his players and, when prudent, bow to their collective will. The last thing any coach, program, team or school needs in 2020 is to be seen as racially insensitive.

Though Orgeron had to put his jogging shoes on to catch up with the player march Friday, he also appeared to rebound, as evidenced by comments from the players who put the demonstration together: senior safety JaCoby Stevens and senior defensive end Andre Anthony.

“Coach O demonstrated support and presented us with the upmost respect by listening to our points of view as Black athletes in an attempt to understand the challenges we face,” Anthony tweeted Friday evening. “The first step is acknowledging that there is an issue and we need change. I commend him for his efforts.”

“I think we’re going to grow as a football team and as a family from that,” Stevens said.

Wherever you fall on the political spectrum, you have to respect the feelings and intentions of these players, hear their concerns as human beings and accept that they deserve to have a voice. They acted in a mature and respectful way, with players following up Friday's demonstration by gathering Hurricane Laura relief supplies Saturday. Their actions demand mature and respectful response in kind.

Come to think of it, on a community-wide spectrum, the marches and protests during this time of nationwide social unrest that have frequently devolved into riots in other cities have not been the case in Baton Rouge. In a city beset by angry protests and police shootings in 2016 after the Alton Sterling killing, the demonstrations have been peaceful. May they continue to be that way.

Hopefully, the cross-campus march by LSU’s football players can be an example.

The question now becomes, where do they go from here? Athletes pro and college have spoken about promoting voter registration and making it easier for people to vote. To that end, it was announced Saturday that NBA-owned arenas will be opened for voting in the Nov. 3 presidential election. There was no announcement as of this writing regarding the Pelicans’ home arena, the Smoothie King Center, but the state-owned facility is expected to follow suit.

It is a virtual certainty that there will be more incidents like the Blake shooting that prompt athletes to march, to speak, to possibly strike as NBA, WNBA, NHL and major league baseball players did this past week. To react the way Saints players did this week by wearing Blake's name in tape across the front of their helmets. The way former LSU quarterback Joe Burrow marched and spoke with his new Cincinnati Bengals teammates Saturday.

Will we see more of the same in college sports? No one should be surprised if we do. It would be more appropriate express disappointment if we do not.

LSU’s hierarchy would be well-served to be prepared for the next time. Because players are no longer worried about speaking up for minor issues like eggs on the breakfast table.

They are after something much more than that.

The power paradigm has been adjusted like some great wrench has been taken to the sports industry. And despite the constant churn of players through sports teams and schools, it isn’t likely to turn back.