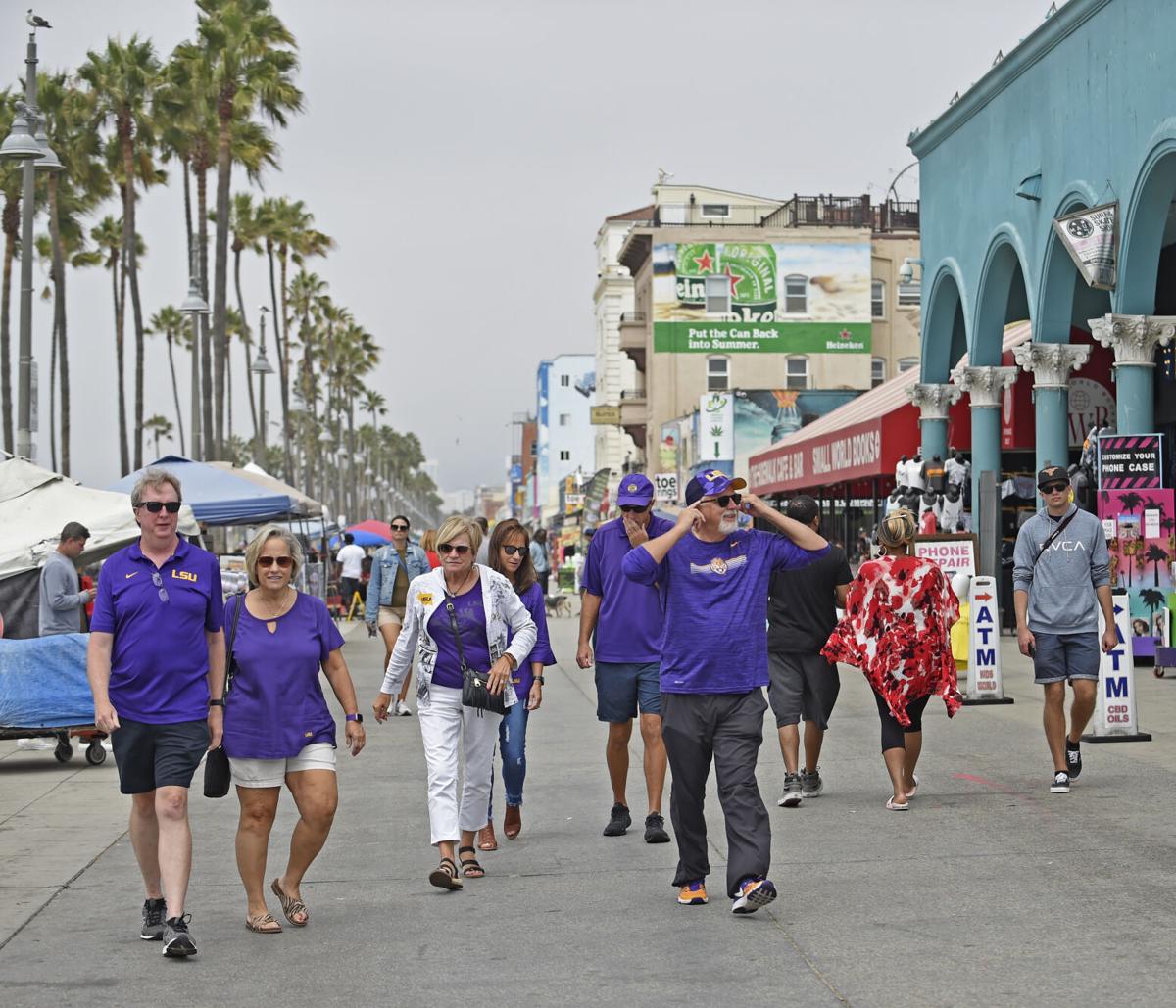 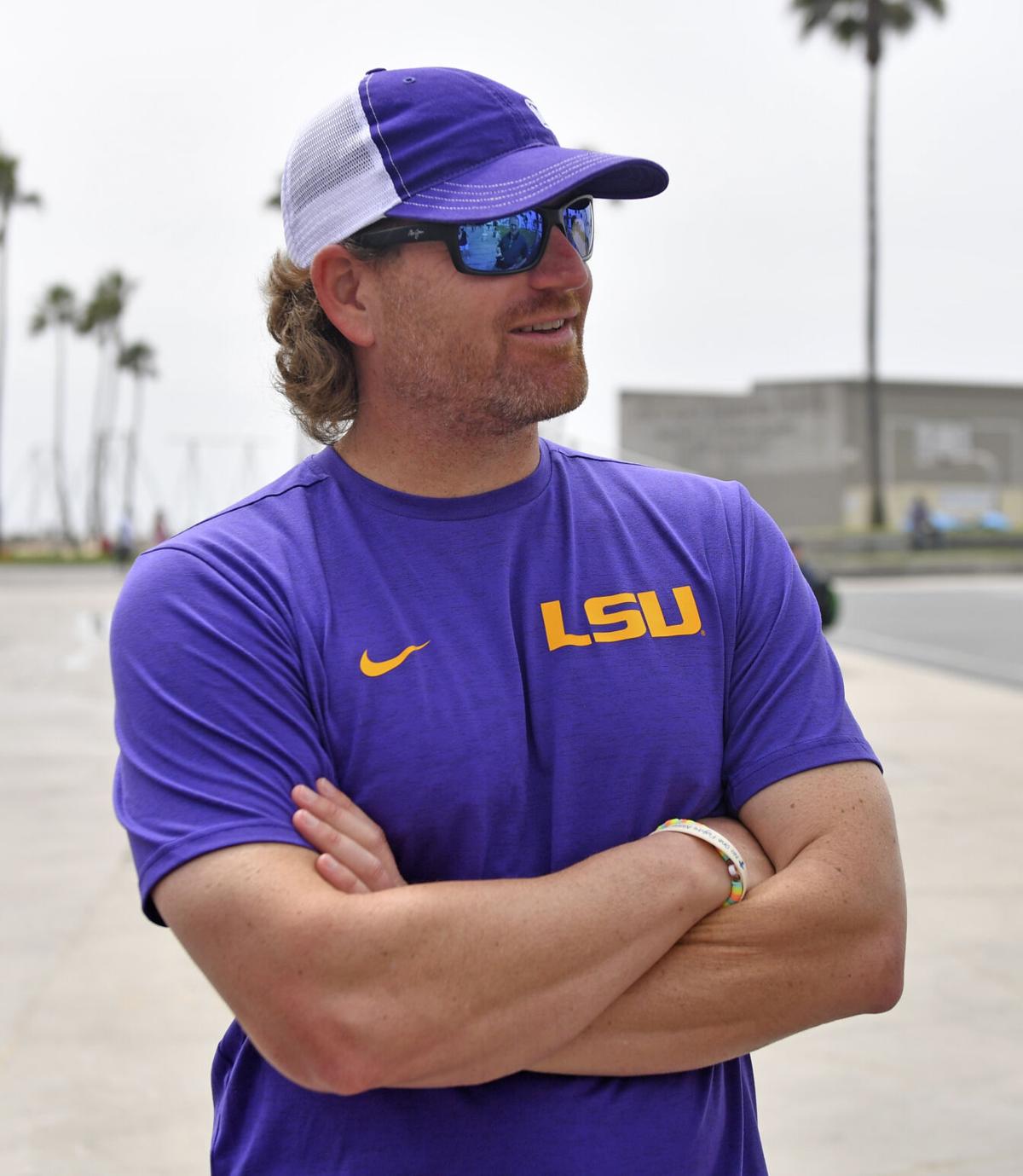 Rusty Blanchard of Youngsville stops to chat as LSU fans visit Venice Beach on Friday afternoon, September 3, 2021, in Los Angeles ahead of the Tigers' game against UCLA Saturday. 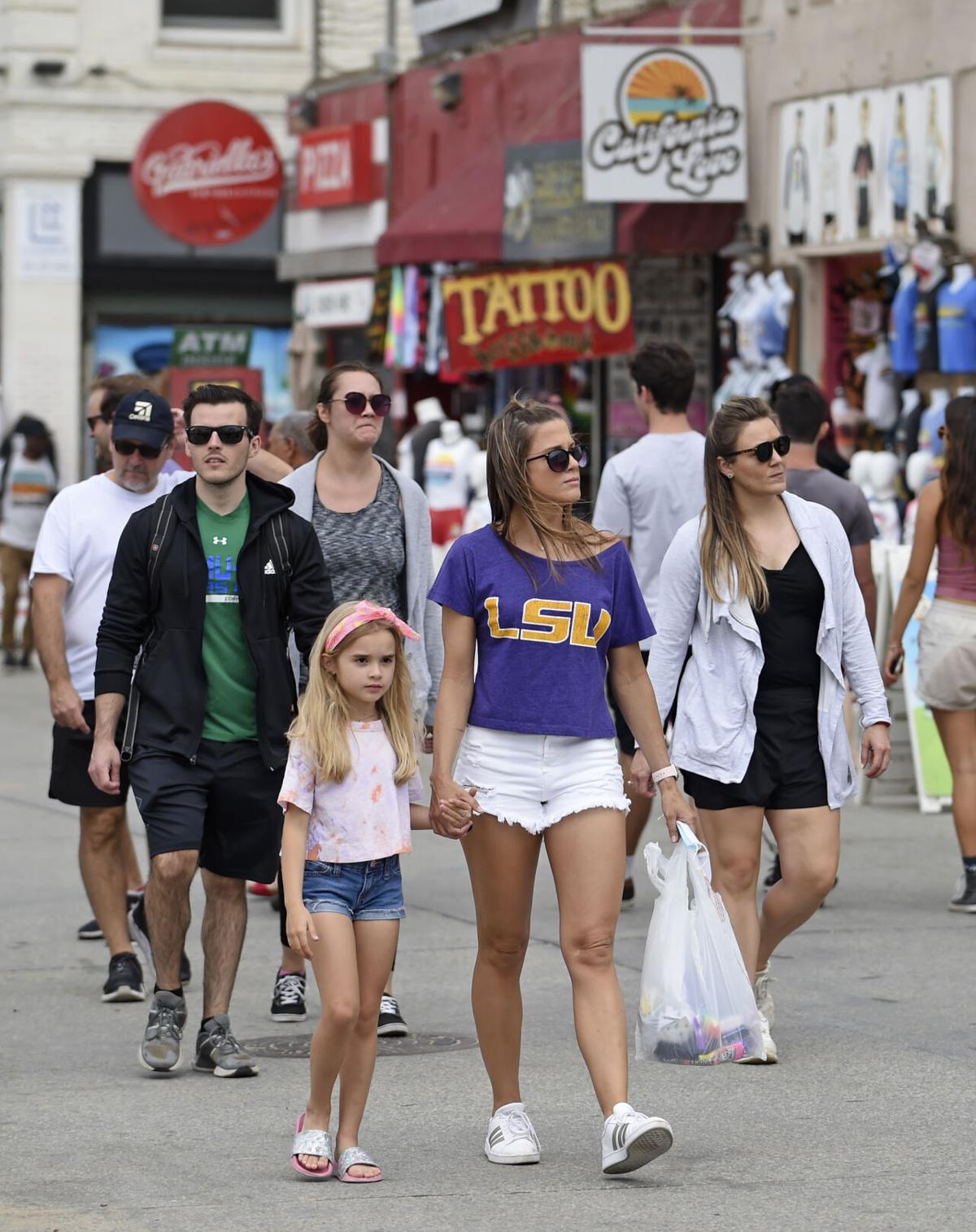 Michelle Triche walks with her daughter, Lillian Triche, 6, as LSU fans visit Venice Beach Friday afternoon, September 3, 2021, in Los Angeles ahead of the Tigers' game against UCLA on Saturday.

Rusty Blanchard of Youngsville stops to chat as LSU fans visit Venice Beach on Friday afternoon, September 3, 2021, in Los Angeles ahead of the Tigers' game against UCLA Saturday.

Michelle Triche walks with her daughter, Lillian Triche, 6, as LSU fans visit Venice Beach Friday afternoon, September 3, 2021, in Los Angeles ahead of the Tigers' game against UCLA on Saturday.

LOS ANGELES — Down on Venice Beach, amid the surfers and the street people and the sand and the wafting marijuana smoke, a large contingent of folks seemed blissfully unaware of Saturday’s big LSU-UCLA game. Or very much else.

That is except for the little bands of purple and gold clad LSU fans, hearty souls strolling down Ocean Boardwalk that looks like Bourbon Street with palm trees. They were seeking out a good time amid the sun and cool Pacific breezes, but they were determined to be here for LSU’s first game in the venerable Rose Bowl despite the hell and high water back home.

Roy and Diane Puderer from New Orleans made it through Hurricane Ida OK, but their Thursday flight here was canceled. So they drove to Houston, connected in Dallas, were rebooked through Oakland and finally made it here.

“It took me a little convincing of my wife, but I said, ‘Baby, we’re going.’

LSU had changed plans before because of hurricanes, but never quite like this. As its state began to recover from another devastating hurricane, the Tigers spent a week on the road before the opening of a pivotal season.

The Puderer’s story was a familiar one among LSU fans. By unplanned courses they came, singly and in big groups, like the 180 or so folks that Rusty Blanchard of Lafayette flew here with on a chartered flight.

For years, thousands of LSU fans eagerly looked forward to Saturday’s game against UCLA in the Rose Bowl. But a whole litany of issues preceded this trip, rolling by like an anti-Tournament of Roses Parade, threatening to upend the whole show. First there was the pandemic, leading some LSU fans to pull for the game to be moved to Las Vegas (the Tigers will be going there in 2024 to play USC). No, officials at both schools said, the game would be played in Pasadena, especially after COVID-19 cases started to ebb earlier this year.

Then came the Delta variant, forcing everyone watching the game in person to wear a mask even though outdoors. Then Ida blew ashore and for some game goers provided an even more immediate threat.

Roofs blown off. Power out. Trees down. Running water scarce in some areas. And the main gateway to the West for many, New Orleans’ Louis Armstrong International, didn’t even resume limited flight service until Thursday.

Still, gumption for many trumped anything Ida threw at them. Haley Baumgardner of New Orleans drove to Jackson, Mississippi, to catch a flight. She and her business partner planned this trip months ago. Though her partner’s New Orleans home now has a caved in roof, they were not deterred or detoured.

She said maybe the attraction that it’s nice to have somewhere else to be when everything is so battered at home.

“It was really hard to get to, but I think that’s why so many people are going,” she said. “It’s kind of sad when you hear them say don’t come back for three weeks.”

But some fans, like Baton Rouge’s Ben Bankston, couldn’t get here no matter how hard they tried.

Inside the betting line, odds for LSU's trip to UCLA

He and a group of three friends had their Friday flight out of New Orleans canceled. He scrambled to find a seat on a flight scheduled to get him into Los Angeles on Saturday morning out of New Orleans, but that got canceled, too. Thursday he tried to find a seat out of Lafayette but that was a dead end. They’re all eating their $120 game tickets.

“It could be worse,” Bankston said. “The house is OK.” He said he might have a group over to watch the game outside on a giant inflatable backyard projection screen.

The determination might have been different had LSU played in the Rose Bowl before. The Tigers were this close (I’m holding my right thumb and index finger very close together now, I promise) to landing in the Rose Bowl against Michigan after the 2006 season. But UCLA stunned USC 13-7, intercepting Evangel’s John David Booty late, to send the Trojans to the Rose Bowl instead of the BCS National Championship Game. That put LSU in the Sugar Bowl against Notre Dame.

USC won five straight over UCLA before 2006. The Trojans won the next five against the Bruins. But on that one day, UCLA collected the upset that indirectly kept the Tigers out of the Granddaddy of them all.

“We’re coming back” for a CFP semifinal, Puderer said.

As for this year’s game, Blanchard is a little anxious. LSU has a lot of questions and hasn’t played a game yet, while the Bruins throttled Hawaii 44-10 last week.

“I’m kind of on the fence,” he said. “Kind of depends on who passes COVID protocols and who can play.”

At least they are playing. At least some LSU fans are coming, despite all that it took to make the trip happen.

How does LSU beat UCLA? Keys include stopping the run, Max Johnson, more

LSU plays its season opener Saturday night against UCLA (1-0) inside the iconic Rose Bowl. These are staff writer Wilson Alexander's four keys to the game.