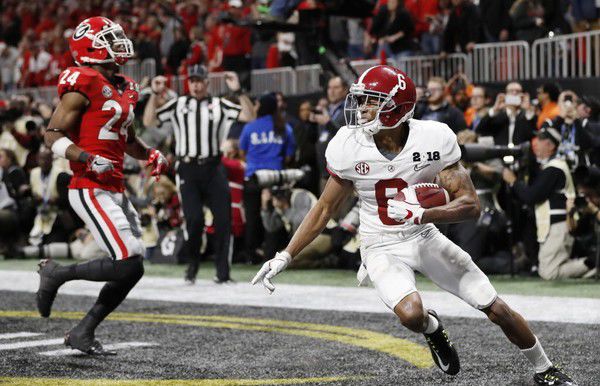 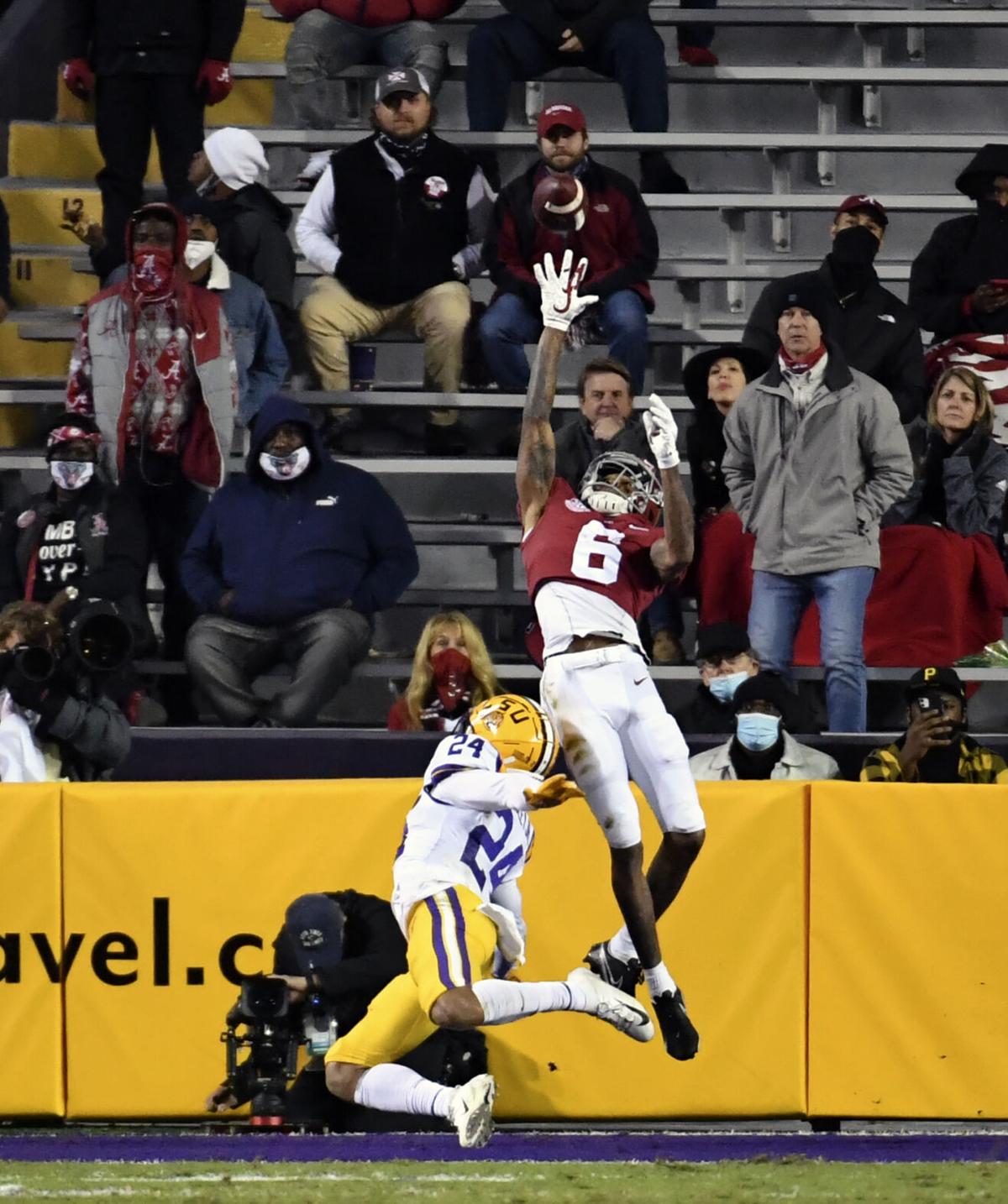 Alabama wide receiver DeVonta Smith (6) reaches back for the one-handed catch to score a touchdown as LSU cornerback Derek Stingley Jr. (24) falls into the end zone on Saturday, December 5, 2020, at Tiger Stadium.

Alabama wide receiver DeVonta Smith (6) reaches back for the one-handed catch to score a touchdown as LSU cornerback Derek Stingley Jr. (24) falls into the end zone on Saturday, December 5, 2020, at Tiger Stadium.

The first question to DeVonta Smith on Monday was naturally about the Heisman Trophy.

Naturally, being an Alabama football player, his response was about team goals. Like the ultimate goal of winning the College Football Playoff national championship next Monday against Ohio State.

“Right now, I'm not really worried about the Heisman Trophy,” Smith said in a CFP video news conference. “I'm just trying to come in with the team this weekend, just look forward to getting on to the game plan for Ohio State.”

Smith has tried to deflect talk about college football’s ultimate prize for weeks now, at least back to the moment when he leaped into his native Louisiana night sky and came down with a remarkable touchdown catch against LSU that really took his candidacy to another level.

DeVonta Smith leaped and extended his right arm for a football only he could catch. In the corner of the end zone at Tiger Stadium, the Alabam…

More on that later. But amid a sea of quarterbacks in what has become a quarterback-dominated award — 17 of the Heisman winners since 2000 have been quarterbacks and the other three running backs, including two from Alabama — Smith has risen above the waves. He goes into Tuesday’s virtual ceremony (6 p.m., ESPN) as the favorite to become the first true wide receiver to win since Michigan’s Desmond Howard in 1991, expected to turn back three other quarterback finalists including Florida’s Kyle Trask, Clemson’s Trevor Lawrence and his own Alabama teammate, Mac Jones.

Eventually, Smith is going to have to address the meaning of winning the weighty 45-pound trophy if he does capture it. But he doesn’t deal with the major moments until they happen, like what was arguably his Heisman moment against LSU.

It is a highlight that is doubly galling for LSU fans, given that said moment came against the Tigers and that Smith comes from Amite. But nonetheless, it exists, the moment he climbed the ladder over LSU All-American cornerback Derek Stingley to come down with a one-handed, Odell Beckham-lite catch in the back of Tiger Stadium’s south end zone.

“To me one-hand catches aren’t something you practice — they just happen,” he said after Bama romped past LSU 55-17. “When you attempt to do a one-handed catch on purpose, it never works out right.”

True to his nature, Smith was nonchalant about the whole Heisman thing that night when he was asked if the play, as it did, vaulted him into trophy contention despite not being a quarterback.

“I’ll say probably because with quarterbacks there are more things to do, more stats you can add to it,” Smith said. “If I’m in the Heisman race, I’m in it.”

Devonta Smith — a four-star wide receiver from Amite — has signed with Alabama, choosing the Crimson Tide over LSU, Miami and Florida State We…

Smith has been making the big plays his entire Alabama career. He first flashed onto the national college football scene as a freshman in the 2018 CFP national championship game in Atlanta, when he caught a 41-yard touchdown pass from Tua Tagovailoa to beat Georgia 26-23 in overtime.

But he maintains that isn’t the biggest thing on his mind these days, with a quiet sincerity that comes across as completely believable.

Three previous Louisiana football players have won the Heisman. Here they are:

Three previous Heisman Trophy winners were born in Louisiana or played at LSU. Here they are:

“I’m here to win a championship,” he said that night at LSU.

Smith’s mindset is probably easier to come by since he entered the 2020 season not even regarded as Alabama’s top receiver. That distinction went to Jaylen Waddle, who was the one on the preseason All-American teams.

But Waddle fractured his ankle returning a kickoff Oct. 24 against Tennessee (as if Alabama needs another offensive weapon, he may return to practice Tuesday). That thrust Smith into the top billing, and the reticent star has made the most of it.

Yes, it's far, far too early to put any stock in projections for the 2021 NFL draft.

Could a Smith Heisman win change the overriding trajectory of the Heisman Trophy, away from quarterbacks like LSU’s 2019 winner Joe Burrow and back toward more multi-dimensional players like Howard and 1959 LSU Heisman winner Billy Cannon?

Perhaps. Or perhaps Lawrence will slip past Smith and be yet another quarterback Heisman winner since Alabama has three candidates (Smith, Jones and running back Najee Harris) in the top three, destined to split up some of the votes in what is a heavily regional award.

But going into the announcement, Smith appears to be the right man in the right moment. Considering his style, a moment is all he will probably give the Heisman win before he goes back to trying to trying to win that other trophy Monday night.

Inside an NFL pipeline: How LSU, Alabama have pruned pro talent for a full decade

When potential recruits are escorted through the halls of the newly-renovated LSU Football Operations Center, there’s no doubt it’s an eye-ope…