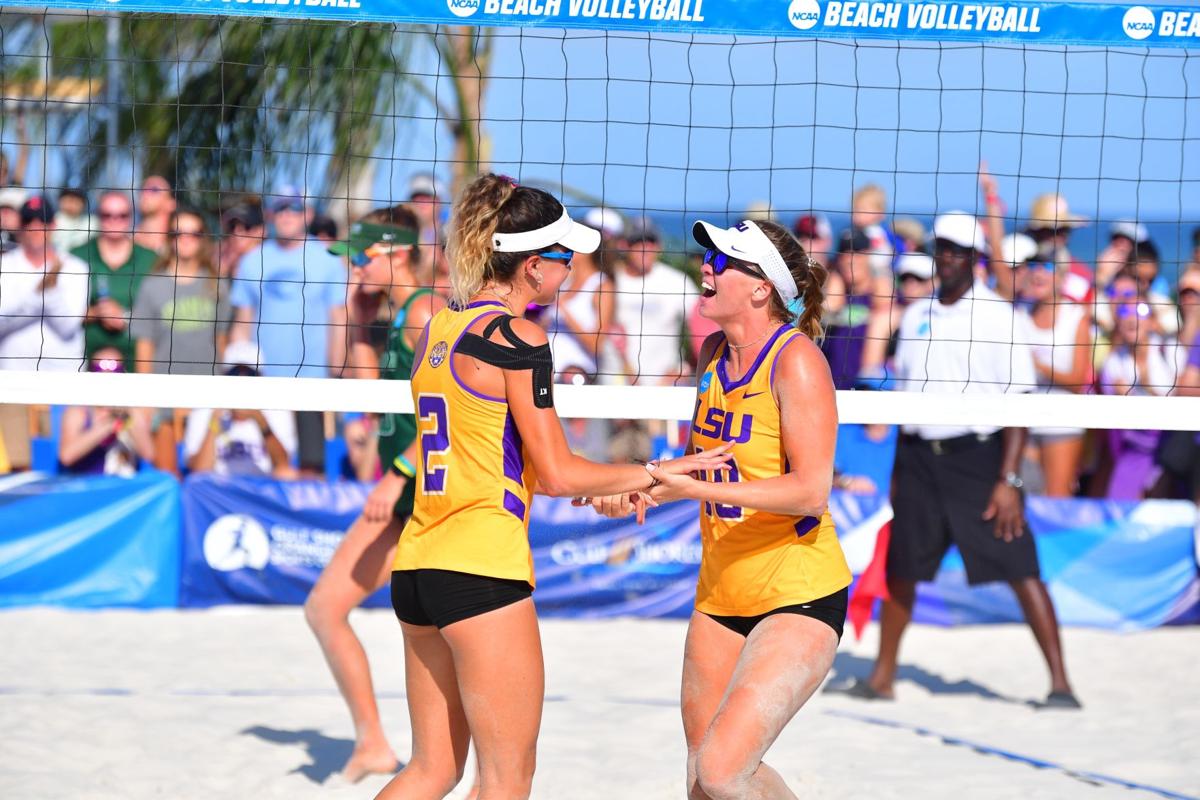 LSU's Allison Coens, left, and Hunter Domanski celebrate a point during their match-clinching victory against Stetson in the NCAA Championship on Friday, May 3, 2019 in Gulf Shores, Alabama. 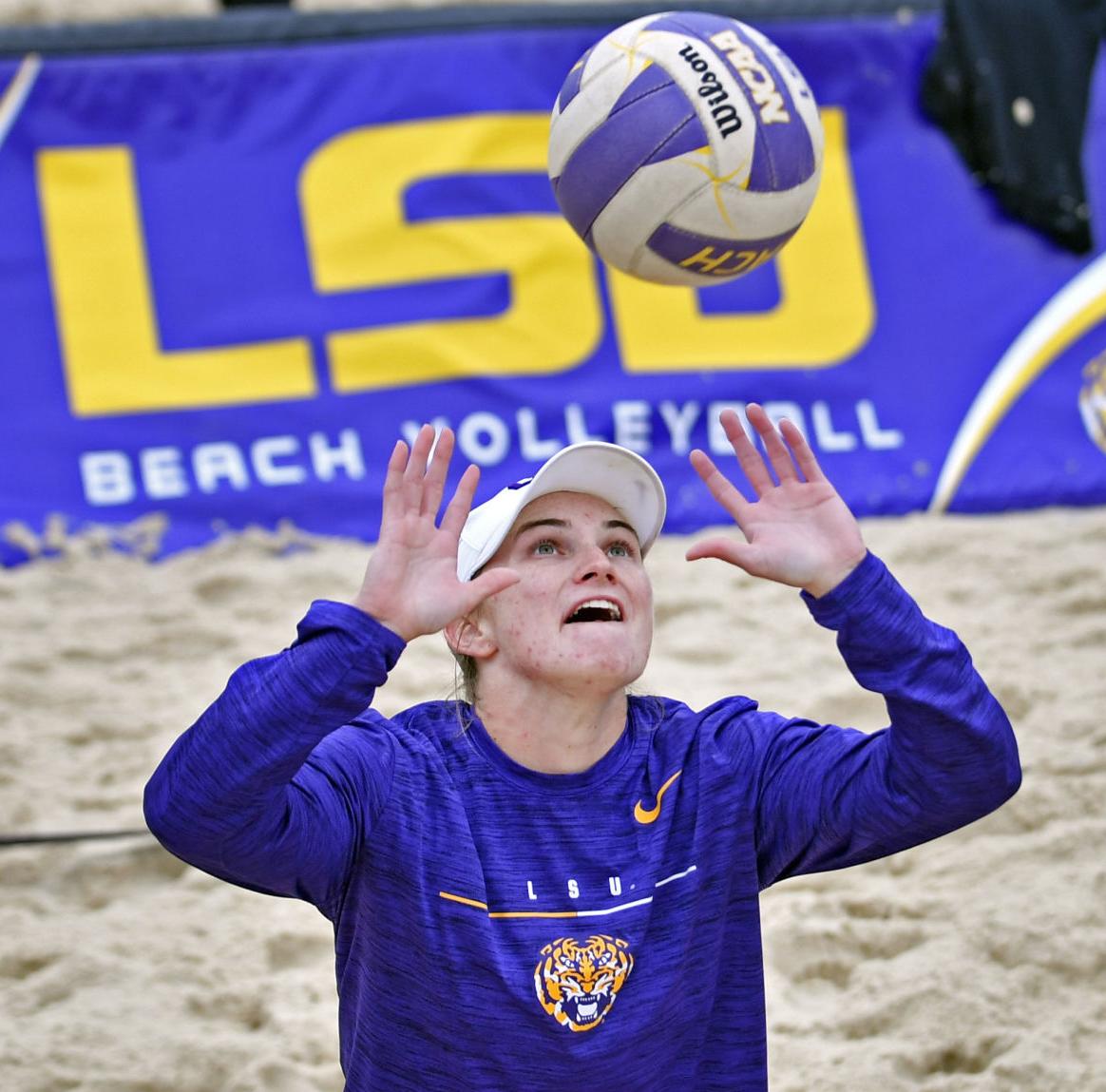 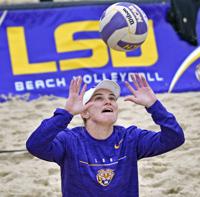 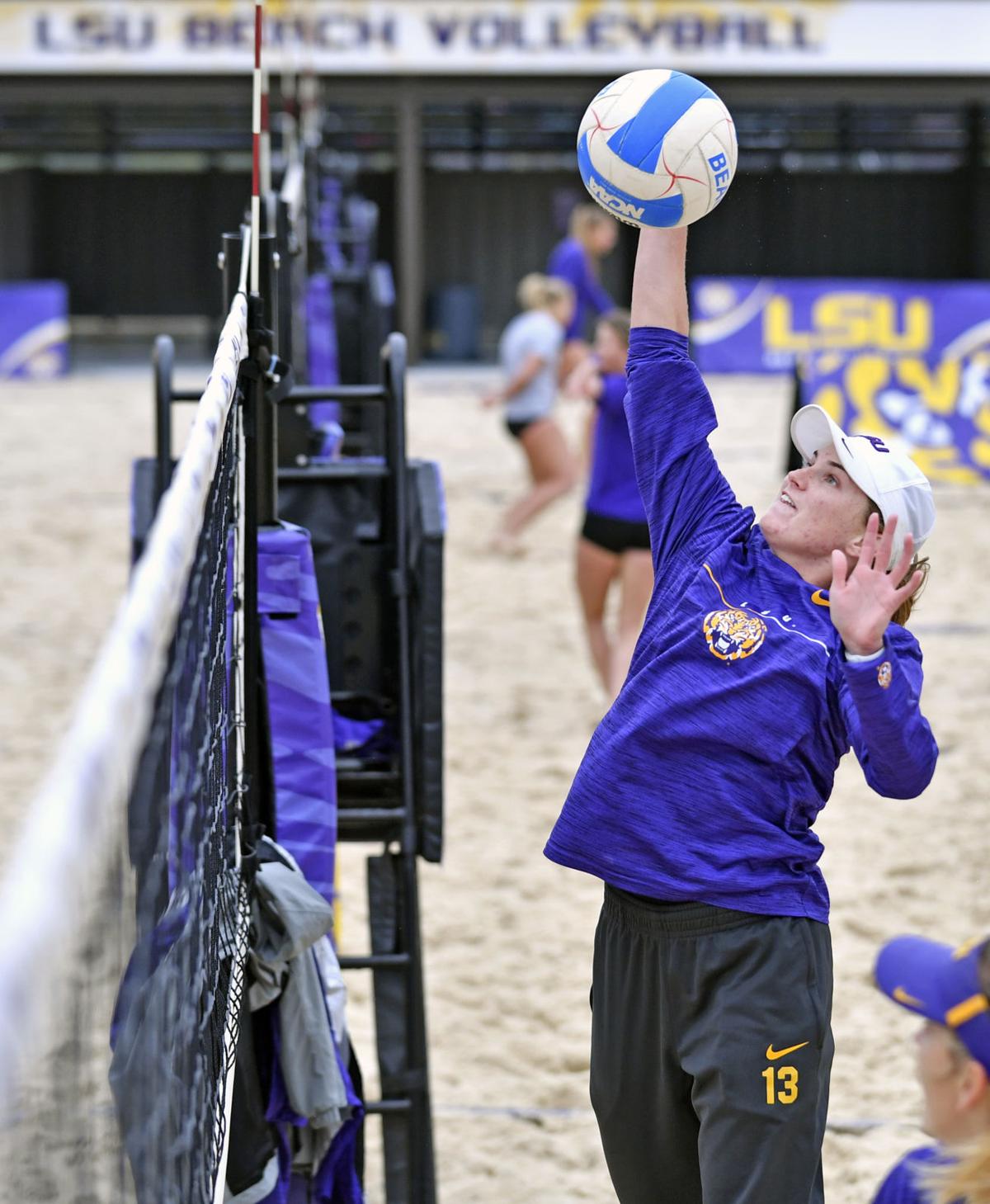 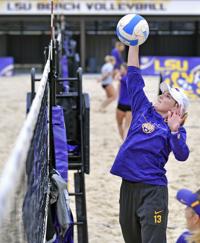 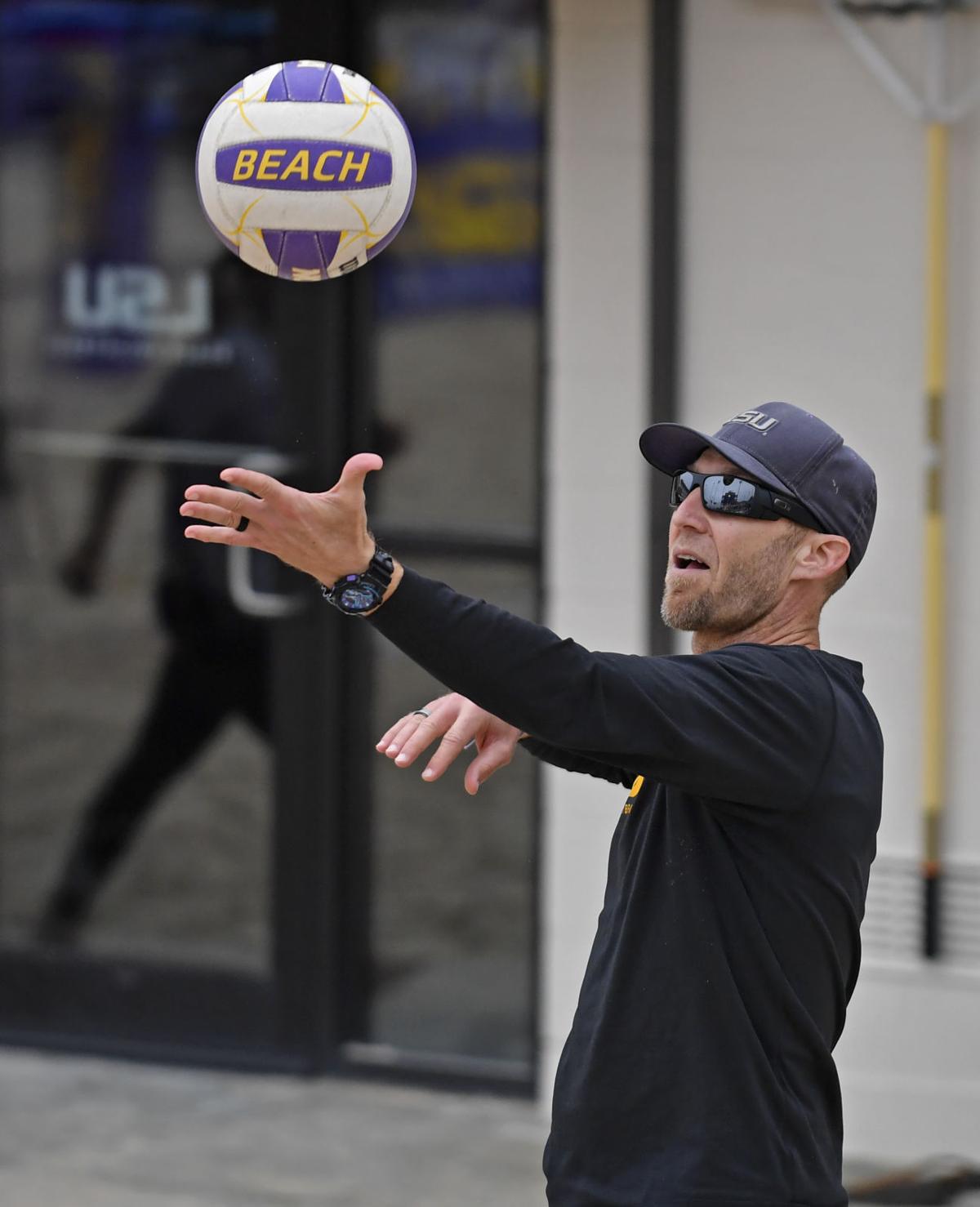 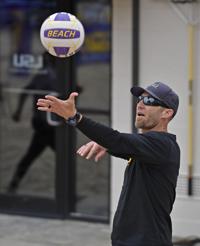 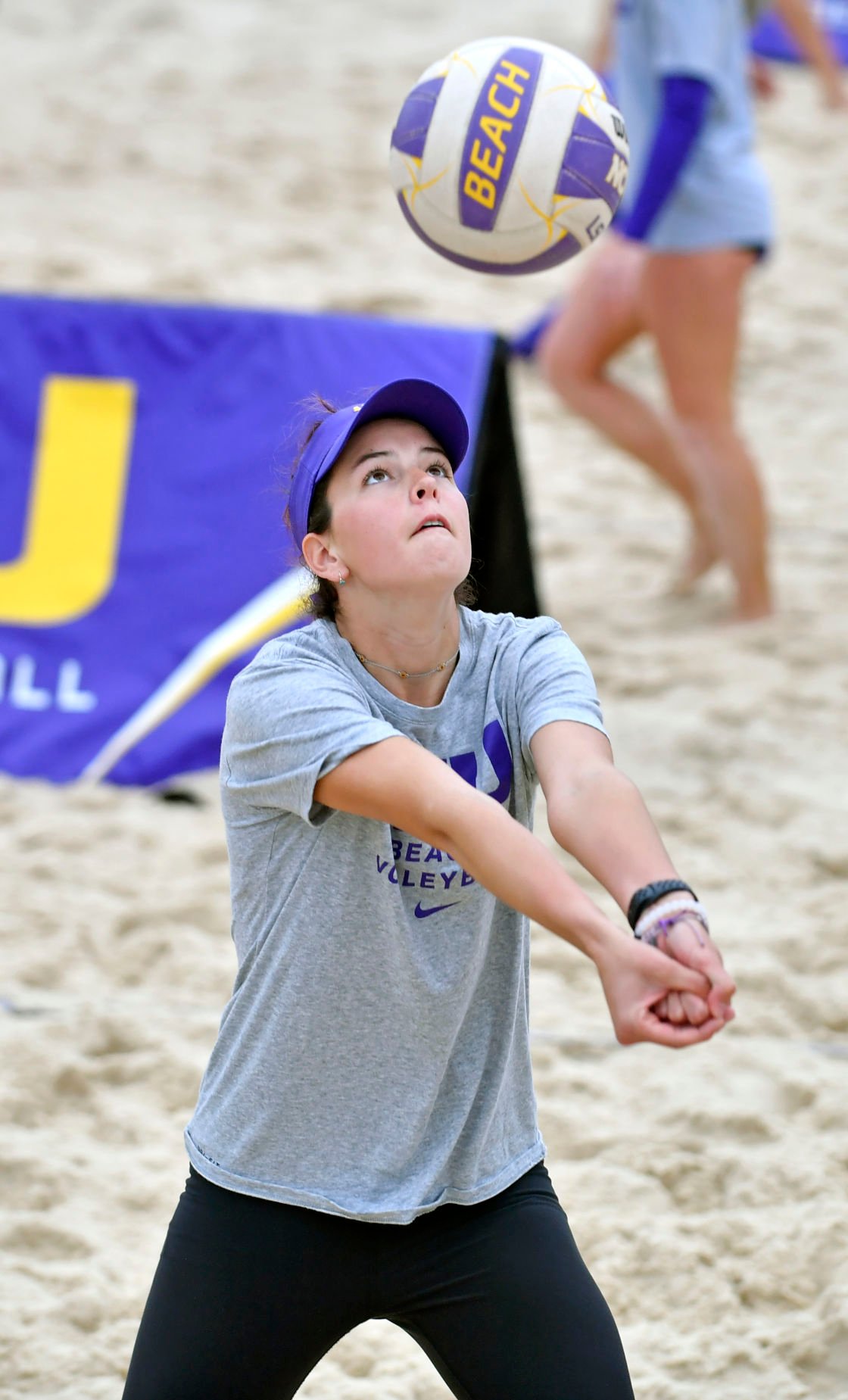 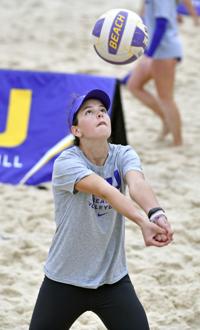 LSU's Allison Coens, left, and Hunter Domanski celebrate a point during their match-clinching victory against Stetson in the NCAA Championship on Friday, May 3, 2019 in Gulf Shores, Alabama.

A mean north wind cuts across LSU on a gray, wintry February Wednesday, everywhere raw and damp and inhospitable.

Everywhere, that is, except for an oasis on the north side of the campus, a giant rectangle of specially refined sand, colorful volleyballs … and volleyball players, flying in all sorts of directions.

And palm trees, the only spectators, swaying next to the big purple scoreboard.

Beach volleyball is LSU’s newest varsity sport, about to begin its seventh season. There’s a chance you still might not know of its existence — or where LSU’s beach volleyball stadium is — but there is a very good chance you will hear of this program’s success in the months to come.

LSU has made three straight trips to the NCAA championship tournament, held annually in Gulf Shores, Alabama, an eight-team event that is beach volleyball’s version of baseball's College World Series. The 2019 season was LSU’s most successful of all. The Tigers went 31-8, won two matches at NCAAs for the first time and were a 3-2 loss to Southern California away from reaching the NCAA final against eventual champion UCLA.

The 2019 Tigers may have surprised, but people who know beach volleyball believe the 2020 Tigers have arrived. LSU is ranked No. 2 in one national poll and No. 3 in the other. The numbers translate into the words “national championship contender.”

The Tigers say they’re ready for the spotlight as they try to make LSU the first school not named USC or UCLA to win the title.

“I like to call it ‘good pressure,’ ” sophomore Allison Coens said. “I think our team has done a really good job in the past of performing under pressure. We’ve always been solid, like tied 2-2 with a team we feel confident we can go out and win that last game (to win the match).

“We feel confident in our abilities. We’ve trained so long this year we truly believe nothing can stop us. This is a really special group of girls.”

LSU coach Russell Brock planned it exactly this way. Well, not planned, but when he and volunteer assistant coach Drew Hamilton arrived before LSU's inaugural 2014 season, they figured 2020 could be the year the program reached its full maturity.

“This is the year we looked at as the real possibility of having a team that could compete,” said Brock, a Baytown, Texas, native who played indoor volleyball at USC (there is no NCAA version of men’s beach volleyball). “Along the way we probably jumped ahead of the timeline a little bit, getting to nationals a year early and finishing high a year early (in 2019). But the vision was strong and it was realistic given the support we got and the stadium and the training going well.”

After playing their first five seasons at Mango’s Beach Volleyball complex off Sherwood Forest Boulevard on the east side of town, the Tigers moved into their own dedicated beach volleyball stadium in January 2019. LSU converted it’s old W.T. “Dub” Robinson Tennis Stadium after building a new tennis complex near Alex Box Stadium.

Beach volleyball is perhaps best played on the beach — LSU opens the season Saturday on Queen’s Beach in Honolulu in the Duke Kahanamoku Beach Classic — but Brock said he has the best on-campus facility in his fast-growing sport. In addition to palm trees, it has cabanas at both ends where teams can gather during play (every weekend on LSU’s schedule is some sort of tournament home or away), room for few couple hundred fans up top, a modernized clubhouse below.

“This facility is amazing,” senior Kristen Nuss said. “I kind of call it my home. I spend more time here than in my apartment. In between classes we have a place to come and hang out and grab some food. It’s so awesome the university has given us a place to play on campus, that they believe in us and want to grow the sport of beach volleyball. It makes you want to come here and fight and grow this program.”

Nuss, who played indoor volleyball for Mount Carmel Academy in New Orleans, is LSU’s best player. This week she was named CCSA preseason player of the year, CCSA being the name of LSU’s beach volleyball conference. The sport isn’t sponsored by the Southeastern Conference because only one other school, South Carolina, currently plays it.

Nuss is half of LSU’s Court No. 1 duo with fellow senior Claire Coppola. Both preseason All-Americans, they’ve played every match of their college careers together, going a combined 91-19.

Coppola, a 6-foot-1 native of Scottsdale, Arizona, plays at the net as the blocker. Nuss, who happens to be LSU’s second-shortest player at 5-6, is the crafty defender.

“That definitely comes along with being 5-6,” she said. “You have to be a little crafty.”

Nuss and Coppla aren’t the only top players returning for LSU. The Tigers are loaded with them, including Coens and junior Hunter Domanski, who went 29-8 last season, 22-6 paired with Coens on Court 5.

Nuss said the beach volleyball team was inspired by the LSU football team’s run to the national championship. In her mind's eye, she sees herself and her teammates dogpiling on the sand in Gulf Shores after they do the same.

“Since I was a little kid I’ve been a big LSU fan, dreaming of wearing that LSU across the chest,” Nuss said. “Now to be able to do that and potentially compete for a national championship, it means a lot.”

Nuss, Coppola and Powers all came to LSU as freshmen together, the first time the program has had seniors who competed all the way through for four seasons.

“They came in with a vision and are leaving it as a reality,” Brock said.

A reality that could include an NCAA championship trophy.

• A beach volleyball match consists of five matches between two-person teams (there is often an exhibition match on an outlying court). The players are called the blocker and the defender.

• Beach volleyball is one of 10 LSU sports that requires no admission charge to regular season home events.

• The LSU Beach Volleyball Stadium is located on the site of the old W.T. “Dub” Robinson Tennis Stadium. It is located on the north side of LSU’s campus, just north of the Gymnastics Training Facility and the Pete Maravich Assembly Center off Cypress Drive.

March 6-7 Fight in the Fort tournament Fort Worth, Texas