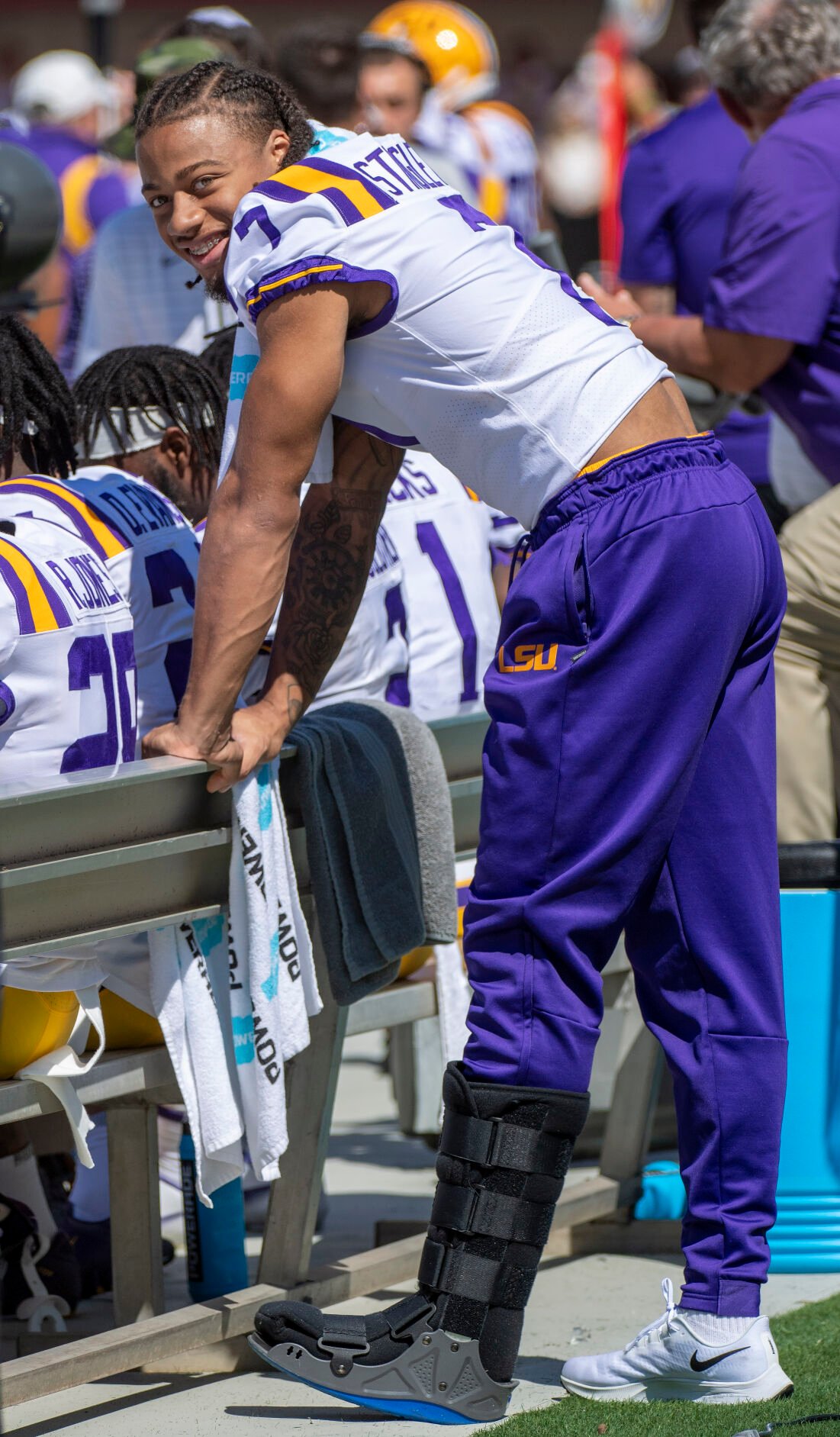 LSU cornerback Derek Stingley Jr. (7) talks to teammates from behind the bench while sporting a boot on his left foot during the Mississippi State game on Saturday, Sept. 25, 2021 at Davis Wade Stadium in Starkville, Miss. 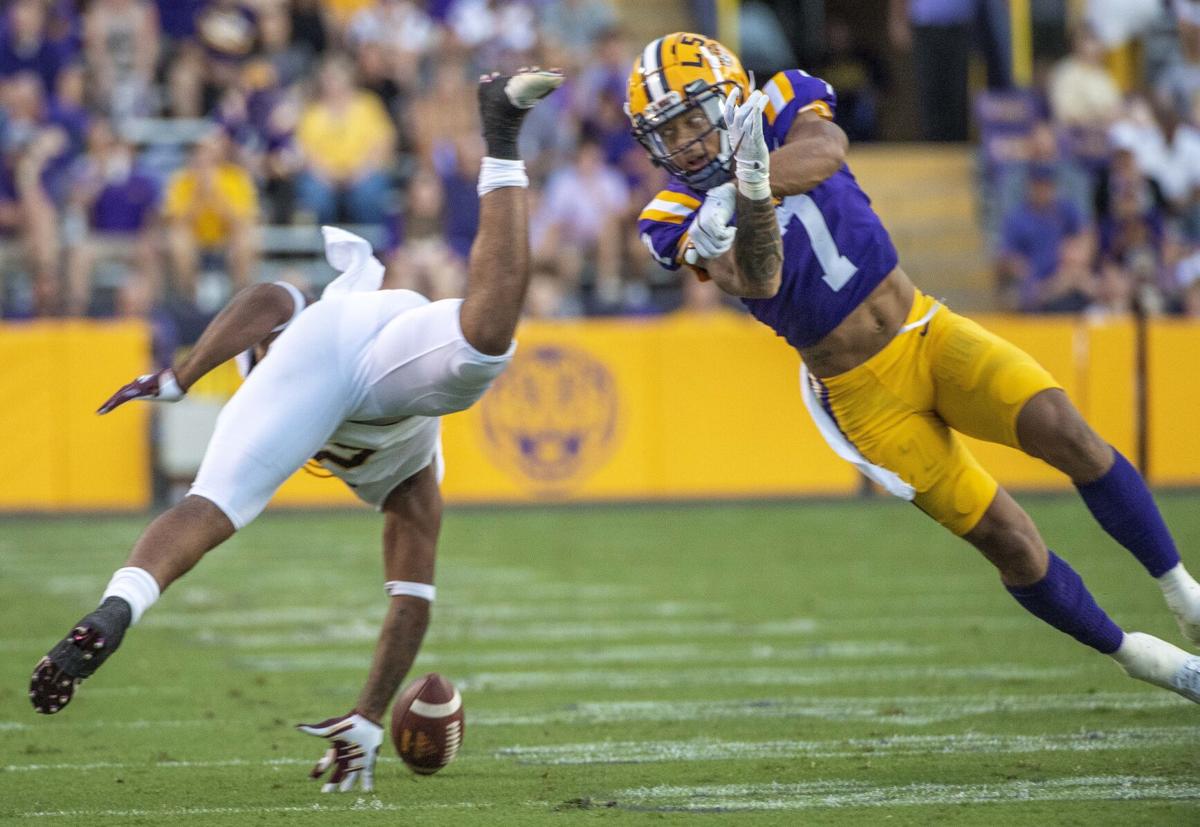 Central Michigan running back Darius Bracy (2) fumbles the ball after being hit by LSU cornerback Derek Stingley Jr. (7) during the first half at Tiger Stadium on Saturday Sept. 18, 2021. LSU defensive end Andre Anthony picked up the fumble and scored on the play.

LSU cornerback Derek Stingley Jr. (7) talks to teammates from behind the bench while sporting a boot on his left foot during the Mississippi State game on Saturday, Sept. 25, 2021 at Davis Wade Stadium in Starkville, Miss.

Central Michigan running back Darius Bracy (2) fumbles the ball after being hit by LSU cornerback Derek Stingley Jr. (7) during the first half at Tiger Stadium on Saturday Sept. 18, 2021. LSU defensive end Andre Anthony picked up the fumble and scored on the play.

It was in the final days of 2018 when the LSU Tigers gathered in a massive hotel ballroom in Scottsdale, Arizona, for their team media day in advance of a Fiesta Bowl appearance against Central Florida.

One of the biggest topics for then-defensive coordinator Dave Aranda wasn’t stopping the Golden Knights’ offense, but how a mid-term high school graduate/phenom named Derek Stingley Jr. performed in LSU’s bowl practices before the team left for Arizona.

“He’s looks like the best guy we’ve got,” said Aranda, now the head coach at Baylor and not a man given to streams of hyperbole. “In the practices we had, I think he had three picks.

“Before it’s all over, he’s going to be something.”

Stingley proved Aranda a prophet the following fall. With his All-American turn at cornerback on LSU’s national championship team — leading the Southeastern Conference with six interceptions — and his talents as a punt returner, he was the most impactful freshman defensive back for the Tigers since Tyrann Mathieu nine years earlier. Those are the kind of players upon whom LSU’s self-styled reputation as “DBU” has been built.

LSU's Derek Stingley Jr. out indefinitely after foot procedure, will try to 'play again this year'

LSU announced Wednesday that Stingley has undergone a procedure on his injured left foot that has plagued him throughout this season and is out indefinitely.

That’s what LSU has to say. That certainly has to be what the Stingley family would like to say about the situation, given his expanding portfolio of NIL deals and his sure-fire first-round NFL draft stock. The brand that is Derek Stingley Jr. must be protected as much as possible.

But as anyone who saw “City Slickers” back in the day knows, a procedure is a convenient euphemism for surgery (“You’ll call it a procedure, but it’s a surgery.”). Given where LSU is in the season — seven games and eight weeks to go — and the potential of enormous wealth awaiting him in the NFL, the opinion here is that Stingley has played his last snap for LSU.

In the LSU statement, Stingley said: “I want to finish out the season with my teammates and I will do everything I can to get healthy so that I will be able play again this year.”

Noble sentiments. But I have to believe the next time you see Stingley suit up it will be for some woebegone NFL franchise that chose, wisely, to use its first-round pick to anchor rebuilding plans around him.

If Stingley is done, a lot of questions are left behind at LSU, starting with how to judge his career. A career that has produced diminishing returns, from starting all 15 games of the Tigers’ title run in 2019 to seven games in 2020 to playing in LSU’s first three games of 2021 against UCLA, McNeese State and Central Michigan. Eight tackles and one forced fumble is his stat line this season.

It’s a complicated legacy to figure out. Stingley had one of the greatest single seasons of any LSU defensive back. But it is difficult to put him in the same category as a Patrick Peterson, who won the Chuck Bednarik and Jim Thorpe awards. Or Tommy Casanova, LSU's only three-time All-American from 1969-71, a feat Stingley once seemed destined to match. Or safety Grant Delpit, who was a two-time All-American and Thorpe Award winner. Or even Mathieu, who played only two seasons before being dismissed from the team but not before he was a 2011 Heisman Trophy finalist.

Talent and exceptional play count for a lot, but so does longevity. Durability. Ken Griffey Jr. was one of the greatest outfielders ever, but injuries keep him from being mentioned in the same breath as Willie Mays. Tiger Woods won 15 major titles, but injuries and personal setbacks will keep him from matching or surpassing Jack Nicklaus’ record haul of 18 majors.

At this point one must say Stingley is down the list of LSU players to wear No. 7. His greatest season was wearing No. 24. With all respect to the No. 18 tradition, No. 7 is the most decorated number LSU has. No less than seven players earned All-American honors while wearing it (Peterson, Mathieu, Delpit, Leonard Fournette, Bert Jones, Trev Faulk and Ali Highsmith).

As for the present, Stingley’s injury won’t make job security any easier for LSU coach Ed Orgeron to establish. It’s hard to argue Orgeron is or should be on the hot seat, but significant injuries and issues have pummeled LSU’s roster since the preseason. Stingley joins a long list of key players who haven’t played or missed significant time, including quarterback Myles Brennan, running back John Emery, defensive tackle Glen Logan, linebackers Andre Anthony and Jared Small, and offensive tackles Cam Wire and Austin Deculus. Now add starting safety Major Burns to the list, who Coach O said will be sidelined against Kentucky (6:30 p.m. Saturday, SEC Network).

That said, Dwight McGlothern has done a commendable job of filling Stingley’s position. After him there aren’t a lot of good options though, other than moving versatile safety Jay Ward to corner, or playing Raydarious Jones or Darren Evans.

LSU fans can hold out hope that Stingley and his immense talents will return. More likely, though, they will have to hold on to the great memories, bright and brief, then look forward to cheering him on Sundays.

Ed Orgeron's sharp response to a prank caller on his radio show: 'Fishing hole for people like that'

Banter between a coach and a fan isn't uncommon for LSU football coach Ed Orgeron at any point, let alone this season.