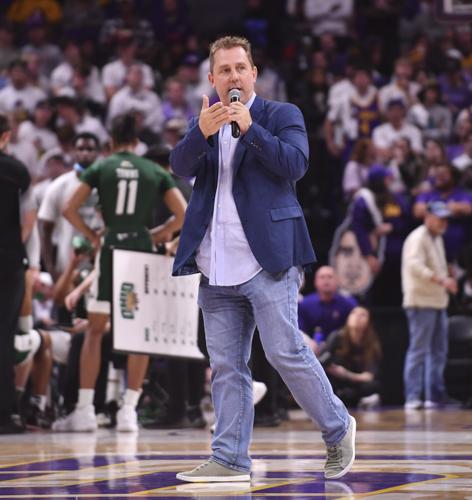 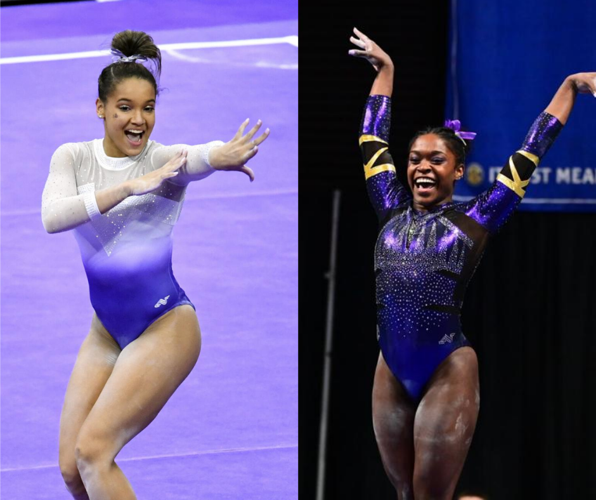 LSU gymnasts Haleigh Bryant (left) and Kiya Johnson both scored perfect 10s for the Tigers on Saturday against Auburn.

LSU gymnasts Haleigh Bryant (left) and Kiya Johnson both scored perfect 10s for the Tigers on Saturday against Auburn.

The fans at the LSU men’s basketball game Wednesday night against Ohio came out to cheer on an undefeated Tigers team and new LSU football coach Brian Kelly at halftime.

LSU gymnastics coach Jay Clark also was there with an important reminder that brought roars from the crowd.

“LSU,” Clark said as he stood at midcourt, “is a gymnastics school.”

The drive for the 2022 season begins Friday night with LSU’s annual Gymnastics 101 exhibition meet. The event begins at 7:15 p.m. at the Pete Maravich Assembly Center.

The aim is to put on a good show for the fans and get them excited for the season, which begins at home Jan. 7 against West Virginia. But Friday’s show will be limited somewhat by a wave of illness that has swept through the Tigers in recent days.

“We’ve had rampant flu and other non-COVID-related viral things going on,” Clark said. “But I’d rather it be now than later.

“Fortunately, we have a lot of bodies to be able to put something out there. We’ll have eight (gymnasts) on every event. We hoped we would put 10 or so and show a lot, but it’ll be a lot of new faces.”

“She’s made it very clear to us that this is her time,” Clark said of Aleah Finnegan. “You’ll see the similarity in their gymnastics. Aleah is a vastly talented young woman and more engaging (than Sarah).”

It also will be the first time seeing the PMAC close to years past after LSU’s 2020 home meets were limited to about 25% arena capacity.

“I’d love to see 5-6,000 fans Friday night,” Clark said. “A lot of kids in our freshman class last year didn’t get to experience what a packed PMAC feels like.”

With five gymnasts returning for their fifth “COVID year,” LSU has 20 competitors on the roster. Only two of the five, Sami Durante and Sarah Edwards, are expected to perform Friday night because of illness.

Also out is sophomore Olivia Dunne, who has made a huge splash during the NIL era as one of the most visible college athletes in the country. LSU will be getting performances from sophomore Haleigh Bryant, the 2021 NCAA vault champion; junior All-American Alyona Shchennikova; and junior All-American Kiya Johnson, the 2021 SEC floor champion.

Clark said Johnson continues to be troubled by a now chronic Achilles’ tendon issue that will keep her off floor tonight and possibly well into the regular season.

“Our goal is to have her when we need her,” Clark said. “There’s no way I’d risk Kiya’s health for a practice meet in the PMAC.”

There is no charge for admission Friday night. The meet will be preceded by a fan fest event from 5-7 p.m. in front of the PMAC with food trucks and activities.