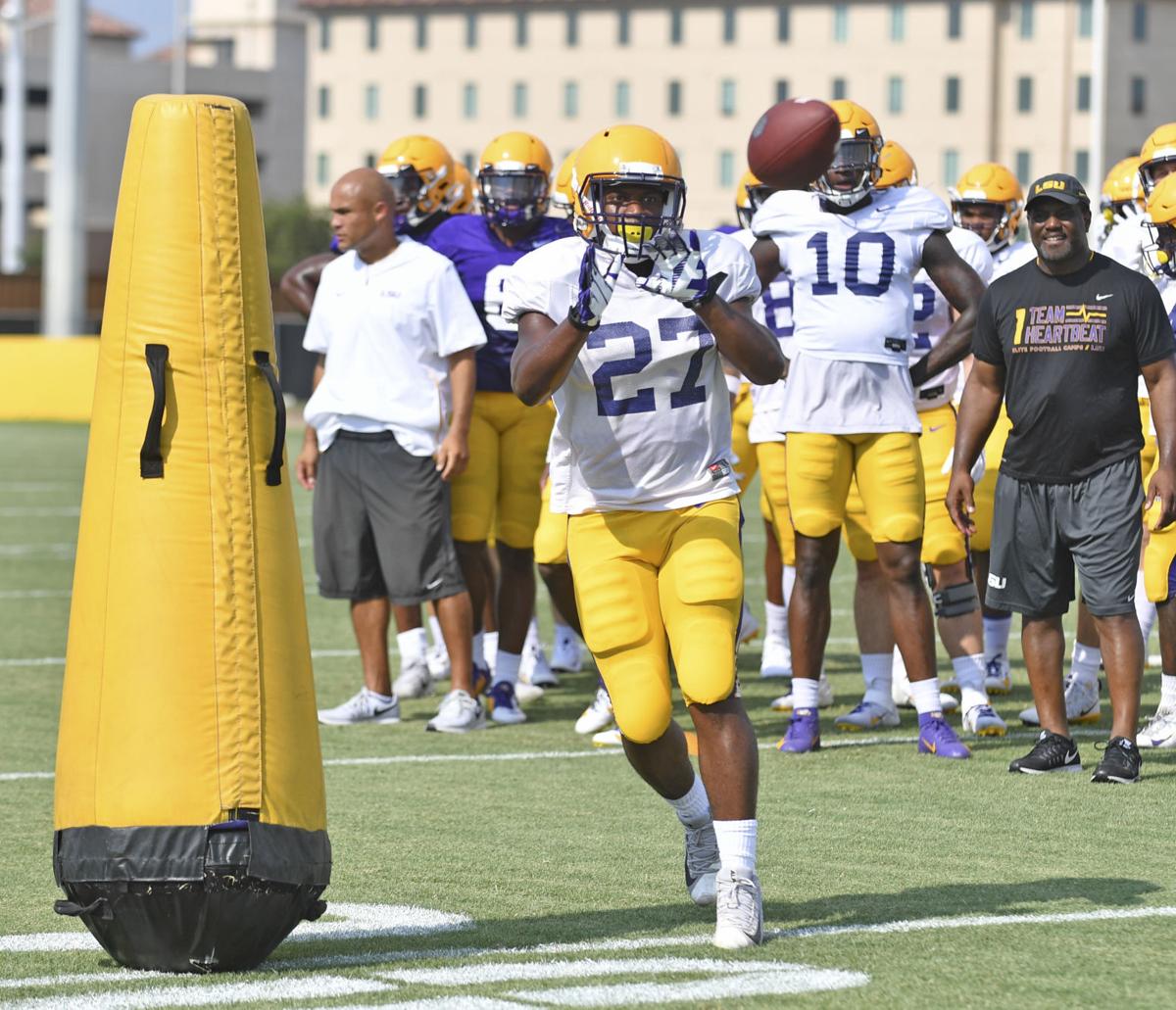 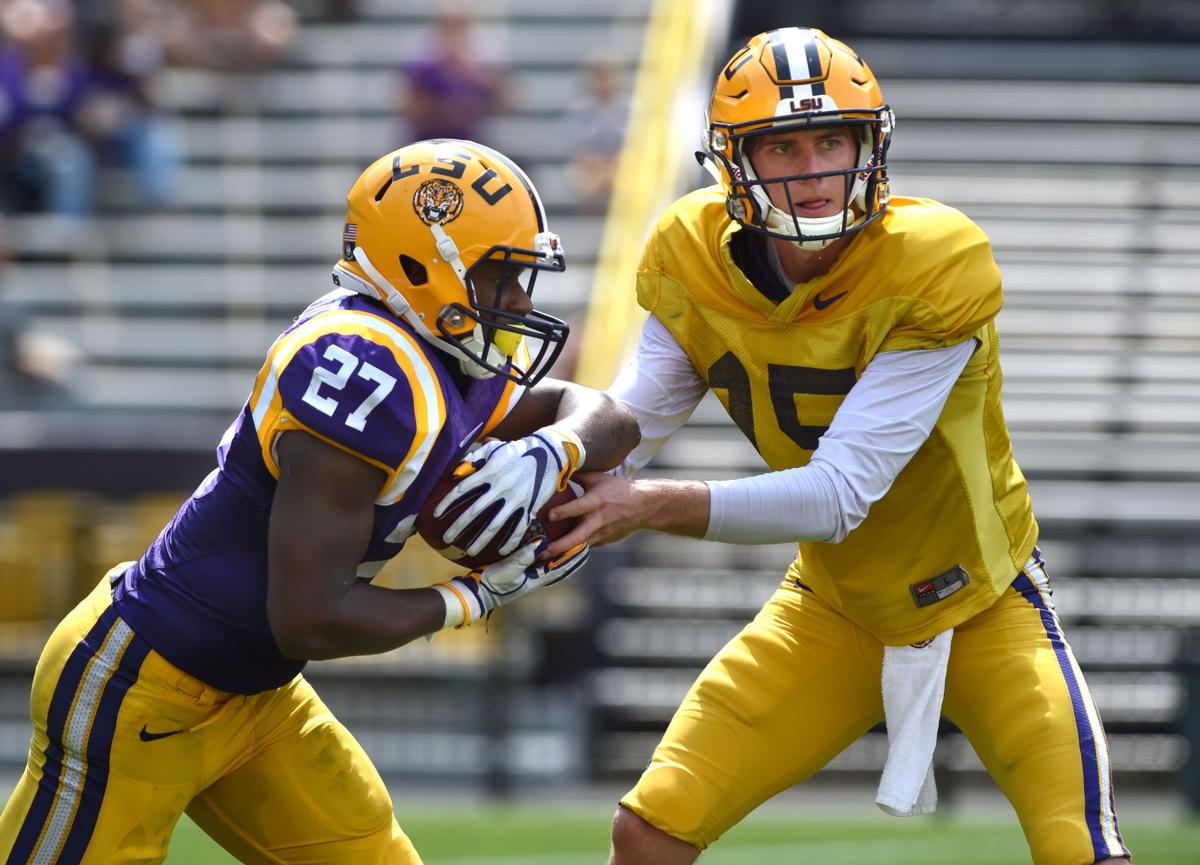 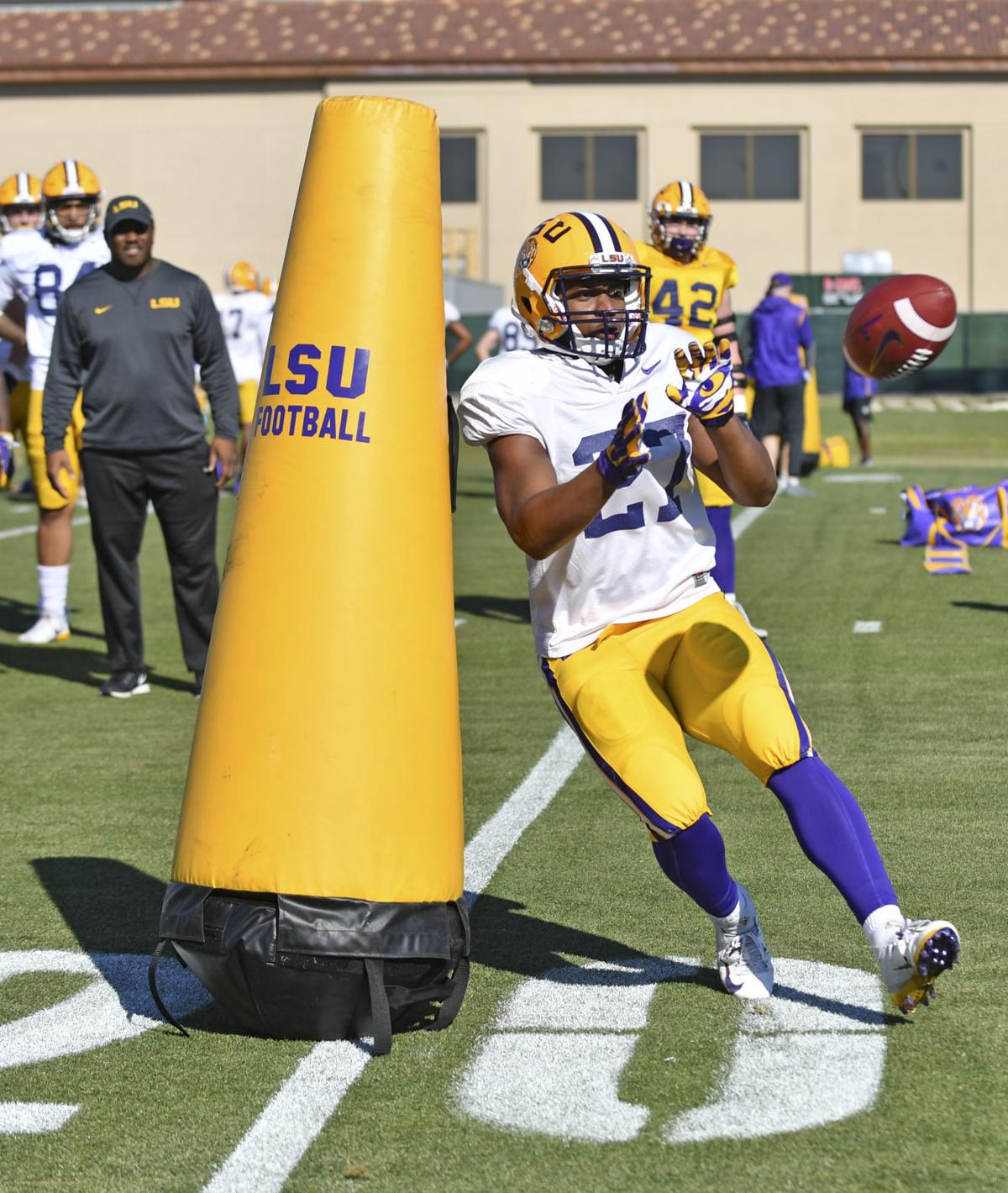 LSU running back Lanard Fournette (27) makes the catch in a drill during spring practice, Thursday, March 21, 2019, on LSU's campus in Baton Rouge, La.

LSU running back Lanard Fournette (27) makes the catch in a drill during spring practice, Thursday, March 21, 2019, on LSU's campus in Baton Rouge, La.

When Lanard Fournette’s number was called for the first offensive play of LSU’s season opener last September, he almost couldn’t believe his ears.

Fournette was jogging off the field after serving on the punt return team following a three-and-out for Miami’s offense when he heard someone yelling “27 … 27!”

Just like that, with no advance notice, the redshirt junior running back turned and stepped into the Tigers’ huddle for the first start of his nine-game college career.

Nearly a year later, he can’t remember the name of the play that came from the sideline to new quarterback Joe Burrow — who relayed it to his teammates.

What’s more important is Fournette remained calm and carried out his assignment while trying to process what had just happened.

“It was a big shocker, because I wasn’t expecting (to start),” he said. “But I jumped right in and did what I had to do for the team.”

Lined up just to the right of Burrow, who was in the shotgun, Fournette flared out and caught a little 5-yard swing pass to start the Tigers’ first scoring drive of the season.

“I knew I was getting the ball because of the way the defense was set up,” he said. “I knew I was going to come wide open, and I caught it in the flat and went upfield for a few yards.”

Even though he had meager career stats of 20 yards on six carries in limited playing time before that, Fournette read the defense pre-snap like a seasoned veteran.

“The defensive end slanted in (to pass rush) and nobody was outside, so I turned my head quick because Joe had a little pressure,” he explained. “I just knew I was getting the ball right there.”

It was the first reception and just the seventh touch of Fournette’s career. Until then, he was best known to most everyone outside the LSU program as the little brother of former Tigers running back Leonard Fournette, a consensus All-American in 2015.

Now entering his senior season, Lanard Fournette still flashes a huge smile when asked about the biggest moment in his career to that point.

And it’s not because he had been waiting to run out of his brother’s gigantic shadow, as most people think.

Actually, that was over a long time ago.

“I never looked at myself as being in my brother’s shadow,” Fournette said. “I guess that was kind of everybody else’s outlook on it. I always looked at it as, ‘I’m me … we’re two different people.’ I just always did my own thing and not listened to anybody else.”

While that first play against Miami was his only touch in LSU’s 33-17 blowout win, Fournette went on to play in all 13 games with two starts.

For the year, he rushed for 106 yards on 12 attempts, picking up his first career touchdown on a 3-yard run against Rice, and added six receptions for 55 yards.

Just like the Miami game, he started and caught a 9-yard pass from Burrow. Fournette later had a career-long 46-yard run to finish with 48 yards on two carries and also caught two balls for 28 yards.

The one thing that makes the younger Fournette more excited than talking about his surprise start against Miami is LSU’s new-look spread attack of offensive coordinator Steve Ensminger and passing-game coordinator Joe Brady.

“They’re using us more as receivers, but I think I fit either way,” Fournette said. “I think I’m very versatile, but it fits all our running backs because all of us have different running styles.”

Based on what he did last season and the fact that the spread helps gets speedier players out in open space, coach Ed Orgeron believes Fournette is set up for a breakout season.

“He’s got some stuff out of the backfield in this spread that fits,” Orgeron said of the 5-foot-11, 200-pounder. “He’s really catching the ball, running the ball well. … He’s going to play for us this year and play well.

“He’s got a little wiggle. In the spread offense, he’s going to make one guy miss.”

With one season remaining, Fournette hopes to make his big brother, who is entering his third season with the Jacksonville Jaguars, proud.

But he isn’t going overboard just yet on his goals and aspirations.

"But I do expect a lot of myself … so any time I get a chance, I expect the best.”