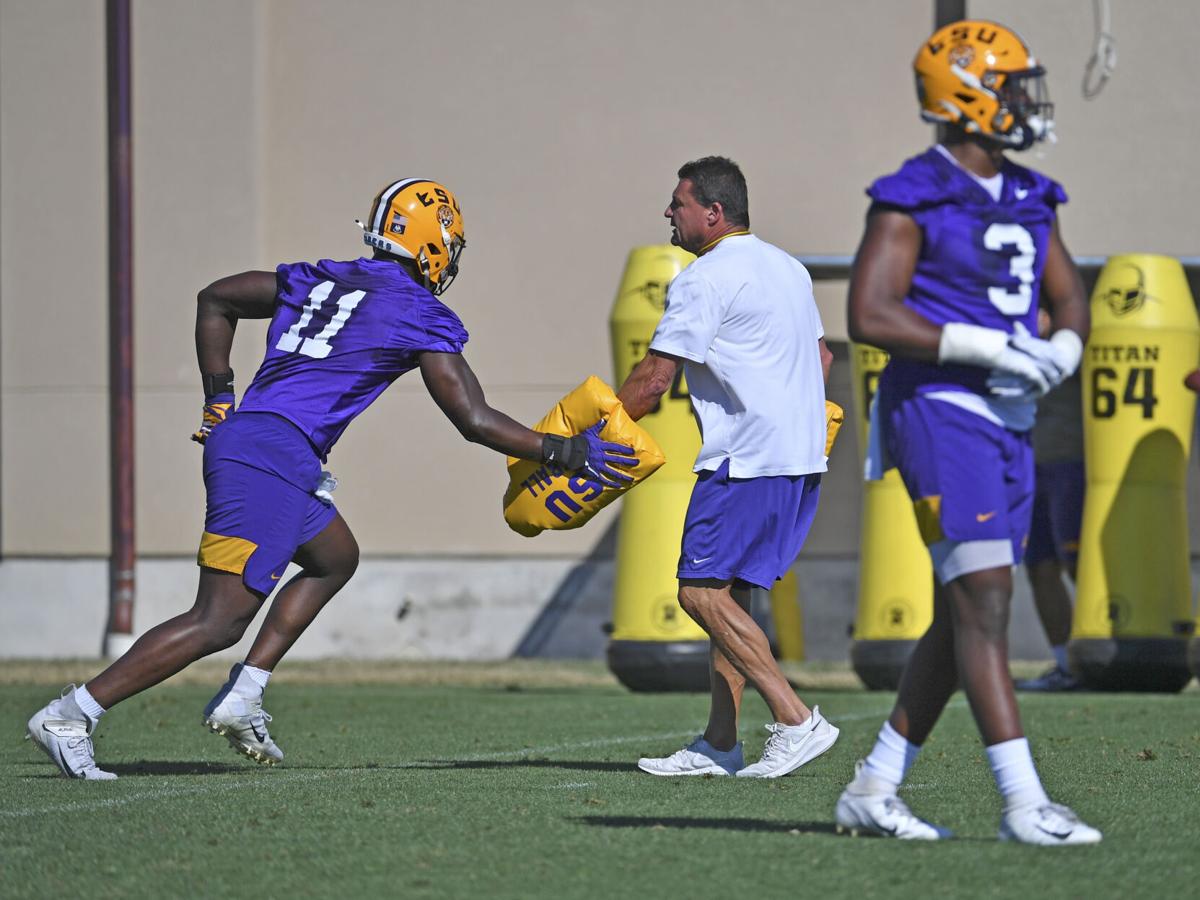 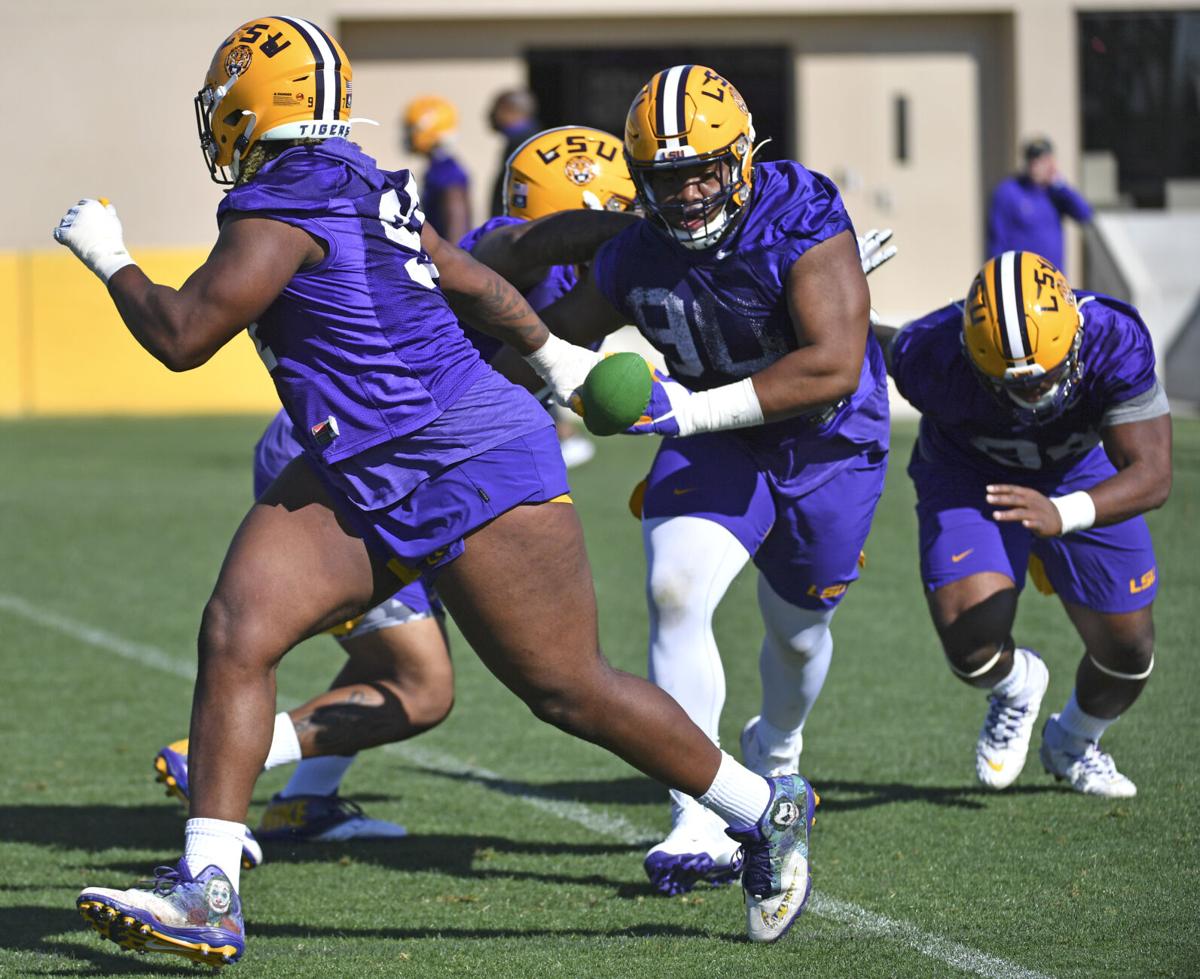 The pandemic struck hard in Neil Farrell's family when the LSU defensive tackle's grandmother was hospitalized with coronavirus in August of last year.

The scare was enough for the starting lineman to briefly leave campus and care for his family. It was enough of a concern that Farrell stayed away from the team for over a month.

Farrell returned when his grandmother recovered. He returned in time to play in LSU's jarring 44-34 home loss to Mississippi State in the season opener, when an embarrassing collection of points and yards became the first pile in a mountain of errors the Tigers' defense was unable to clear in the team's 5-5 season in 2020.

That initial loss spoiled a return Farrell always intended to make. He told reporters Thursday, "I always had in my mind that I was going to come back" when his grandmother got better. The return could've been in 2020 or 2021, but, after she healed, Farrell said coaches and players reached out to check on him.

So he decided to come back.

"Things didn't go how I wanted it to," Farrell said. "But that's why I came back for another year. Make things right for this season."

LSU linebacker Damone Clark can't hide after trying 2020 season — and he doesn't want to; 'He went through hell'

The entire starting defensive line has returned for the same reason. It's a talented position group that provided the most stability on LSU's rocky defense last year, and, after adding top talent like five-star freshman tackle Maason Smith, the unit could emerge as one of the best defensive lines in the Southeastern Conference.

It's also notable that each player announced their decision before they knew who would be their next defensive coordinator. Head coach Ed Orgeron, a widely respected defensive line coach who spends hands-on time with LSU's front four, took the lead on re-recruiting his players before he hired Daronte Jones to replace Bo Pelini after just one season.

Along with the defensive line, and the entire starting offensive line, Orgeron said LSU has 33 returning players who started in at least one game.

"There's a lot of difference this year," Orgeron said. "That doesn't mean it's going to make a difference. But I expect to have a good team this year."

Junior college transfer Ali Gaye might've been selected in the early rounds of the NFL draft after an impressive first season as LSU's left defensive end — a powerful edge-setter who made second-team All-SEC after leading the Tigers with 9½ tackles for loss.

The 6-foot-6, 262-pound Gambia native lived up to Orgeron's expectations, and, now, he's returning after the head coach joked early last season that "hopefully he stays for two years" and "don't get too good."

"I just feel like I didn't want that to be just my year, the only year that I had here at LSU," Gaye said. "I had a vision for being here, which was winning games and building a strong bond with my teammates and the guys that I've gotten close with."

Andre Anthony, LSU's returning right end, took Gaye under his wing when the talented prospect arrived last offseason. Gaye said Anthony "looked out for me" and helped him get settled in Baton Rouge. Then, when the pandemic hit, they quarantined together on campus. They watched film, ran hills and worked on pass-rush drills. Anthony blossomed into LSU's top pass rusher, leading the Tigers with 5½ sacks in 10 games.

The two seniors remain intense accountability partners, Anthony said. They're "always going back and forth" during spring practice, not letting any mistakes slide from themselves or any of their teammates on the defensive line.

"As a whole, we always on each other's butts about everything, you know?" Anthony said. "We're not going to let nothing slide, because we expect more out of each other."

Orgeron has set a spring expectation for the team "to get back to playing LSU's style of football on defense" — a physical and tough unit that cuts down on last year's problematic quantity of explosive plays while maintaining the aggressiveness that had LSU ranked 39th nationally in total sacks (24) and 28th in total tackles for loss (63).

"I'm telling you in the meeting room, we do feel the energy when he explains some of the things," Gaye said. "When we go out there, we want to replicate that same energy."

Energy is one thing. Controlled energy is another. An up-and-down range of emotion followed an LSU defense that led the nation with four interceptions returned for touchdowns while also surrendering the most plays of over 40 yards (24).

For that reason, "communication" might as well be the official word of LSU spring practice. Jones used the word (or some variation of it) 10 times during his introductory news conference to outline LSU's goal going forward.

Anthony joined the multitude of players who've since echoed the sentiment, saying everyone "was on different pages" last year. Now, once a defensive call is made, the team is relaying it from one level to the other and back down again.

"That communication is definitely something we pride ourselves on this offseason," Anthony said.

When the LSU defense can trust its understanding on the field, then it can reliably send pressure at opposing backfields. Pressure is a mainstay in Jones' defense, Anthony said, where "you never know where it's coming from."

A ranging safety. A blitzing linebacker. A stunting lineman. These were all threats in the Pelini defense, but, under Jones in 2021, the Tigers are going to have to show opponents they can do this effectively.

Which brings us back to the reason these defensive linemen returned in the first place.

"We've got a point to prove," Farrell said.

What's a general manager? An inside look at a growing trend in college football

How rare was Myles Brennan's injury? There was almost a surgery named after him

Ed Orgeron's 2021: Winning expectations, 'sense of urgency' and AD's warnings to stay out of politics

Just more than a week ago, a moving truck towed away the national award LSU's offensive line won during the 2019 season.