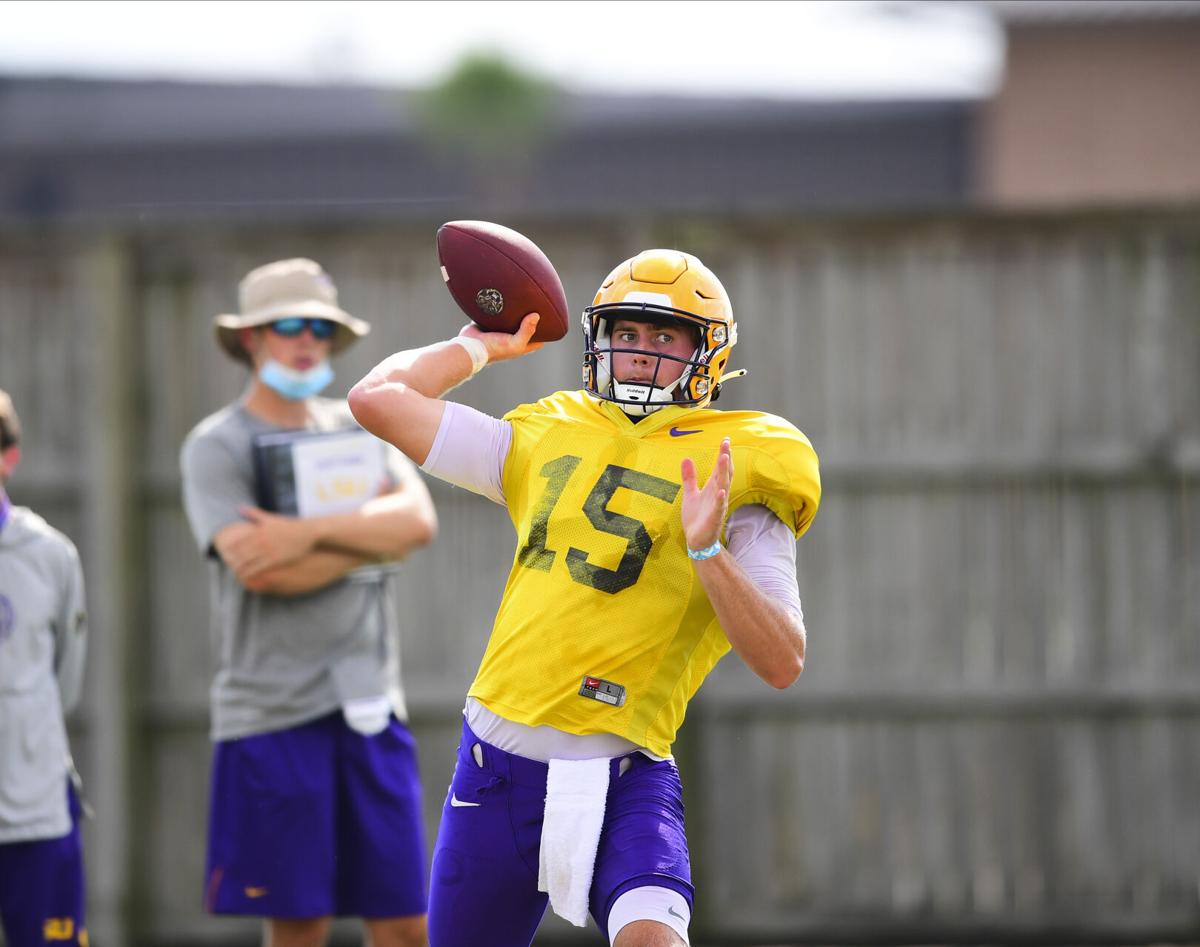 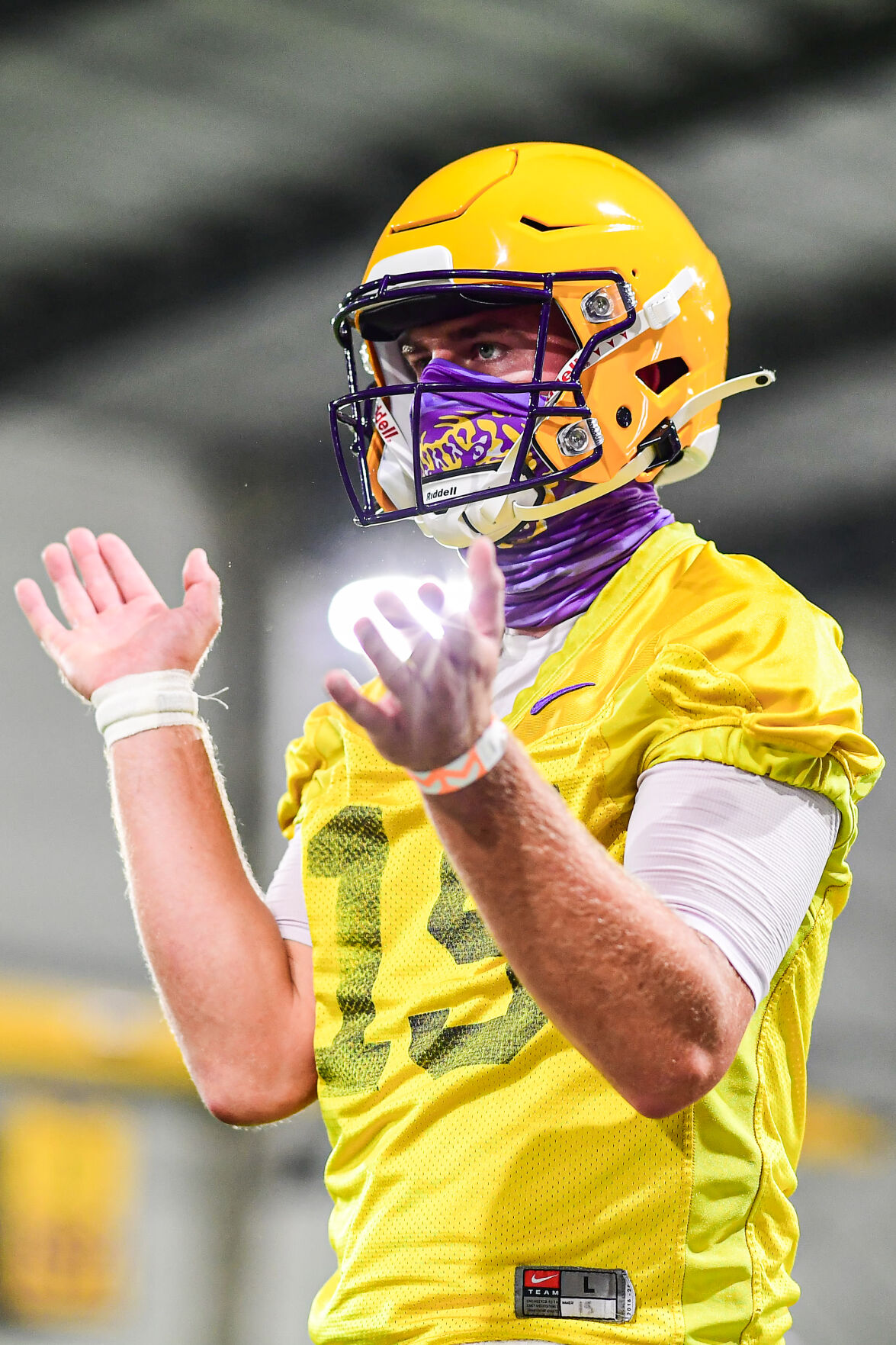 Myles, I'll unmute you if you just click that button for me.

The LSU quarterback reached for the computer. A few dozen reporters were waiting within the Zoom call's virtual squares like a journalistic Brady Bunch. They wanted to hear what Myles Brennan had to say.

Back to back Heismans for LSU football? Myles Brennan third in preseason odds

Truly, it would be difficult to draw up a more turbulent four years for Brennan — a 21-year-old who committed to a coach who was fired, learned four play books from two offensive coordinators and three passing game coordinators, got leapfrogged by an eventual Heisman Trophy winner, only to have a global pandemic shut down football once the path finally seemed clear.

There still is no guarantee that a 2020 football season will happen, but, on this Thursday, Brennan was mostly unrestricted, unrestrained.

"It's been crazy," Brennan said of his career arc.

"All that's just going to prepare me to be a better person in the end and be stronger," he said. "Without adversity, I wouldn't be as strong as I am today."

Myles Brennan has personal coronavirus bubble ahead of LSU season; here's what it looks like

It's the sort of perspective that endears Brennan to Ed Orgeron, a coach who values loyalty and patience in his players and never has spoken too favorably about the advent of the NCAA's transfer portal.

Orgeron often said Brennan would be a championship quarterback in a matter of time, even while Joe Burrow was leading the Tigers to the school's fourth title in a dizzying 2019 campaign that shattered offensive records.

Orgeron said it again in July, during an appearance at a virtual Baton Rouge rotary club meeting.

"Let me say this to you: I believe in Myles Brennan," Orgeron said. "I believe he has tremendous talent. I believe that he's going to have a great year."

Still, the coach called the quarterback position "an open competition" that Brennan is "going to have to earn." Brennan himself said he's "still fighting each and every day to earn that position."

Backed up by true freshmen Max Johnson and TJ Finley, it is a long shot that anyone other than Brennan takes the first snap when LSU opens the season against Mississippi State in Tiger Stadium on Sept. 26.

Brennan even has the third-best chance to win the Heisman in 2020, according to BetOnline.ag, with 14-1 odds that by far eclipse Burrow's 200-1 preseason odds a year ago. Only Clemson quarterback Trevor Lawrence (2-1) and Oklahoma quarterback Spencer Rattler (9-1) have lower odds.

Call it confidence in Brennan. Call it confidence in an LSU offense that has advanced beyond the dark ages and is overflowing with talent like Biletnikoff Award winning receiver Ja'Marr Chase and five-star tight end Arik Gilbert, last year's high school Gatorade National Player of the Year.

There's a clear expectation for Brennan to succeed even though he's never started in an LSU football game, even though wunderkind one-year assistant Joe Brady is now in the NFL.

Brennan showed promise last season, completing 24 of 40 passes for 353 yards, one touchdown and an interception in eight games that had gotten out of hand. And in tandem with offensive coordinator Steve Ensminger and new passing game coordinator Scott Linehan — a former NFL head coach — Brennan appears to be in command of another potent offense.

Preseason camp began Monday, and, after three practices, senior safety JaCoby Stevens said "it's pretty hard" to defend Brennan. He knows his checks. He reads coverages well. With his well-documented strong arm, Brennan can launch deep passes for speedy wideouts like Chase and Terrace Marshall and Racey McMath to just go out and get.

"He makes you cover the entire field," Stevens said.

No one is all too surprised that Brennan is this mentally prepared. Studying film was one of the few things he could do during the COVID-19 shutdowns. Orgeron said they've installed the offense five times already. Brennan has lost track of a real number, which is stacked up in the virtual repetitions of 8 a.m. Zoom meetings that began back when every player was quarantining at home.

Virtual has never been enough for Brennan. He can't sit still. Even as a kid, his parents, Megan and Owen, couldn't keep him in front of any Disney movie.

"I don't think he's ever watched a two-hour movie in his life," Owen said. "He cannot sit through a movie. He's never been to a movie theater. He doesn't watch movies at home. He cannot sit for two hours. Period."

Breaking down every LSU opponent on its new, 10-game SEC schedule

Brennan, a descendant of New Orleans restaurant royalty, has the pedigree to be active. Megan was a Tulane volleyball and women's basketball player, the first woman to earn an athletic scholarship for the Green Wave. Owen, a former Tulane linebacker, is the grandson and namesake of the founding father of the Krewe of Bacchus.

Boredom captured Brennan quickly at their family's home in Long Beach, Mississippi, during the initial spread of COVID-19. Health clubs were shut down. Gyms, too. Schools weren't allowing anyone onto their football fields or facilities.

Owen had the classic cure: He enlisted Brennan and his older brother, Hunter, to clear out a large stretch of oak trees, magnolias and three-foot Goldenrod grass on the family's nine-acre property.

Out came the chainsaws and weed trimmers and lawnmowers. Brennan soon realized throwing huge tree limbs into trash piles was quite a workout. Owen once walked by the carport and saw Brennan squatting and bench pressing logs that he estimates weighed between 150 to 200 pounds.

Meg and Owen also set up an obstacle course with cones and ladders for Brennan to drill his footwork, and he'd have to throw a football into a net after each drill. They set up trash cans in intervals of 30, 40 and 50 yards away, and Brennan had to toss a football into each one.

The log workouts continued until a neighbor lent Brennan the key to a warehouse gym near the neighbor's house. Brennan set his own program and worked out five days a week.

His once-lanky frame, which has been discussed widely enough to have its own narrative, finally filled out. The 6-foot-4 player who arrived in Baton Rouge at 175 pounds as a freshman said he hit 221 during quarantine — a number that has hovered around the high 210s since his return to campus.

"Up until this point it's been difficult," Brennan said. "Now, I feel like I've flattened my curve out a little bit."

Meanwhile, Louisiana is attempting to flatten out its second surge in coronavirus cases. The fate of college football partly rests on public health trends, and most of the SEC region is not healthy enough yet to play safely, NCAA medical officers said last week.

COVID-19 surges have already temporarily shut down college athletic activities at North Carolina, and university officials across the country are expecting outbreaks as students start returning to campus for in-person fall classes.

LSU began self-reporting its cases Wednesday, and 25 total tests have been reported on campus since students moved in Saturday. Classes are scheduled to begin Monday.

Brennan has effectively created his own bubble. He lives by himself in an apartment. He takes online-only classes. He leaves for football practice, then returns home for dinner, studying and watching film.

"I won't have to be on campus as much, which is nice," Brennan said. "It has been nice not having to worry as much about being exposed to the outside community."

Masks required, tailgating up to universities, according to new SEC football safety guidelines

How might LSU do against Alabama, Florida and Texas A&M? See our experts' picks