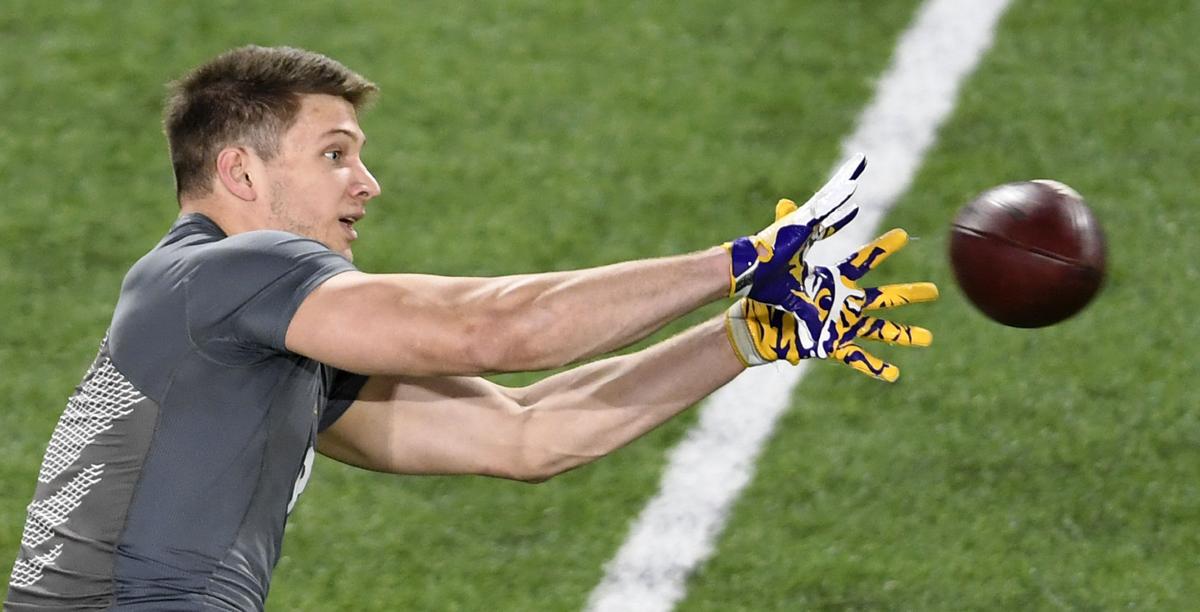 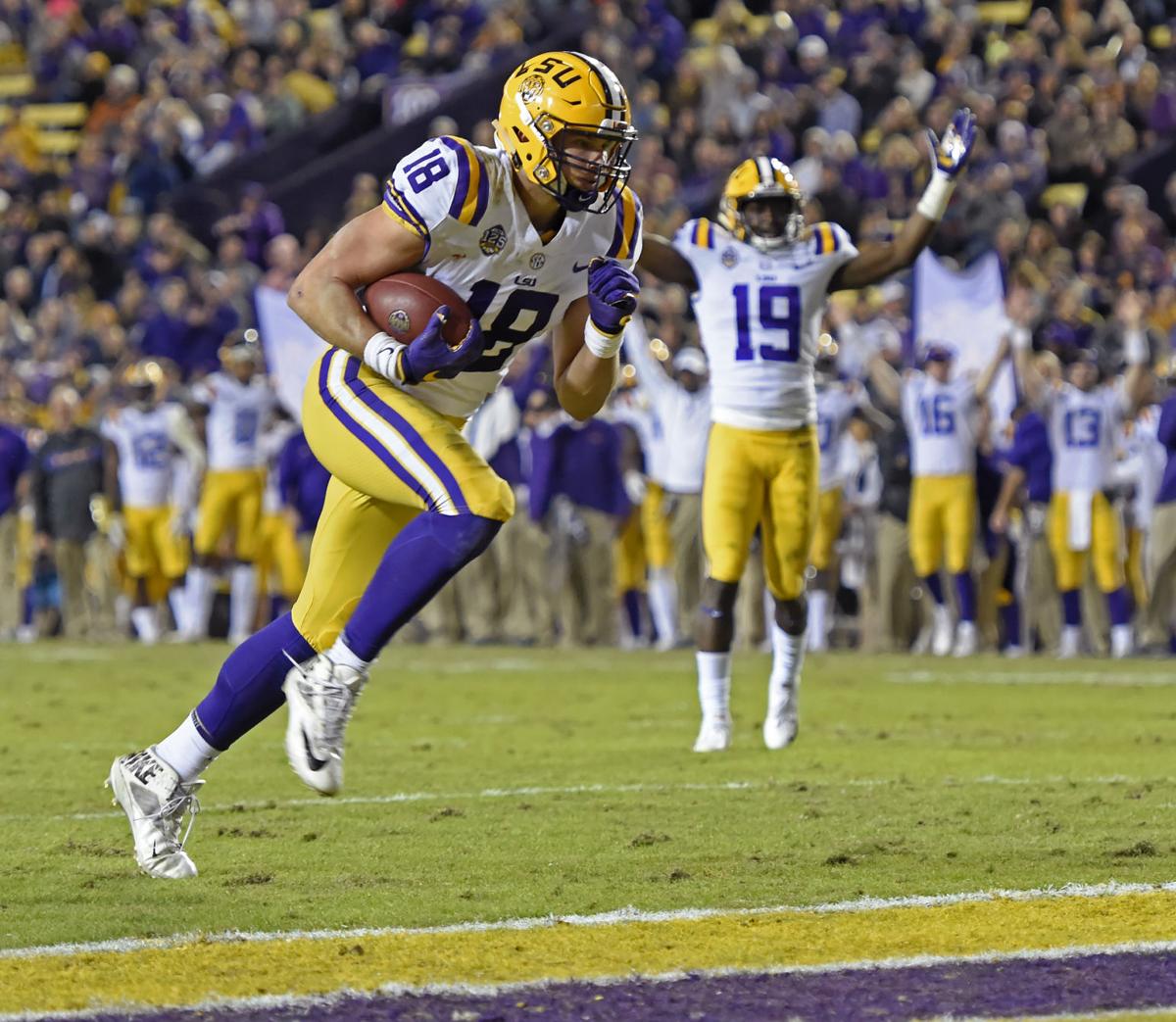 Foster Moreau started his career with the Oakland Raiders by defining the word "loquacious."

The former LSU tight end got plenty of ribbing from his college teammates when he pulled out the word during an interview at last summer's Southeastern Conference media days.

On Saturday, moments after the Raiders selected Moreau with the No. 137 overall pick in the fourth round of the NFL draft, a reporter brought the word up and asked if Moreau thought of himself as a Renaissance man.

"Let's define 'loquacious,' first off," Moreau said, provoking laughter across the conference call. "Sometimes I say too much. Obviously, you guys can attest to that, knowing me for what, I've been on this call for 6 minutes and 45 seconds. ... I hang out with a lot of people who are much smarter than me, which I hope will in turn make me intelligent. It hasn't worked yet. But we're going to keep trying."

Within the first hour of his professional career, the New Orleans native had already demonstrated the charisma that led him to wear LSU's honorary No. 18 jersey during his senior year.

Moreau's off-the-field traits supersede most of what happened on the field, where he recorded 52 catches, 629 yards and six touchdowns in his college career — a total that falls short of most of the single-season numbers recorded by the eight tight ends who were drafted before him.

But Moreau had an impressive Senior Bowl, NFL combine and pro day — enough to where the Raiders made Moreau the highest-selected LSU tight end since Harold Bishop was drafted in 1994 by the Tampa Bay Buccaneers in the third round, No. 69 overall.

Moreau had a feeling he might go to Oakland. He said he'd gone to dinner with Oakland tight ends coach Frank Smith at the Senior Bowl in Mobile, Alabama, back in January.

"I fell in love with the way he coached and how he addressed the game, and what he does for his players and how he coaches," said Moreau, who was among five players that were named "Practice Players of the Week" at the Senior Bowl. "It's funny. I kept up with him throughout the whole process... I kinda hoped this'd happen."

NASHVILLE, Tenn. — Hardly is anything as sure a thing as was Devin White walking across the …

It's an interesting time for Moreau to join the franchise.

The Raiders are in the middle of a steep rebuild, and the team is scheduled to move to Las Vegas after the 2019 season. Their head coach, Jon Gruden, left the broadcast booth last year to lead the franchise that once traded him to the Tampa Bay Buccaneers (he and the Bucs beat the Raiders in Super Bowl XXXVII the following season).

Tight end became a need for the Raiders, who took Moreau with its seventh pick in the draft, which it received after trading two spots backward with the Atlanta Falcons to receive an additional seventh-round pick.

Ed Orgeron has added a familiar face to his coaching staff, hiring Kenechi Udeze as a defens…

The Jesuit High graduate went from being a last-minute scholarship player at LSU to a fourth-round pick, becoming the first drafted tight end in the Ed Orgeron era and the first selected since Keith Zinger was drafted by the Carolina Panthers in the seventh round in 2008.

The 6-foot-4, 253-pound Moreau climbed up draft boards by running a 4.66-second time in the 40-yard dash that placed him fifth among tight ends at the NFL combine. His 36.5-inch vertical leap tied for third, 22 bench press reps tied for second, and his time of 4.11 seconds in the 20-yard shuttle was the fastest of anyone at his position.

"They didn't expect me to do that," Moreau said at LSU pro day. "That was not expected because I haven't shown that on my game tape, which is apparent. But it's fun to get out there, raise questions. Not prove people wrong, but just kind of take people aback, be a pleasant surprise."

Coaches and scouts even shared their surprise with Orgeron. Moreau had just 22 catches in the 2018 season. But Moreau said it "was no one's fault" he wasn't used more, but that injuries to other players factored into the need for his blocking prowess.

Foster Moreau has been drawing attention at the Senior Bowl this week.

"Just winning games was our prerogative here, and that's what we were able to do," Moreau said at the time. "And we did it a lot. So, I wouldn't change my time, my position, my role here for anything from anyone. Stats are stats, but at the end of the day, wins are wins, and I'll take a win over 200 yards and three touchdowns any day."

After LSU's Fiesta Bowl victory over Central Florida, Moreau prepared for the Senior Bowl at TEST Football Academy, a training facility in Martinsville, New Jersey, where he worked on the skills that helped him have an impressive combine and pro day.

“Foster is a very talented tight end out of LSU that plays with a chip on his shoulder,” said Geir Gudmundsen, the director of football operations at TEST. “Watch his tape and you would see that he does everything at a very high level. In my opinion, he has the drive and athletic ability to be a special player in the NFL.”

Moreau was the 10th-rated tight end in the draft according to Ric Serritella, analyst for NFL Draft Scout.

Serritella, who is a consultant for TEST, wrote that Moreau "played in an offense that doesn't utilize its tight end heavily, so (he) doesn't own gaudy stats," and that Moreau had a tendency "to use his chest to bring the ball in" and "needs to do a better job of bringing the ball in with his hands because that can be the difference between a pick-six and a completion at the next level."

"He is more than capable in the receiving game and shows excellent balance," Serritella said. "Extremely versatile, having lined up at H-back and fullback. His work ethic and football intelligence is the cream of the crop, plus toughness and grit, which is as good as it gets."

LSU's Foster Moreau on prized No. 18 jersey and a funny story about his mom's reaction

Still stunned after learning that he had been awarded the No. 18 jersey to wear for the LSU football team this season, Foster Moreau had one l…

Can Moreau become that all around tight end for the Raiders?

LSU's Foster Moreau has surprised leading up to the draft; 'They didn't expect me to do that'

Foster Moreau exceeded even his own expectations.