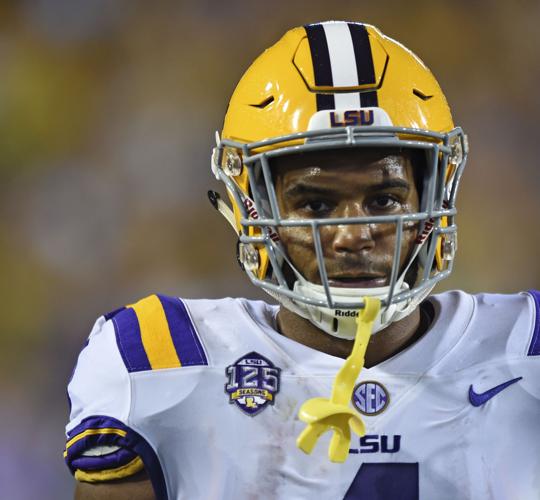 LSU running back Nick Brossette on the field against Ole Miss on Sept. 29 at Tiger Stadium. Brossette has 792 yards rushing as the Tigers head into their home finale against Rice on Saturday. 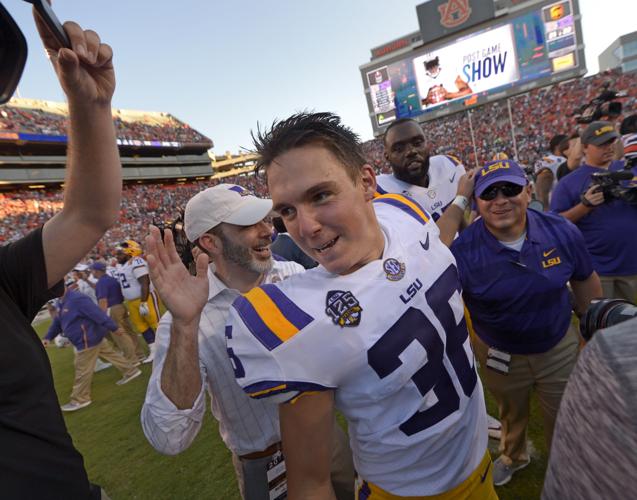 Cole Tracy celebrates kicking the game winning-field goal in LSU's 22-21 win over Auburn on Sept. 15, 2018, in Auburn, Ala. Tracy says then-trainer Jack Marucci ‘took me on as a project to keep me healthy and keep me fresh the entire season.’

LSU running back Nick Brossette on the field against Ole Miss on Sept. 29 at Tiger Stadium. Brossette has 792 yards rushing as the Tigers head into their home finale against Rice on Saturday.

Cole Tracy celebrates kicking the game winning-field goal in LSU's 22-21 win over Auburn on Sept. 15, 2018, in Auburn, Ala. Tracy says then-trainer Jack Marucci ‘took me on as a project to keep me healthy and keep me fresh the entire season.’

Cole Tracy and Nick Brossette both had different high school experiences, and they both started their collegiate careers in different places, but they will both end in Tiger Stadium on Saturday night.

Tracy and Brossette are two of 18 seniors who will be honored during LSU’s final home game of the season against Rice at 6:30 p.m. Saturday.

“It’s going to be special,” Brossette said. “I’ve been thinking about it; it’s crazy. It’s going to be my last game in Tiger Stadium. I’m excited for it. The fans and everybody, they offered a lot to me. It’s crazy how my years have been at LSU, and I just want to thank everybody.”

Tracy, a graduate transfer kicker, hails from Camarillo, California, where he played football and soccer at Newbury Park High School.

Tracy didn't get a Division I scholarship offer, despite visits with West Coast schools like Washington State, so he spent his four undergraduate years on the opposite coast at Assumption College in Worcester, Massachusetts, before transferring to LSU.

Tracy’s only wish for Saturday is that the outcome is better than his senior day at Assumption College, where a lackluster effort ruined the Greyhounds’ undefeated season.

“This week will be interesting just because even though I haven’t been here for four years or five years, it’s kind of just a reflection on my career as well as my time here,” Tracy said. “Even though I’ve only been here for a season, it’ll be a time for me to be able to reflect on the last five years.

“I love Tiger Stadium and to think that this is my last time in there. ... I mean, it was very abbreviated and short, but I’ll just try to soak it all in.”

LSU, the team and its fans have embraced Tracy during his short tenure — especially after his last-second game-winner at Auburn on Sept. 15. He even admits to being shocked by how easy the transition was for him.

Brossette, unlike Tracy, was a highly recruited four-star running back at University High, where he was a five-year starter and led the Cubs to a state title in 2014.

U-High, of course, sits on the east side of LSU’s campus — and like many children who grew up in Baton Rouge, Brossette always dreamed of playing for the Tigers.

“(My dreams) definitely came true, just being the starting running back for LSU,” Brossette said. “It’s exciting and breathtaking, and I’m just enjoying every minute of it. I’m just going out there, playing for my teammates. We’re just enjoying playing ball with each other. I’m just being myself. I’m comfortable and I’m just having a good time right now.”

Brossette has blossomed in his senior season after sitting behind big-time players like Derrius Guice and Leonard Fournette during his first three years. Coming into this season, he had the most experience of any running back on the team — 306 yards rushing in three seasons.

Others might have transferred. Brossette said he had to put on his “big boy pants,” to let his hard work pay off and wait his turn.

“I just had to be patient and learn from it,” Brossette said. “Learn from (Fournette and Guice). I’m kind of glad I went through it to see what I need to work on and just bond with those guys. In high school, everything is given to you, so that taught me patience and I’m thankful to learn from those guys. Everything is paying off now.”

With 792 yards rushing this season, Brossette has a real chance to reach the 1,000-yard plateau, with regular-season games against Rice and Texas A&M, not to mention a bowl.

Brossette said it didn’t even hit him until Sunday, after the Tigers' 24-17 win at Arkansas, that this really will be his final game in Tiger Stadium.

He hopes his entire family, including his mom, brother, sister and nieces, will be on the field with him, but he said he wants to share the whole day with the fans and his teammates as well.

“I know our fans are going to be out there to support them,” LSU coach Ed Orgeron said of the senior class. “These guys have poured their heart and their soul out for the Tigers. They have done so much for our school, so much for myself and they're great young men.”

Brossette added: “I just want to enjoy the moment with my teammates and my family, because I’m never going to get this moment again. I want to finish off on a good note.

If every coach in college football got into an all-out brawl, how good are LSU coach Ed Orgeron's chances to come out on top?