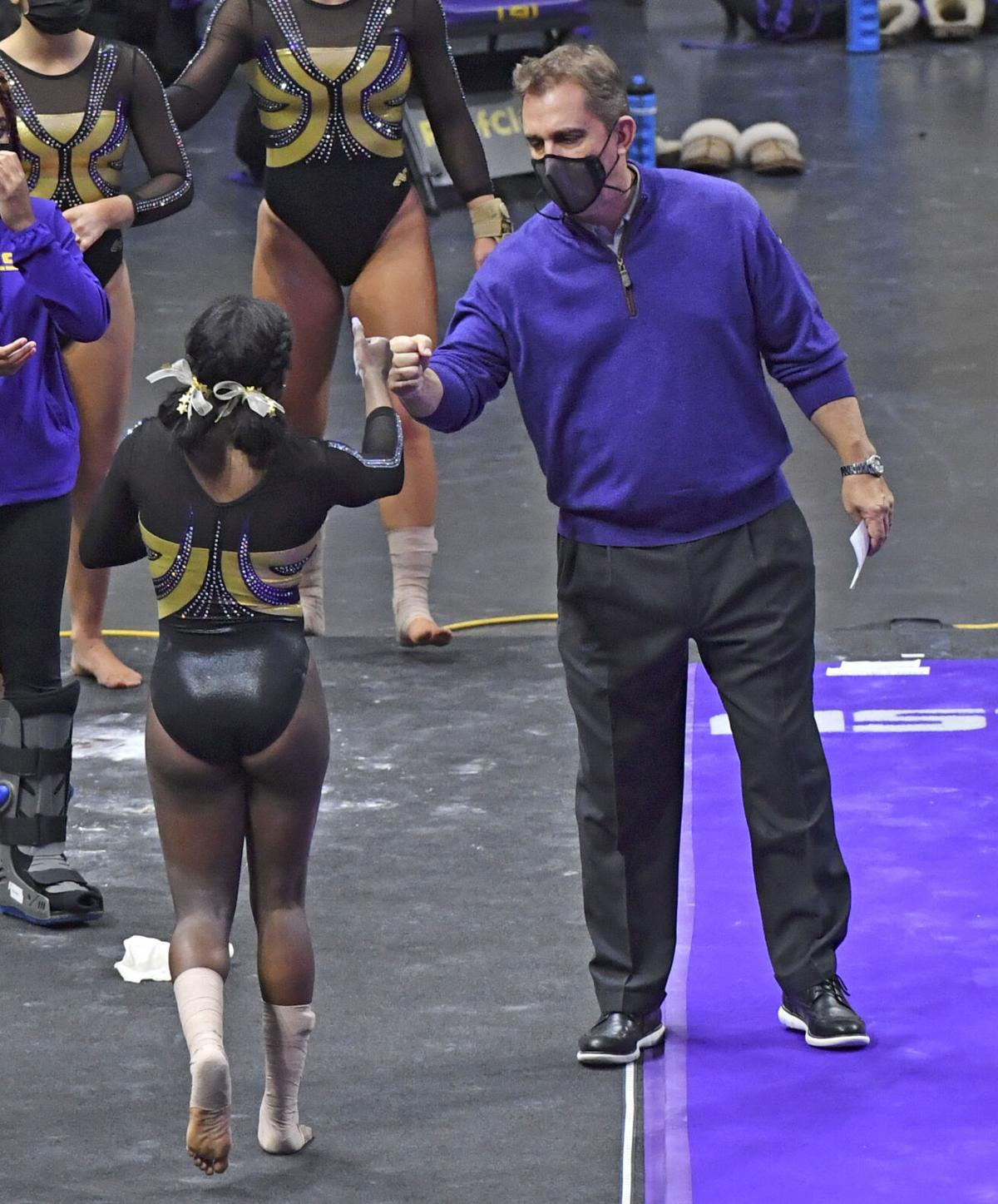 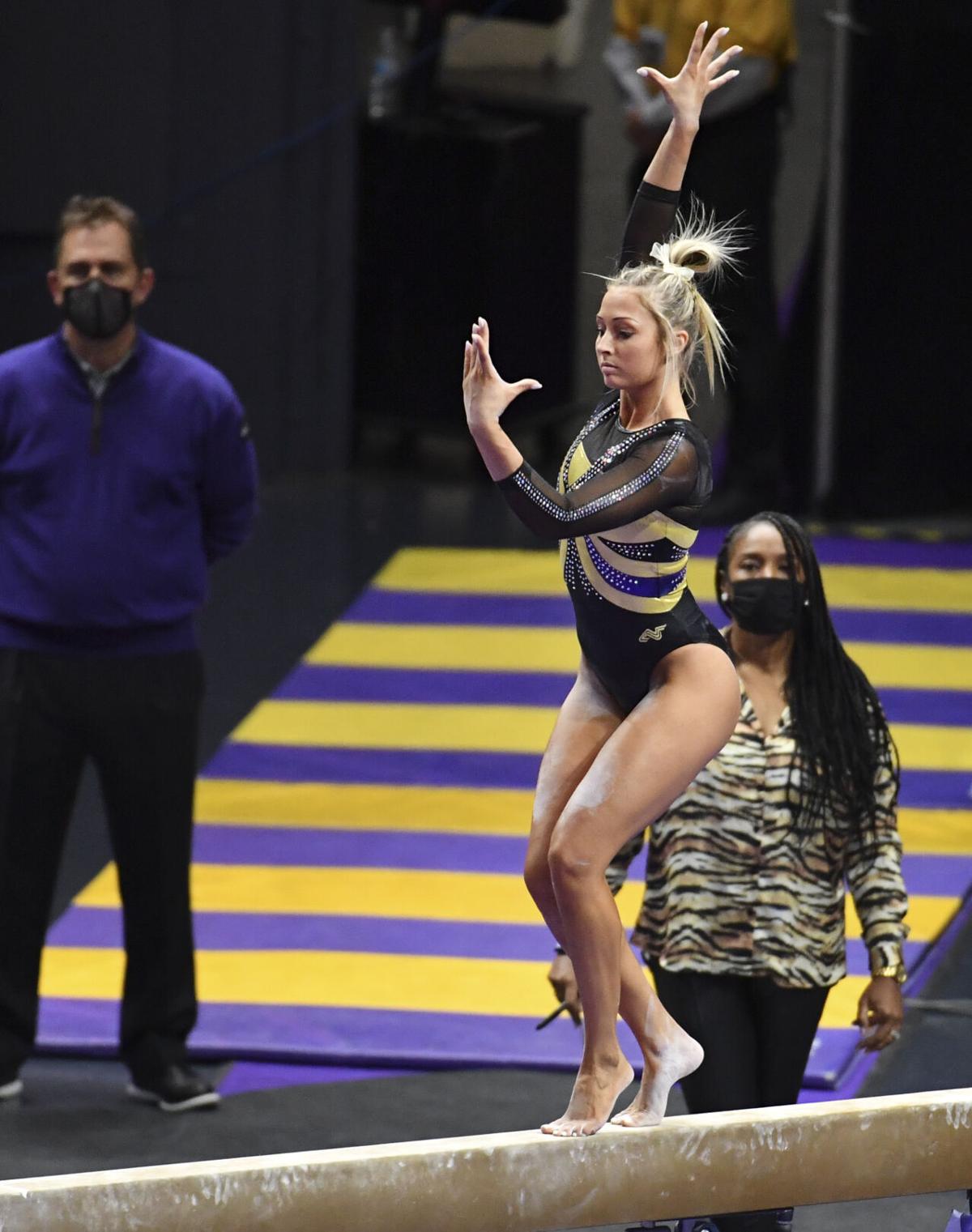 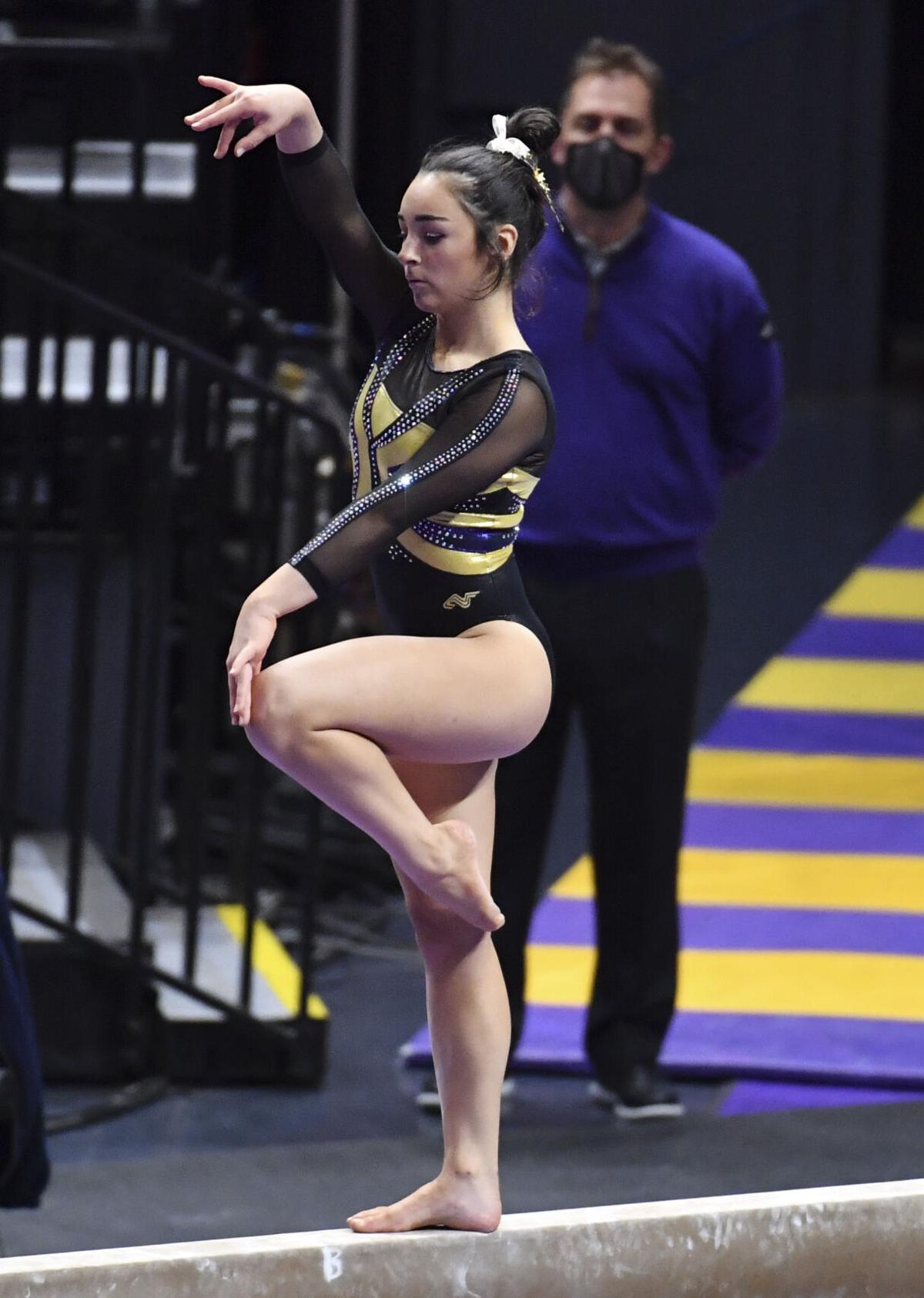 LSU freshman Elena Arenas competes on beam with coach Jay Clark in the background in the Tigers' season opener against Arkansas, Friday, January 8, 2021, at the Pete Maravich Assembly Center.

LSU freshman Elena Arenas competes on beam with coach Jay Clark in the background in the Tigers' season opener against Arkansas, Friday, January 8, 2021, at the Pete Maravich Assembly Center.

The No. 5-ranked LSU gymnastics team hosts No. 11 Georgia at 7:30 p.m. Friday night in the Pete Maravich Assembly Center.

But there is so much more to it than just another gymnastics meet on the schedule when the Tigers and Gym Dogs get together.

There is history between the people in these two programs. There is also pain, though like bruises, time has helped to fade them a bit.

LSU coach Jay Clark went to Georgia, was an assistant at Georgia, was head coach at Georgia, succeeding the legendary Suzanne Yoculan. His wife, Julie, left home in Mandeville to be a gymnast at Georgia. The Clark family owned their dream house in Watkinsville, just outside Athens, where if he wanted Clark could walk to nearby Oconee County High School, alma mater of former LSU quarterback Zach Mettenberger and current quarterback Max Johnson, to catch a game.

But Clark couldn’t sustain the unreal success Georgia had under Yoculan, winning 10 NCAA titles, most of which he helped coach as well. He stepped down after the 2012 season and was quickly snapped up by then LSU coach D-D Breaux to be her top assistant and recruiter.

Despite Haleigh Bryant’s youth, Kiya Johnson’s surprising struggles on beam and LSU’s gymnastics coaches wanting to be careful with the health…

Clark said all he knew about LSU beyond the hotel Georgia stayed at in Baton Rouge and the PMAC was a little about LSU football. Back in the day, his dad, while a devout Georgia fan, also pulled for LSU, especially when former offensive coordinator Steve Ensminger was quarterbacking the Tigers.

“I’m at LSU,” he said. “That’s where our family is now. We will always have affection for our alma mater, but that’s independent of our allegiance to LSU.

“We’re dyed-in-the-wool Tigers at this point.”

Clark was succeeded at Georgia by Danna Durante, who met the same fate and was let go after the 2017 season. As a result her daughter, Sami, transferred to LSU and is now a senior for the Tigers.

Asked about her Georgia connection, Durante admitted she was looking forward to not having to be asked about it again since this is her last regular-season meet against UGA. Despite having to switch programs heading into college, she said she’s happy with the way things turned out.

“It’s been a positive experience,” said Durante, whose parents will travel from Athens where they still live for this meet. “I wouldn’t trade it for anything. I’m so thankful I got to come here and do gymnastics. I’d do it all over again.”

At the other end of the eligibility spectrum is LSU freshman Elena Arenas. Her mom, Kim Arnold Arenas, is Georgia gymnastics royalty: a two-time NCAA all-around champion and member of its 1998 national title team, who was recruited to Georgia by Clark. Elena’s father, Pete Arenas, played baseball for the Bulldogs.

The Arenas family’s relationship with Clark is one of the things that drew Elena to LSU. Meanwhile another Georgia gymnastics great, Courtney Kupets Carter, coaches the Gym Dogs, trying to return them to their glory and the program’s first NCAA title since her senior season in 2009. Kupets Carter had arguably the greatest collegiate gymnastics career ever, winning nine individual NCAA titles and becoming the first gymnast to win all four events (bars, floor, beam and vault) plus the all-around title.

Kupets Carter was recruited to Georgia by Clark as well. The two, he said, have remained good friends.

“She’s a wonderful person,” Clark said. “She’s doing a good job there. There are obstacles to that program that exist because of the grand history and footprint of it that can be tedious to deal with. But she’s done a good job navigating those waters.

“I think the world of her.”

At LSU, the program’s first NCAA championship remains the goal. Before last year’s NCAA championships were canceled by the coronavirus pandemic, the Tigers finished second in three of the previous four finals, all to Oklahoma.

This year, the Tigers have the look of a contender again. Sophomore Kiya Johnson has the nation’s only perfect 10 so far this season, on floor in LSU’s last home meet Jan. 8 against Arkansas, and freshman Haleigh Bryant recorded the nation’s third-highest all-around score in a win last week against Arkansas on the road.

“It’s difficult to come out of the gate at your very, very best and sustain that the entire season,” he said. “I like where we are.”

NOTES: The meet will not be televised on one any of the ESPN networks but will be streamed live on SECNetwork+ via WatchESPN.com and the Watch ESPN app. … Fans attending in person are encouraged to arrive early and be in their seats for introductions beginning at 7:10 p.m. The program is planning to honor Breaux, who retired in August after 43 years as coach, at that time.