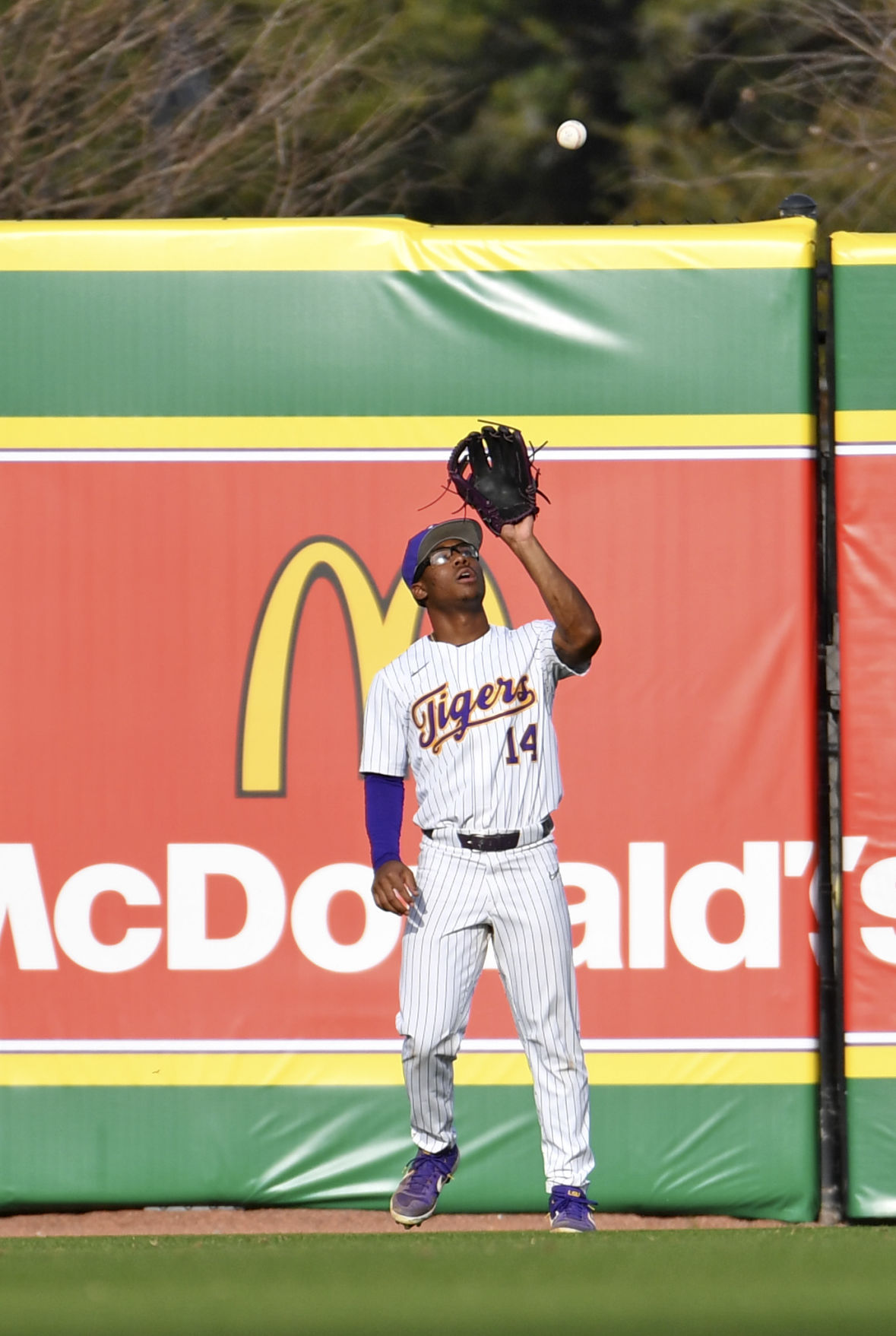 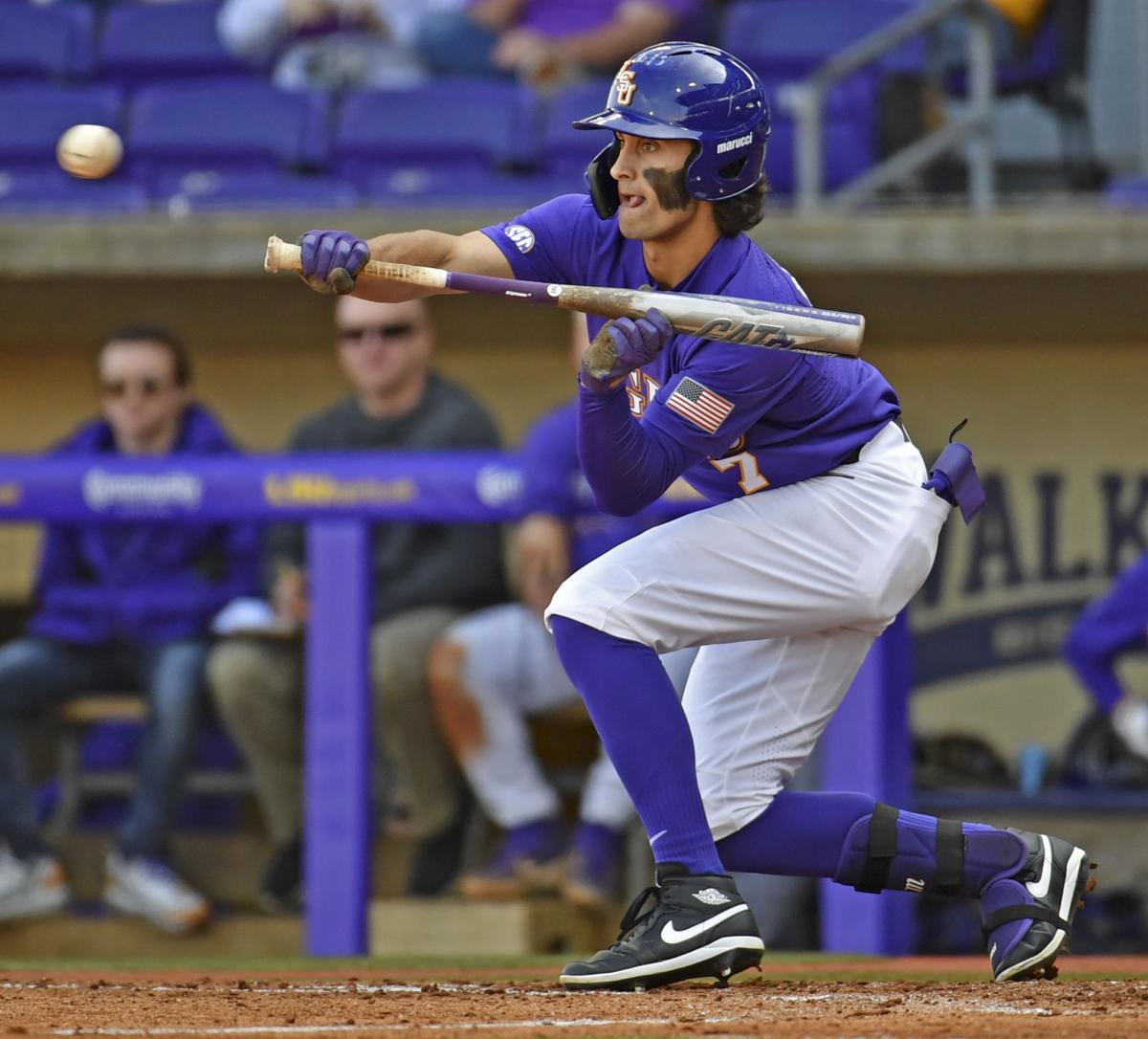 Freshman Maurice Hampton Jr. stood straight, holding his bat near his right ear on Wednesday night. He had reached a full count in the second inning against Louisiana Tech.

With a runner in scoring position, Hampton looked for a fastball on the opposite side of the plate. Instead, the pitch spun inside. Hampton pulled his hands close to his body as he swung. The ball dropped near the left field line.

As sophomore center fielder Giovanni DiGiacomo scored, Hampton slid into second base. He wiggled his hips once he stood, celebrating the first extra-base hit of his career.

“Shakira at the end,” Hampton said.

Not yet two months after his freshman football season ended, Hampton played the best game of his LSU baseball career as his hitting streak reached five games.

The freshman left fielder, along with DiGiacomo and freshman shortstop Collier Cranford, produced runs at the bottom of LSU’s lineup, and the No. 19 Tigers beat Louisiana Tech, 7-1, for their third straight win.

LSU (6-3) was patient at the plate while Louisiana Tech (5-3) struggled to throw strikes. The Tigers put the ball in play and they worked deep counts, forcing the Bulldogs into mistakes. Louisiana Tech committed five errors. LSU scored six runs by the third inning.

These nights have terrorized LSU in the past, a midweek game played in frigid temperatures with winds gusting through Alex Box Stadium. The Tigers have struggled in similar conditions. Their hitting sometimes disappeared in front of sparse crowds bundled in the cold.

Entering the game, coach Paul Mainieri tried to create balance within a lineup previously dependent on home runs. He wanted the Tigers to score in a variety of ways. With more speed and contact hitters, LSU executed hit-and-runs. It stole five bases. The Tigers scored without hitting the ball out of the stadium.

“I felt more comfortable with our offense tonight,” Mainieri said. “It wasn't station-to-station and hope somebody hits a home run. We were able to put a little pressure on the other team.”

The bottom of the lineup had struggled this season, but it stretched the lead. With LSU ahead 1-0 at the start of the second inning, DiGiacomo walked. He stole second base and advanced to third on a wild pitch before Hampton’s double.

Cranford, batting ninth, put down a sacrifice bunt. He reached on an error by the pitcher, and Hampton scored. The Tigers led 4-0 after sophomore first baseman Cade Beloso drove in his second run of the game.

With two outs in the third inning, DiGiacomo singled. He tried to steal second, but Louisiana Tech caught him in a rundown. DiGiacomo somehow avoided the tags. He reached scoring position.

Soon knotted in another full count, Hampton singled into left field, the first multi-hit game of his career. DiGiacomo scored, then Cranford singled for his first career hit.

Mathis walked to the plate with two runners on base. He singled, and the Tigers stretched their lead to 6-0 when Hampton scored.

Later, Hampton stole second after getting hit by a pitch. Mathis tripled down the right field line, and Hampton scored LSU’s final run. Mathis, the leadoff hitter, batted four times with a runner in scoring position.

“Them getting on base and me able to drive them in, it's jumpstarting the lineup,” Mathis said. “I feel like it was well-rounded today.”

The Tigers had not received so much production from the final three spots in the lineup this season. Mainieri had altered those positions more than any section of the batting order, looking for consistent production.

DiGiacomo, Hampton and Cranford didn’t begin the season as starters, but they had earned playing time when Mainieri settled on one lineup for the games this week, trying to end experimentation that has defined the beginning of the schedule.

Filling the last three spots in the order, DiGiacomo, Hampton and Cranford combined to go 4 for 7 with five runs. They reached base seven of their 12 plate appearances. None of them struck out.

With the majority of the lineup productive against Louisiana Tech, LSU found the balance Mainieri wanted this week. It didn't allow a run until the sixth inning. And before the Tigers play three Big 12 teams this weekend in Houston, Hampton showed how much improvement he has made in six weeks on the team.

“He looks like he's getting more comfortable,” Mathis said. “You jump right in after winning the national championship and it's going to take a second.”

Playing left field for the first time this season, Hampton ran down multiple fly balls, displaying wide defensive range. He entered the game batting .222, but he reached base all four plate appearances. He finished the night with a .300 batting average.

After spending the fall as a safety on the football team, Hampton needed to adjust to better pitchers. He has since started five of the last six games, his confidence increasing as the game slows down.

Mainieri wants to see how Hampton performs against high-level pitching this weekend, but he believes the two-sport athlete will adjust because of his athleticism. Hampton feels prepared.

Said Hampton: “I think everything is going the way I want it to.”

Trying to end experimentation, LSU baseball settles on lineup — at least for now

After eight different combinations through eight games, LSU baseball has settled on one lineup, establishing consistency for the first time this season.