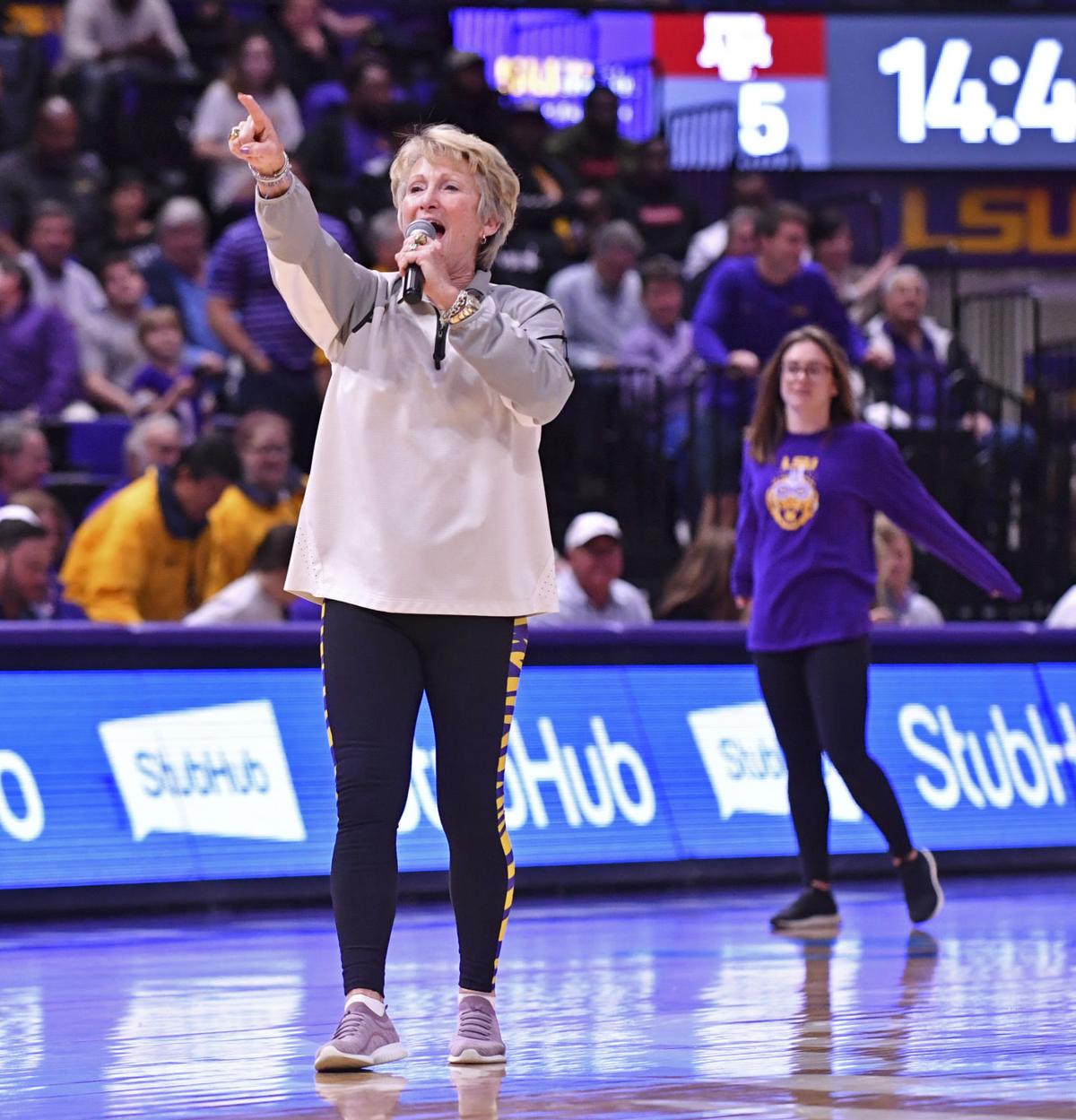 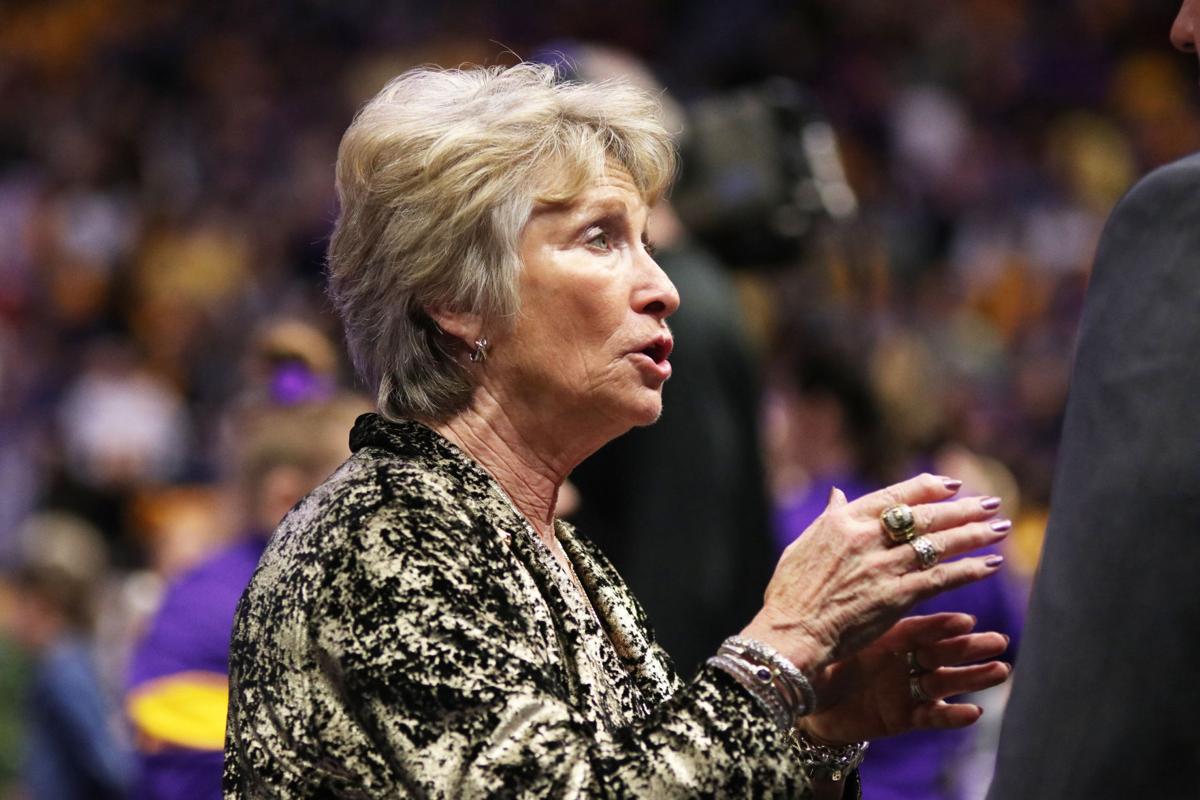 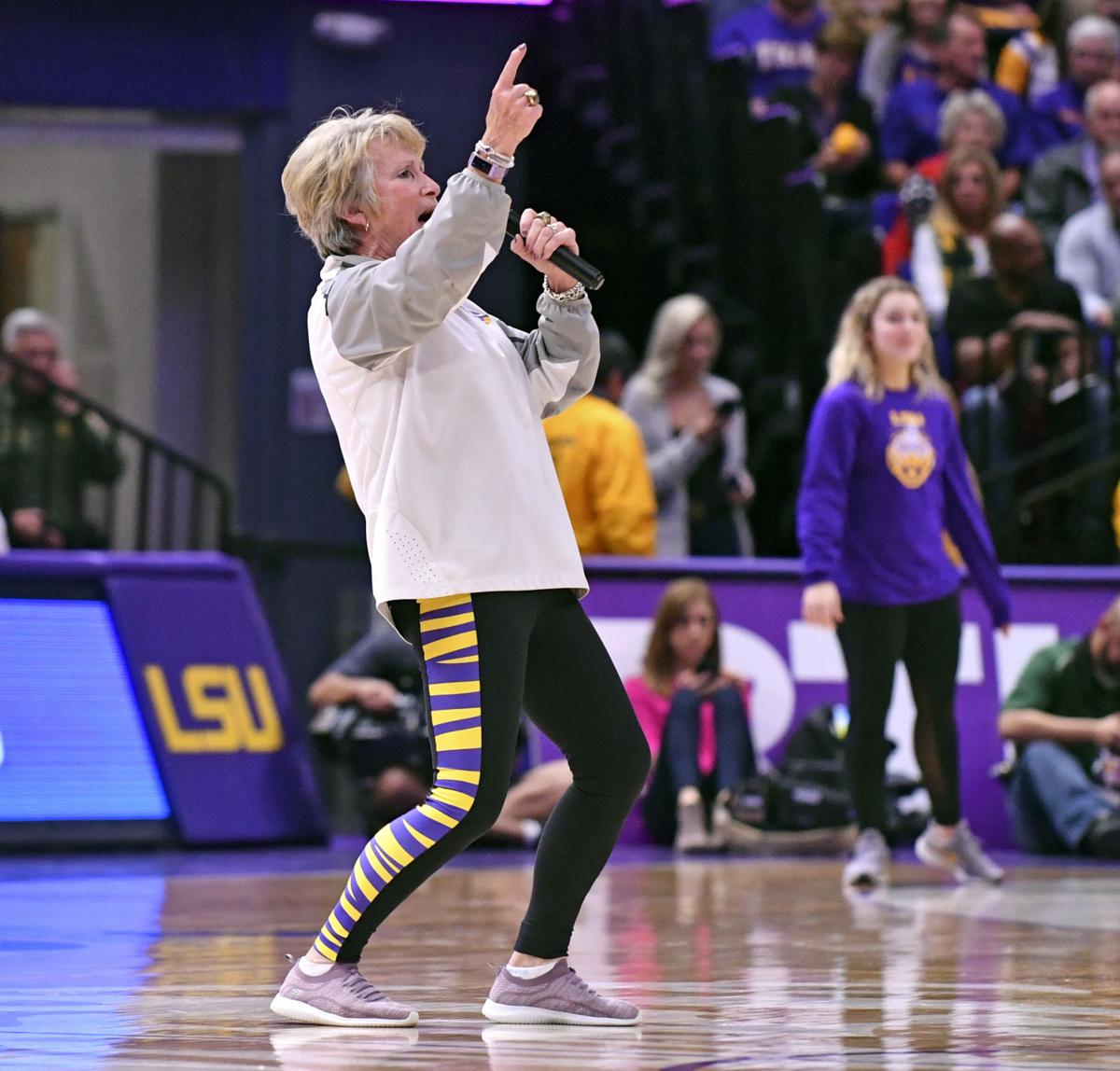 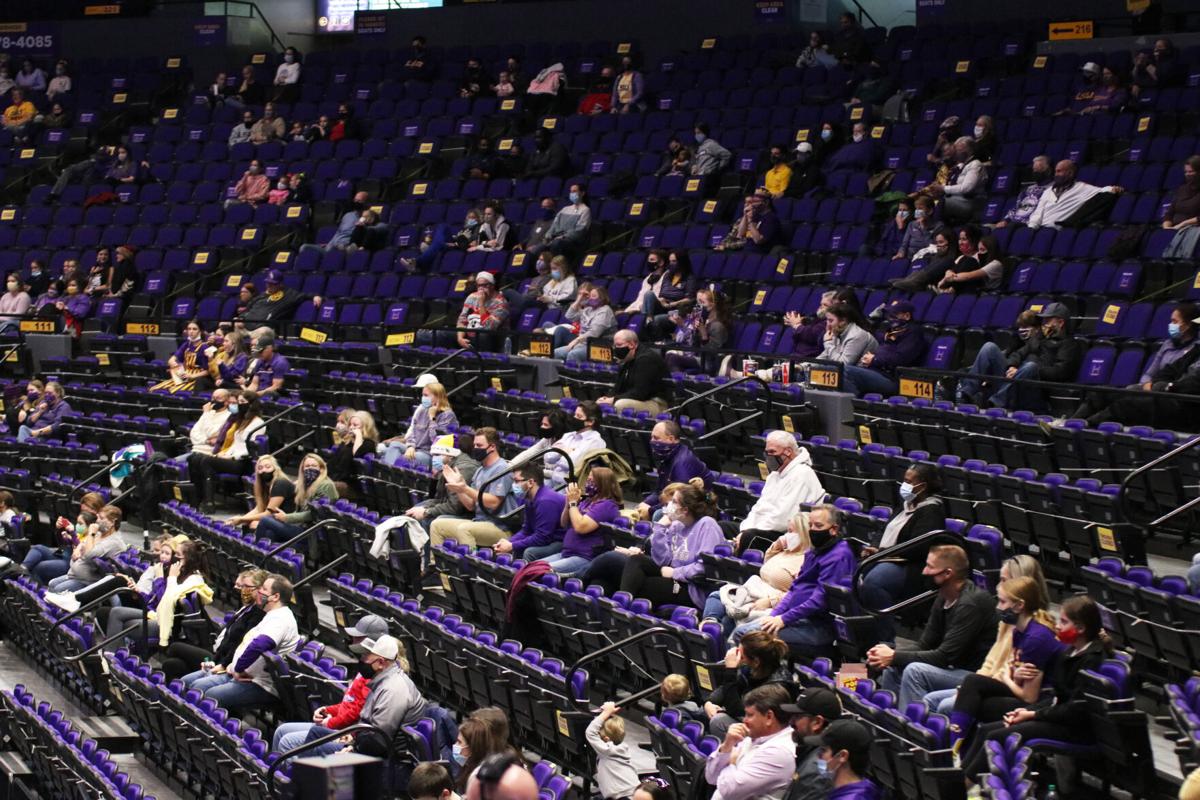 Socially distant crowd at the annual Gym 101 held at the PMAC on Thursday.

Socially distant crowd at the annual Gym 101 held at the PMAC on Thursday.

Four months into her retirement, D-D Breaux stepped from behind the scorer’s table inside the Pete Maravich Assembly Center and grabbed a microphone. She removed her mask and began to talk as gymnasts ran behind her, serving as the emcee of an annual event designed to reinvigorate interest in LSU gymnastics.

In the stands across from Breaux, about 500 boosters sat in groups socially distanced from one another. Most of them wore masks. Zip ties constrained rows of chairs. Cardboard cutouts filled a section of premium seats on the other side of the arena.

Gymnastics 101 attracted more than 3,000 people in recent years, but the coronavirus pandemic restricted its size this December. Wearing a black and white tiger print sweater with a Christmas tree stitched on the front, Breaux promoted the athletic department and her beloved program, hoping LSU can regain its massive crowds when the pandemic ends.

“We want to hold onto our fans,” Breaux told the boosters. “We want our fans to keep the energy, keep the excitement, and tonight’s the beginning of that effort. If you talk about something enough, it’ll happen.”

Breaux’s voice rose as she said LSU gymnastics will eventually win a national championship, and the crowd cheered. For the next hour, she stood on a platform between the scorer’s table and the stands, handing out prizes like her favorite Louisiana cookbook and interviewing the gymnasts as they prepared for LSU’s season-opening meet Jan. 8 against Arkansas.

For the first time since 1978, Breaux won’t be the head coach when LSU competes. She retired in early August, ending the longest tenure in Southeastern Conference history, and co-head coach Jay Clark took over the position. Breaux transitioned into the role of an ambassador.

LSU gymnastics: Tigers aim to generate their own energy before reduced crowds in 2021

LSU gymnasts have become accustomed in recent years to feeding off the energy of 10,000 to 13,000 fans filling the Pete Maravich Assembly Cent…

LSU can fill up to 25% of the PMAC when gymnastics season begins, but LSU’s image suffered in 2020 as the school reckoned with the social justice protests, accusations it mishandled sexual assault claims and the coronavirus pandemic. Coming off a national championship, the football team never met its maximum capacity inside Tiger Stadium last fall.

“There's so many things I feel like we need to be doing right now to improve our brand, bring our brand back and create an atmosphere where our fans want to come back and make our events — even though they're diminished in size — make them fun, make them exciting, make them what an event should be,” Breaux said, “But I don't see that happening.”

After she retired, Breaux spent a few weeks moving her office from the fourth floor of the athletic administration building to a room on the ground level of Tiger Stadium, remaining near the hub of LSU athletics. She had shelves built along the walls and lined them with mementos from her career.

Inside her office in mid-December, a few days before Gymnastics 101, Breaux looked at her proclamation from Gov. Edwin Edwards, her SEC Coach of the Year awards and a picture with former LSU gymnast Ashleigh Gnat, who returned as an assistant coach after Breaux retired.

“I always said when I am done, I'm going to pick up the pencil I walked in with and leave,” Breaux said. “But as you can see, I have more than a pencil. I've got so much stuff.”

Breaux sat inside a purple and gold chair shaped like an LSU football helmet and rested her feet on the facemask. She had recently recovered from coronavirus, which lingered for about two weeks. She took deep breaths because she feared a ventilator and wondered if she would stop breathing. She developed a fever and body aches. She lost motivation to read or watch television.

Though Breaux felt better a few weeks later, the illness changed her sleeping pattern. She often woke up at 4 a.m and spent the early mornings washing crystal and polishing silver. She also lost her appetite for chocolate, beer and wine.

When she decided to retire, Breaux asked athletic director Scott Woodward for a membership at the University Club, a local private golf facility. She figured as an ambassador, people would ask her to play in golf tournaments. Woodward approved.

Breaux began taking lessons, got a bag from LSU’s golf coaches and bought new clubs. She goes to the driving range two or three times a week to practice. As she swings, Breaux tells herself “glide” and “kip,” relating the new hobby to common skills in the sport she knows best.

"My primary goal is to hit it straight," Breaux said. "Consistency wins."

Retirement suddenly created hours of uncommitted time. Breaux didn't have coaching staff meetings or practices on her schedule. Instead, she finished renovations on her house, repainted a wall around her garden and spent more time with her family. She wants to go on an Alaskan fishing trip.

But Breaux has never remained still. At first, LSU gymnastics didn’t have a facility or locker room. The team trained in the corner of the fieldhouse. Gymnasts moved their equipment between practices.

Breaux marketed and promoted LSU gymnastics as well as she coached, using her enthusiasm to ensure its survival. She distributed free tickets outside Winn-Dixie and made shirts for gymnasts that advertised their meets. When Breaux added a pyrotechnics show to LSU’s entrances, former gymnast Jeanie Staples recalled her saying, “I'm just doing it. We'll see if I get away with it or not.”

By the final years of her tenure, LSU gymnastics practiced in a 38,000-square foot facility, boasted 7,000 season-ticket holders and regularly sold-out the PMAC.

“She does not compromise,” said Susan Jackson, an LSU gymnast from 2007-2010. “She does not hear the word 'no' very well, and she never lets anything stand in the way of her mission.”

Breaux wants to use the same skills that built her program to renew LSU's brand and ensure fans return after the pandemic. She wanted to host wine-and-cheese gatherings for coaches, make speeches and get involved with the Tiger Athletic Foundation.

The coronavirus pandemic and persistent negativity last year zapped those hopes, forcing her to wait. She feels frustrated and intimidated knowing she can't do more.

"What's going to bring our fans back is energy and enthusiasm and positive word of mouth," Breaux said. "It's the enthusiasm the coaches have about their programs being able to be out in public talking, and we can't do that right now."

As LSU gymnastics begins its season without Breaux as the head coach for the first time in more than four decades, she remains an integral part of the program, but also a bystander trying to separate herself from coaching.

While LSU's gymnasts warmed up for the vault at their exhibition, Breaux explained techniques and scoring to the crowd. She emphasized the importance of sticking the landing.

"A small step is a small deduction," Breaux said. "A large step or a hop is a large deduction."

She paused and looked for the first name in a prize raffle.

"But I'm going to reach into my grab bag tonight," Breaux said. "These are a few of my favorite things."

Once the pandemic ends, Clark hopes Breaux will help rebuild the crowds. He thinks LSU’s season-ticket holders recognize the temporary nature of the health crisis, but he knows the program must recover from the financial damage of reduced capacity. He thinks Breaux can help regain what LSU lost.

“When she calls you tend to pay attention because she speaks with such passion and conviction about what it is she’s talking to you about,” Clark said. “I think she’s going to be tremendously instrumental in helping us recover from what the pandemic has done.”

At Gymnastics 101, Breaux paced when the gymnasts began warm ups for their floor routines. She encouraged the crowd to purchase cutouts and donate to the Victory Fund, a tax-deductible fund LSU created in August to help sustain its athletic department. Breaux told the crowd she had three cutouts in Tiger Stadium and plans to buy more inside the PMAC.

“If she calls you on the phone, you better answer,” LSU public address announcer Mike Smith said after the crowd applauded. “I can just promise you that.”

“If I call you on the phone, I’m calling to thank you for giving to the Victory Fund,” Breaux said. “I’m a thank you call.”

'Light years ahead': LSU gymnastics in better shape than 2019 heading into exhibition meet