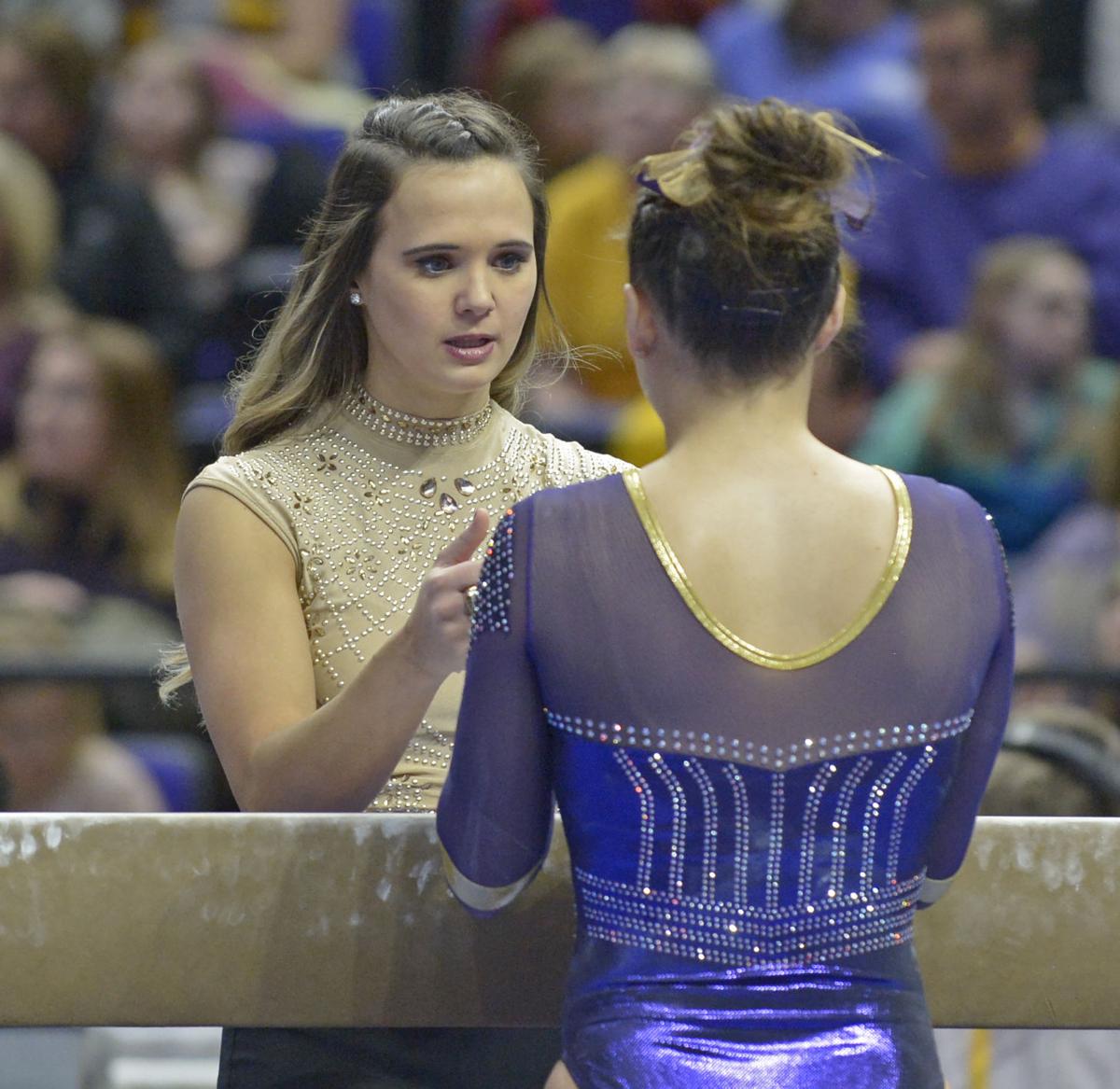 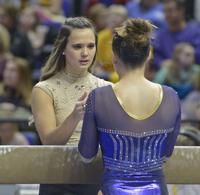 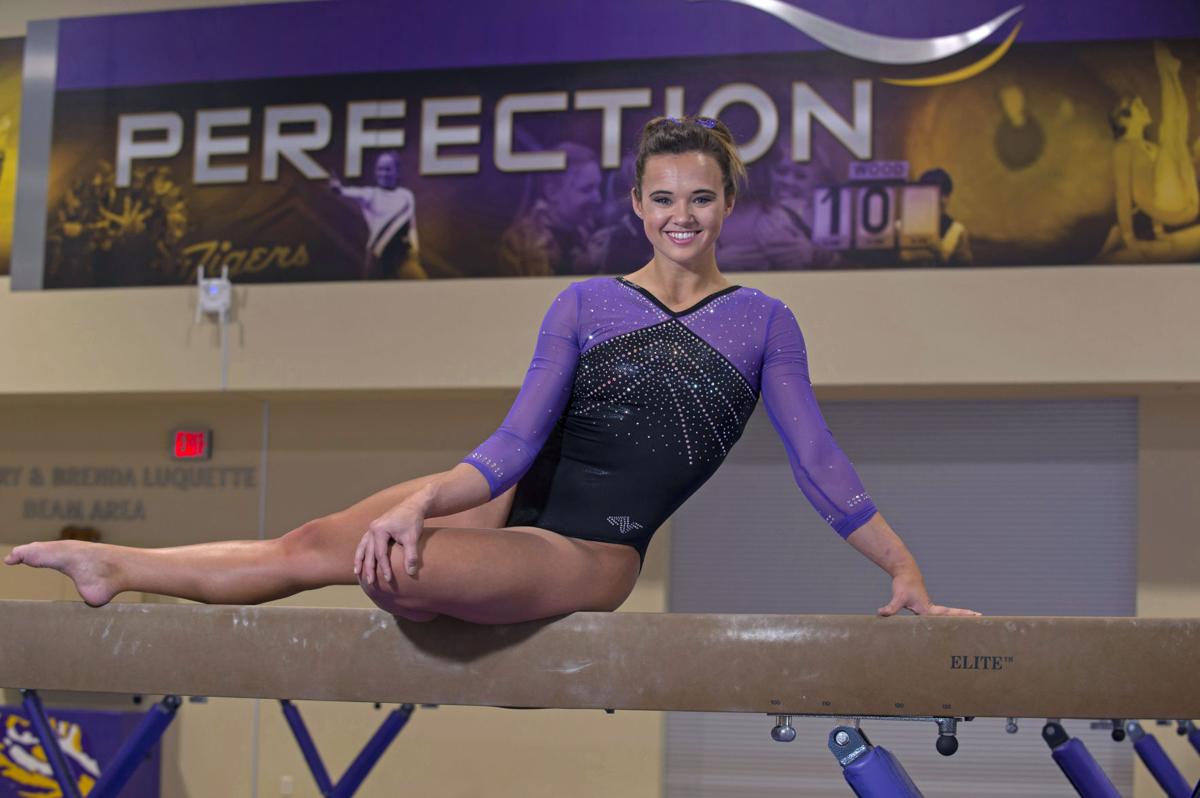 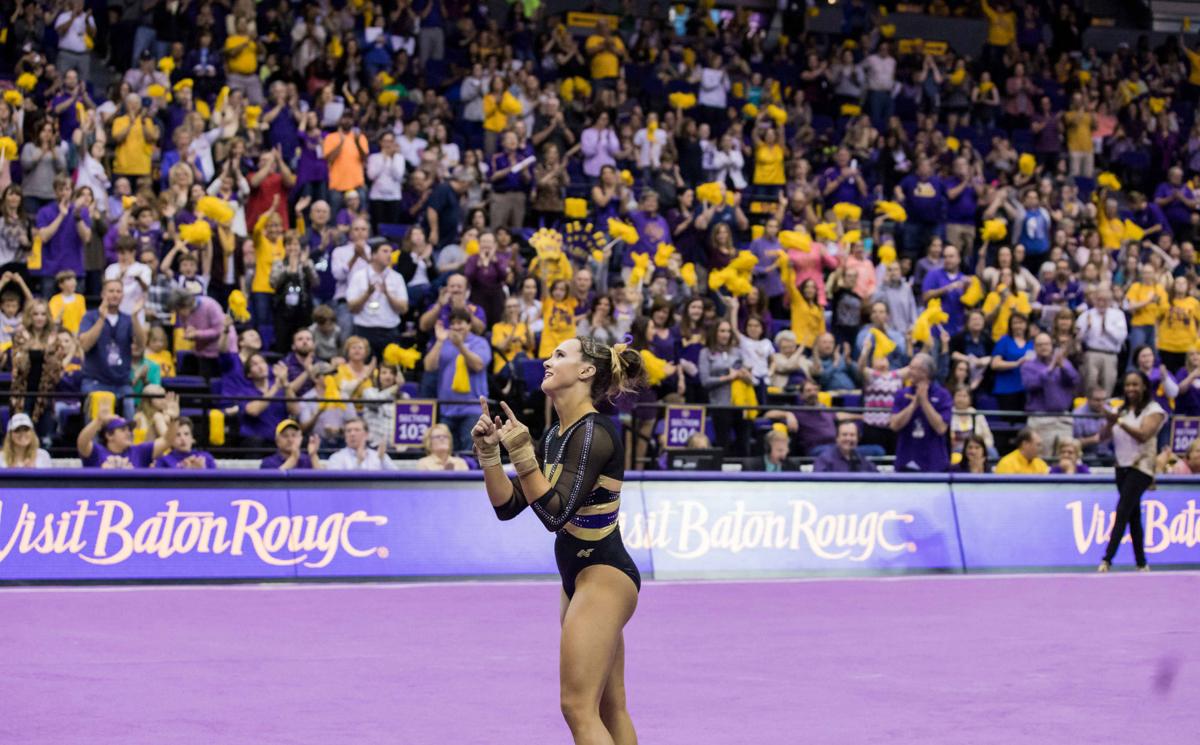 LSU's Ashleigh Gnat thanks the fans after her floor exercise against New Hampshire on March 10, 2017 at the Pete Maravich Assembly Center. In the final routine at home of her career, Gnat scored a 9.95.

LSU's Ashleigh Gnat thanks the fans after her floor exercise against New Hampshire on March 10, 2017 at the Pete Maravich Assembly Center. In the final routine at home of her career, Gnat scored a 9.95.

After 13 months away from LSU, Bugs is back.

Ashleigh Gnat, an NCAA champion, 17-time All-American and one of the most beloved gymnasts in program history, is returning to LSU as a full-time assistant coach, the school announced Thursday.

Gnat, known to the LSU gymnastics family and fans as “Bugs,” finished her competitive career in 2017 then spent two seasons as a student assistant and team manager before serving as an assistant coach this past season at Penn State. She returns to LSU to fill a vacancy on coach Jay Clark’s staff left open by the retirement of legendary coach D-D Breaux after a Southeastern Conference-record 43 seasons.

“I’m overwhelmed, but incredibly excited,” Gnat said. “I’m so blessed to be able to go back and coach at my alma mater. This is not an opportunity everyone gets in their coaching career. I am not going to take it for granted.”

Clark said there was nationwide interest in the staff vacancy once Breaux’s retirement became public.

D-D Breaux, who nurtured LSU’s gymnastics program from an unsteady beginning to a perennial championship contender that performed in front of …

“We had great résumés,” said Clark, who served as co-head coach with Breaux this past season. “Lots of people were interested in this job and had people calling on their behalf.

“But to me, it was one person all along. As many great candidates as were out there, it only made sense to get Bugs back here."

Clark said hiring Gnat was the best thing to do on several levels.

“One thing I’ve learned being here for eight years is this place is different,” Clark said. “A lot of places talk about family and try to project that, but very few places embody that. LSU, as an athletic department, has exhibited that to me in every way possible, with the camaraderie of all the coaches.

“It made sense to bring back someone who is a home-grown talent, the face of our program during the explosion of awareness in it, someone who was committed to being a coach since she arrived on campus.”

Gnat moved to State College, Pennsylvania, in July 2019, where she said she learned coaching skills she will bring back with her to LSU.

“I’m super grateful to my boss (Penn State coach) Sarah Brown and the other assistants,” Gnat said. “They guided me along the way for sure. They’re a very detail-oriented staff and I will definitely carry that back with me.”

As an LSU gymnast Gnat recorded nine perfect 10s, tied for the most in program history. The NCAA individual floor exercise champion in 2017 and a four-time SEC champion on floor, vault and beam, Gnat also won the 2017 AAI Award, given annually to the nation’s top senior gymnast.

A winner of the Corbett Award that year, given to Louisiana’s top male and female athletes, Gnat captured 62 career individual titles. That included a single-season, school-record 12 floor exercise titles as a senior.

“It’s important when we have someone qualified and has a passion for this place that we have them here,” Clark said of Gnat. ”I believe in her ability and her pedigree, her leadership she showed on our team and her temperament as a coach. It stabilizes us in a time that is a little weird with COVID and D-D’s retirement. I couldn’t be more excited.”

Gnat, 25, was born into a gymnastics family.

Her father, Ray, was an All-American on the long-defunct LSU men’s gymnastics team and her mother, Joan Moore Gnat, competed for the U.S. team at the 1972 Munich Olympics. They own a gymnastics training facility in Ashleigh’s hometown of Lake Mary, Florida. Ashleigh’s older sister, Jeana Rice-Helms, was a national champion and All-American gymnast at Alabama from 2001-04.