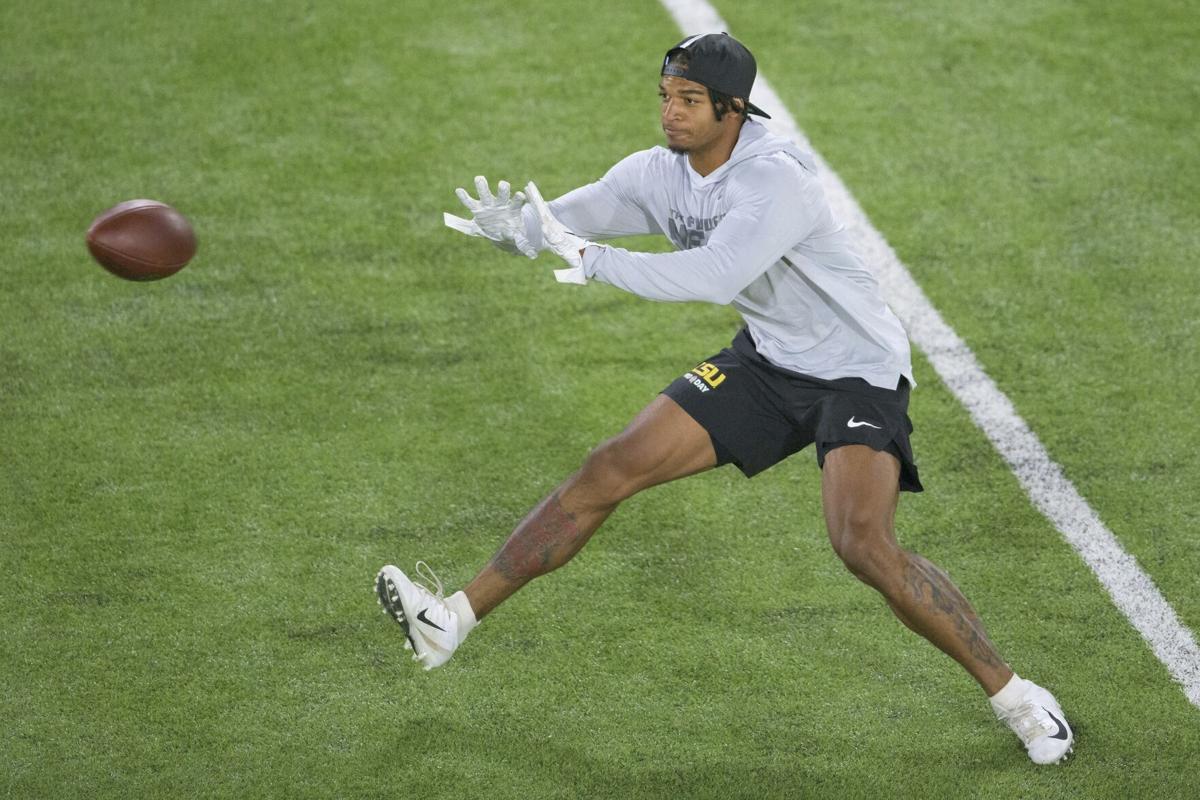 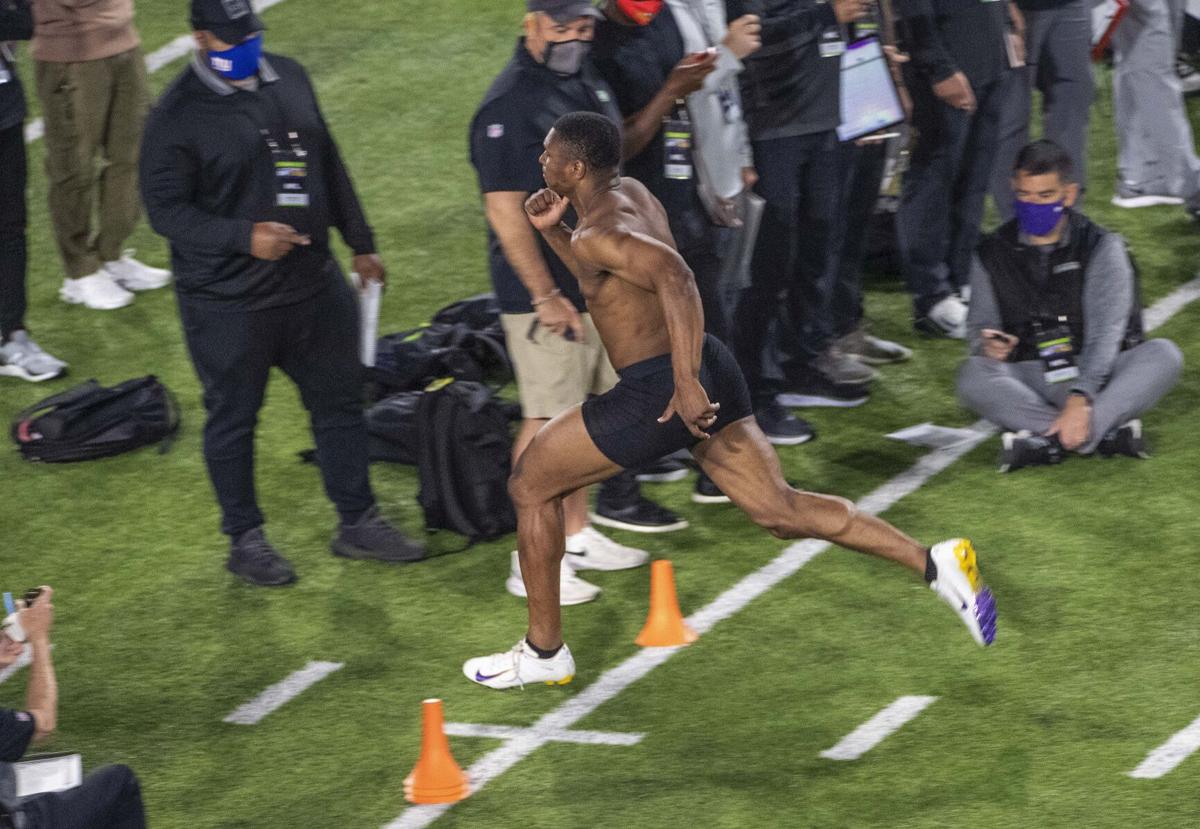 Defensive back JaCoby Stevens crosses the timing line for the scouts in the 40-yard dash during LSU's pro day Wednesday March 31, 2021, in Baton Rouge, La. 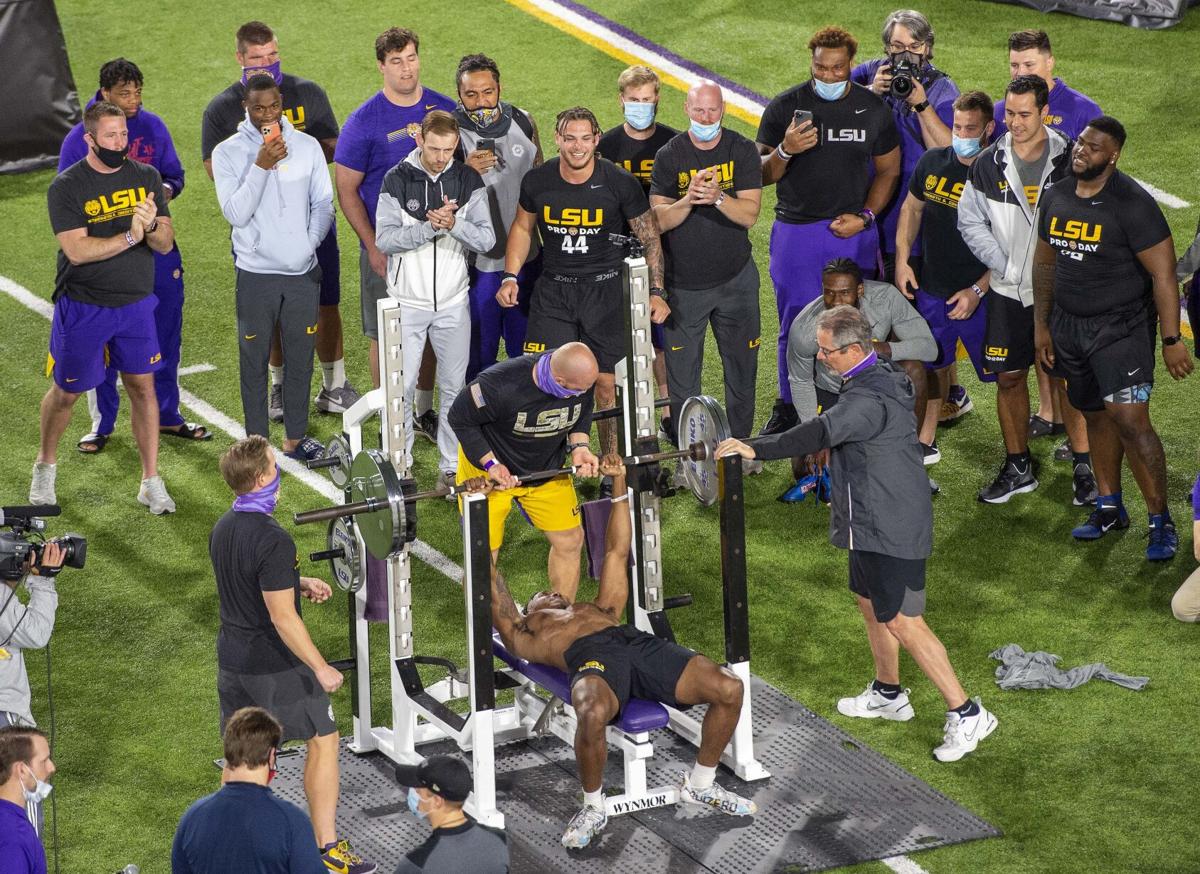 A crowd cheers on wide receiver Terrace Marshall Jr. as he does the bench press for 19 during LSU's pro day Wednesday March 31, 2021, in Baton Rouge, La. 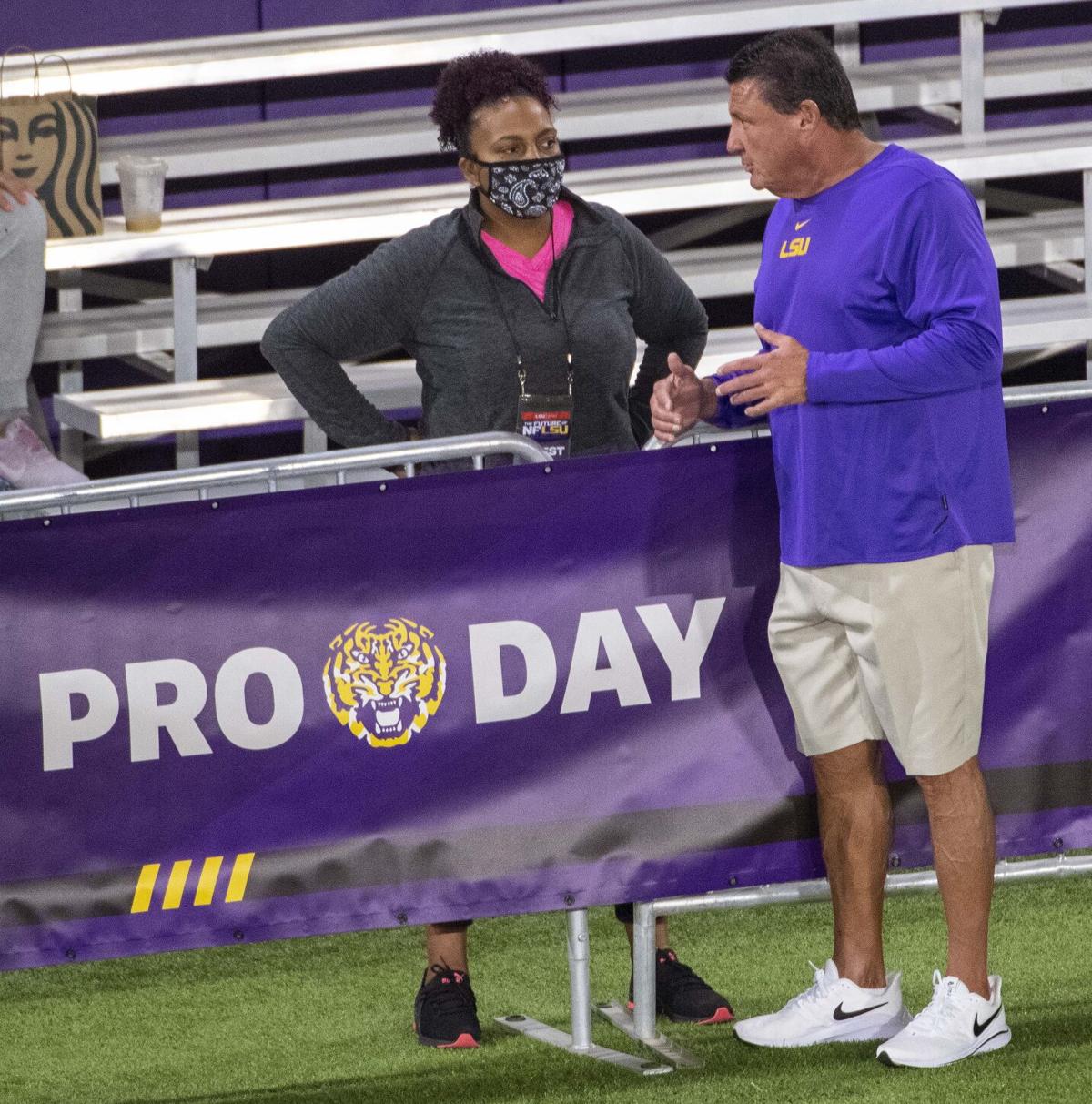 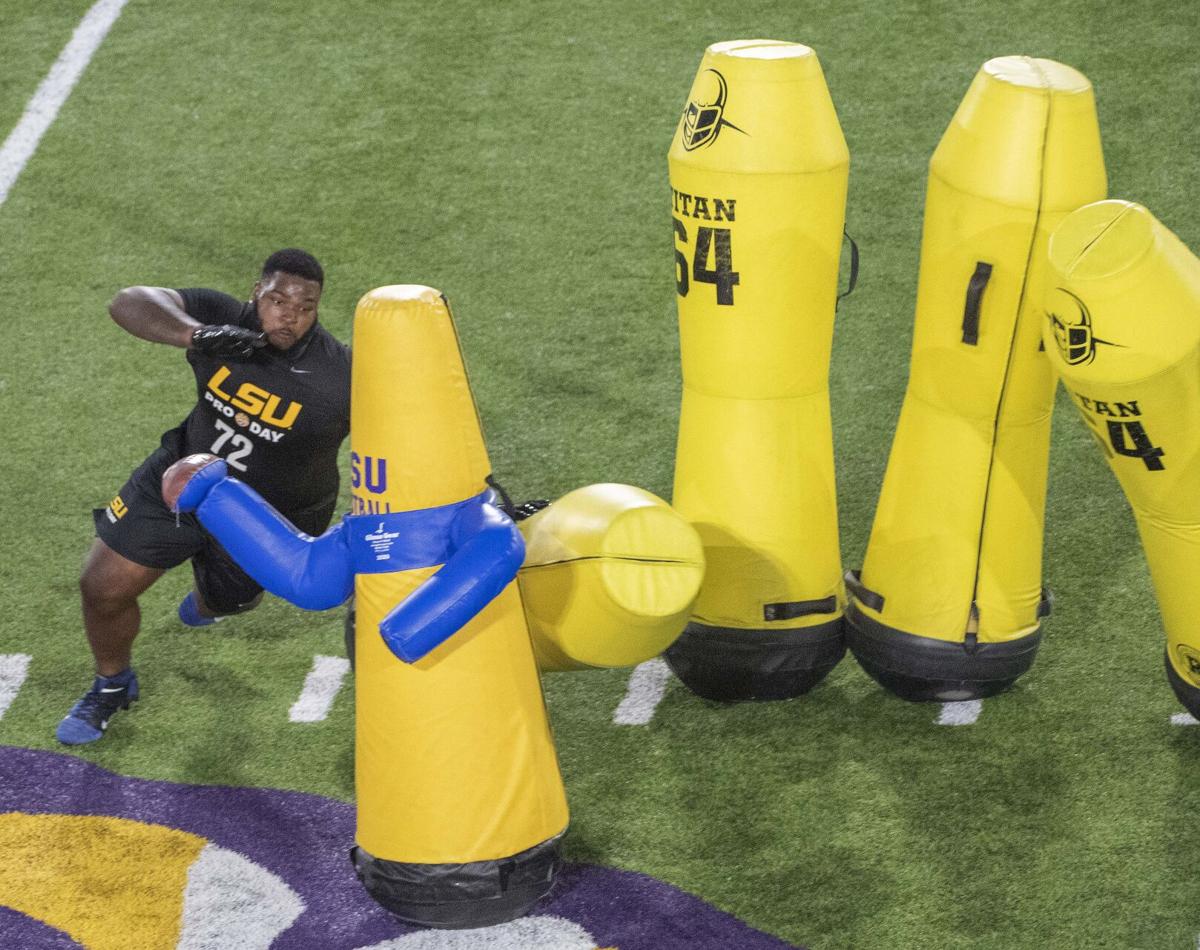 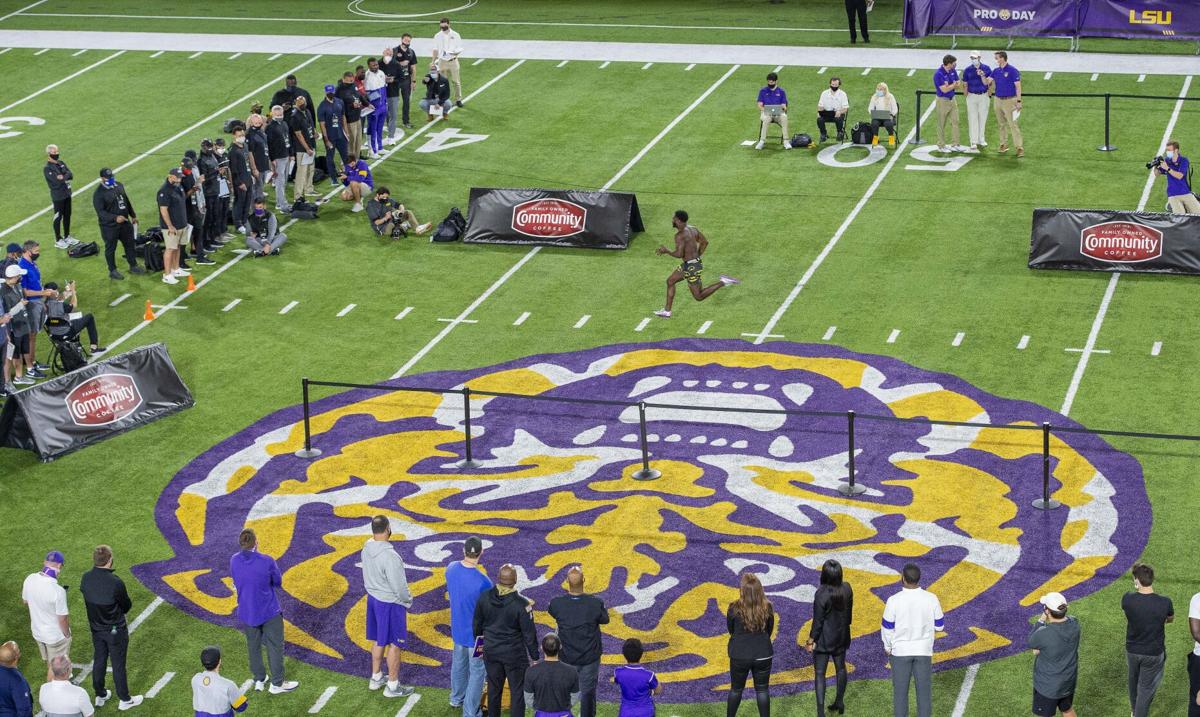 Defensive back Kary Vincent Jr. crosses the tiger field logo while running for the scouts in the 40-yard dash during LSU's pro day Wednesday March 31, 2021, in Baton Rouge, La.

Defensive back JaCoby Stevens crosses the timing line for the scouts in the 40-yard dash during LSU's pro day Wednesday March 31, 2021, in Baton Rouge, La.

A crowd cheers on wide receiver Terrace Marshall Jr. as he does the bench press for 19 during LSU's pro day Wednesday March 31, 2021, in Baton Rouge, La.

Defensive back Kary Vincent Jr. crosses the tiger field logo while running for the scouts in the 40-yard dash during LSU's pro day Wednesday March 31, 2021, in Baton Rouge, La.

The star wide receiver stepped forward after a year away from the game. NFL scouts clicked their pens inside LSU's indoor practice facility, scribbling on notepads as a team employee called out a name that was oh-so-familiar in the school's national championship season and oh-so-missed during a turbulent, coronavirus-ridden campaign.

The annual pro day event was all the more important Wednesday. It was the biggest chance LSU's pro-bound football players had to showcase their athleticism in front of scouts because the NFL scouting combine folded their event into local pro days amid COVID-19 concerns. Dozens of NFL evaluators had come to watch Chase, in particular, to see if the play-making receiver had missed a step after opting out before the 2020 season.

Playing shape. Almost the exact dimensions Chase was listed on LSU's official roster in 2019, when his compact, explosive body helped him separate from defenders and sprint for breakaway touchdowns. It's what made him a unanimous All-American that season, the Biletnikoff Award winner who set Southeastern Conference records for single-season receiving yards (1,780) and touchdowns (20).

Those records fell to Alabama's DeVonta Smith, last year's Heisman Trophy winner who washed over Chase's records with 1,856 yards and 23 touchdown receptions in a 13-game, national title season that was shortened by the global pandemic.

Smith's dominant 2020 was enough to call into question whether Chase will be the first wide receiver taken when the NFL draft begins April 29. Neither Smith nor his teammate Jaylen Waddle, another top wide receiver prospect, participated in timed or measured drills in Alabama's pro day on Tuesday. So, the burden of recent proof rested on Chase.

There ended up being plenty proof.

Each data point was particularly impressive.

Only three other receivers — Auburn's Anthony Schwartz (4.27 seconds), Purdue's Rondale Moore (4.28) and Ole Miss' Elijah Moore (4.35) — had posted sub-4.4 times in the 40-yard dash leading up to this year's draft, and Illinois' Josh Imatorbhebhe (46½) and Moore (42½) are the only receivers who've recorded vertical jumps higher than 40 inches.

The elite workout results, paired with an impressive LSU career, will almost certainly produce what so many draft previews and anonymous scouting reports will predict in the ensuing weeks: Ja'Marr Chase is a top-10 pick, possibly the first receiver off the board.

There are reports that the Cincinnati Bengals are interested with Chase at No. 5 overall, a selection that would reunite the receiver with LSU's Heisman Trophy-winning quarterback Joe Burrow. Chase confirmed he has indeed spoken with the Bengals and "wouldn't mind going back with Joe."

"You know, if we go back together," Chase said, "we'd try to do nothing but get back the chemistry and have some more fun."

LSU's record-setting offense in 2019 was defined by Burrow and a wide range of offensive weapons, including the triple-threat receivers Chase, Justin Jefferson and Terrace Marshall. Jefferson, a first-round pick by the Minnesota Vikings last season, attended LSU's pro day. He watched as Marshall tied Chase's 40-yard dash time with a 4.38-second mark himself.

Marshall is another potential first-round pick in a receiver-heavy NFL draft. The 6-2, 205-pound Shreveport native was on a record-setting pace as LSU's main target in 2020, a performance that tapered off to 731 yards and 10 touchdowns after starting quarterback Myles Brennan suffered a season-ending injury and ended with Marshall opting out after seven games.

There are plans for another LSU pro day before the NFL draft. Linebacker Jabril Cox was unable to participate in Wednesday's workout after straining his hamstring while preparing for the event. According to NFL Network, Cox told teams that he plans on participating in a "full combine program" before the draft, and, additionally, has video-taped his mock combines from training that he'll send to teams.

McMath rose from special teams star to starting wide receiver as a senior for LSU, and, after recording 522 yards receiving and four touchdowns in his college career, it's likely that he'll have to take the same path in the NFL. McMath said his special teams film was a consistent topic in his interviews with teams.

Wednesday was the first time Chase spoke publicly since he opted out before the season in 2020. He and two other teammates, nickel safety Kary Vincent and defensive tackle Tyler Shelvin, elected to sit out the year and prepared for their pro careers in relative privacy.

Chase, who said "a lot of family-based moments" led him to opt out, said it "was a little hard" to watch LSU's disappointing season last year. The hardest thing was watching them lose games he knew they were supposed to win. Sometimes, he said he had to turn the TV off.

Meanwhile, Chase trained for LSU's pro day in Pensacola, Florida, at the EXOS training facility located at the Andrews Institute. He worked on his speed and strength. Even that training didn't set his expectations where his performance landed.

"I would say I kind of surprised myself," Chase said.

Chase was aiming to sprint a 4.4, but, as of last night, he started "feeling good" about the way he was getting off the line. An NFL combine would normally test with lasers for the 40-yard dash, but Mark Gorscak, a Pittsburgh Steelers scout and the NFL combine's official dash starter, lent credibility to Wednesday's times by overseeing the sprints.

Vincent, also an LSU track sprinter, recorded the fastest time at 4.33. The 5-10, 185-pound defensive back said he trained with former LSU track athlete Morgan Wells in Florida, and, while Vincent's speed was impressive, he said he still intends to run it again at a later date.

It's likely Vincent will be most attractive to NFL teams as a nickel safety, a specialty defensive back who generally matches up with an opponent's slot receiver. The NFL and college game is increasingly moving toward a state where it's more about matchups and less about personnel packages.

LSU safety JaCoby Stevens said football is really "going toward a positionless game," which, in his case, may be beneficial considering the hybrid role he served during his career in Baton Rouge.

The 6-1, 212-pound Stevens played blends of free safety, strong safety and linebacker under two LSU defensive coordinators, and, while safety was his main position, he said several NFL teams spoke to him about playing linebacker.

Most teams, Stevens said, wanted to see whether he was athletic enough to play at the NFL level. His 4.50-second 40-yard dash time Wednesday was above average, but the Tennessee native's 42-inch vertical jump was certainly his most impressive performance.

Only two other defensive backs — Central Arkansas' Robert Rochell (43 inches) and Texas' Caden Sterns (42) — have yet to record a vertical jump of 42 inches or higher.

"I feel like I answered those questions," Stevens said.

LSU hosted its pro day Wednesday, an annual event in which its NFL-bound football players work out in front of pro scouts.