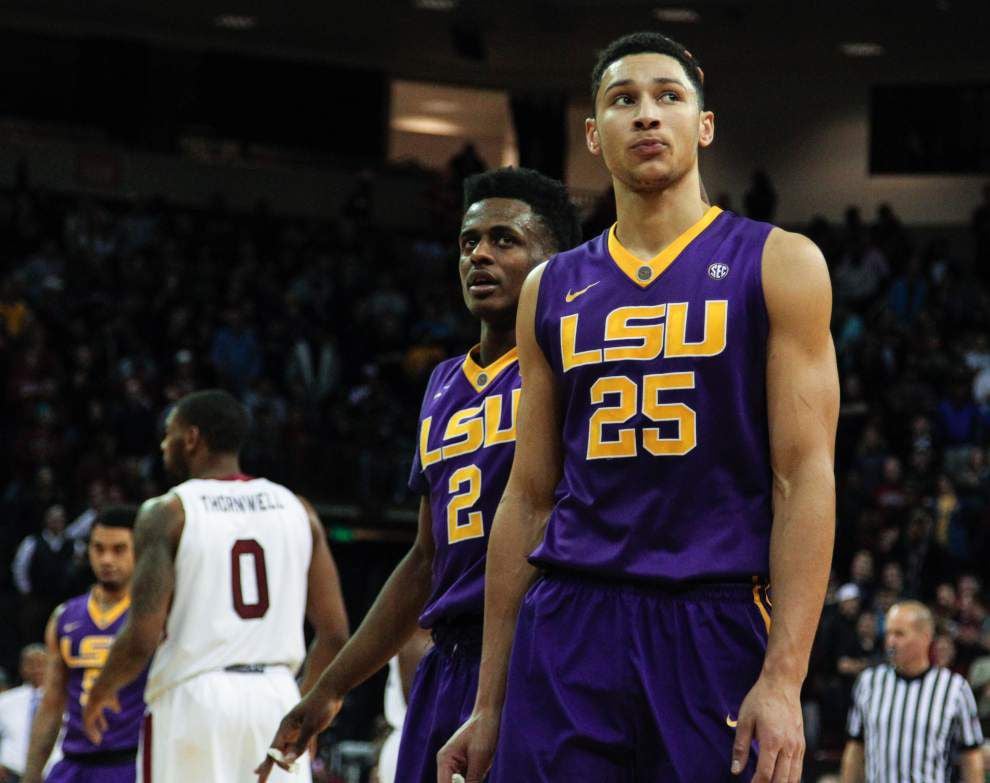 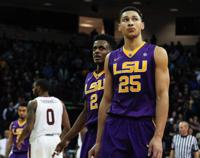 Photo provided by TRACY GLANTZ /The State -- LSU's Ben Simmons (25) and Antonio Blakeney (2) look to the USC fans during the second half of action in the Colonial Life Arena. USC won, 94-83. 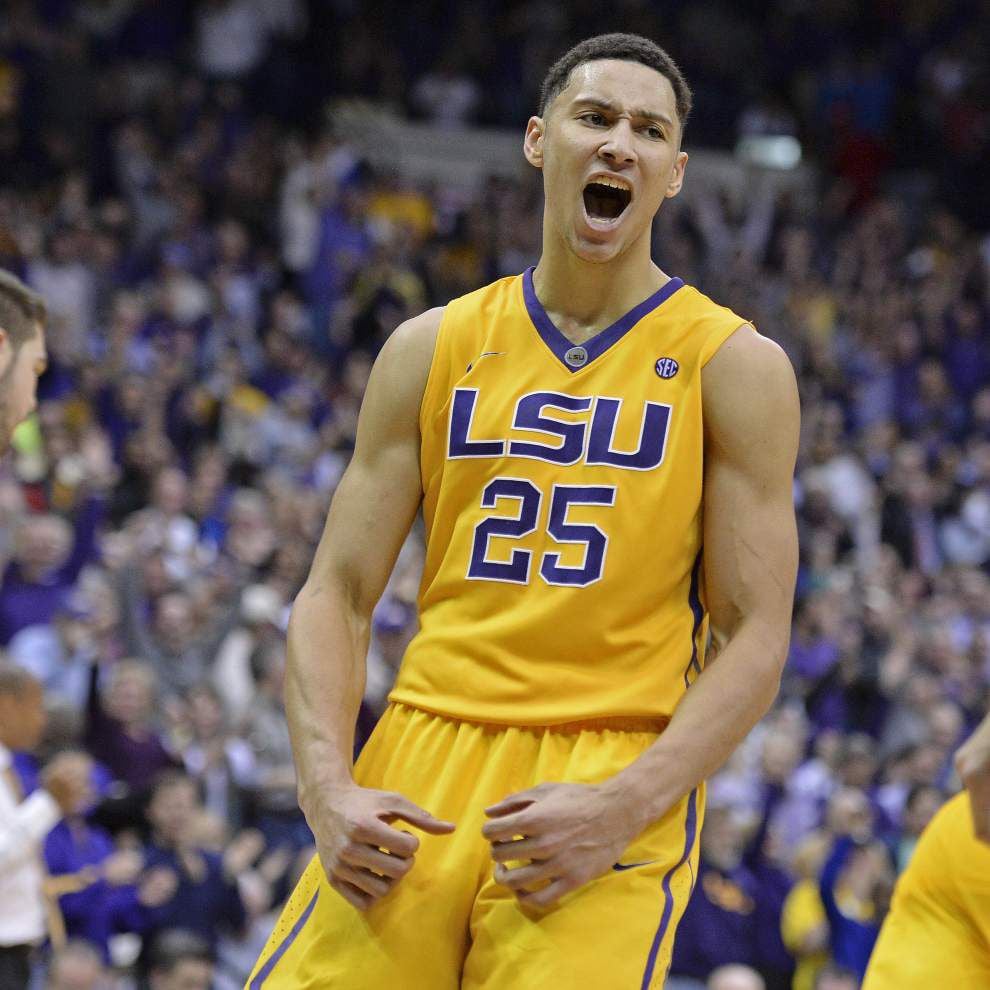 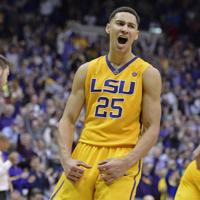 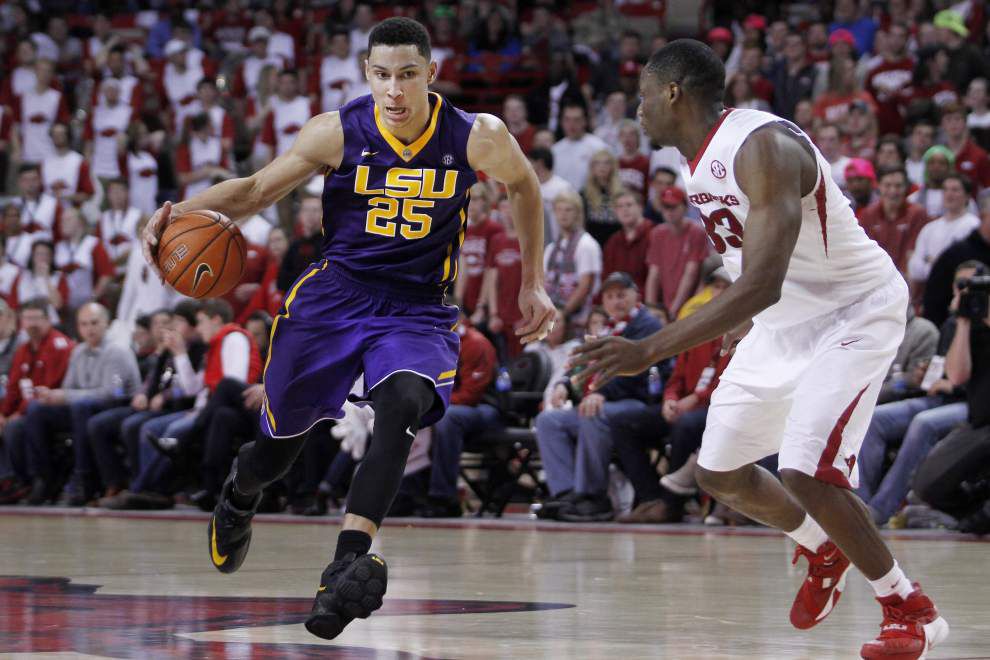 Photo provided by TRACY GLANTZ /The State -- LSU's Ben Simmons (25) and Antonio Blakeney (2) look to the USC fans during the second half of action in the Colonial Life Arena. USC won, 94-83.

Update, 7:39 p.m.: Ben Simmons has withdrawn from LSU and is moving to Phoenix awaiting the NBA Draft, according to sports podcaster Adam Zagoria.

In what was anything but unexpected news, LSU All-America forward Ben Simmons said he will enter the NBA draft.

ESPN’s Jeff Goodman first reported early Monday that Simmons, who was widely believed to be going pro after just one year of college basketball before he even signed with LSU in November 2014, said he’ll put his name in the draft and sign with an agent.

Simmons’ father, David, confirmed to The Advocate that his son will declare for the June 23 draft and that hiring an agent “shouldn’t be far off.”

Last week, Yahoo! Sports, citing NBA sources, reported that Ben Simmons likely would sign soon with the Cleveland-based Klutch Sports Group. The agency was founded by Rich Paul, a close friend of NBA superstar LeBron James. The agency also is funded by James, according to the report, and counts several high-profile NBA players among its clients.

By signing with an agent, Simmons, a native of Australia, will give up his final three years of college eligibility. He’s expected to be the first or second player picked in the draft.

The consensus No. 1 prep player in the country at Montverde Academy in Florida, Simmons averaged 19.2 points, 11.8 rebounds, 4.8 assists and 2.0 steals in his lone season at LSU. He led all freshmen nationally with 23 double-doubles.

“We are excited about this opportunity for Ben and his family,” LSU coach Johnny Jones said in a news release. “We certainly enjoyed the time we were able to spend with him here at LSU. He was a joy to coach and to be around on and off the floor.

“Ben was a tremendous teammate and a great competitor. He brought a great deal of excitement and enthusiasm to our team and did an outstanding job of making those around him better. That’s something this team will benefit from as we go forward.”

Despite his impressive numbers, Simmons, who was named national freshman of the year by USA Today, Sporting News and the U.S. Basketball Writers Association, couldn’t get LSU to the NCAA tournament.

The Tigers finished 19-14, then declined to be considered for the NIT after an embarrassing 33-point loss to Texas A&M in the SEC tournament semifinals sealed their NCAA fate.

LSU was the No. 4 seed in the SEC tournament after finishing in a three-way tie for third in the regular season at 11-7.

Simmons also was the SEC Freshman of the Year and was a first-team all-conference pick before being selected a first-team All-American in a vote of USBWA members.

He became only the ninth LSU men’s basketball player to earn first-team All-America honors from one of the recognized teams and was the first since Glen Davis led the Tigers to the Final Four in 2006.

Duke freshman Brandon Ingram has closed the gap on Simmons at the top of the draft board, but ESPN’s Goodman said the majority of NBA executives still have Simmons in the No. 1 spot.

If Simmons is the top selection, he’d become the first player since Pacific’s Michael Olowokandi in 1998 to be the first pick after his team failed to make the NCAA tournament.

David Simmons said the decision on an agent should come soon because of the Olympics in August and other important decisions his son’s representatives will have input in.

“He’s doing everything by the book. … He made this decision (to declare for the draft) and what follows with school will follow,” he said.

It was reported last week that Ben Simmons will prepare for the draft in Cleveland or Los Angeles if he signs with Klutch. The NBA scouting combine will be held May 11-15 in Chicago.

“He’s taking a break (from basketball) right now,” David Simmons said. “It’s been a long time. These guys started back in the summer and then had the tour in Australia (in August). I don’t think they stopped until the season was over.”

“We knew there was a great possibility Ben would only be at LSU for one season,” Jones said. “If you are going to have a guy to do that, Ben was the perfect one because of how much of a team player he is.

“We certainly feel as if he’s going to have a bright future as he continues to work hard to achieve his goal of playing at the highest level in the NBA. He impacted our team and our program during the year that he spent here. We wish him all the best.”