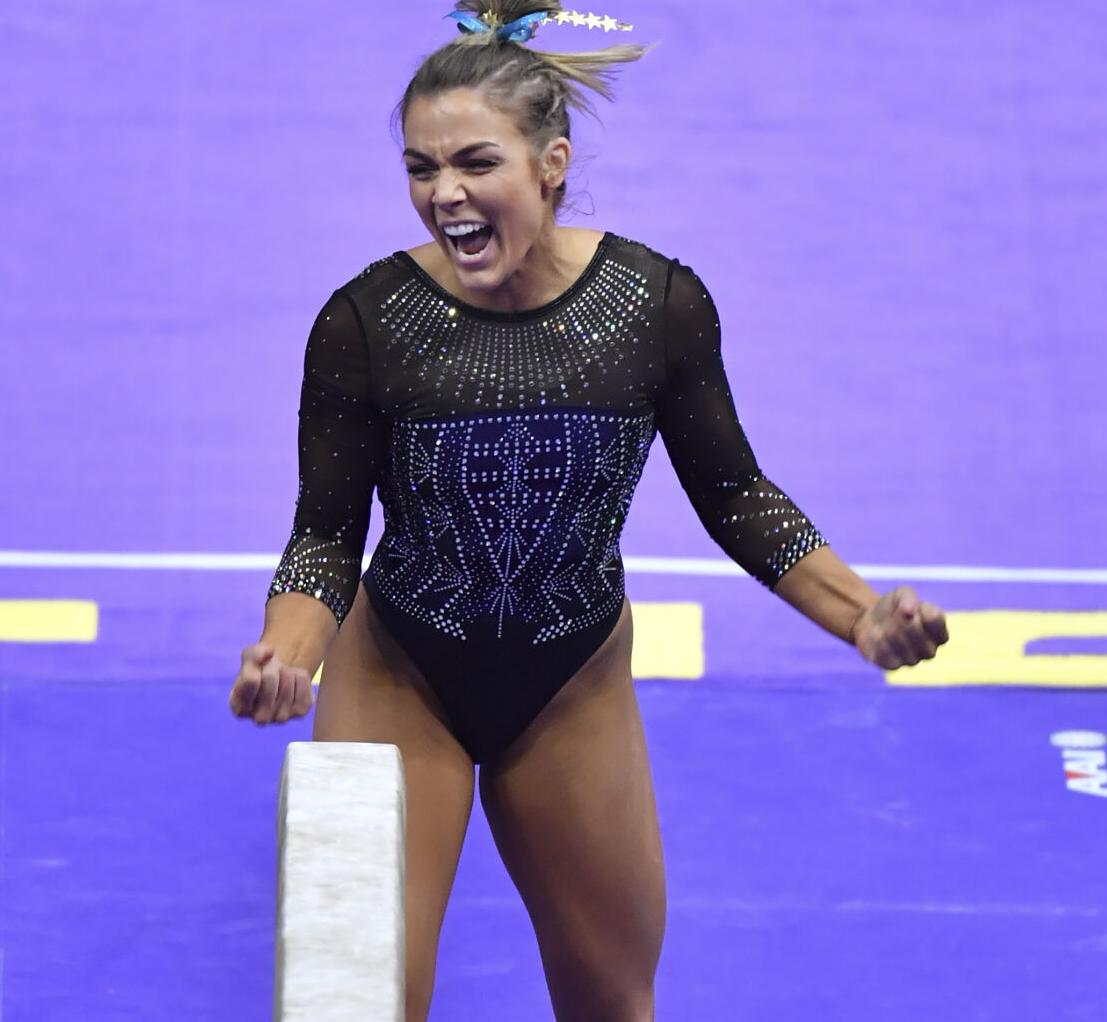 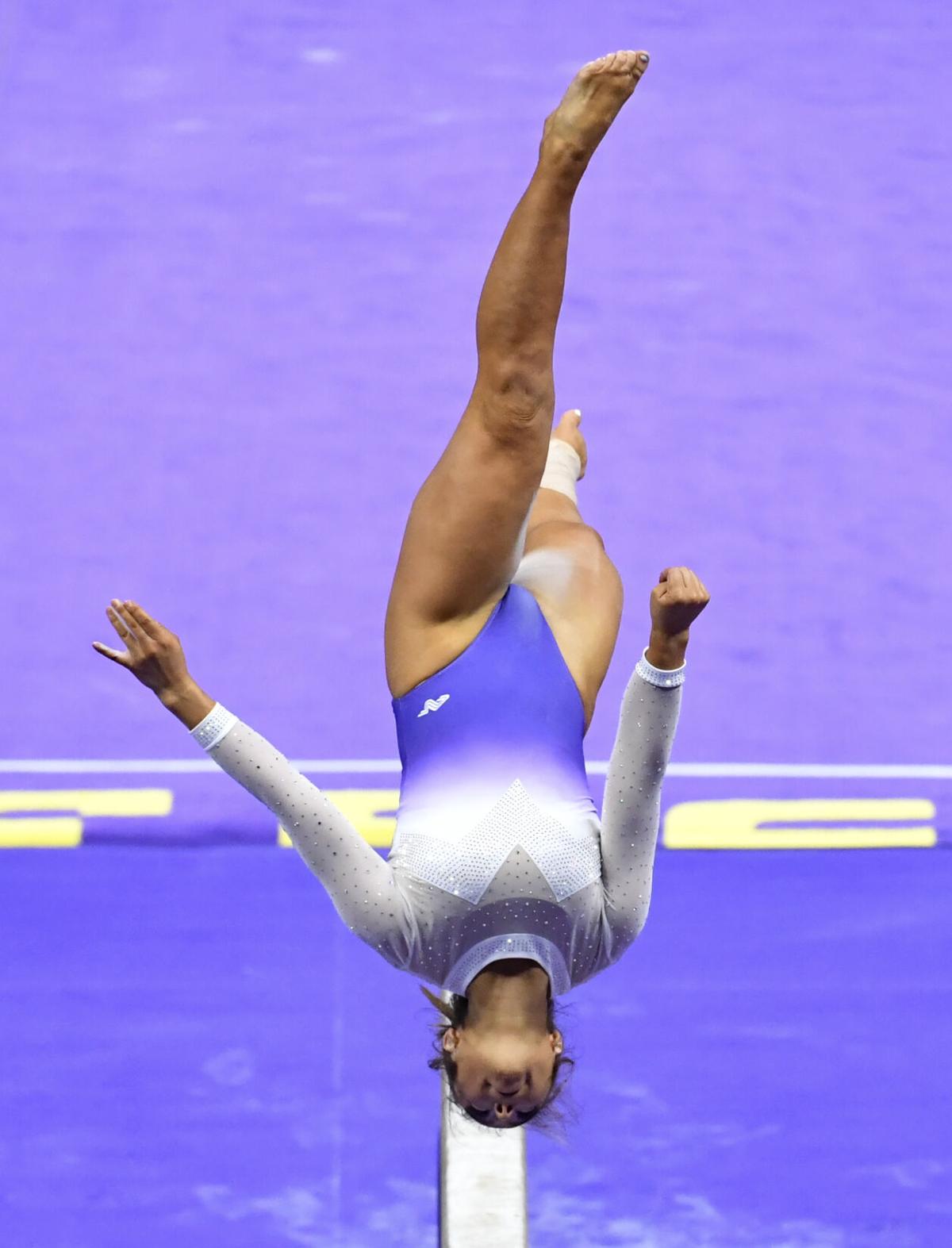 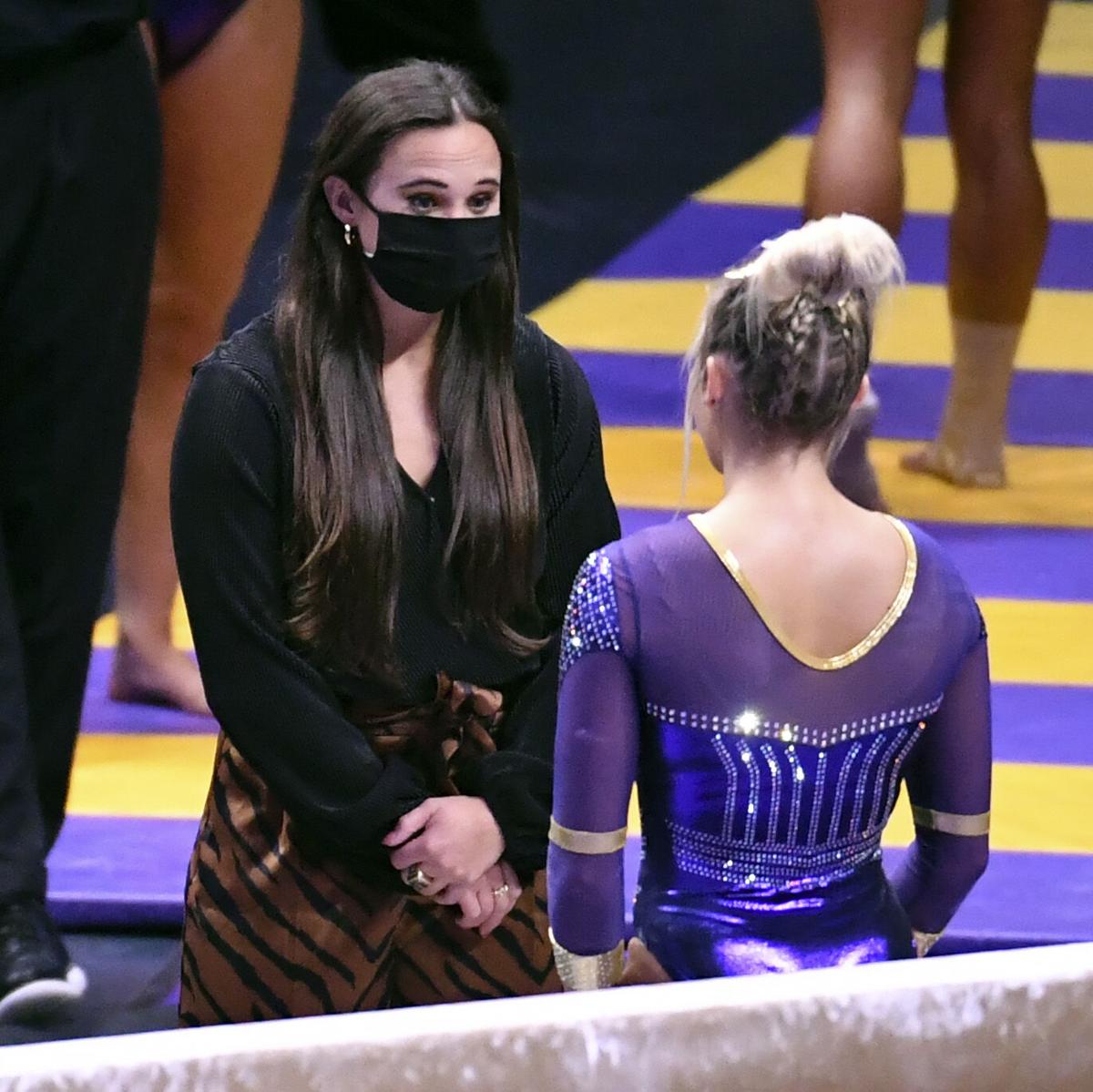 LSU assistant coach Ashleigh Gnat speaks to senior Sami Durante before she competes on beam against Georgia, Friday, January 22, 2021, at the Pete Maravich Assembly Center. Durante scored a 9.850 in the event. 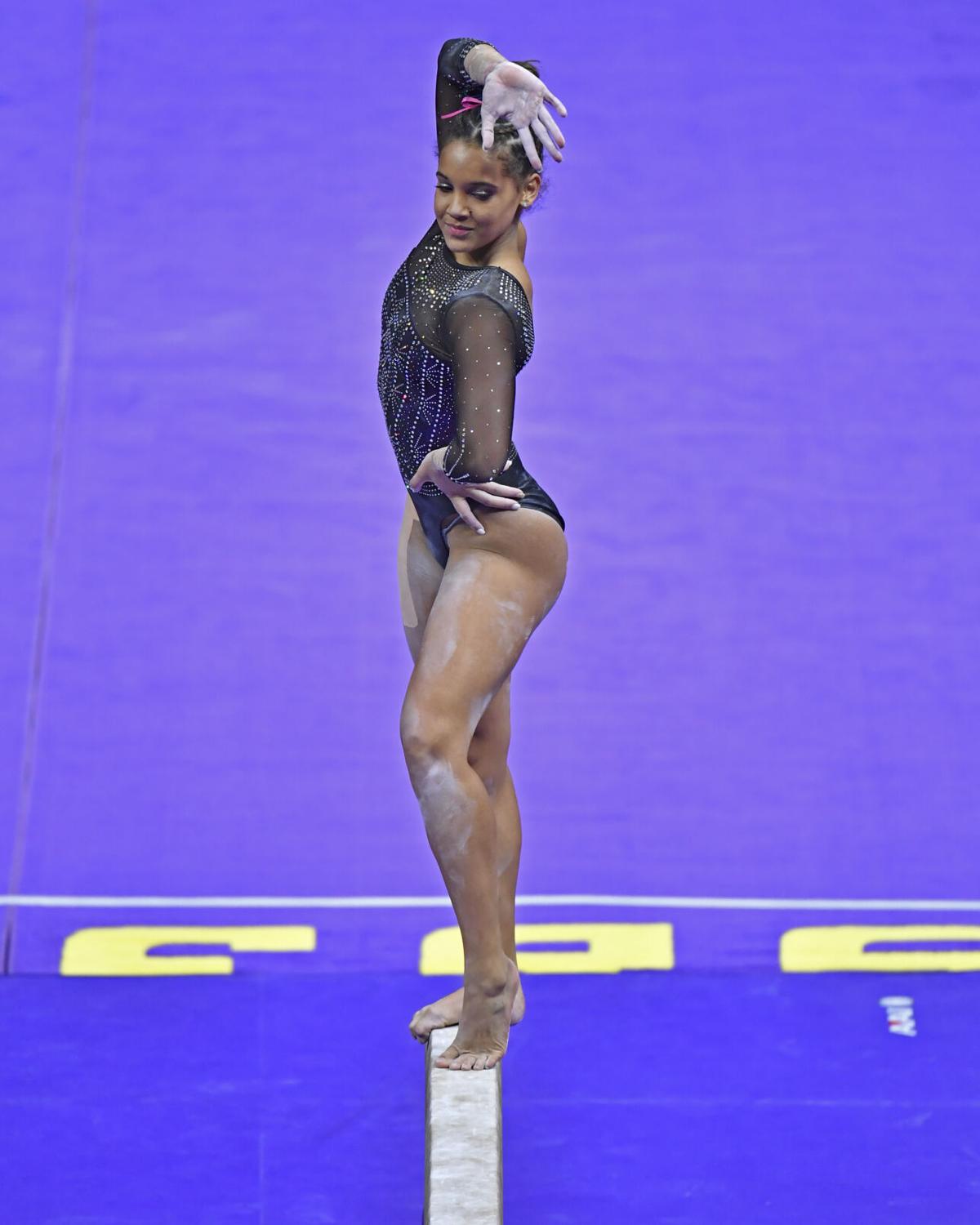 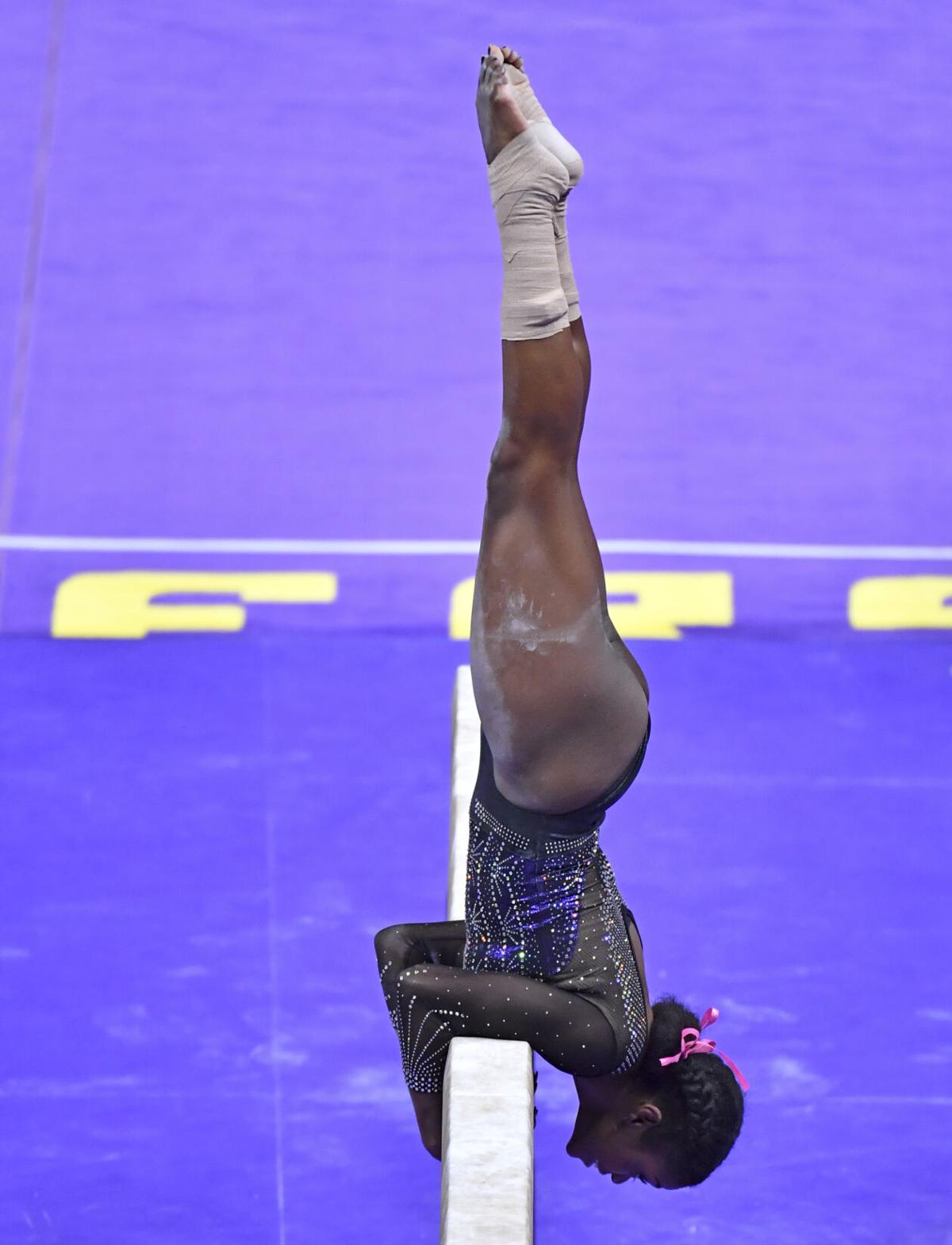 LSU assistant coach Ashleigh Gnat speaks to senior Sami Durante before she competes on beam against Georgia, Friday, January 22, 2021, at the Pete Maravich Assembly Center. Durante scored a 9.850 in the event.

Even the name of women’s gymnastics’ most anxiety-inducing event puts the mind ill at ease. The word “balance” implies there can be a lack of it.

LSU assistant coach Ashleigh Gnat was a three-time All-American on beam as a Tiger. She coaches the current Tigers on beam now. The way she describes it, beam sounds like a discipline to be tamed, not exactly embraced.

“Beam is always going to be beam,” Gnat said. “It’s the place where if there are nerves or any type of tension it will show. It’s always part of the sport. It’s the reason why beam scores aren’t as consistent (as other events).”

The No. 3 national seed heading into NCAA regional competition, LSU earned the No. 1 seed in the Salt Lake City regional, set for Thursday-Saturday at the Maverik Center in West Valley City, Utah. But that No. 1 regional seed didn’t earn the Tigers anything special in a blind draw for the order of competition in the four-team second semifinal session Saturday.

The LSU gymnastics team will try to take a western path to the program’s first NCAA championship this year.

As fate would have it, LSU drew beam for its first event. The Tigers go from there to floor exercise, vault and finish on uneven bars. The Olympic rotation, which home teams do in dual meets, is vault, bars, beam and floor.

LSU coach Jay Clark is less than pleased with the entire process to determine the order of competition. He doesn’t understand why there has to be a process at all.

“Our coaches’ organization doesn’t believe the top seeds should have any advantage at all,” Clark said. “So we do a draw.

“It seems odd. We’re different from most sports. In the (NCAA) basketball tournament, the No. 1 seed is rewarded with being able to face a 16 seed. In our sport there’s no advantage to being the top seed, other than the perception and reality that you have done well.”

That being said, Clark doesn’t want starting on beam to be a worry for his team.

“I guess it’s all in the name of being equitable,” he said. “I’m not opposed to that. Parity and equity is great for all sports. But achievement is what sport is about and what it’s rooted in. I don’t agree with the policy.”

According to the NQS, the National Qualifying Score which is an average of a team’s best four scores with a minimum of two away meets, beam is LSU’s worst event with a 49.444.

Of course, “worst” is a matter of perspective. LSU’s beam NQS ranks No. 7 nationally. And taking the Tigers’ beam scores from the entire season into account, LSU has the nation’s fourth-best average of 49.272.

Haleigh Bryant said from the first time she watched a college gymnastics meet on TV she knew she wanted to come to LSU.

“I’m not bent out of shape about starting on beam,” Clark said. “It’s a strong event for us. We’re experienced and comfortable on beam. When we do intrasquad meets, it seems beam is our best event.”

Gnat said LSU able to draw from a deep pool of talent, with 16 of the Tigers’ 19 gymnasts training on beam.

“We’re fortunate to have the depth we have,” Gnat said. “That’s a gift.”

LSU bookends its beam lineup with experience. Senior Christina Desiderio has led off beam for three years for the Tigers. Senior Reagan Campbell — who has battled through injuries, including a bad back, to compete — is LSU’s anchor.

The middle four of LSU’s beam routine includes senior Sami Durante, SEC freshman of the year Haleigh Bryant, senior Bridget Dean and sophomore SEC specialist of the year Kiya Johnson. Clark says Alyona Shchennikova, who joined Bryant, Durante and Johnson in earning All-America honors last week, could also be easily inserted into the lineup without concern for a drop off.

“I look at our lineup and they’re all capable of going 9.90 or better,” Clark said.

An added element to difficulty on beam is the atmosphere of a championship meet. In a dual meet with two teams competing against each other the teams take turns performing, with beam workers going to the backdrop of their own chosen music. But in a meet like the NCAA regional, competition is going on all four events at the same time, and the only music is from another team’s floor routines.

For that reason, Gnat said the Tigers practice under all sorts of different scenarios.

“We practice with all types of music and noise,” she said. “Some gymnasts cue into a song they’re singing in their head. It’s all individual.”

The very last performance of Gnat’s dazzling collegiate career was on beam in the 2017 NCAA Super Six. She anchored LSU’s lineup with a 9.95, then tearfully waved to the crowd.

Did she enjoy doing beam?

“I guess,” Gnat said. “Every moment you compete is special.”

That’s as about as close to a ringing endorsement balance beam is likely to get.

The scoring assistants at the Southeastern Conference Gymnastics Championship twirled their boards, revealing the marks on floor for LSU’s Kiy…