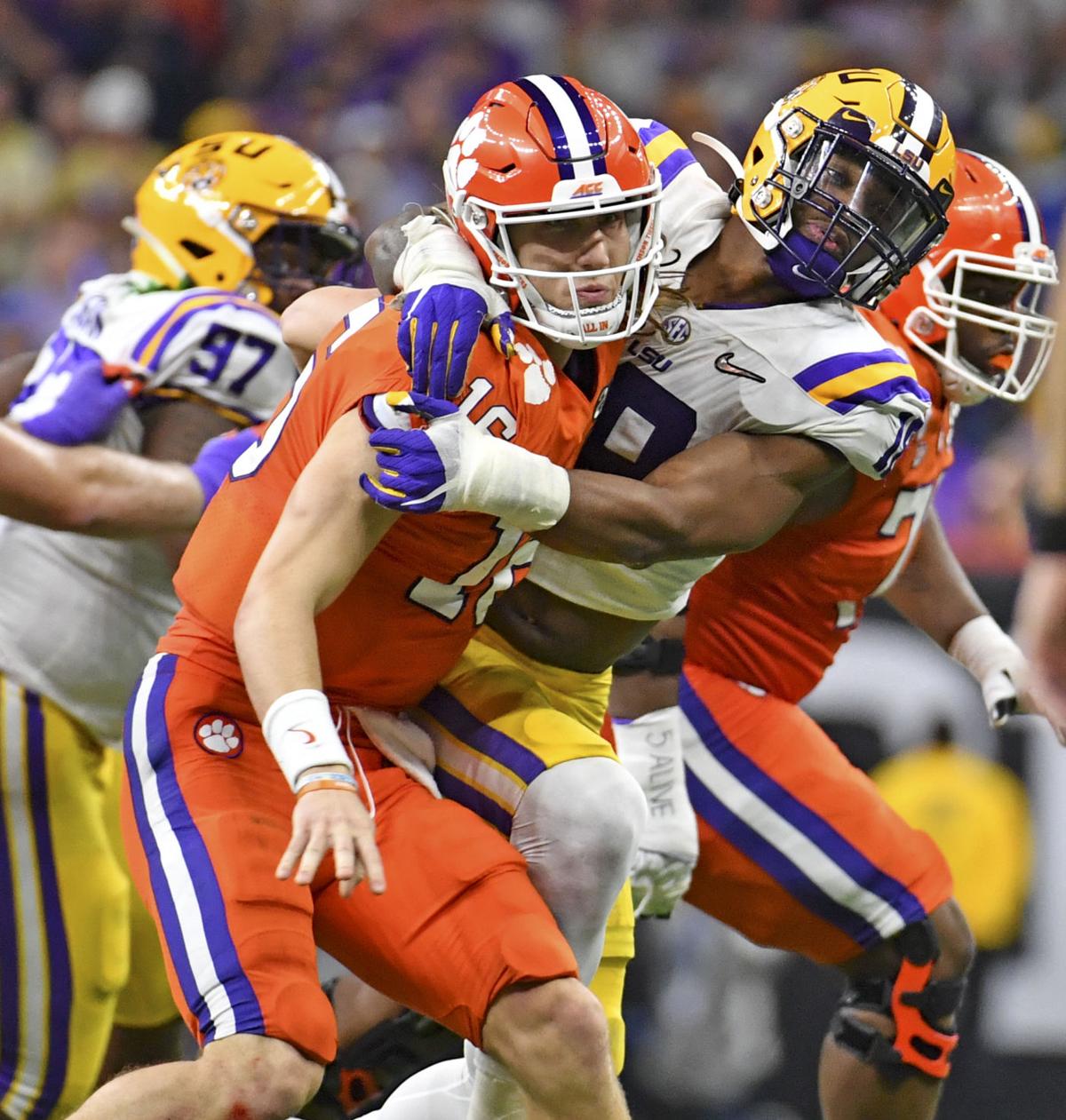 LSU linebacker KÕLavon Chaisson (18) pressures Clemson quarterback Trevor Lawrence (16) in the second half between LSU and Clemson in the National Championship, Monday, January 13, 2020, at the Mercedes-Benz Superdome in New Orleans, La. 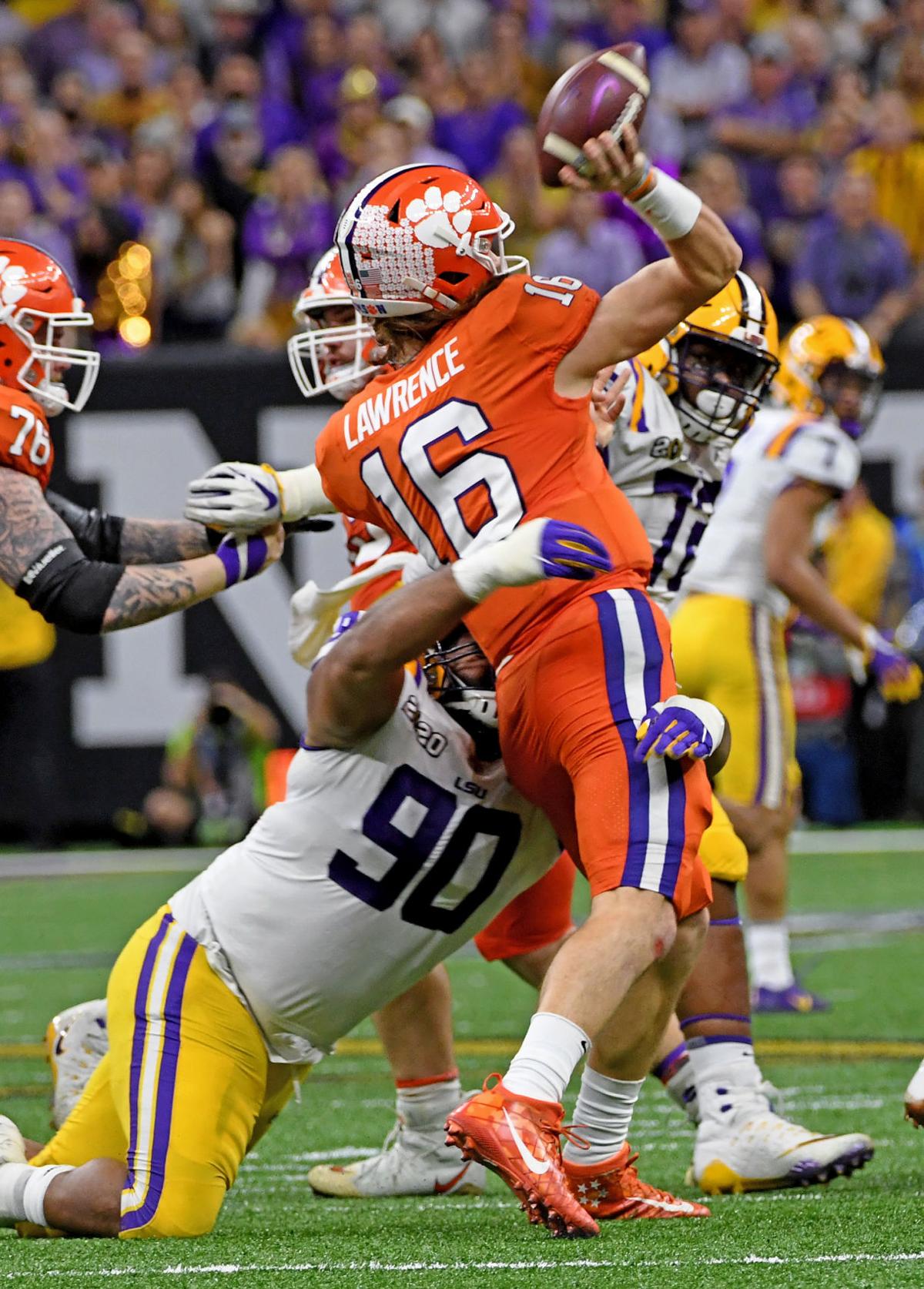 Clemson quarterback Trevor Lawrence (16) is pressured by LSU defensive lineman Rashard Lawrence (90) during the first half of LSU's CFP Championship Game against Clemson at the Mercedes-Benz Superdome Monday Jan. 13, 2020, in New Orleans, La. 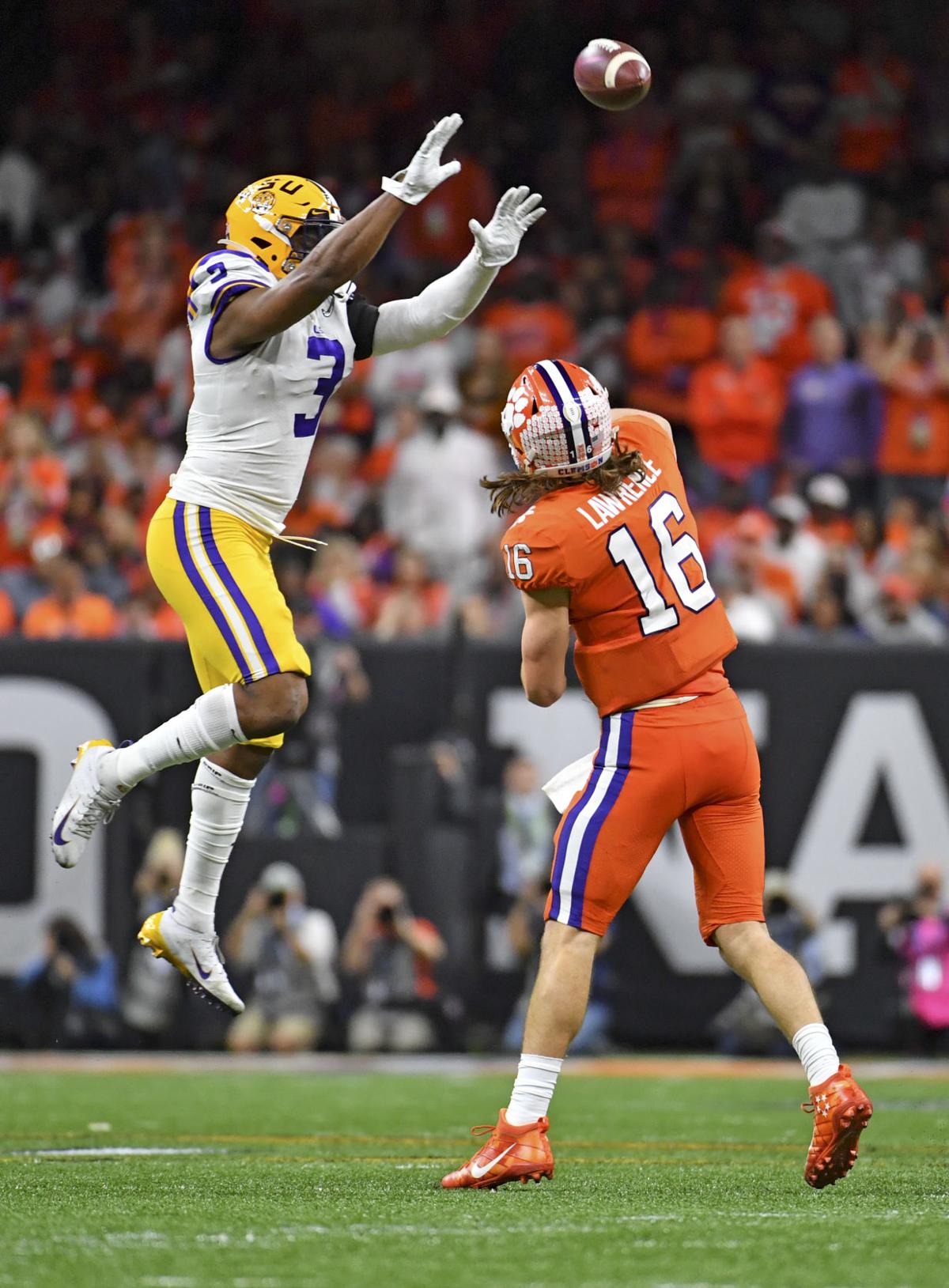 LSU safety JaCoby Stevens (3) pressures Clemson quarterback Trevor Lawrence (16) on the pass in the second half between LSU and Clemson in the National Championship, Monday, January 13, 2020, at the Mercedes-Benz Superdome in New Orleans, La.

LSU linebacker KÕLavon Chaisson (18) pressures Clemson quarterback Trevor Lawrence (16) in the second half between LSU and Clemson in the National Championship, Monday, January 13, 2020, at the Mercedes-Benz Superdome in New Orleans, La.

Clemson quarterback Trevor Lawrence (16) is pressured by LSU defensive lineman Rashard Lawrence (90) during the first half of LSU's CFP Championship Game against Clemson at the Mercedes-Benz Superdome Monday Jan. 13, 2020, in New Orleans, La.

LSU safety JaCoby Stevens (3) pressures Clemson quarterback Trevor Lawrence (16) on the pass in the second half between LSU and Clemson in the National Championship, Monday, January 13, 2020, at the Mercedes-Benz Superdome in New Orleans, La.

On the first snap of Monday’s CFP national championship, quarterback Trevor Lawrence faked a hand-off, threw an underneath route to Justyn Ross on the edge, who followed by tossing an option pitch.

LSU read it, and swallowed it up. The play lost 6 yards.

In retrospect, it should've served as a sign. The Clemson offense knew what it was up against.

Rabalais: LSU football had the best season of all time. Need proof? Look at path to national title

The Tigers would have to score and score often. And it required doing everything they could think of to put points on the board.

It turned out, Lawrence and his offense could’ve used a bit more misdirection. Because after 29 consecutive wins for Clemson and his status among the biggest names in college football, Lawrence simply couldn’t keep Clemson’s offense in the fight by standing in the pocket Monday night.

“It sucks,” Lawrence said after being dealt his first loss.

The sophomore was lauded by coaches and teammates for his unflappability in pressure situations and championship moments, but as LSU surged in the final three quarters of Monday’s title game, Lawrence couldn’t rise to the same stage.

Instead, he completed just 10 of 25 passes from the second through fourth quarters and failed to tally a touchdown as LSU turned a 17-7 deficit into a commanding 42-25 victory.

“It was a lot of different things I think,” Lawrence said. “First of all, I think LSU did a good job of getting a lot of pressure and mixing up coverages. But I really just didn’t play well enough to win. There were too many missed plays, and I missed a lot of receivers. It just wasn’t my night.”

And just when it seemed it couldn’t get any worse, Lawrence allowed LSU to end all doubt when Grant Delpit stripped the Clemson quarterback in the final four minutes, unceremoniously ending his undefeated record.

It was the final thud of a long night inside the Mercedes-Benz Superdome .

Early on, Lawrence and Clemson stood toe-to-toe with LSU’s defense.

Lawrence unleashed darts across the field in many of his first few drives, ripping off a series of big plays through the air and using his feet to evade LSU blitzes. He fired to weapons like Ross, Tee Higgins, Travis Etienne and Amari Rodgers, keeping the Tigers within striking distance of Joe Burrow and the otherworldly LSU offense at the other end.

Lawrence piled up 130 yards in the first quarter alone.

It just didn’t last. And it largely came down to a single situation.

Clemson converted just 1 of 11 third-down attempts, thwarting a cavalcade of promising drives, as Lawrence failed to overcome bad down-and-distance situations. He underthrew, overthrew and held the ball too long, unable to get Clemson’s offense any traction.

“It’s probably the worst we’ve played on third down in a long time,” coach Dabo Swinney said. “We had a lot of chances on third down, and we just didn’t get it done.”

“It was both for sure,” Lawrence said. “A couple of times they schemed it pretty good and just stopped us on third down, but a handful at least were missed throws or we didn’t make a good play on the ball. It’s a lot of different things.”

Meanwhile, LSU was surgical in its attack over the final three periods, pouring on points while Clemson watched its 10-point lead instantly wither away and then become a distant memory. Lawrence failed to surpass 100 yards over the final three quarters (until the game was entirely out of doubt), while Burrow kept coming, piling up 463 yards and five touchdowns.

“We gave up too many big plays, and there just weren’t enough from us,” Swinney said. “We had a chance to do it in the fourth quarter, and we just couldn’t come up with any of the plays to get ourselves back into it.

“Give them credit. I thought LSU played a beautiful game. I thought their quarterback was tremendous. They made some incredible plays that were really well covered, at least some of them. And that’s what you have to do in these type of games.

“They were the better team tonight, for sure.”

How did New Orleans fare in its big national championship party? Revelers were well behaved

The celebration after LSU won its latest college football national championship in New Orleans on Monday did involve big crowds, fireworks, an…