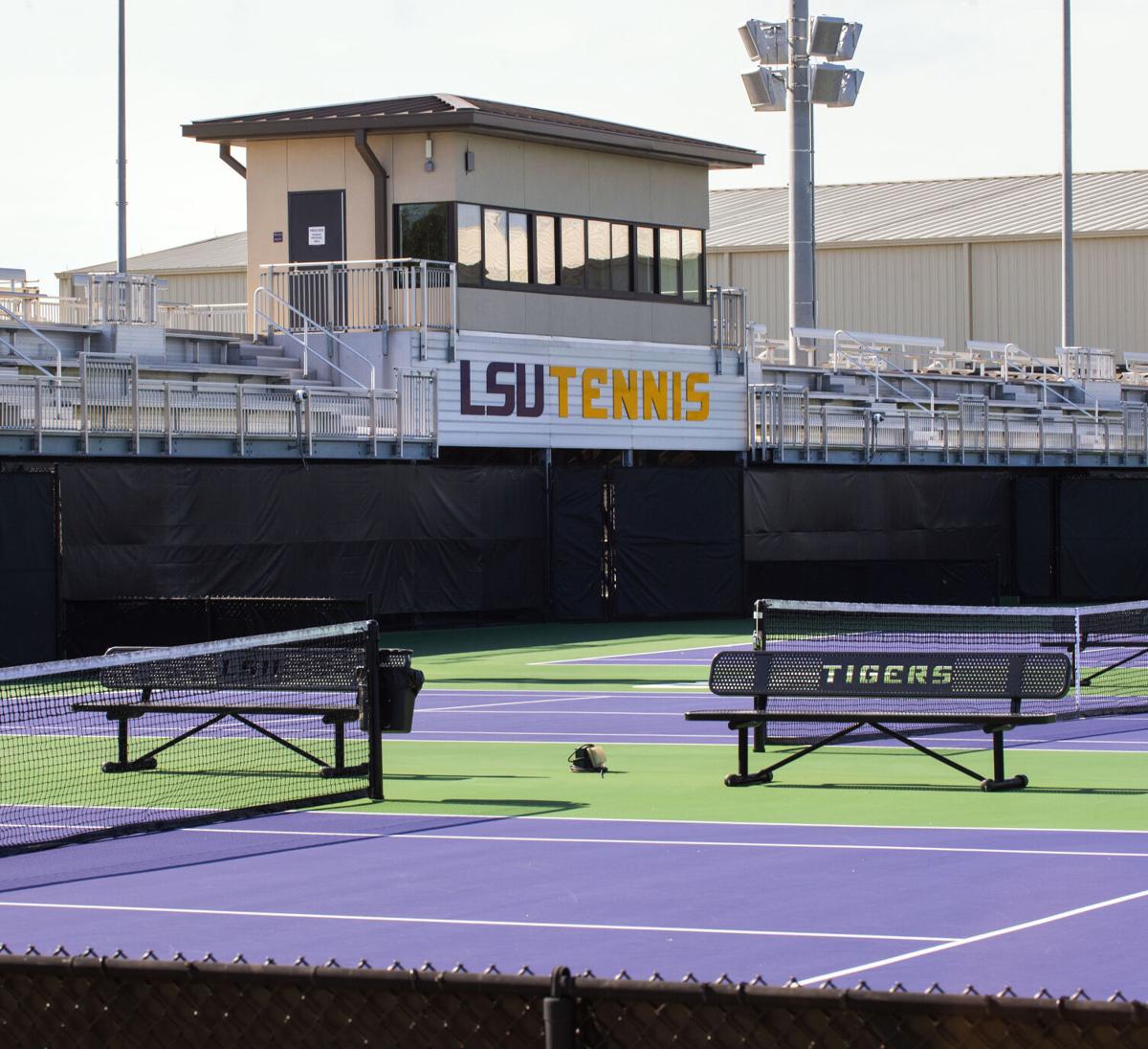 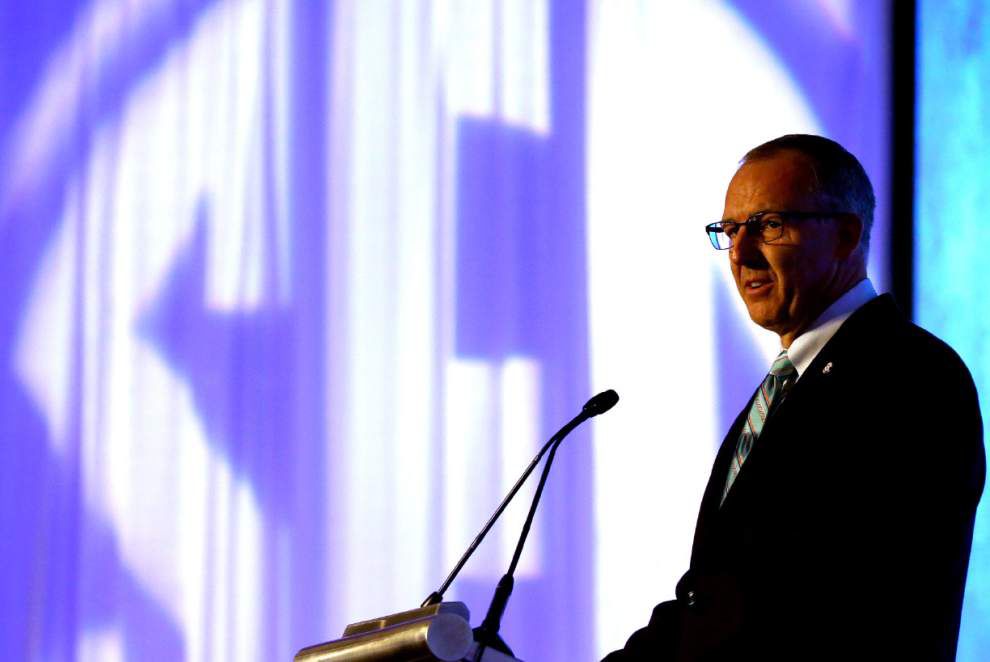 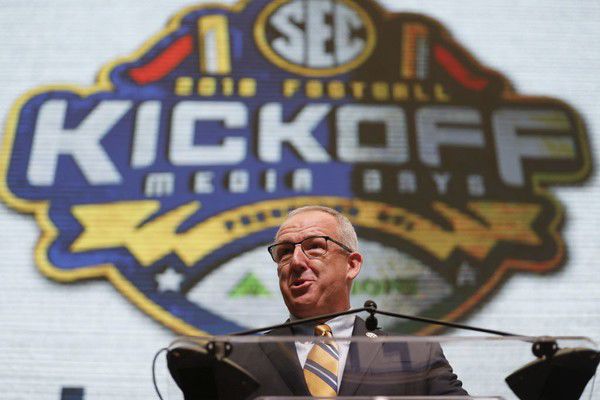 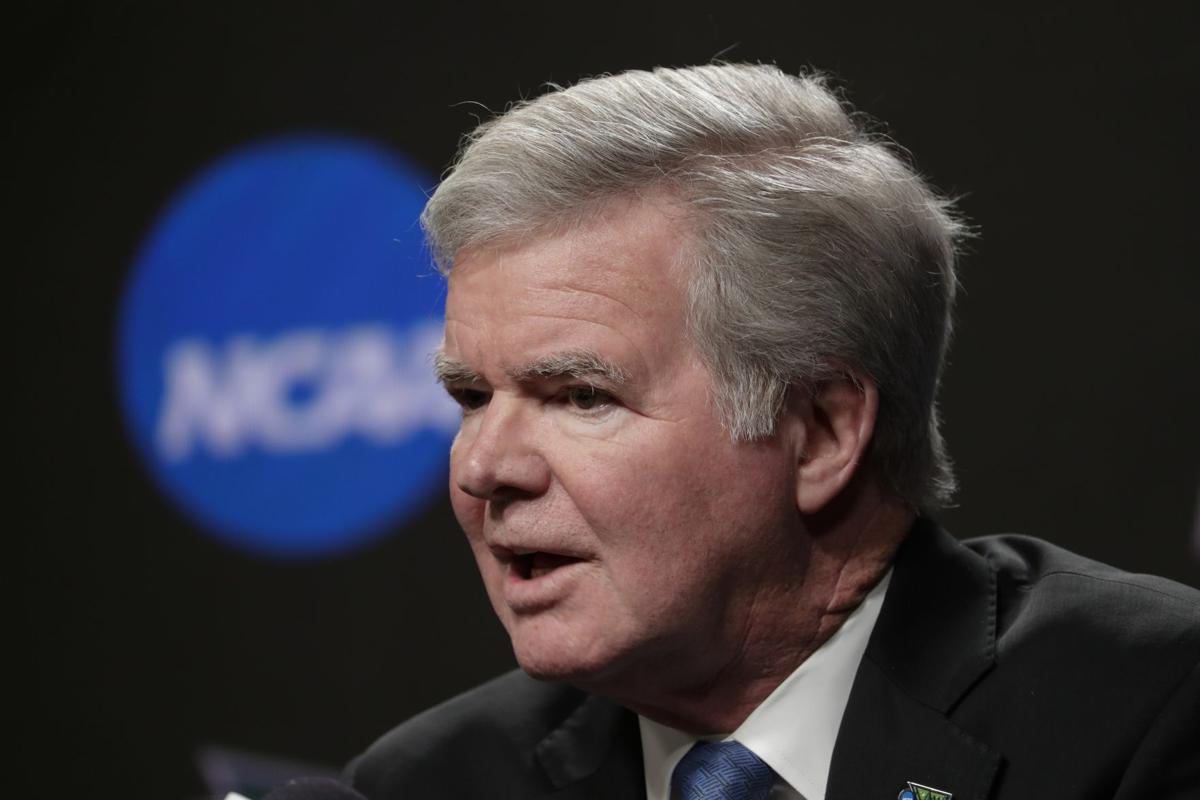 FILE - In this April 4, 2019, file photo, NCAA President Mark Emmert answers questions at a news conference at the Final Four college basketball tournament in Minneapolis. Emmert says it is “highly probably” federal legislation will pass that sets national guidelines for how college athletes can be compensated for the their names, images and likenesses. Emmert spoke Wednesday, Dec. 11, 2019, at the Learfield/IMG Intercollegiate Athletic Forum sponsored by the Sports Business Journal, in New York. (AP Photo/Matt York, File) ORG XMIT: NY185 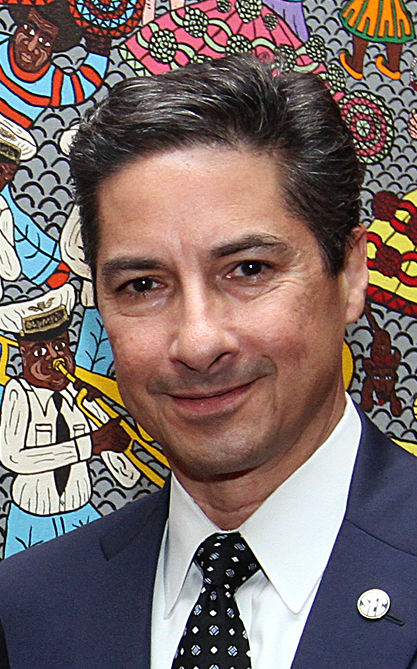 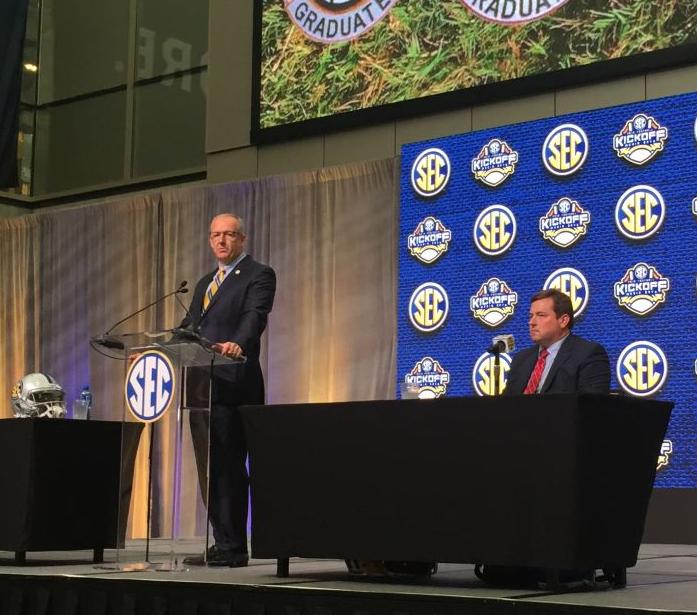 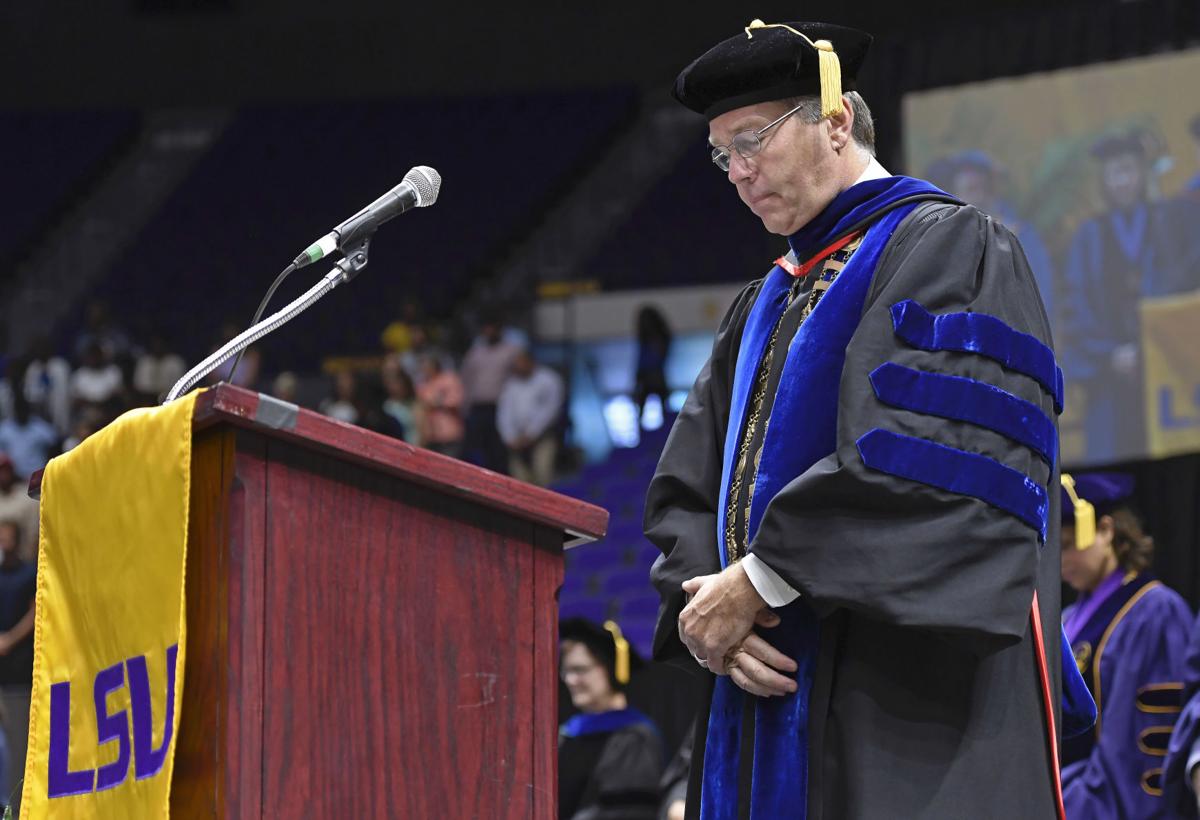 LSU president F. King Alexander pauses for a moment of silence for LSU graduates who have died in the past year including the three graduates who died in the Bahamas helicopter accident, during LSU's Summer Commencement ceremonies Friday August 2, 2019, in Baton Rouge, La. 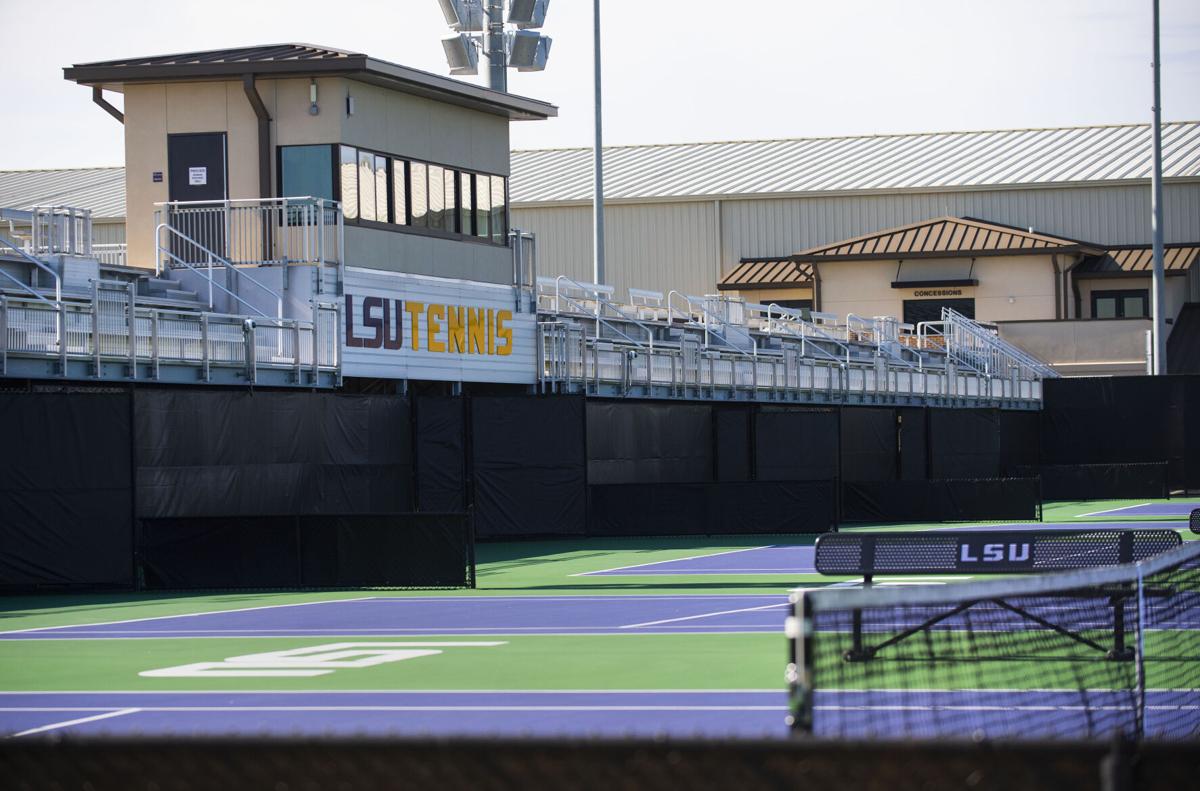 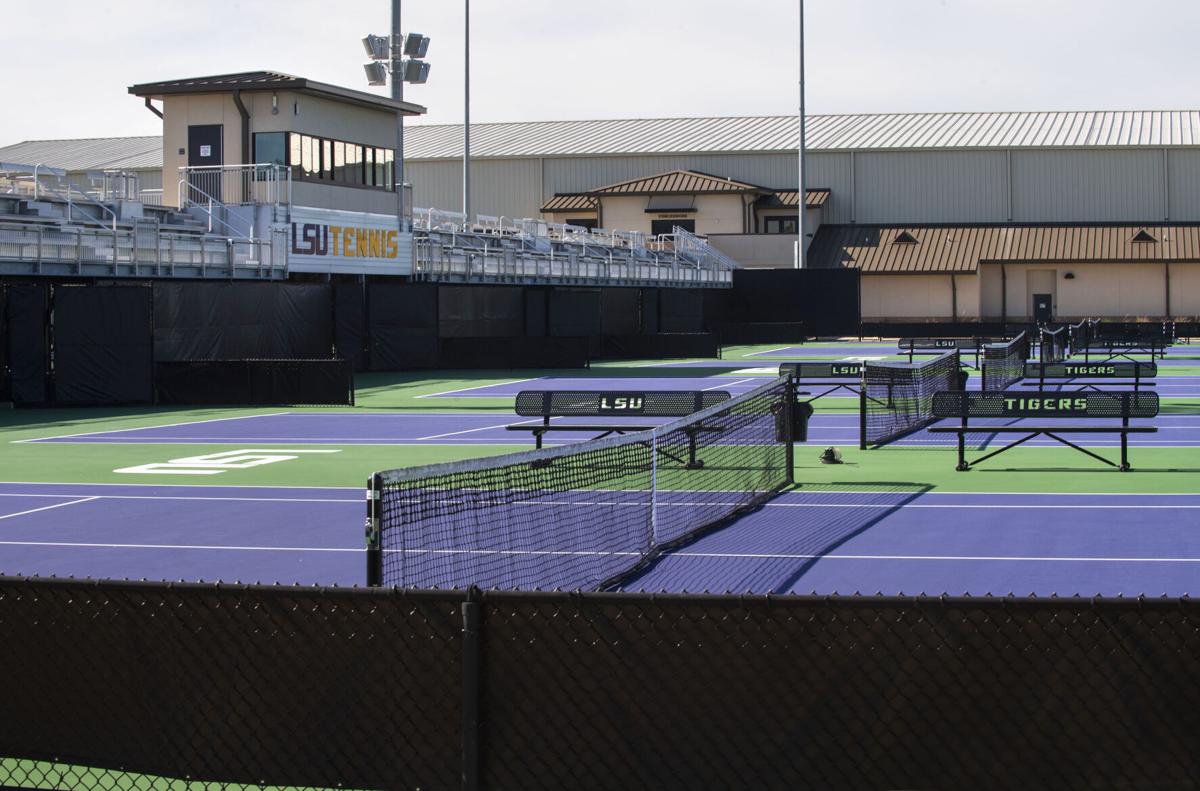 FILE - In this April 4, 2019, file photo, NCAA President Mark Emmert answers questions at a news conference at the Final Four college basketball tournament in Minneapolis. Emmert says it is “highly probably” federal legislation will pass that sets national guidelines for how college athletes can be compensated for the their names, images and likenesses. Emmert spoke Wednesday, Dec. 11, 2019, at the Learfield/IMG Intercollegiate Athletic Forum sponsored by the Sports Business Journal, in New York. (AP Photo/Matt York, File) ORG XMIT: NY185

LSU president F. King Alexander pauses for a moment of silence for LSU graduates who have died in the past year including the three graduates who died in the Bahamas helicopter accident, during LSU's Summer Commencement ceremonies Friday August 2, 2019, in Baton Rouge, La.

Two years ago, the NCAA, SEC and LSU’s president and top legal counsel were all warned that LSU’s athletics department had potentially run afoul of federal law over its handling of allegations that a football player was physically abusive toward the tennis player he was dating.

In Oct. 18, 2018 letters to the NCAA and to the SEC, David Lewis — father of former LSU tennis star Jade Lewis — told the governing bodies that LSU officials had repeatedly failed to take appropriate action after they were confronted months earlier with allegations that wide receiver Drake Davis was abusing Lewis' daughter.

Herb Vincent, the SEC’s associate commissioner for communications, sent a response on SEC letterhead dated Oct. 26, 2018. In it, Vincent acknowledged receiving the letter, along with another one sent to the NCAA.

“The letters have been forwarded to General Counsel at LSU for proper attention,” Vincent wrote. LSU’s general counsel at the time was Tom Skinner.

Vincent confirmed Wednesday that the SEC had received and “directly responded” to two separate communications that David Lewis sent in the fall of 2018. Both times, the SEC told Lewis his information was being passed along to LSU officials, Vincent said.

“LSU confirmed to the SEC that the university was conducting a Title IX investigation,” added Vincent, who previously served as an LSU senior associate athletic director and vice chancellor for university relations. “We were informed that the assault allegations had been reported to the police, and that criminal charges were pending.”

Federal Title IX laws prohibit universities and their athletic departments from discriminating against students based on gender. The rules are meant to trigger investigations into allegations of dating violence, sexual assault and other harassment.

LSU’s Title IX investigation into Davis probed whether he had broken the code of student conduct in his abuse of Jade Lewis. While former LSU President F. King Alexander and other LSU officials have cited that investigation as evidence that they acted on Lewis’ allegations, it's unclear whether they explored her father's additional claims that coaches and administrators initially turned a blind eye to the abuse.

David Lewis accused Michael and Julia Sell — LSU's tennis coaches, who are husband and wife — of failing to report those claims, along with other administrators. A Title IX investigation into Davis alone would not typically have explored that question.

Alexander, now president of Oregon State University, said through a spokesman Wednesday that he received the letter from the SEC and "acknowledged that LSU’s Title IX office had already commissioned an independent investigation into this matter" by then. But his spokesman said LSU's current administration was better fit to answer questions about the scope of the Title IX investigation.

Skinner said Wednesday that the letter from the SEC had no information LSU wasn’t already aware of. He said that his office had become aware of the violent relationship between Davis and Lewis when LSUPD was called to her apartment in June 2018, when Davis was accused of nearly strangling Lewis to death. Davis was arrested two months later.

“As soon as the office of general counsel became aware of the allegations that Drake was being abusive toward Jade Lewis, we conducted a textbook investigation involving the District Attorney’s Office, our Title IX office, LSUPD and Student Affairs,” Skinner said. “We moved Drake from campus as fast as we could and we tried to give Jade as much support as we possibly could. All we cared about at that point was making sure she was protected.”

Skinner said that the coaches and administrators whom David Lewis accused of ignoring his daughter’s abuse “were interviewed in the course of the Title IX investigation.” Skinner was also present on Sept. 10, 2018, when police interviewed a football player who reported that Davis was continuing to abuse Lewis after his first arrest. Police arrested Davis again nearly a week later.

An NCAA spokeswoman said confidentiality rules prevented her from commenting on “current, pending or potential investigations.” Mark Emmert, the CEO of the NCAA, to whom the letter was addressed, is a former chancellor of LSU.

David Lewis’ three-page letter, co-signed by his wife, Rosaria, outlined seven potential recruiting and other rule violations related to the LSU tennis team, and warned the officials about his daughter’s abuse.

“It is with tremendous distress that I report the most grievous of these violations,” he wrote. “Not only do I believe they are violations of the NCAA rules/Title IX violations but are also a complete violation of the trust that my family and I placed in LSU, the LSU Athletic Department, and in the Sells as Jade's coaches.”

The Sells did not respond to an interview request. In a statement posted on social media, since taken down, they have denied the allegations that they failed to properly handle the allegations about Davis, allegations first aired in a USA Today investigation published Nov. 16.

An arrest report says Davis punched Lewis in the stomach in May 2017 when she tried to remove some of her belongings from his home. That same month, Lewis played in the NCAA women’s tennis tournament and the NCAA singles championship tournament.

Last week started with Samantha Brennan’s image being published in newspapers across the country as she spoke out for the first time, saying L…

David Lewis wrote that he’d learned his daughter had been abused in 2017, during what was meant to be her only season on the LSU tennis team before she turned pro. Lewis wrote that he called Mike Sell “with the expectation that appropriate action would be taken, and this would be reported to Title IX.” But Sell failed to take him seriously, he wrote, and the records LSU has provided about the Davis case do not show any action being taken to report his abuse until 2018.

“As planned, Jade turned Pro in 2017,” her father wrote in his letter. “She returned to LSU in March of 2018, under the supervision of the Sells, who had full knowledge of the abusive relationship she had been in with the aforementioned LSU football player … It is our understanding that Jade sought help from someone in the athletic department, yet surprisingly, none of this was brought to the attention of the authorities or Title IX.”

Evidence suggests Davis grew more abusive in 2018. He punched Lewis so hard in April 2018 that she had fractured ribs. Later that year, he choked her until she turned purple, and threatened to kill her, according to arrest documents.

Davis even admitted some of the abuse in an April 2018 text message to LSU’s executive deputy director of athletics, Verge Ausberry, in which Davis wrote that he “hit her in the stomach.” Ausberry said he called Davis afterward and that Davis recanted. Ausberry, meanwhile, did nothing further to follow up on it afterward or to check on Lewis, which multiple experts have said was a violation of Title IX and other reporting requirements.

Lewis’ father wrote that he was shocked Davis “was allowed to remain on LSU campus subsequent to his release, under certain conditions.”

Jade Lewis also said that four of her LSU tennis teammates reported her abuse between May 2017 and August 2018 to Julia Sell, who “knew the full truth and simply chose to stand by.”

“We trusted the Sells when they recruited Jade, telling us she would be in a ‘safe, healthy, high- performance training environment’ at LSU,” David Lewis wrote. “In retrospect, I wish I had realized that the willingness of the Sells to manipulate or break rules in smaller ways, for their own selfish purposes, translated into greater violations in their willingness to cover up, rather than expose, the escalating, violent abuse of our daughter, Jade.

“The damage done to our daughter, and to us, her family, is irreparable. Additionally, our hope is that in reporting these violations, this will never happen again, to any other ‘prospective’ student.”

Davis pleaded guilty in 2019 to two counts of battery and one count of violating a protective order.

LSU has commissioned the law firm Husch Blackwell to investigate the university’s past handling of Title IX complaints, reports of sexual assault and other issues that surfaced in USA Today’s investigation. The results of that probe are expected by late February; Interim President Tom Galligan has pledged to make them public.

In the meantime, Ausberry, the Sells and others implicated in the scandals remain on LSU’s payroll.

'We are here for you': Hundreds of LSU students protest in wake of sexual assault scandals

Jade Lewis' troubles speak to all parents who send their children to LSU, columnist says

I’ve never watched LSU tennis — I’m not sure where on campus the team plays — and I have barely passed through Tiger Stadium’s gates.