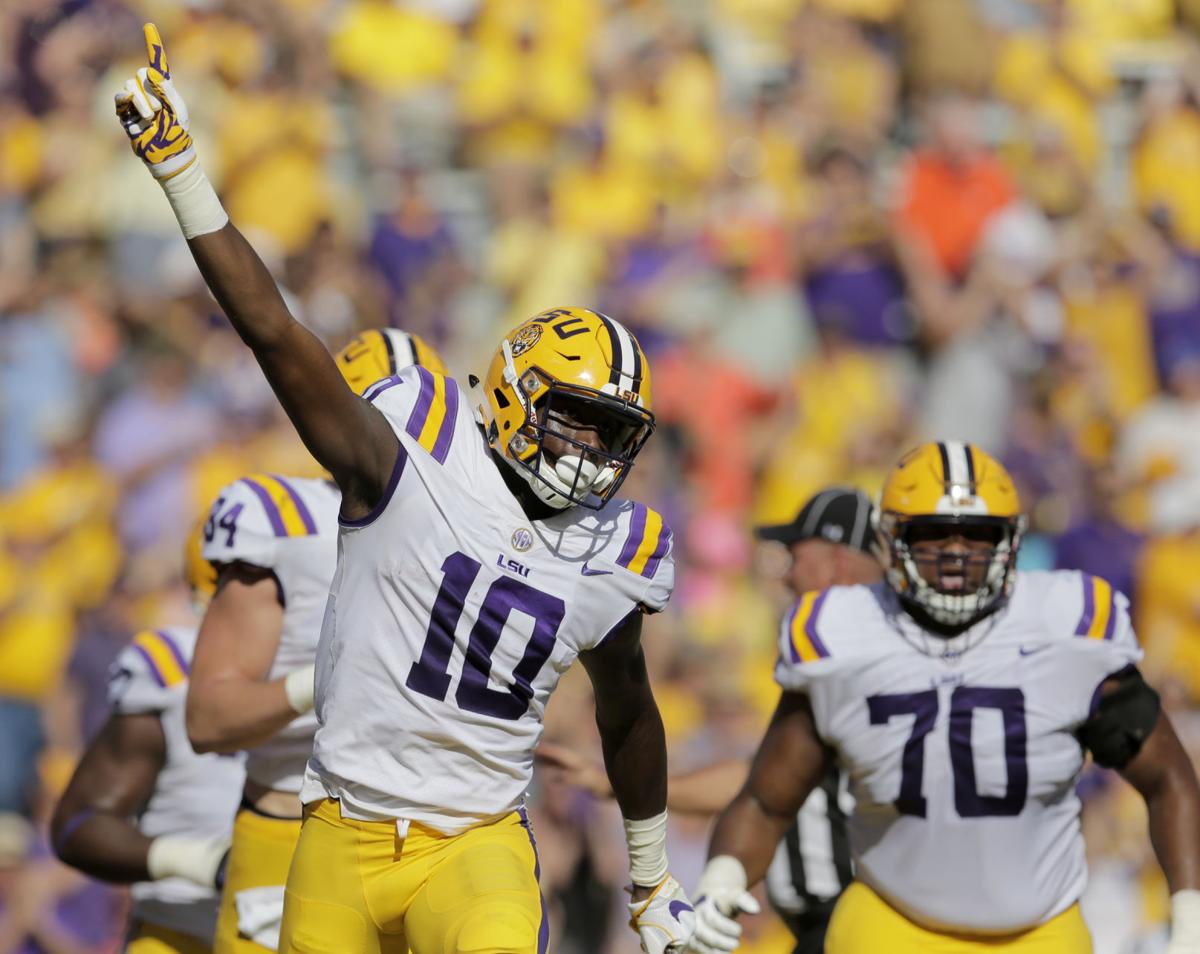 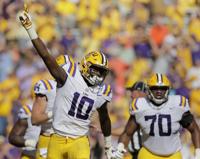 LSU Tigers wide receiver Stephen Sullivan (10) celebrates a touchdown during first half action against the Auburn Tigers in Baton Rouge on Saturday, October 14, 2017. (Photo by Brett Duke, Nola.com | The Times-Picayune) 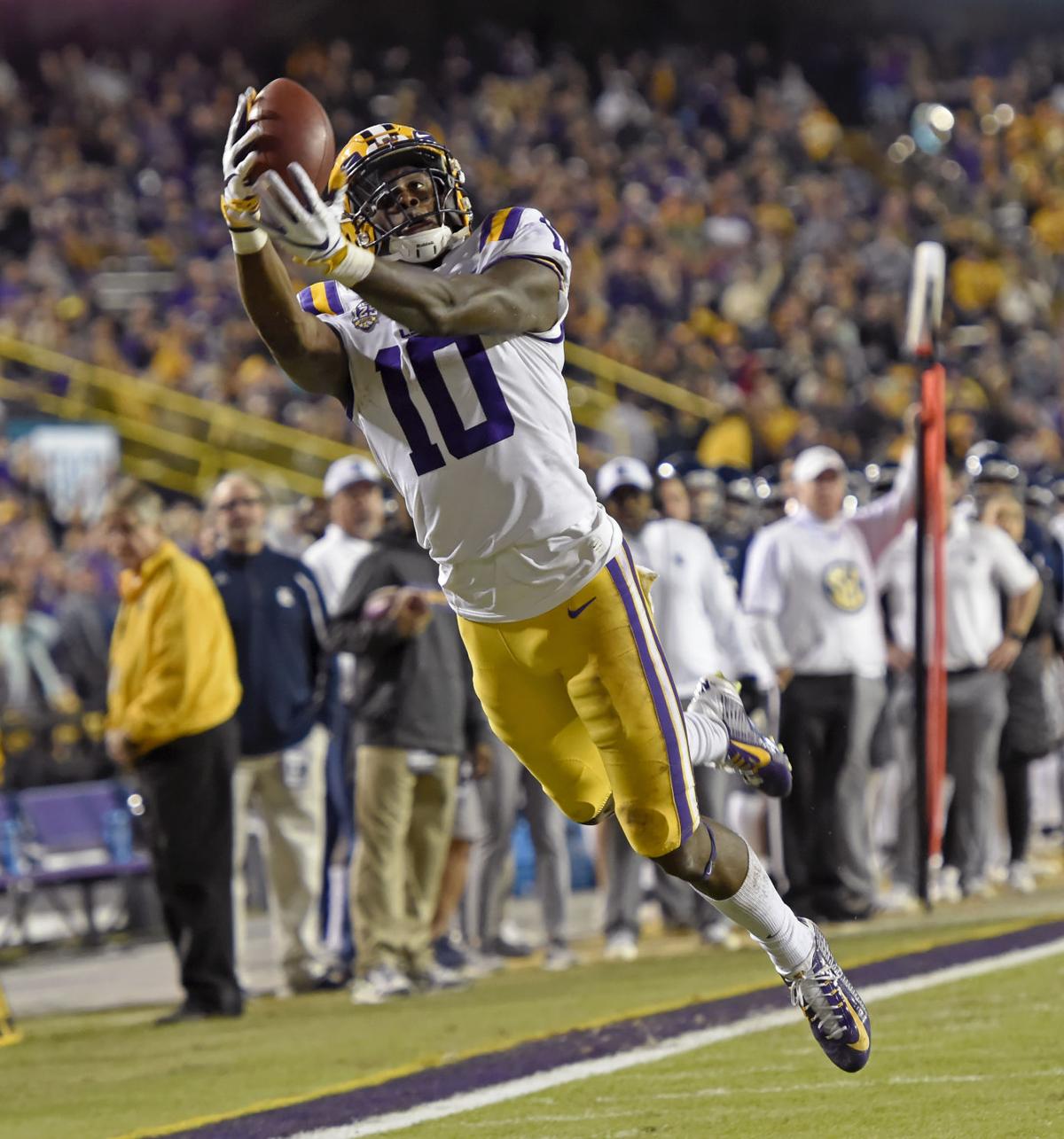 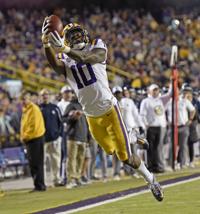 LSU wide receiver Stephen Sullivan (10) makes a dive grab at the ball in the end zone but can't hold on during the first half of LSU's football game against Rice in Tiger Stadium Saturday Saturday Nov. 17, 2018, in Baton Rouge, La. 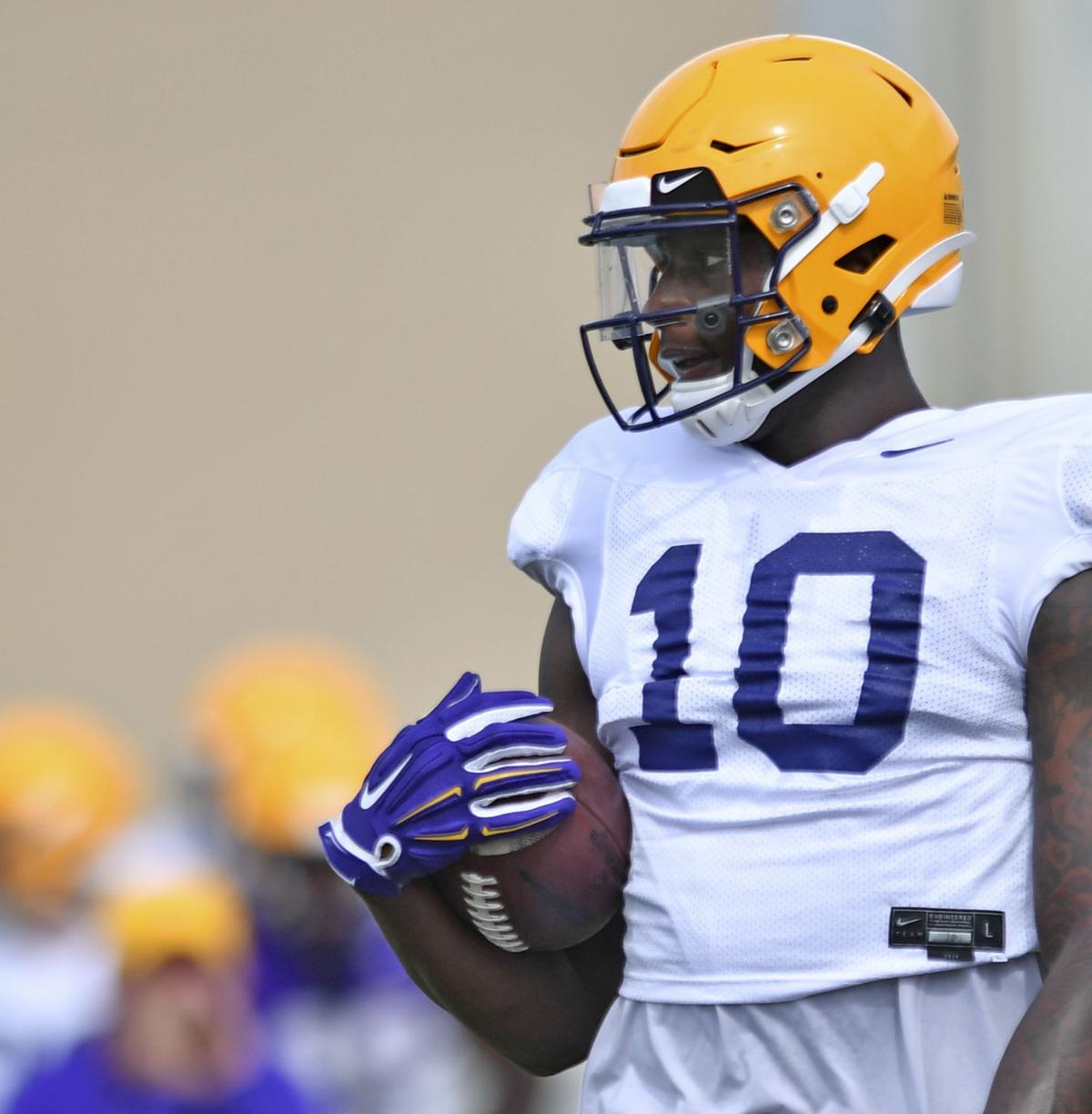 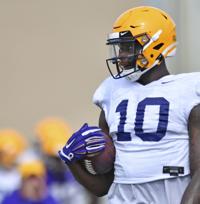 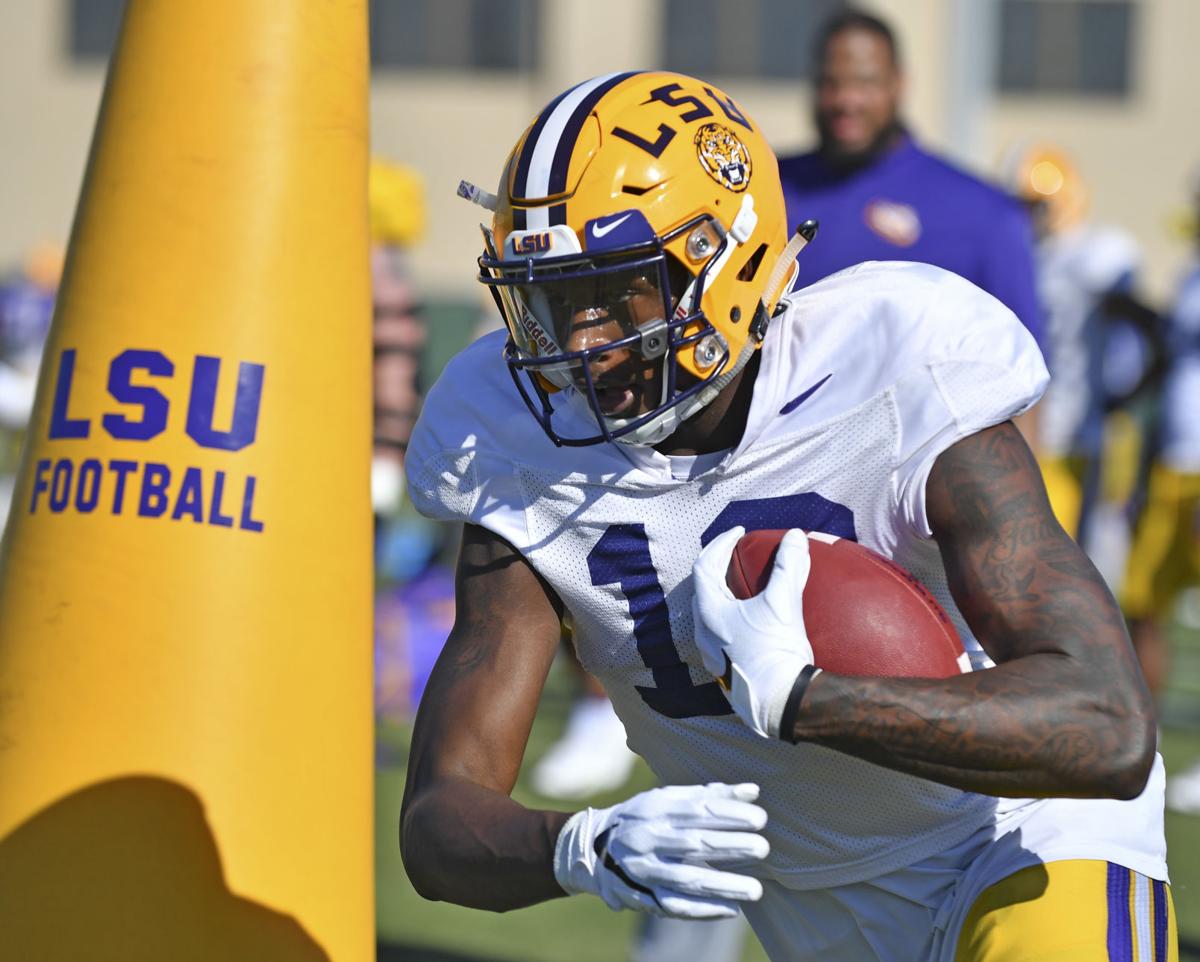 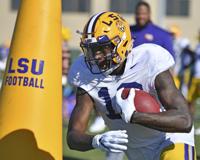 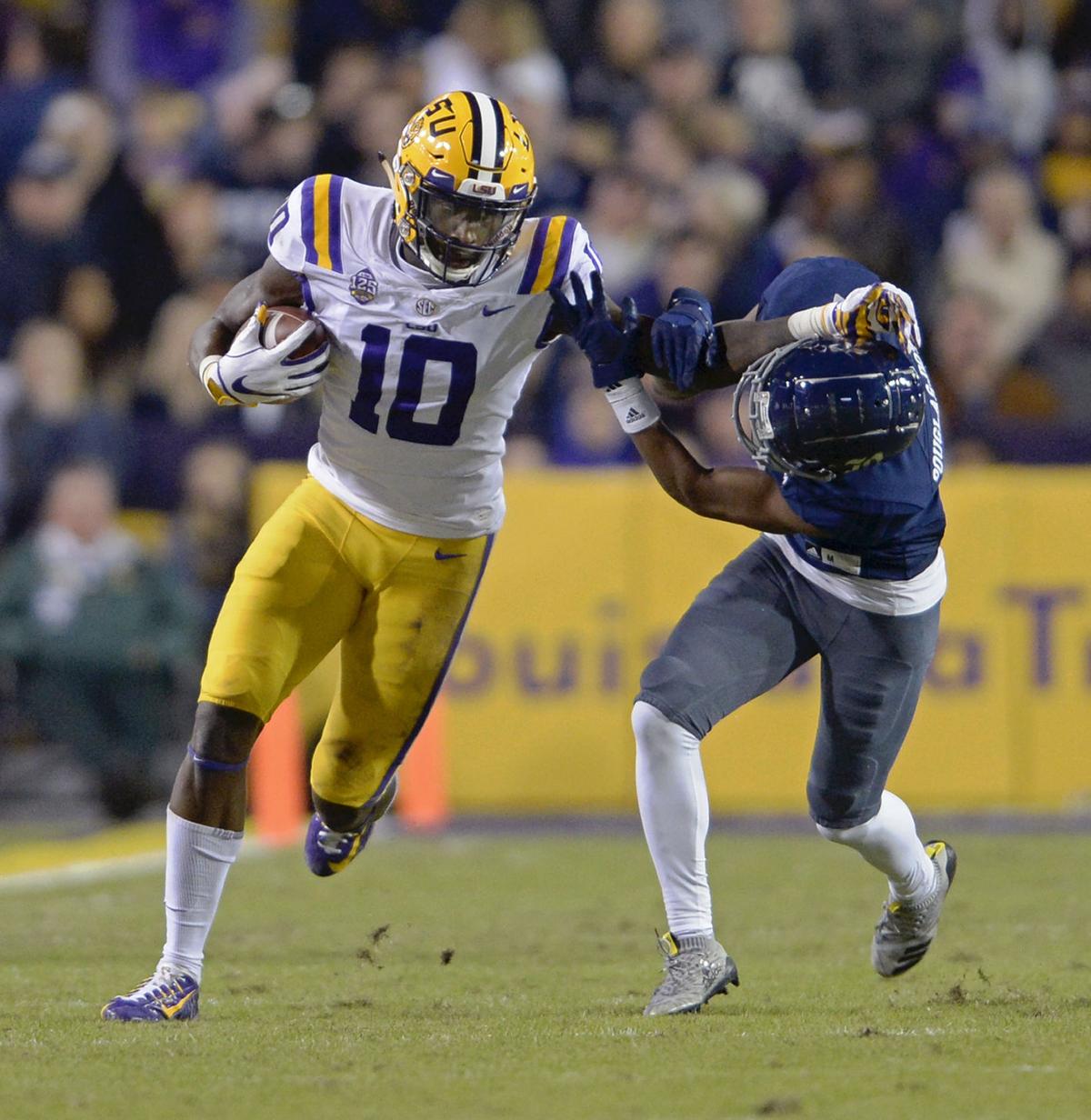 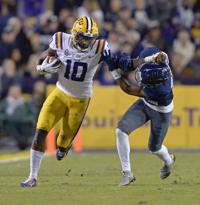 LSU Tigers wide receiver Stephen Sullivan (10) celebrates a touchdown during first half action against the Auburn Tigers in Baton Rouge on Saturday, October 14, 2017. (Photo by Brett Duke, Nola.com | The Times-Picayune)

Stephen Sullivan huddled under a highway bridge in Irving, Texas. He was 10 years old, maybe 11, with nowhere to go. Cars thumped overhead. He tried to sleep.

Sullivan had lived in a nearby hotel, but he and his older brother were kicked out when police arrested his parents. They found shelter together underneath the bridge. School had just started. They skipped class the next day.

Sullivan had always lived in poverty. Neither of his parents graduated from high school. They struggled to support four boys. Sullivan bounced between Texas and Louisiana. He felt embarrassed when the school bus picked him up from the hotel.

With his parents incarcerated, Sullivan slept below the bridge for a few nights until his little league football coach, A.D. Jenkins, picked him up from a gym. Sullivan hadn’t bathed. Jenkins didn’t know if he had eaten.

“I don't really try to remind myself of what I went through,” Sullivan said. “I try to block it out. Me telling people and me talking about it, it still hurts a little bit.”

LSU's 2020 SEC football schedule has been announced; Take a look at next year's dates, opponents

The Southeastern Conference announced its full 2020 football schedules on Wednesday afternoon, and LSU will be hosting its first conference ga…

Last Sunday, Sullivan shared his story at a media session in the midst of LSU's preseason camp, revealing details about his life he hadn't told most of his friends, much less the public. The family he lived with in high school didn’t know, until recently, he once slept under a bridge.

Sullivan spoke because, two days earlier, he graduated from LSU. As he walked across the stage, the first person in his family to receive a college degree, Sullivan thought about his life. The bridge. The nights he didn’t eat. The constant struggle to find clothes.

Sullivan, a former wide receiver who moved to tight end in the Tigers’ new offense, had changed his life. He wanted to inspire people in a similar situation.

Sullivan ran barefoot through a gym. Taller and more athletic than everybody else, he caught Jenkins’ attention. Jenkins, founder of B.I.G. D.O.G.S. Youth Organization, asked Sullivan his age. He said 8 years old.

Jenkins coached a football team at that age group. He asked Sullivan where he lived, and Sullivan pointed toward an apartment complex across the street. Jenkins knew the building. He knew what it meant about Sullivan’s life.

“Can you take me to your parents?” Jenkins asked.

Sullivan said OK, and he ran down the street.

“I was going to give him a ride,” said Jenkins, who followed in his car.

At the apartment, Jenkins introduced himself to Sullivan’s parents. He told them about the football team. They worried about money and transportation. Jenkins, a software engineer at IBM and now the President of the Irving ISD Board of Trustees, said he’d handle both.

Sullivan instantly became the team’s best player. Jenkins picked up Sullivan before practice and dropped him off at night. When he noticed the lights off, Jenkins asked Sullivan if he wanted to stay with his family instead. Sometimes he bought Sullivan pizza because he knew, without asking, the boy needed food.

“Growing up,” Sullivan said, “I didn't have nobody to look up to.”

Sullivan moved out of his parents’ house in middle school. He thought he needed to separate himself. He stayed with family or friends or coaches, moving into Jenkins’ home for long stretches of time. He became friends with his coach’s sons. Jenkins checked his homework. Some semblance of stability entered Sullivan’s life.

Then, the summer before his freshman year at Nimitz High School, Sullivan visited family in Donaldsonville for a few weeks. When Jenkins asked if he wanted to come back, Sullivan said no.

“He went back to what he knew best,” Jenkins said. “The freedom to come and go as he wants to and make decisions on his own, whether they're right or wrong.”

'Speed in space'; How LSU is using its running backs like New Orleans Saints' Alvin Kamara

LSU running back Clyde Edwards-Helaire lined up in the slot during an individual drill at preseason practice, and when he took off at the snap…

Sullivan walked through the library the first week of his sophomore year at Donaldsonville High School. The librarian, a woman named Michele Macloud, recognized the teenager. How could she not? Inching toward 6-foot-6, he stood taller than everybody.

“Hey Sullivan,” Macloud said, “your brother owes me a MacBook.”

The year before, Sullivan’s older brother had received a computer through a technology exchange program. He didn’t come back to school, so he didn’t return the laptop.

Sullivan returned the computer the next day. Macloud thought a lot of people would have left it at home. Others might have sold it. But Sullivan brought it back.

As Sullivan’s sophomore year continued, he wandered through the library between classes and on bathroom breaks. Macloud treated him like a son, reminding him of his class schedule and his grades. The library was close to the lunchroom, and eventually, Sullivan ate his food at the library counter.

“If I was going to be a part of his life,” Macloud said, “I had to be willing to never let him down.”

Sullivan struggled in school. Moving so much, he never learned how to study. He didn’t consider college until his sophomore year, when Macloud pushed him and LSU offered him a football scholarship. He didn’t aim for perfect scores, but with Macloud’s encouragement, he tried to complete all his work.

Sullivan lived with family his first two years at Donaldsonville. He did not have a legal guardian in Louisiana. He did not have health insurance. An aunt provided him a room, but she didn’t live in the same house. Sullivan occasionally asked Jenkins for money. Sometimes, he stayed with Macloud’s family. She gave him food and clothes.

One day the summer before Sullivan’s junior year, Claudine Brown came home from work. She knew Sullivan, and she found him hanging out with her son, Tyler.

“Can I stay here?” Sullivan asked.

“What you mean can you stay here?” Brown said. “You're not staying with your aunt anymore?”

“I can't go back there,” Sullivan said.

Sullivan lived with Brown and her family the rest of high school. He shared a room with Tyler. His legs stuck over the bed. But he had a home.

Over time, Sullivan shared details of his life with Brown. A gun incident. An uncle who sold drugs. Going to sleep without eating dinner. He never pouted about it. He just lived.

Sullivan graduated early his senior year. He enrolled at LSU for the spring semester. He worked out inside expensive facilities. The school provided clothes, an apartment and stipend money. He bought Nike and Air Jordan shoes. He felt rich.

Jake Riedel noticed a backpack on the floor of the weight room.

School never became easy for Sullivan. He rushed to graduate this summer, instead of waiting until December, and Macloud asked why he pushed to finish early. Who was it for?

Graduation hinged on his summer exams, but Sullivan earned his diploma. On Aug. 2, Macloud picked up Sullivan from his apartment. She wanted to bring him to the ceremony.

Sullivan smiled throughout the day. He had called coach Ed Orgeron the night before, and he asked to miss practice — LSU’s first of the preseason — after graduation. He wanted to celebrate with his family. Orgeron said OK.

Sullivan’s leg bounced throughout the ceremony. He graduated with a degree in interdisciplinary studies, and a crowd of people screamed his name as he walked across the stage draped in a purple gown.

Macloud sat in the stands with her family. Brown did, too. Aunts came with cousins, coaches, friends and one of Sullivan’s grandfathers. Two brothers drove from Dallas. So did Sullivan’s parents. He paid for their hotel room.

Sullivan hadn’t seen his parents in a couple months. He still doesn’t know why they were arrested. He doesn’t have a close relationship with them, but he hopes to make it stronger. He wrapped his arms around them last Friday, and his mother smiled.

After graduation, Sullivan went to Mike Andersons for lunch with his family and friends. He ate a cajun pasta, and as he looked around the table, he repeated a phrase.

“I can't believe this,” Sullivan said.

For so much of his life, Sullivan struggled to find stability in a home. Until he attended Donaldsonville, he never spent four years in the same place. He lived in poverty. Eventually, he found prosperity.

And graduation? He holds that above anything he has accomplished on the field.

“The most important day of my life,” Sullivan said. “So far.”

Rabalais: After years away from the game, LSU tight end Thaddeus Moss is ready to go

Thaddeus Moss isn’t like everyone else involved with LSU football, counting down the days until the Tigers’ Aug. 31 season opener against Geor…

LSU's Saahdiq Charles, latecomer to left tackle, is prepared for a breakout season

Ed Orgeron called his 20-year-old offensive tackle into his office and flipped on the film.