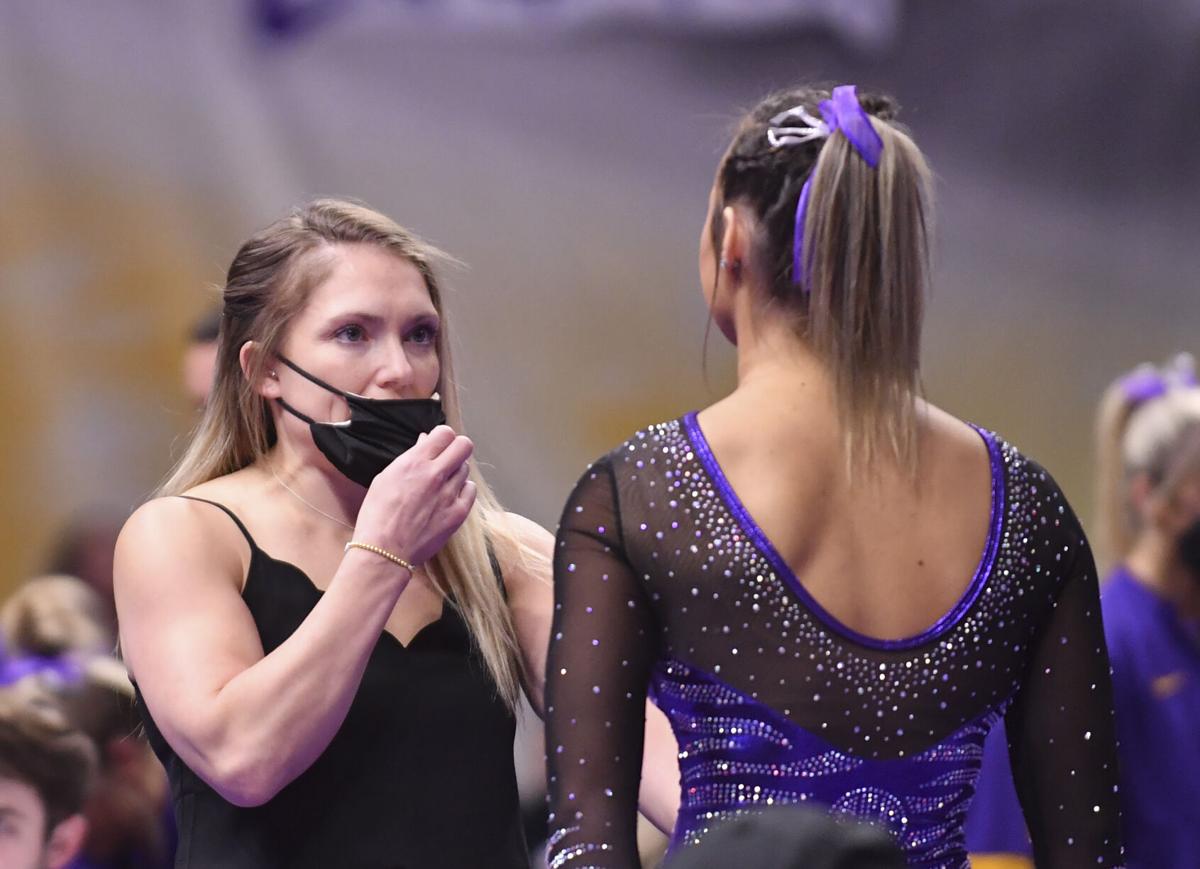 LSU volunteer coach Courtney McCool Griffeth, left, speaks to Tigers junior Alyona Shchennikova before she performs her floor routine against Centenary, Friday, January 7, 2022, at the Pete Maravich Assembly Center. Shchennikova got a 9.725 on the event. 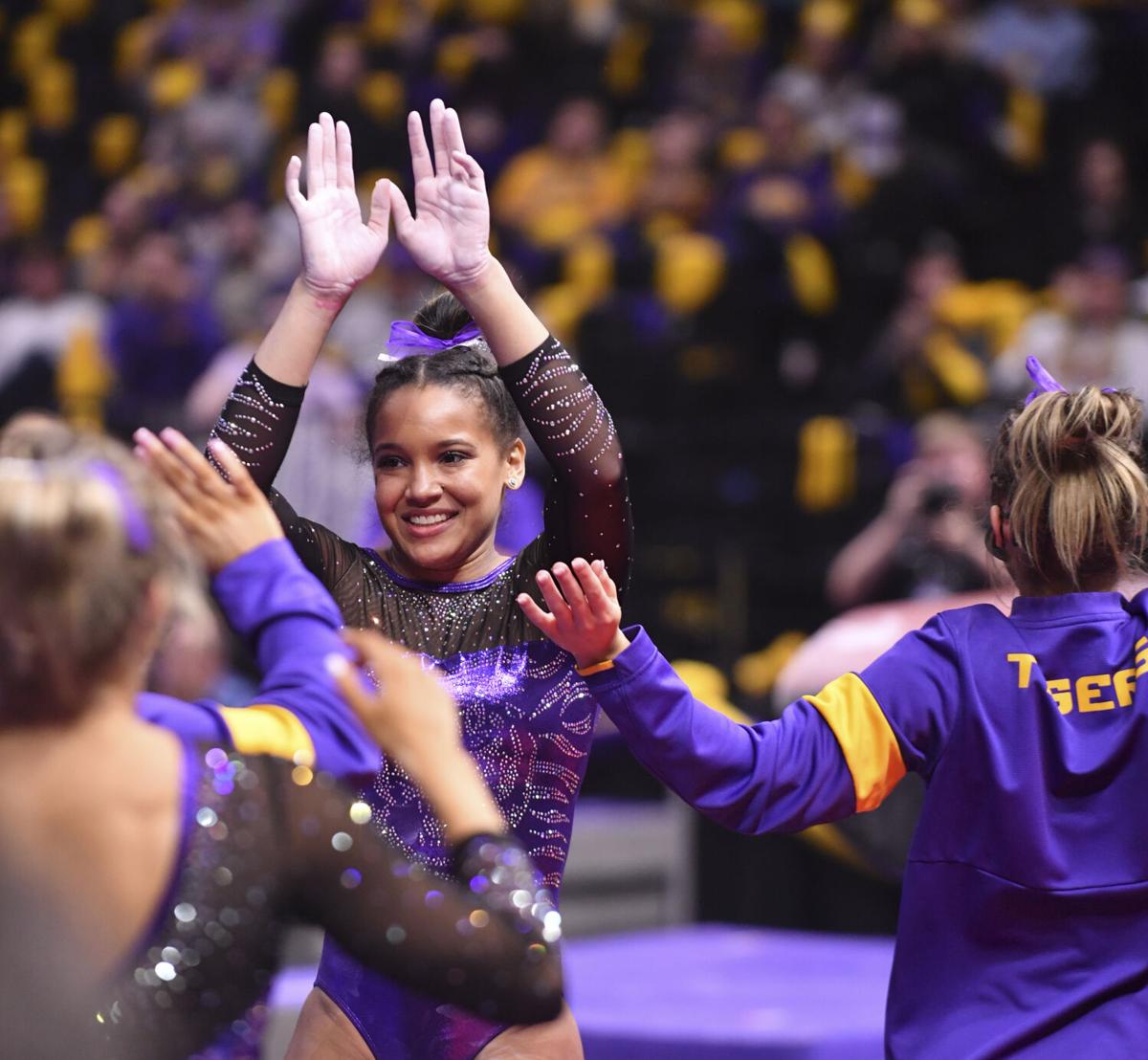 LSU sophomore Haleigh Bryant after competing on vault against Centenary, Friday, January 7, 2022 in the Pete Maravich Assembly Center. She won the event with a score of 9.925. 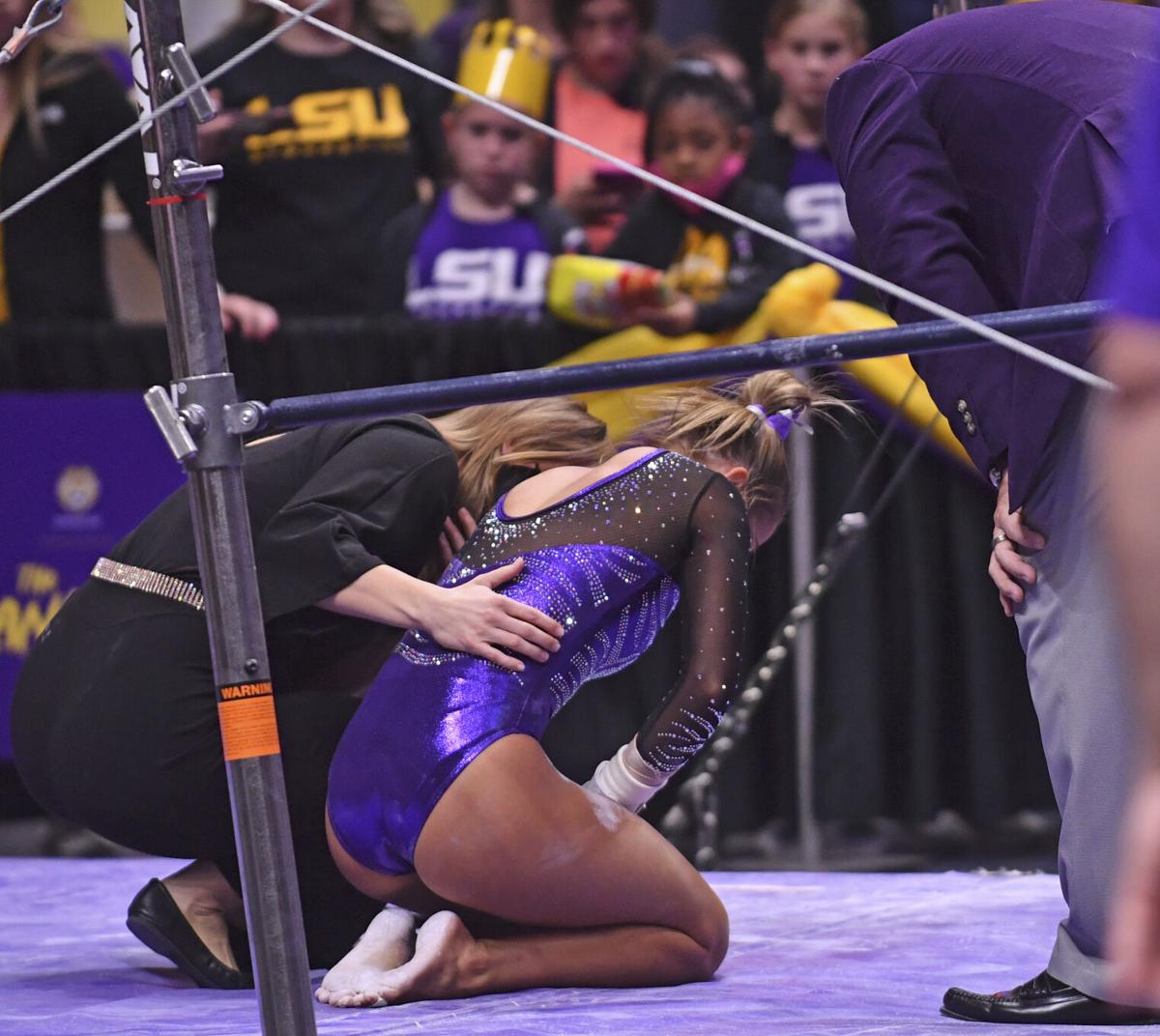 LSU volunteer coach Courtney McCool Griffeth, left, speaks to Tigers junior Alyona Shchennikova before she performs her floor routine against Centenary, Friday, January 7, 2022, at the Pete Maravich Assembly Center. Shchennikova got a 9.725 on the event.

LSU sophomore Haleigh Bryant after competing on vault against Centenary, Friday, January 7, 2022 in the Pete Maravich Assembly Center. She won the event with a score of 9.925.

The recent coronavirus surge has had a major effect on the LSU gymnastics season so far.

First the Tigers had to scramble to bring in Centenary as an opponent Friday when West Virginia had to pull out of the season opener because of COVID-19 protocols. Now it’s LSU’s team that has been affected, with the Southeastern Conference announcing Wednesday that LSU’s meet Friday at Missouri has been postponed because of “COVID issues within the LSU gymnastics program.”

LSU coach Jay Clark said his 20-person team was down to eight or nine available gymnasts for this weekend because of positive tests, contact tracing, injuries and a few who felt sick after getting their second or third vaccine shots. He said most of the team had not trained since LSU’s 196.950-186.550 win over Centenary.

“Every day something started happening,” Clark said. “It snowballed on us.

“I think we’re probably out of the woods over the weekend. It just wouldn’t have been in time to compete.”

The meet between No. 6 LSU and No. 7 Missouri is expected to be rescheduled. Clark said he has spoken to Missouri’s coaches twice about rescheduling and are getting close to finding a new date resulting in a Friday-Sunday competition weekend.

LSU’s next meet, at home Jan. 21 against No. 15 Arkansas, is expected to go off as scheduled.

“I’m pretty confident we’ll have our full complement next week other than Haleigh (Bryant),” he said.

The sophomore All-American and 2021 NCAA vault champion suffered what LSU’s medical staff believes is a partially torn plantar fascia in her foot. The plantar fascia is a long, thin ligament that connects the front of the foot to the heel and supports the arch.

“She was warming up on floor and when she pushed off to run she felt it pop,” Clark said.

Bryant had an MRI on Tuesday but as of Wednesday afternoon LSU was still waiting on the results.

Despite the injury, Clark is hopeful Bryant can compete on uneven bars against Arkansas and could return as an all-arounder in several weeks.

“It’s not anything long term that structurally is going to hurt her,” he said. “It’s a matter of whether it’s painful or not, as long as it’s not swelling.

Senior All-American Sami Durante also suffered an injury against Centenary, straining or spraining muscles in her forearm as she competed on bars. Clark said the injury was painful but not serious, and he is optimistic she can compete against Arkansas.

“Her hand locked up and she couldn’t open it,” he said. “We thought she tore tendons in there. After Sunday she was kind of back to normal, just sore. We let her vault and do beam where she wasn’t having to grip. That went well (Monday).”

Clark said about 83% of his team has had two COVID-19 shots, but a lesser percentage than that has had a booster. He said if there is a silver lining to the situation it is that the Tigers have a chance to make it through the rest of the season without being subject to more protocols.

Sami Durante’s first time on bars in 2022 was going well. She got vertical on the high bar and made a smooth transition to the lower one.