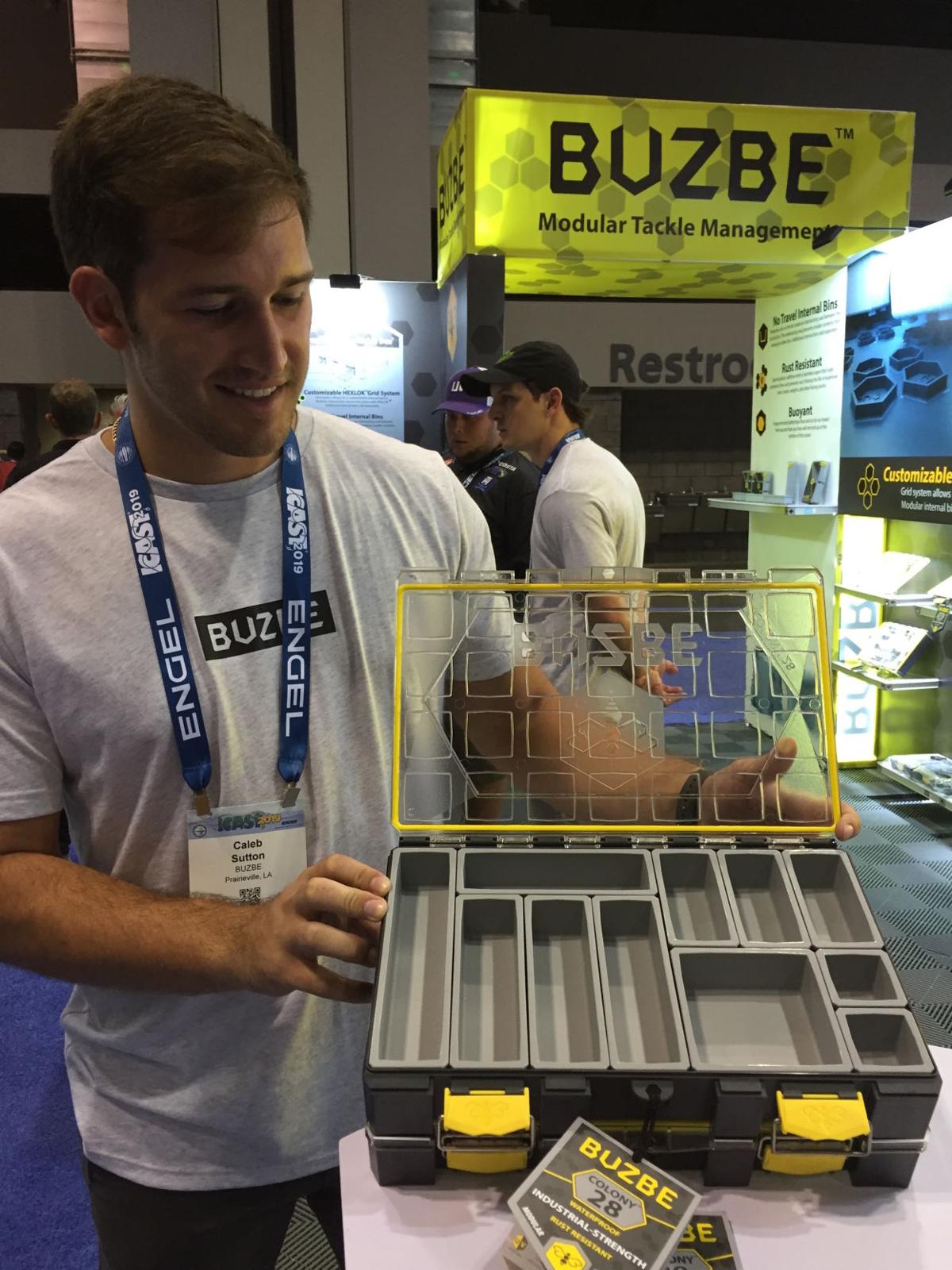 Caleb Sutton worked for months at his Prairieville home to come up with Buzbe, a tackle storage system he unveiled at this years ICAST fishing tackle trade show. 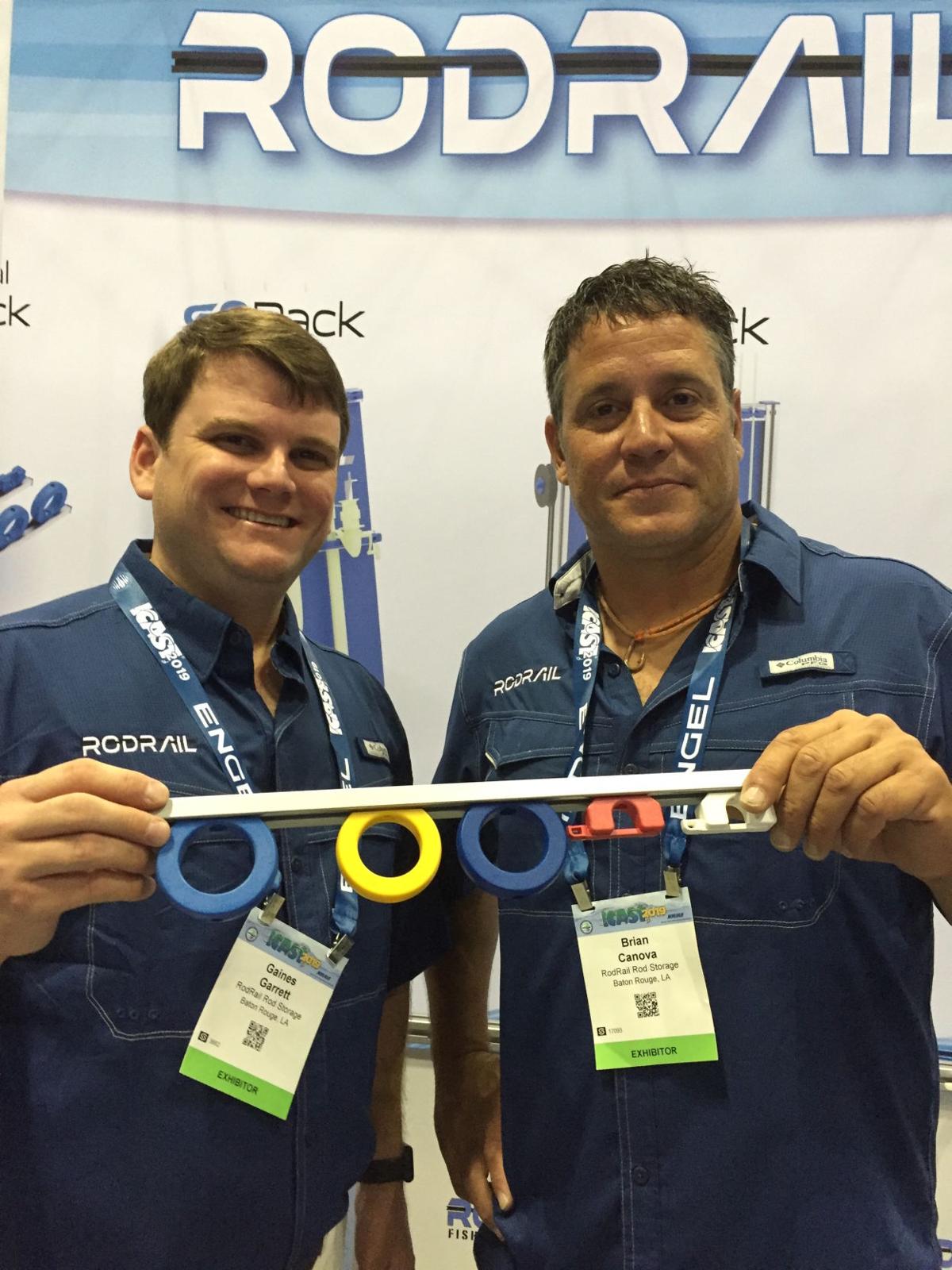 Caleb Sutton worked for months at his Prairieville home to come up with Buzbe, a tackle storage system he unveiled at this years ICAST fishing tackle trade show.

Ah, Christmas, that most wonderful time of the year.

Ah, but nearly six months ago, at the American Sportfishing Association’s ICAST — the country largest tackle show — this “show,” if you’re a fisherman, is, well, the second most wonderful time of the year.

There’s a section set aside in the Orange County (Florida) Convention Center named “New Products Showcase” which unveils any of the next year’s brand-spanking marvels are on display.

(If truth be known, like most new fishing “things” more of these new things are designed to catch fishermen better than they can catch fish.)

Yet there are some unique items among this cast of thousands that catch the eye, and, this year, two introductions came from the Baton Rouge area, and both warrant a good look-see when it comes for shopping for your favorite angler.

Buzbe started a couple of Christmases ago when Caleb Sutton’s girlfriend asked him for an idea about an under-the-tree present.

“I told her tackle trays, and I got a couple,” the young Prairieville fisherman said. “I looked at them and said is this all there is, and, apparently there was.”

So, he went to work, and, in July, he showed a product that turned buyers’ heads.

It’s difficult to hold this product’s attributes to one paragraph, but here goes: what separates Sutton’s Buzbe trays from the rest is its modular configuration with any of five different smaller boxes that fit inside the tray — they plug in similar to playing with Legos. These small boxes ensure nothing slips out underneath, and a modular configuration on the lid ensures nothing (not hooks, sinkers, swivels, etc.) escapes over the top of the boxes into another modular box.

Each box comes with a standard configuration, but additional boxes are available to tailor each box to an angler’s wishes.

That’s not all: Sutton assures each military-grade plastic box is rust resistant, that the lid’s plastic has a built-in sun protection element with sturdy latches and a rubber ring that seals out water and humidity. You can stack the boxes.

“It works like a (tackle) system,” Sutton said. “There are so many options, and you can customize each box to, say, hold worms, or hard plastic lures, or hooks — anything.”

Connor Ferrara, Sutton’s right-hand man, said the Buzbe system ($39.95) is available at Superior Bait & Tackle, Bowie Outfitters, Spillway Sportsman and Ascension Living in the Baton Rouge area, and, in the New Orleans area, at Puglia’s, Shag’s, Professional and Metro Boating. He said they’re looking for outlets in the Acadiana area, and have feelers from a couple of national chains.

The boxes are available online: buzbe.com.

This built-to-last-a-lifetime rod storage system debuted as “RodRail” at ICAST, but a marketing move since changed the name to Raximus Performance Fishing Rod Racks.

It’s the brainchild of Brian Canova, who’s teamed with Gaines Garrett and Marc Couvillion to push several products into the fishing market.

Leading off with “Rod Rack ($39.95),” a fixed wall-mount, the line’s headliner is “Go Rack ($119.95),” an all-in-one, detachable, wall-mounted rack with a kick stand that allows a fisherman to carry five rods — two additional keeper clips and loops can be added to the rails — from storage to vehicle to boat and back again without the usual chore of tangled lines and possible damage to rods and reels. Neoprene ($9.99) and woven ($6.99) rod sleeves have been added recently.

Back in July, Canova was eager to show the sturdy clips and loops.

“These things should never wear out,” he said. “We built them to last and to keep rods in place.”

Without boasting — and because there is nothing like it on the market — Canova said a fishermen could pass these on to a next generation of fishermen.

It was that reason this crew decided to heed the advice of the marketing firm that put Yeti coolers where that company is today.

“They saw us as a product with a lot of competition, but no one brand name stuck out,” Couvillion said. “What they saw in us was a premium product they could bring to the market, where these products traditionally work their way to the bottom in terms of trying to make a product the cheapest way possible.

“Raximus, the name, made it stand out in the market.”

Gaines said the name change and a different marketing strategy paid off immediately.

“Two weeks after the relaunch of these products, our online sales doubled,” he said. “Now we’re rocking and rolling.”

Raximus’ Rod Racks and Go Racks are available at Superior Bait, Bowie’s and The Backpacker in Baton Rouge, and online: raximusoutdoors.com.

After seeing the lines of guys at the return/exchange window many years ago, there’s something to pass on to gift-givers.

If they want a Lew’s, Shimano or Revo reel, then you’re talking about a gift that should last a lifetime (I have reels 50 years old). Fishing rods, too. Each brand has model numbers for each product, so find the model number. These are pricey items and should be regarded as such.

Same goes for hunting gear, whether they be outerwear, gloves, shirts, pants, even socks. It does little good to buy a $20 pair of wool socks (yes, they’re warm) when your outdoors person might be allergic to certain wools (yes, that’s happened).

If shoes or boots are on the list, then get a gift card to a place with a wide selection. Pick out a price range and you’re done. Not all boots fit the same, even the same style of boot from the same maker can feel different to the wearer. Let them pick, not you.

This is true for so many other hunting and fishing items, things like fishing line and hooks.

And, there always are gift cards.