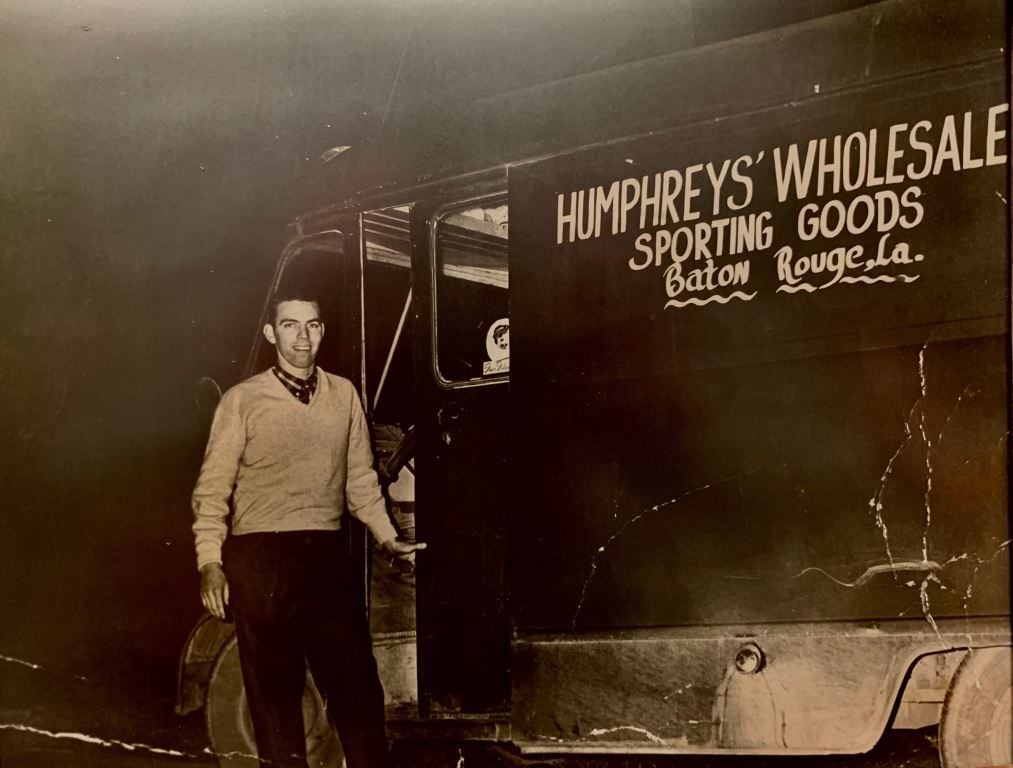 Bill Humphries stands next to a used bread delivery truck he converted to carry fishing tackle to customers in the late 1950. The Bill Humphreys Wholesale became H&H lures, which celebrated its 60th year in 2019. 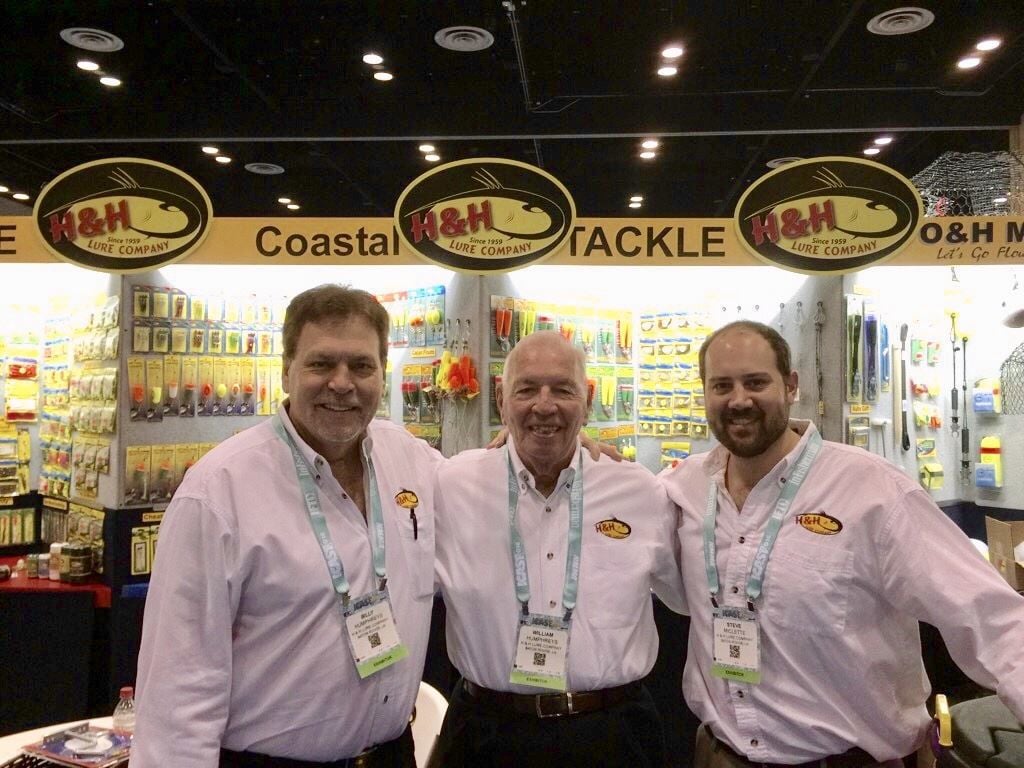 The three generations of Humphreys standing in front of their booth at the 2018 ICAST Show: son Billy Jr., left, grandfather and father Bill, center, and grandson Stephen Miclette. Their Baton Rouge-based fishing equipment, and now hunting equipment, business has more than 25,000 products.

Bill Humphries stands next to a used bread delivery truck he converted to carry fishing tackle to customers in the late 1950. The Bill Humphreys Wholesale became H&H lures, which celebrated its 60th year in 2019.

The three generations of Humphreys standing in front of their booth at the 2018 ICAST Show: son Billy Jr., left, grandfather and father Bill, center, and grandson Stephen Miclette. Their Baton Rouge-based fishing equipment, and now hunting equipment, business has more than 25,000 products.

Tens of thousands of fishermen — make that hundreds of thousands — don’t know it, but they’ve been members of Bill and Tommy Humphreys family for a long time.

Maybe not, but fishermen do.

Just last week, 82-year-old Bill sat in his modest office off South Choctaw Drive in Baton Rouge remembering the day he had a stake of $4,000 and invested in a used Holsum Bread truck to make calls throughout Louisiana and parts of Mississippi and Texas.

He was selling more than spinnerbaits then, but the old single- and double-bladed H&H spinnerbaits were his top seller.

Today, on the verge of heading to Orlando, Florida, for this week’s annual ICAST Show — the largest fishing and fishing-related trade show in the country — Bill, now 82, remembered those early days, and the seven-day-a-week business it was and still is in 2019.

“It was 14 or 15 hours a day on the road and when I wasn’t in the truck, we were at home making sure we had the orders filled and all the paperwork done,” Bill said.

“No, it wasn’t easy, but we came up at a time when working hard was part of it,” Bill said glancing at son Billy Jr. sitting beside him.

Billy Jr. handles most of the heavy lifting these days. Once a company that relied on making products at its Baton Rouge location, federal regulations forced them to move their manufacturing operations offshore, first to Honduras, where Bill said he made lasting friendships, and now to China.

H&H wasn’t alone in making those moves. While it’s difficult to estimate how much fishing tackle and other equipment — along with hunting and other outdoors equipment — comes from overseas manufacturers, it’s safe to say it’s upwards of 70 percent, and includes everything from rods, reels, soft-plastic lures and most anything made from soft metals.

OK, so most every freshwater fisherman in south Louisiana knows about H&H spinnerbaits, and the decades-long run of marsh and saltwater catches on soft-plastic H&H Cocahoe Minnows and Sparkle Beetles, but there's much more to H&H Lures than those products.

Lots more. From the early days of supplying affordable spinnerbaits and terminal tackle, Bill said the company has a little more than 25,000 SKUs — “stock keeping units,” those machine-read black bars located on almost everything we buy these days.

And there’s more than H&H. Billy Jr. said the local company supplies all or parts of fishing and hunting items under 20 other names, some of which you find in those big-box outdoors stores spread out across the country and in regional markets.

Bill made it clear all the work has provided a comfortable living for the Humphreys and their family — daughter Tommie Maranto mans the office, too — and a third generation, grandson Stephen Miclette, has stepped in and is learning the business from the ground up.

It hasn’t been easy. Besides the long hours and the fishing trips Bill and Billy Jr. have had to skip, along with a very occasional vacation, there was “the flood.”

The past 35 months have been a struggle, but, as usual, the Humphreys went to work and turned lemons into lemonade.

Billy Jr. just smiled: “We lost $6 million in inventory … had trucks rolling out of here for days with items we couldn’t salvage … lost forklifts, not to mention the flood damage to offices and warehouses, and it was a challenge to get products.

“When we were in Houduras, it was a short (supply) time, but, it’s six months from China, and we knew if there were pegs in (tackle) stores that went empty the pegs would be filled with something else. It was a challenge.”

All that said, the Humphreys will see old friends at ICAST this week, and, as usual, probably make new ones.

Neither Bill nor Billy are name-droppers, but there are stories about ardent freshwater angler Bobby Knight (yeah, he was a basketball coach, too) making special trips to Baton Rouge to pick up a couple dozen spinnerbaits. There are others, too, but the story would get too long.

“I think everyone knows we have good products under the H&H brand,” Billy Jr. said at ICAST the July before the disastrous flood. “We’ve come out with new lures over the years, and know we’re building on a solid foundation. People still use the old spinnerbaits, and we have too many more than we can count fishermen who rely on the Cocahoe Minnow to catch trout and redfish.

“It’s just become so much more these days,” he said.

Bill Humphreys still goes to the office almost every day and remembers the day his business expanded from spinnerbaits to other products. The old big-box stores — Howard Brothers, Gibson, Western Auto and White stores back then — had trouble getting hooks and sinkers, and, “I told them I could help with that … and (business) took off.