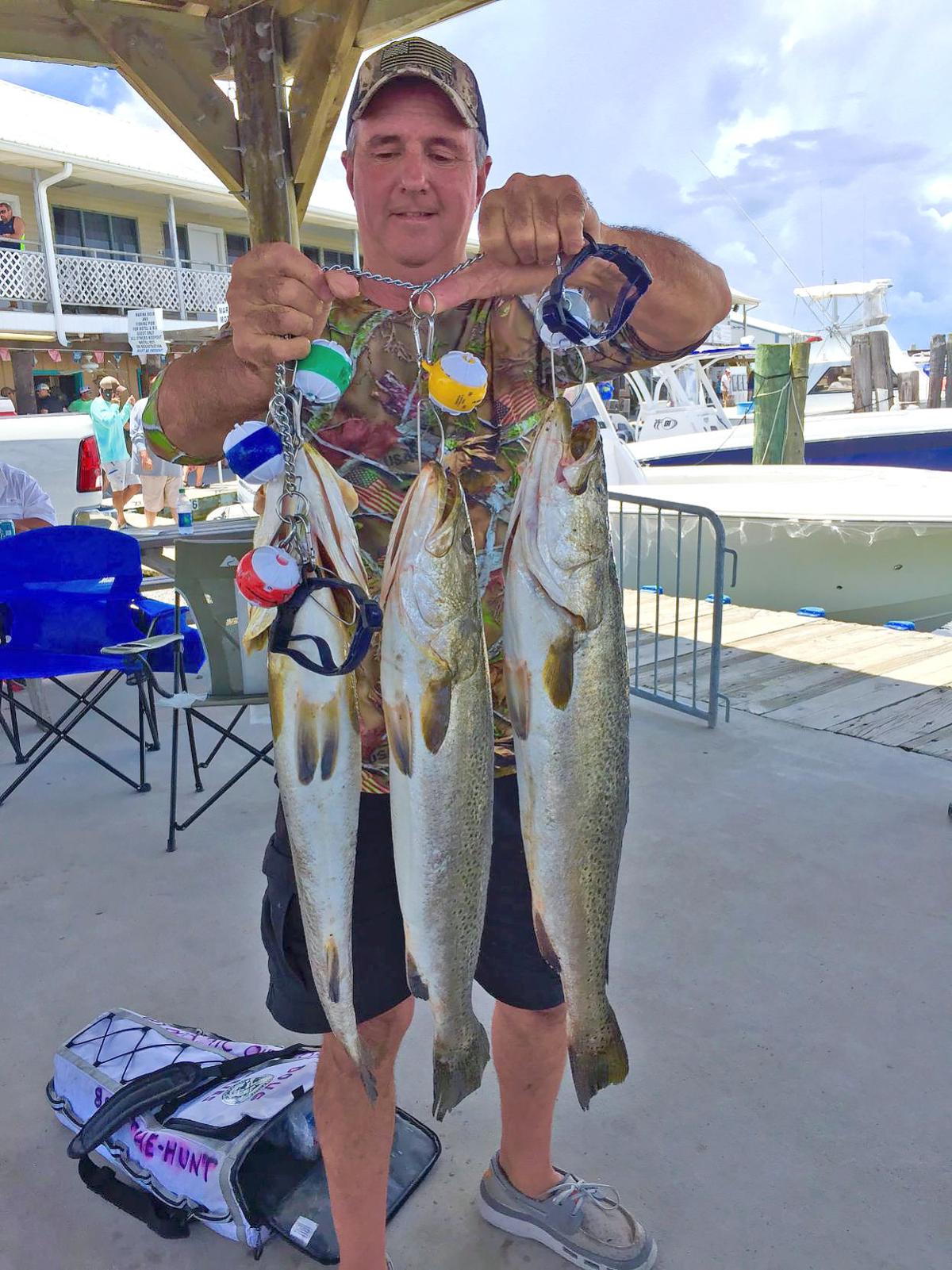 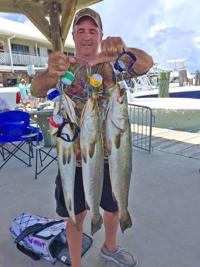 Doug Borries came from Ocean Spring, Mississippi, to find these speckled trout he weighed in last weekend's Grand Isle Tarpon Rodeo and the Faux Pax Lodge Rodeo at Venice. His 6-pound, 6-ounce trout won the category at Grand Isle and in the Faux Pas, and the other two, taken from a kayak, went first and second in that division at Grand Isle. 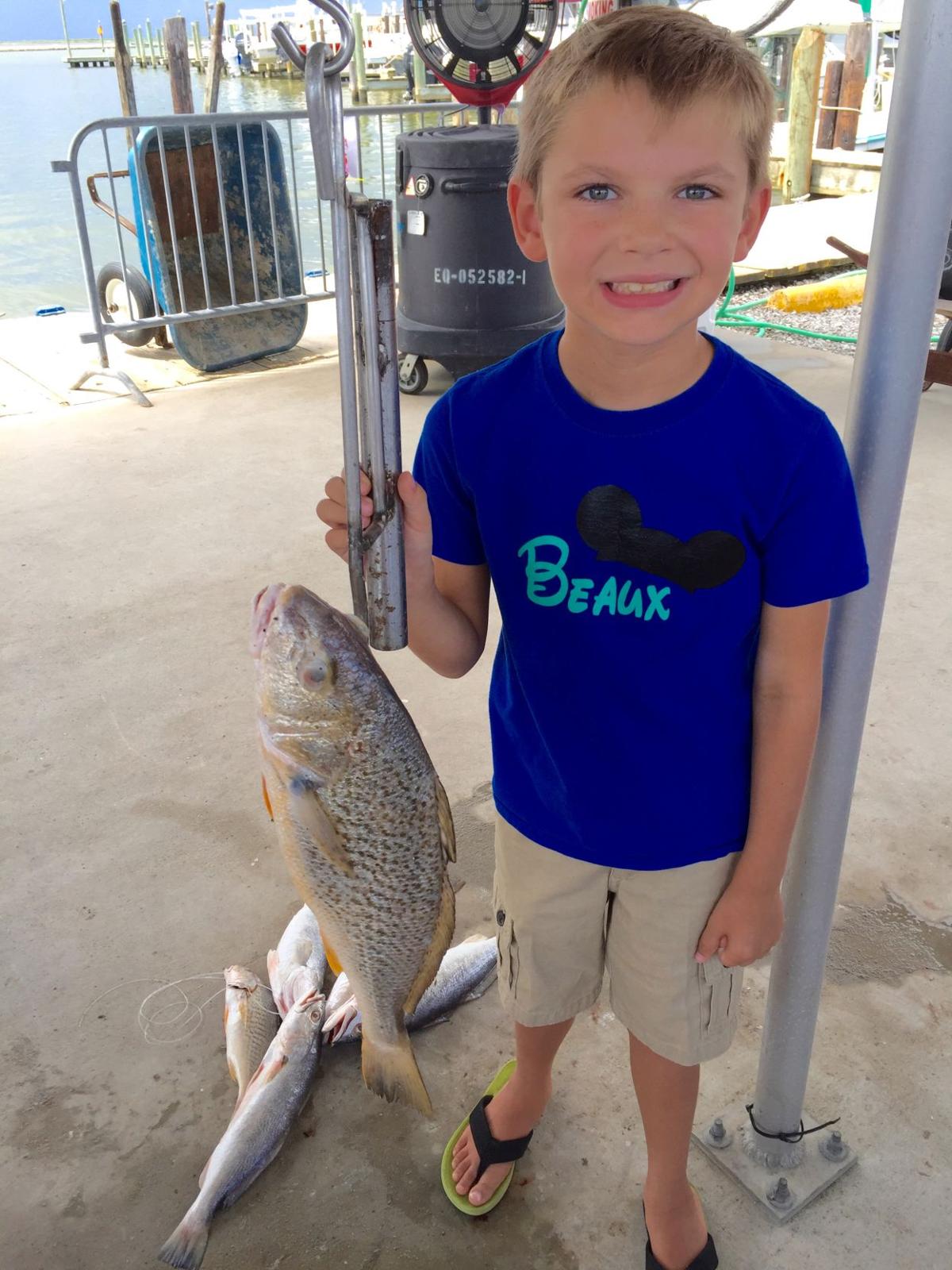 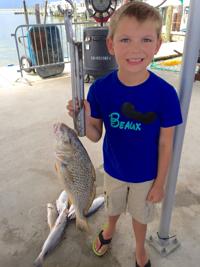 Aston 'Beaux' McKinney was with his dad, Louis, on their trip to a oil platform on the east side of the Mississippi River to take this 2-pound, 6-ounce croaker, a first-place winner in the Grand Isle Rodeo's Children's Division. The platform also produced three white trout he weighed to sweep that Children's category. His dad, a Grand Isle rodeo veteran, placed third in the Inside Division with a 4-4. The three top croakers weighed 4-10, 4-6 and 4-4 and were the heaviest weighed in the rodeo in the past 10 years.

Doug Borries came from Ocean Spring, Mississippi, to find these speckled trout he weighed in last weekend's Grand Isle Tarpon Rodeo and the Faux Pax Lodge Rodeo at Venice. His 6-pound, 6-ounce trout won the category at Grand Isle and in the Faux Pas, and the other two, taken from a kayak, went first and second in that division at Grand Isle.

Aston 'Beaux' McKinney was with his dad, Louis, on their trip to a oil platform on the east side of the Mississippi River to take this 2-pound, 6-ounce croaker, a first-place winner in the Grand Isle Rodeo's Children's Division. The platform also produced three white trout he weighed to sweep that Children's category. His dad, a Grand Isle rodeo veteran, placed third in the Inside Division with a 4-4. The three top croakers weighed 4-10, 4-6 and 4-4 and were the heaviest weighed in the rodeo in the past 10 years.

For the folks who believe the Grand Isle Tarpon Rodeo has lost its luster, there’s proof to the contrary.

Sure, the mayhem, the falderol, most of the underage drinking and the hours it took to go from one end of the near nine-mile-long island to the other are gone — other unmentionable stuff is gone, too.

But the fishing, the competition that’s been around for decades, is evident.

Without the presence of a first-day tarpon, the rodeo’s weigh station is, annually, a near ghost town. A few show up, and the first-day leaderboard is pimpled with names in the Big Game, Shoreline and Kayak divisions. Most categories in the Inside and Children divisions fill, but the fishermen’s names there are posted with the knowledge that two full days on and outside Louisiana waters lay ahead, and there are lots of other waiting to put their names among the top three in the 40 rodeo categories.

And the latter happened last weekend.

Only nine among Thursday’s 52 entries survived to Saturday’s final-day leaderboard; only three of Thursday’s No. 1 fish remained in that spot for the awards presentation.

The only vacant category was Tarpon. There was a tarpon tagged and released Saturday to continue the string of tarpon caught for this “tarpon” rodeo, and, true, there was frustration among the tarpon fleet, but maybe it’s a good thing tarpon were left to swim.

Saturday was a typical Saturday with the push to get “rodeo” fish weighed. In at least six categories, the leaderboard was reset fully twice.

Before Jeff Landry came in aboard the “Fleur de Lis” and his 389-pound, 9-ounce blue marlin — the Fleur de Lis crew tagged and released three other blues — Mississippi Gulf Coast angler Doug Borries wowed the weighstation crowd with the three heaviest speckled trout weighed at the GITR in several years.

Fishing a location he said was east of Grand Isle, Borries brought in a 6-6 “mule” trout he entered in the Inside Division, and two more 5-pounders in the Kayak Division.

“I’m catching them at night on live croakers,” he said. “There are fish there during the day, but they’re much smaller.”

Borries said he caught a 7-2 in a rodeo three weeks ago, and went back to check last week and landed, and released, a 6-pounder.

“It showed me the fish were still there. But Thursday was too rough to fish from a kayak, and I caught that big one from my boat. Friday night I was able to put the kayak in and catch those 5-pounders.”

Despite the low-pressure system hanging offshore for most of the three rodeo days, trout fishermen were successful.

Most charters ran behind the island, or east to Grand Terre, or west into the Timbalier area and found mostly all “keeper” trout.

Laid Back Charters’ Frank Dreher came in with near limits for two- and three-angler trips all three days, and most other charters reported the same. Live shrimp in the inside waters and live croakers along the beaches appeared to provide the best action, and it appeared most stayed away from The Fourchon’s beaches, where a Saturday report came in with no trout and only two ladyfish.

Borries left Grand Isle just in time to make the 6 p.m. deadline in Venice for Saturday’s final day for what was a highly competitive Faux Pas Lodge Rodeo.

His two heaviest trout finished first and third, and although he had only three fish, he finished second in the five-five Trout Stringer.

While the weather played havoc with the Grand Isle anglers, the low pressure sitting near the mouth of the river and to the southwest put a crimp in the plans of the Faux Pas fishermen.

Still, Faux Pas finished with good weights, and the competition was fierce among this rodeo’s loyalists.

And, Double J’s five-red snapper stringer weighing 119.95 pounds would be impressive no matter the location.

There was the usual appearance of the BLUMF crew, a group tied together by the Babin family, who showed up at Grand Isle with their usual broad smiles and strained backs indicative of the ice chests they were about to unload.

“If this fish holds up, it will be the fifth straight year we’ve won,” Lance Babin said. “We love to catch (black) drum, and this year we finally got on some big ones.”

Yeah, like someone was going to bump a 51-pound, 14-ounce black drum from first place. Good luck with that. The Babins swept the board.

“Finally I can say Oyster Bayou is back. We caught big redfish, too. For years oyster beds disappeared from the bayou, but they’re back again, and the fish are back. I can’t tell you how excited we are about that,” Babin said.

The 'croak' is back

Another species falling on hard times in recent rodeos is croaker, not that there’s a lack of these fish for baitfish, but the giants have been hard to find recently.

Moments before the Children’s Division 3 p.m. weigh-in deadline, 8-year-old Beaux McKinney showed up with his dad, Louis, who has dominated the Croaker category for years.

That wasn’t to be this year, because folks are finding big croaker around rigs near the mouth of the Mississippi River. McKinney said he fished east of the river, while another rival angler, Adam Guillory, said he’s found a “croaker honey hole” in the West Delta oil block.

“They’re always there,” McKinney said “In all the time fishing there I’ve caught only one red snapper. There are lots of vermilion snapper there. Maybe because there are no red snapper is the reason why we’re the only boat on that rig. It’s held big croaker there for years.”

White trout live under that rig, too, and catching some allowed the younger McKinney to sweep the board.

Guillory showed up after the elder McKinney entered his 4-4, and weighed the rodeo’s top croaker, a 4-10. Joseph Baudoin’s 4-6 croaker was one of the few Thursday fish that stayed on the leaderboard.

Susan Villere is one of a handful of die-hard women tarpon fishers, and she said she stayed ashore during Thursday’s stormy seas.

“The good news is we had more than 70 fishermen show up (Wednesday night) for the first Grand Isle Tarpon Club gathering for the rodeo,” Villere said.

The club was formed this year, and Houma tarpon chaser Jeff DeBlieux said the club set the rules for the rodeo’s tarpon category. He said the rodeo’s First Tarpon Award will not be based on whomever brings the first tarpon to the scales, but will be judged when the first tarpon is landed. Anglers will mark the time of their catch, and that will stand for the first tarpon.

Red snapper fishermen won’t have to worry about trying to avoid greater amberjack on their weekends-only trips.

The AJ season is open and is projected to run through Oct. 31. The daily limit is one per angler and the fish must measure a minimum of 34 inches to the fork length to go in the ice chest.