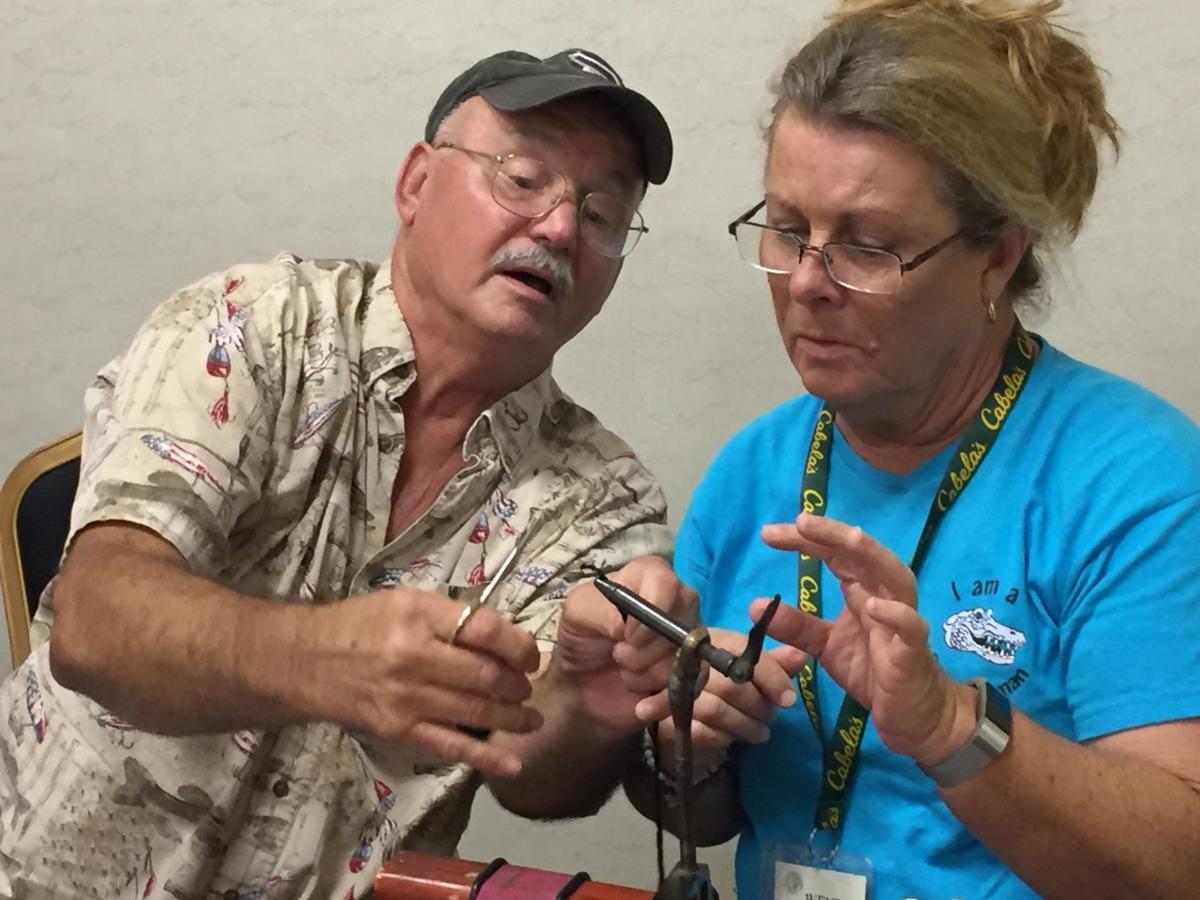 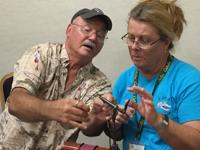 Darrel Crawford, left, shows Louisiana Outdoor Writers Association president Wendy Billiot the finer art of making a fly to catch south Louisiana panfish. Like hundreds of others Crawford has helped in his more than 40 years of tying fishing flies, Billiot was tying her first fly. Crawford will lead his final class of the year Saturday morning at the Ascension Parish Library in Gonzales. 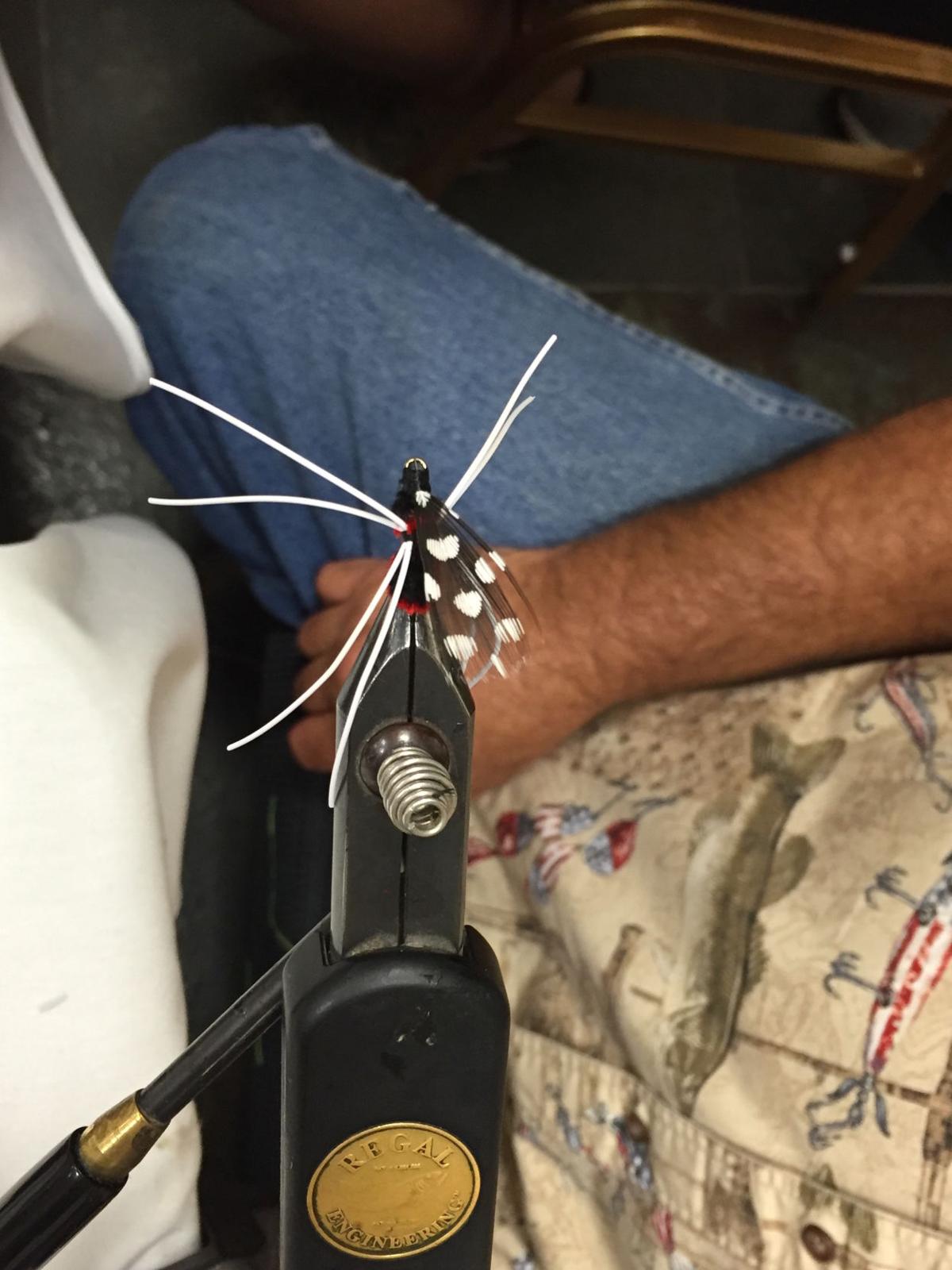 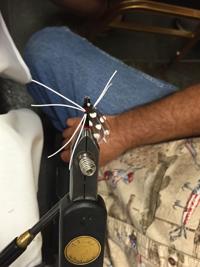 Darrel Crawford shows the finished product, a bream-catching fly tied by Wendy Billiot during a demonstration/fly-tying session in Gonzales.

Darrel Crawford, left, shows Louisiana Outdoor Writers Association president Wendy Billiot the finer art of making a fly to catch south Louisiana panfish. Like hundreds of others Crawford has helped in his more than 40 years of tying fishing flies, Billiot was tying her first fly. Crawford will lead his final class of the year Saturday morning at the Ascension Parish Library in Gonzales.

Darrel Crawford shows the finished product, a bream-catching fly tied by Wendy Billiot during a demonstration/fly-tying session in Gonzales.

It was a simple question, “Darrel, how many flies do you think you’ve tied in your life?"

Darrel Crawford’s answer was a tracking of his fishing life for the past 55 years.

“About the time I was 12 and it was steady until maybe 19 or 20 (years old),” the Gonzales veteran fishermen said earlier this week.

OK, so, it appears, Crawford went the way of so many men in their youth when pleated skirts replaced the rubber skirts he was using to make his topwater poppers and a much-less-than-an-ounce lure he called a “bream killer.”

Yeah, he got married, to Jennifer — and they’re still married 43 years later — and he said he took a three- or four-year break when all fishermen believed, back then and still today, they would be the next bass fishing kingpin.

“I got away from fly fishing, had the Ambassadeur 5000As, 5000Bs and 5000Cs (top reels in the day) and was catching a lot of bass on the black, 6-inch Scoundrel worm — believe they came from Creme Worms — and was fishing with Kenneth Fayard and we weren’t catching anything, two hours and nothing.”

Well, as the worm turned, Crawford remembered his fly rod rigged with a chartreuse popper.

“It wasn’t chartreuse back then, it was lime-green — and I cast into the tree tops just like my grandfather used to do on the Tickfaw River," he said.

Crawford  retreated to those memories of his grandpa “doodle-socking” around Tickfaw’s cypresses and brushpiles and catching giant bass.

“He called them green trout and one time he caught an 8-pounder, and I told him I would have it mounted for him, but he told me that fish were meant to stuff a belly, not stuff the fish,” Crawford said. “He came from the Depression, so a fish was food.”

Anyway, doodle-socking is an old method involving a jig of some weight and color rigged on a longer rod. The intent is to stay away from the target, drop the lure in and jig it just violently to aggravate old Mr. Green enough to attract a strike.

“I was going to do the same thing with the fly,” he said.

His story goes that he twitched and stripped (the method a fly fishermen uses to retrieve line) enough to entice a strike on the first cast.

“I like fishing from the back of the boat ‘cause I get the fish the guy in the front misses,” Crawford said. “That first fish was a 4½-pounder. Kenneth said it must have been a mistake, so the next spot we came to I did it again, and caught a 2½-pounder.

“Kenneth said he saw what I was doing, that I was getting the fish so ticked off they’d have to hit the it, and I told him this was fun, and it set me back to the way I wanted to fish,” Crawford said.

From that day on, the Ascension Parish fisherman turned away from modern, conventional tackle and back to the days, when, he recalled, his first fly rod of many years before was a limber, 8-foot willow branch cut from the Natalbany River banks, rigged with a piece of wire he said he found in his backyard, a piece of monofilament leader and a 20-foot length of fly line.

“My uncle gave me the fly line and he said it was floating line, but I could never get it to float,” he said through a hearty laugh. “I even rubbed the line with lard and it still wouldn’t float.

“Can you imagine telling fishermen these days about using lard on their fly line? Heck, they probably don’t know what lard is.”

Most of what showed up in his ice chest were bream and goggle-eye, and, on occasions, bass and sac-a-lait and catfish.

Other fishermen took notice, and his hobby, among working as a construction foreman, painting inspector and raising children – “Jennifer was a wife, mother and teacher. We home-schooled our five children,” he said — turned out to be another income source.

“I began tying poppers and bream killers for stores around here, and it helped,” he said. “During the 1980s work was slow and guys said I needed to go on unemployment, and after a couple of weeks I thought that was stupid, so I picked up a paint brush and went to work. And I tied flies.”

Crawford said he learned that instead of giving away maybe 2,000-plus flies a year, he could feed his family with his flies.

“I kept nine stores in the area with baits maybe seven or eight years. Paul Rossi had the Catch 22 store on Highway 22 and he sold them for years, then moved them into his family’s Lone Oak Grocery when he closed down the tackle store. “It helped, really helped,” he said. “I guess I’d given away more than 10,000 flies” before he started selling them.

Crawford said bug tying was seasonal — “Maybe mid-March into September” — and then, about 16 years ago, a home-schooling mom asked him if he could teach a class on fishing and fly-tying.

He did, and then someone asked him to teach a tying class at the Jones Creek Library in East Baton Rouge Parish. He brought all the necessary tools, vises, hooks, corks for poppers, yarn, feathers ... the works.

“I couldn’t sell them. It’s a rule at the library, but I sure taught a lot of people how to tie flies,” Crawford said. “Some lady at the Gonzales library heard about me and asked if I could give a demonstration there.”

Sure enough, and that first class of nearly 40 adults and kids met for two hours two nights a week.

“We started with the basics, how to make a poppin' bug, then the next night a bream killer, putting on the yarn, and how to paint them, how to put on the eyes, how to push the rubber legs through the body, and what colors worked best, and they left with their new baits,” he said. “And I supplied everything. It was a great time.”

Crawford was asked to continue the class, but he said he didn’t want it to interfere with school work for the kids, and decided to move the class to Saturdays — and he did it for more than a decade.

Until: “Guess it about three years ago when I decided to stop teaching, and I had to tell everyone it wasn’t that I was sick or dying,” he said.

While he didn’t say it, his spirit, his devotion was getting expensive: “I didn’t want anyone to have to break the piggy bank to enjoy what I’ve enjoyed my whole life,” he said.

His hiatus didn’t last long: folks called begging for his return to the library. He did, and trimmed the classes back to the first four months of the year.

Crawford will be back Saturday at the Gonzales Library on South Irma Boulevard.

He loves fishing from his kayak, and, at 67 next week, his voice tells those days are getting a bit more difficult. His favorite spot is the St. James Boat Club off U.S. 61 south of Sorrento: “The spot between the two launches is great for launching kayaks.”

But, Saturday might be his last class, after what he could only estimate to be tying or teaching to tie tens of thousands of flies.

“I made mention this was my last year, but I’ll probably be back. It’s in my blood,” Crawford said. “I tell people I’m not an instructor. I just like teaching and like helping people — youngsters are on the top of the list — to catch fish.

“I love what I’m doing, and you just can’t give up what you love. There is an art in tying flies, and I want to pass it along to the next generations.”

Crawford asks anyone wishing to take the class to bring their materials. He has some, and a couple of extra vises. Need more info, call him at (225) 253-4127 or email: wimpflies@gmail.com.