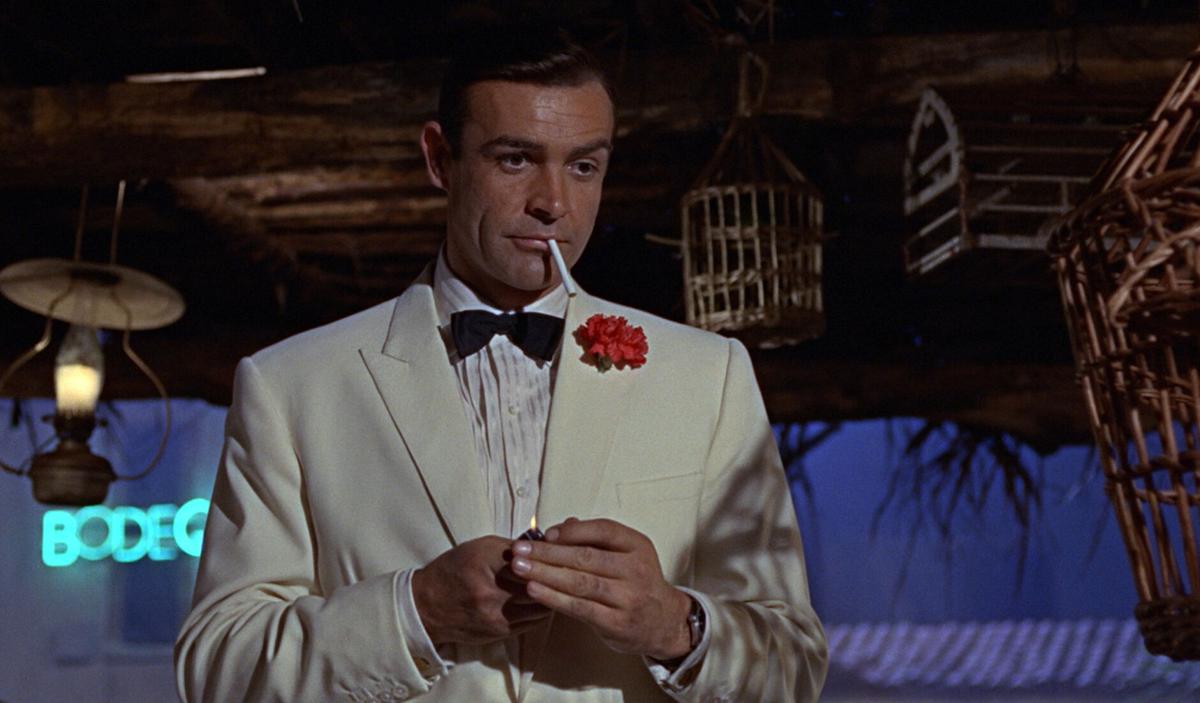 Sean Connery as James Bond in a non-golfing scene from the 1964 movie ‘Goldfinger.’ 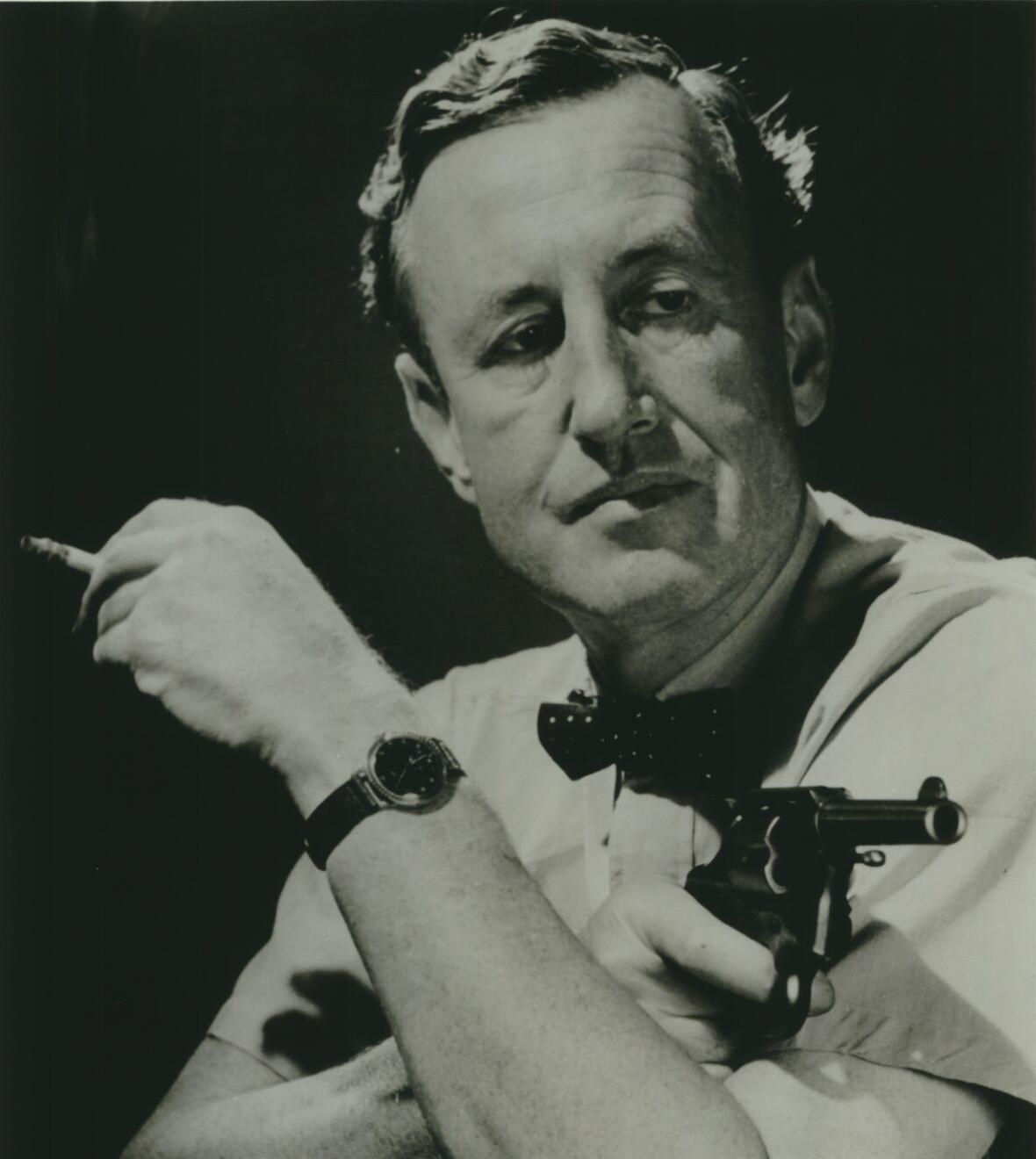 Ian Fleming, author of the James Bond books, wrote an unforgettable golf match into his 1959 novel 'Goldfinger,' using a thinly veiled version of his beloved course Royal St. Georges as the backdrop.

Sean Connery as James Bond in a non-golfing scene from the 1964 movie ‘Goldfinger.’

Ian Fleming, author of the James Bond books, wrote an unforgettable golf match into his 1959 novel 'Goldfinger,' using a thinly veiled version of his beloved course Royal St. Georges as the backdrop.

“The fifth was again a long carry, followed by Bond’s favourite second shot on the course — over bunkers and through a valley between high sand-dunes to a distant, taunting flag. … Bond stood on the tee, perched high up in the sand-hills, and paused before the shot while he gazed at the glittering distant sea and the faraway crescent of the white cliffs beyond Pegwell Bay. Then he took up his stance and visualized the tennis court of turf that was his target.”

This is the story of golf, one of modern pop culture’s most enduring and beloved characters, and the man who loved them both.

Ian Fleming wrote 12 James Bond novels plus several short stories published between 1953-66. The last novel, which saw print the year after Fleming’s death in 1964, was the rough cut of a manuscript for “The Man with the Golden Gun.” Because of that, the book is considered a poor cousin to its earlier counterparts like “From Russia With Love,” said to be one of the books John F. Kennedy kept on his nightstand in the White House, and “Goldfinger.”

The early chapters of the latter are highlighted by the famous golf match between Bond and bad guy Auric Goldfinger, over the humps and bumps and windswept sand dunes of a course Fleming called “Royal St. Marks.”

Turns out, Royal St. Marks is but the stage name for Royal St. Georges, Fleming’s home club and the site of this week’s British Open. It is the 15th time for the club by the English Channel in Sandwich, England, to host golf’s oldest championship, which makes a grand return for its 149th playing after not being held in 2020 because of the pandemic.

Fleming brushes but a thin coat of fictitious varnish over Royal St. Georges seaside links in “Goldfinger,” published in 1959 and the seventh of the Bond novels. He trades the name of England’s patron saint for one of the 12 disciples. He changes the name of Royal St. Georges’ club pro at the time, Albert Whiting, to Albert Blacking. And the sixth hole, a sand-locked 176-yard par-3 called The Maiden is referred to as The Virgin as Bond and Goldfinger play a deadly serious match for $10,000.

But virtually all of Royal St. Georges’ characteristics are faithfully reproduced by Fleming — the club's captain-elect when he died at 56 after years of heavy smoking and drinking. Fleming's famous details included the actual view from the course of Pegwell Bay, an inlet of the Channel, and the coastline’s famous white cliffs.

Baton Rougean Jay Babb has played Royal St. Georges along with several other courses on the British Open rota: Muirfield, Troon, Royal Portrush (the course in Northern Ireland that rejoined the rota in 2019) and Trump Turnberry, a resort course that has dropped out of the rotation for what are obviously political reasons. In normal times, Babb and a group of American and British friends play a Ryder Cup-like event in a golf society they call “Biggles,” named after an adventurer as fictious as James Bond in his own series of books.

“Everyone has a nickname,” Babb said. “There’s a guy named Corpse … I don’t even know his real name. But we all love each other.”

One of their matches was at Royal St. Georges, a club that Babb said stands for little informality.

You don’t have to carry a “Double-0” status to play Royal St. Georges. Like just about all the courses on the British Open rota, there are tee times for the public. But to get the full experience of the club it helps to be there with a member. And they will insist you play an alternate shot match with a partner. Playing stroke play, as in the British Open, requires special permission.

“It’s very restrictive if you’re not with a member,” Babb said. “Access is very limited. But being with a member you have full access to the whole place.”

Though not as famous as some of its Scottish cousins like St. Andrews or Muirfield, Royal St. Georges is a stern test. The Financial Times newspaper, according to Golf Magazine, once called it the finest seaside links in the world. Aside from Greg Norman’s winning 13-under par score in 1993, the average score of the other six Open winners there since 1949 is a mere 2.6 strokes under par, including Darren Clarke’s 5-under 275 in 2011.

“As far as the course goes, it’s wonderful,” Babb said. “Very prestigious. The royal family has several places they play, but of the courses on the British Open rotation this one probably has the greatest connection with them.”

If you get up early mornings this week and peer through bleary eyes trying to catch vistas of Royal St. Georges that remind you of the golf match in the 1964 movie version of “Goldfinger,” you will be disappointed. The film version wasn’t shot at Royal St. Georges but an inland course called Stoke Park, about 25 miles west of London. It was probably chosen not because of its resemblance to Royal St. Georges/Marks but its proximity to Pinewood Studios, where much of “Goldfinger” was shot, only about 10 minutes away.

It was during the movie that Sean Connery, the original and quintessential James Bond, developed a love for golf he would retain the rest of his life. Though he grew up in Scotland, the working-class Connery never played much before learning how to make a respectable swing for the cameras.

There were a couple of more differences between the book’s golf match and the one in the movie. There is no Nazi bar of gold that they play for as in the movie, just the cash. And Oddjob, Goldfinger’s henchman, doesn’t caddie for him in the book, merely serves as his chauffeur to the club.

And no, in the book Oddjob doesn’t slice the head off a clubhouse statue, either. The members at Royal St. Georges certainly would have none of that.