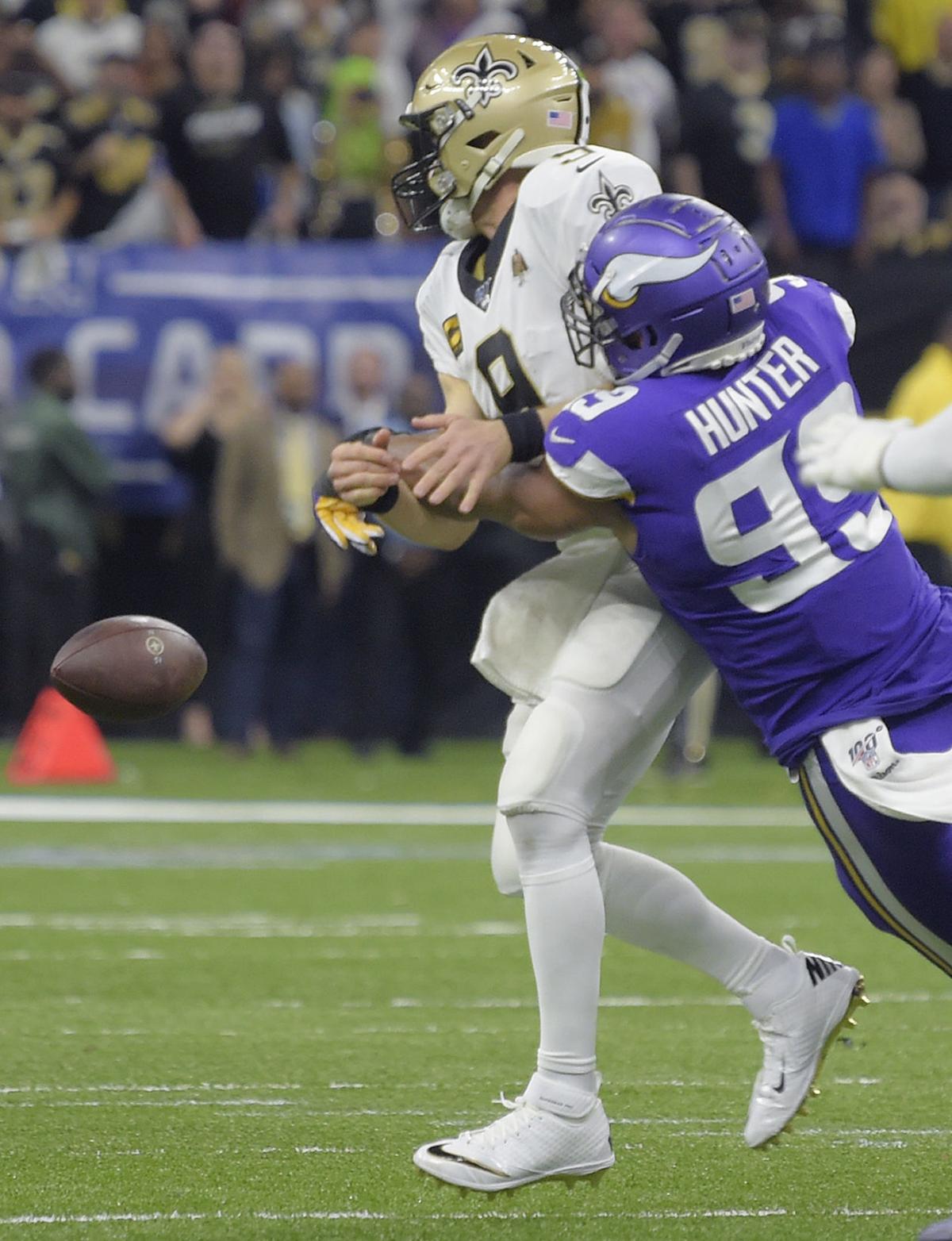 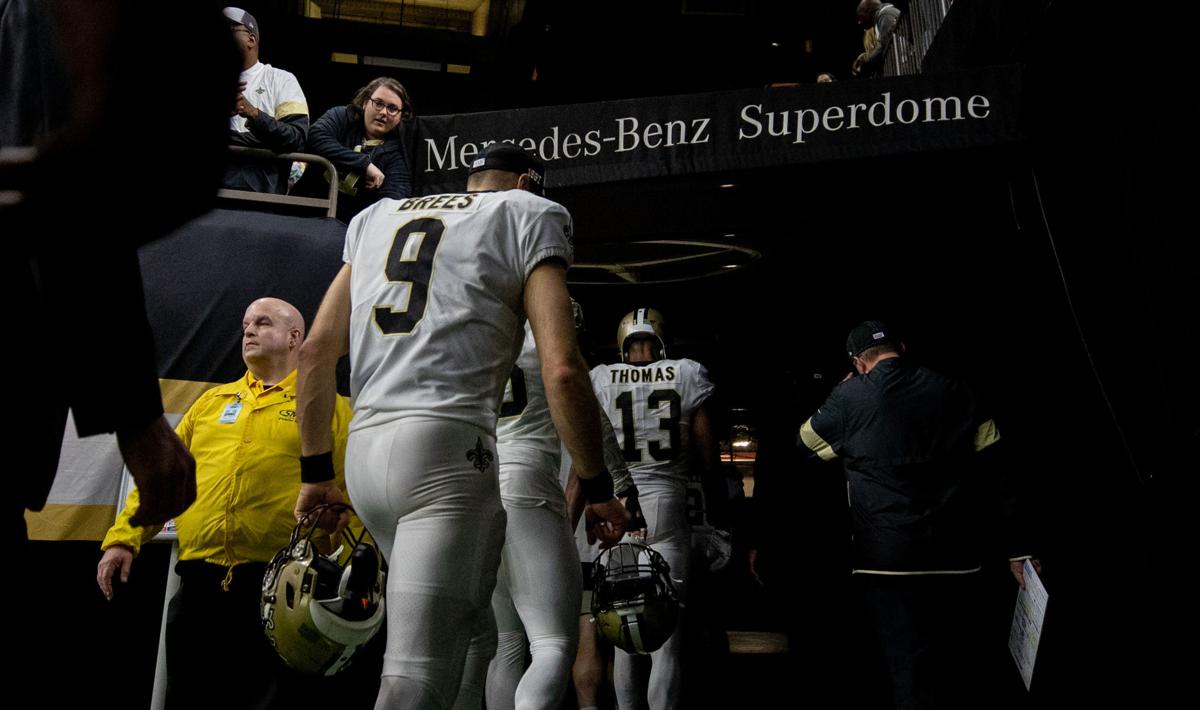 New Orleans Saints quarterback Drew Brees (9) and Saints wide receiver Michael Thomas (13) walk off the field after the Minnesota Vikings beat the Saints 26-20 in overtime in the Mercedes-Benz Superdome on Sunday, Jan. 5, 2020. 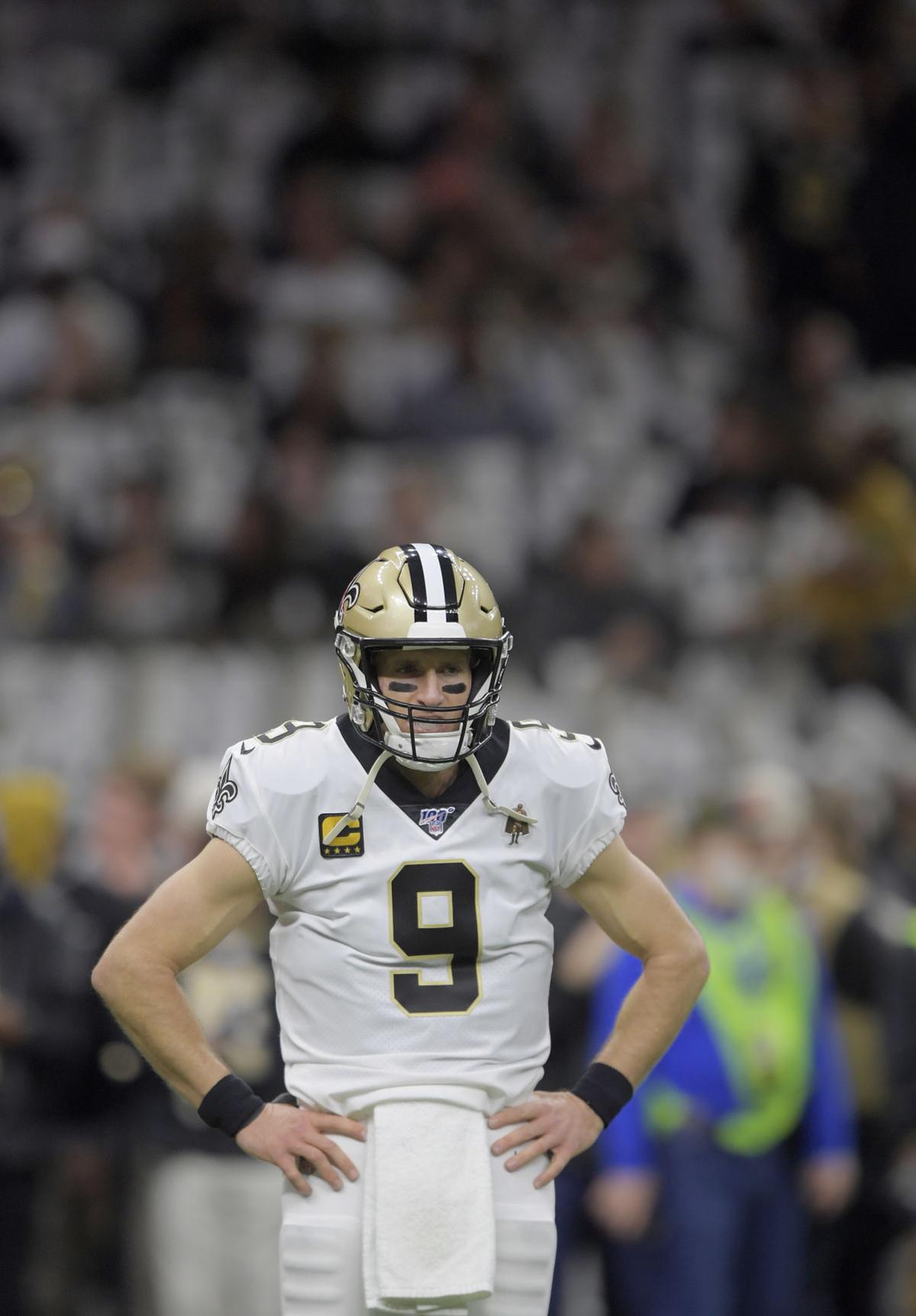 New Orleans Saints quarterback Drew Brees (9) sets up a play during drills before an NFC playoff game against the Minnesota Vikings in New Orleans, Sunday, Jan. 5, 2020. 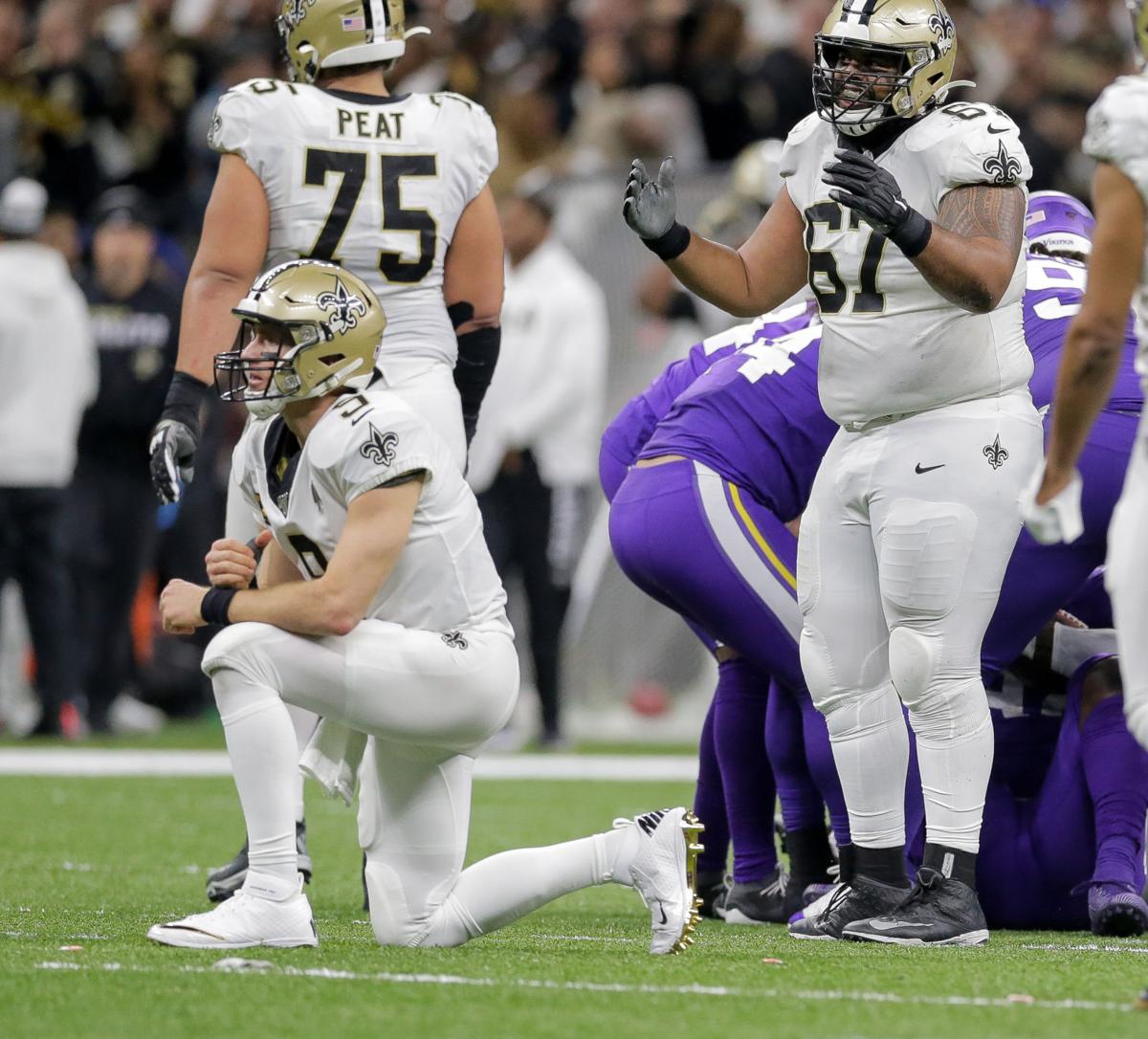 New Orleans Saints quarterback Drew Brees (9) and Saints offensive guard Larry Warford (67) are in disbelief after Brees fumbles the ball late in regulation against the Minnesota Vikings in the Mercedes-Benz Superdome on Sunday, Jan. 5, 2020.

New Orleans Saints quarterback Drew Brees (9) and Saints wide receiver Michael Thomas (13) walk off the field after the Minnesota Vikings beat the Saints 26-20 in overtime in the Mercedes-Benz Superdome on Sunday, Jan. 5, 2020.

New Orleans Saints quarterback Drew Brees (9) sets up a play during drills before an NFC playoff game against the Minnesota Vikings in New Orleans, Sunday, Jan. 5, 2020.

New Orleans Saints quarterback Drew Brees (9) and Saints offensive guard Larry Warford (67) are in disbelief after Brees fumbles the ball late in regulation against the Minnesota Vikings in the Mercedes-Benz Superdome on Sunday, Jan. 5, 2020.

All season, Drew Brees and Tom Brady duked it out for the NFL career touchdown passing record.

In the postseason, they dueled for the most frustrating finish. Losses that come with an extra pang of reality because they really, maybe, possibly could have been their final moments with the Saints and Patriots, .

Brady, after his team’s 20-13 loss to the Tennessee Titans that basically ended on a pick-six from his 1-yard line with mere seconds remaining, said it was “hopefully unlikely” he would retire though he turns 43 in August. Whether he comes back to the Patriots, whether that Brady-Bill Belichick juggernaut/dynasty/evil empire continues another season is a matter of pure conjecture.

Brees, who turns 41 Wednesday after next, was naturally asked about his future Sunday after a 26-20 overtime loss to the Minnesota Vikings. Or, to put it more precisely, he was asked how confident he was that he was not going to end his Hall of Fame career with this sudden, thudding exit from the playoffs.

After a quick, knowing chuckle, Brees said: “I’m not making any comments on that other than as I’ve told you guys the last couple of years, I always take it one year at a time. I kind of re-evaluate each offseason, find the things I want to get better at and move along.”

In a Brees career filled with shining moments and brilliant games, this wasn’t one of them. He was 26 of 33 for 208 yards and a touchdown, but was undone by two critical turnovers. The first was a throw for Ted Ginn Jr. deep into double coverage when merely moving the chains on third-and-7 would do, an interception that would set up Minnesota’s touchdown to take a 13-10 halftime lead the Vikings never relinquished.

The second came one play after a brilliant 28-yard keeper to the Minnesota 20 when Hunter, the villain of the piece, hit Brees’ arm as he was going back to pass. The ball was recovered by the Vikings at their 36.

After the play, Brees appeared to be venting his displeasure at Ginn. After the game, Brees peeled back the curtain on a pivotal play.

“There was a miscommunication as to what we were doing,” he explained. “The ball should have been out of my hands. All of a sudden that wasn’t the route that was run. Now I’m just trying to throw the ball into the dirt to avoid a sack. Right as my hand is going back (Hunter) just gets a piece of my arm and that ball comes out.

“I’m really disappointed in that. That should never have happened.”

Saints stunned by Vikings in wild overtime playoff to end season: 'You can't do anything about it'

There is another factor to consider on that play, however. Hunter didn’t swat the ball out of Brees’ hand, it just squirted out. You could make the argument that the thumb injury that sidelined him for five games earlier this season has still degraded Brees’ ability to grip the ball.

In other words, there were times when Brees looked old and injured. It’s telling that the one really deep ball the Saints completed Sunday was by Taysom “The Swiss Army Knife” Hill, for 50 yards to Deonte Harris.

You get a sense Brees’ future is much in his hands. The way he spoke of the Saints organization, the “we” instead of the “they” of his words, it sounded like a guy who believes he can be the team’s fall 2020 guy.

“We’ve got an incredible culture here,” Brees said. “We’ve got a great foundation built. We know there’s a stable of guys who are going to be here a long time. You’re always spending your offseason finding the other pieces, the complimentary pieces, whether it’s through the draft or free agency. You never know how that’s going to shake out.

“The bottom line is I know the environment. Whoever comes in from the draft or free agency or whatever, I know the environment they’re coming into. The type of culture we have, the type of locker room we have. It is one that is fun. We work hard, but we play hard. We have fun together. We love each other. This is the result. Winning a lot of games. Guys playing for one another. Guys love coming to work together in this locker room.”

NFL on Saints-Vikings ending: 'None of that contact rises to the level of a foul'

The Minnesota Vikings bounced the New Orleans Saints from the playoffs with a 26-20 overtime win Sunday. And the final play will have plenty o…

One of the guys in the locker room, linebacker Demario Davis, said Brees will return.

“I don't think there is a person in the building that's committed to the Saints organization like Drew Brees and wants to win more than him,” Davis said. “Individually, he's the only one who can answer that question, I can't speak for him, but as far as what I see from a competitor's standpoint, nobody has more drive or ambition or will to prove what he wants to prove.”

Were it only just drive and competitiveness to consider. There is also money.

Brees signed a two-year, $50 million contract in 2018 that paid him $23 million in 2019 ($11 million salary, $12 million roster bonus). That contract, however, voids itself in March, meaning a new deal must get done. And whether Brees plays for the Saints or not, the 2018 deal leaves New Orleans with a dead cap price tag of $21.2 million.

That hit is mitigated by the NFL annually increasing the salary cap, by $10-11 million each season, but it’s still a large number. And all this conjecture is before anyone addresses the elephant in the room as to whether the Dallas Cowboys will try to make Sean Payton their new coach.

What we learned, what's trending and final thoughts as the Saints season comes to an end

The New Orleans Saints 2019 season game to an untimely end Sunday, with a 26-20 overtime loss to the Minnesota Vikings.

In New Orleans, just like New England, the end of an era could be pushed down the road another year. Or it could be at hand.

A season that ended all too soon for the Saints is going to tell a great deal about who is here for the next one.

Hill became the first player ever to record at least 50 passing yards, 50 rushing yards, 25 receiving yards and a tackle in a single regular-s…