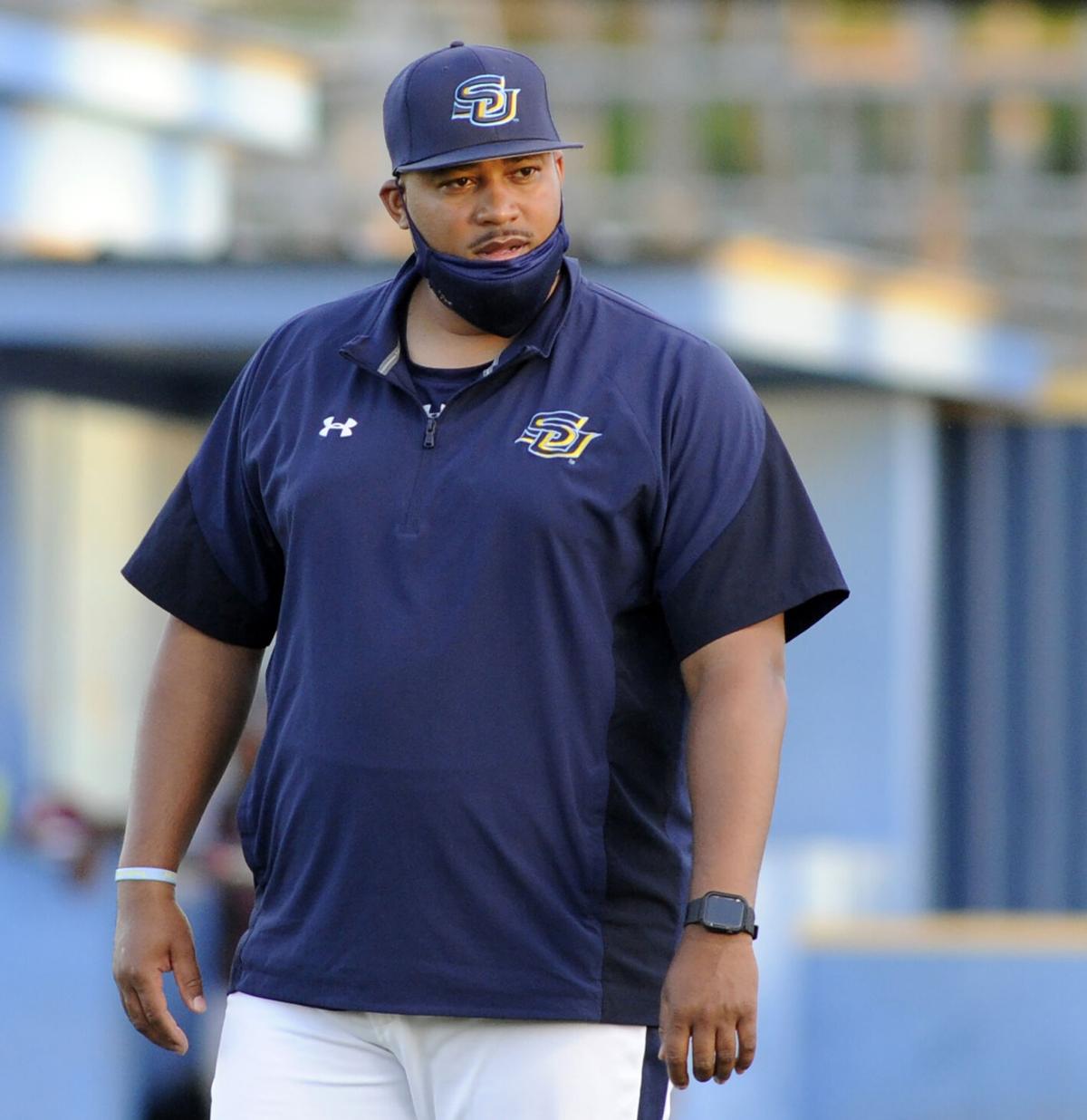 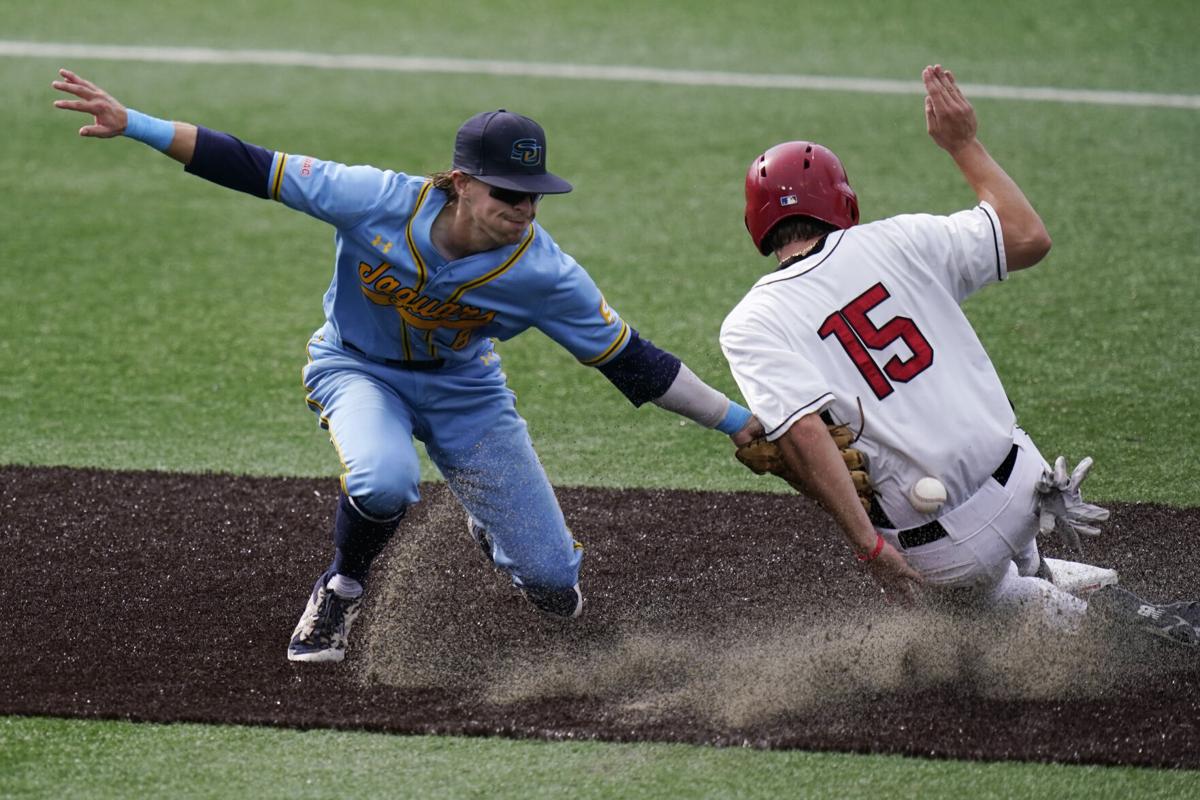 Southern shortstop Judah Wilbur, left, loses the ball as he tries to tag out Fairfield's Ryan Strollo (15) in the fourth inning in the NCAA Austin regional, Saturday, June 5, 2021, in Austin, Texas.

Southern shortstop Judah Wilbur, left, loses the ball as he tries to tag out Fairfield's Ryan Strollo (15) in the fourth inning in the NCAA Austin regional, Saturday, June 5, 2021, in Austin, Texas.

AUSTIN, Texas — The end of Southern’s baseball season with Saturday’s 6-2 NCAA tournament loss to Fairfield marked the beginning of the search season for the program’s next baseball coach.

This season could be considerably shorter.

Southern athletic director Roman Banks stopped short Sunday of saying that interim coach Chris Crenshaw will get the job full time. But Banks heaped praise on the job Crenshaw did under adverse circumstances and said he checks a lot of the boxes Banks is looking for in a coach.

“Coach Crenshaw and I have already had several conversations,” Banks said. “I’ve congratulated him on winning the conference and doing a great job with the baseball program. I’m excited for what he’s been able to accomplish in the transition.

“The two most important things are to graduate players and to win championships, and he’s done that. All the time he’s been the interim coach we’ve talked to different people, but he’s done a great job. He fits the dynamic. He’s an alumnus, played under coach (Roger) Cador and coached under (Kerrick) Jackson.”

Crenshaw served as pitching coach and recruiting coordinator under Jackson until the latter left in December to take a position with Major League Baseball. Crenshaw was promoted Dec. 3, just 2½ months before the Jaguars’ began their season Feb. 20 at UNO.

Southern went 15-27 in the regular season (13-11 in SWAC play) but found a winning spark in the SWAC tournament. After a win and a loss, the Jaguars battled out of the losers' bracket with four straight victories, culminating with a stunning 7-6 upset of regular-season champion Jackson State in the tournament final. J-State had gone 24-0 in SWAC play and 3-0 in the tournament before O’Neill Burgos lifted the Jaguars to victory with a three-run home run in the ninth inning.

The SWAC’s automatic bid (Southern’s second straight after also winning it in 2019) propelled the Jaguars into the NCAA Austin regional. There Southern lost 11-0 on Friday to host and No. 2 national seed Texas and 6-2 on Saturday to Fairfield, which came in with the nation’s No. 2 RPI.

The losses, which put Southern’s final record at 20-30, didn’t diminish what the Jaguars achieved under Crenshaw in Banks’ estimation.

“I wouldn’t say anything until we’ve had a chance to shake hands and make sure we all have a great conversation with him,” Banks said. “It’s not just about this year, but future years.

“I think I can speak for our president and our board when I say we’re very appreciative of what he’s done and happy with the way he’s handled the transition.”

Crenshaw declined to say much about the job in the aftermath of the Fairfield loss, other than to say he hoped to stay on permanently.

AUSTIN, Texas — As baseball fortune would have it, the man who launched Southern into the NCAA tournament, O’Neill Burgos, had the bat and the…

He did say the challenges from this season won’t stop in 2022. The Jaguars will be losing five senior pitchers, including Friday’s starter Jacob Snyder and Saturday’s starter John Guienze.

“They all played big roles in the SWAC tournament,” Crenshaw said of his five seniors.

“You never want to end the season on a loss,” junior third baseman Zavier Moore said. “But at the end of the day we’re still SWAC champions. I’m proud of all my teammates, our seniors. I wish we could have done more for them. But I’m ready to get right back it next year.”