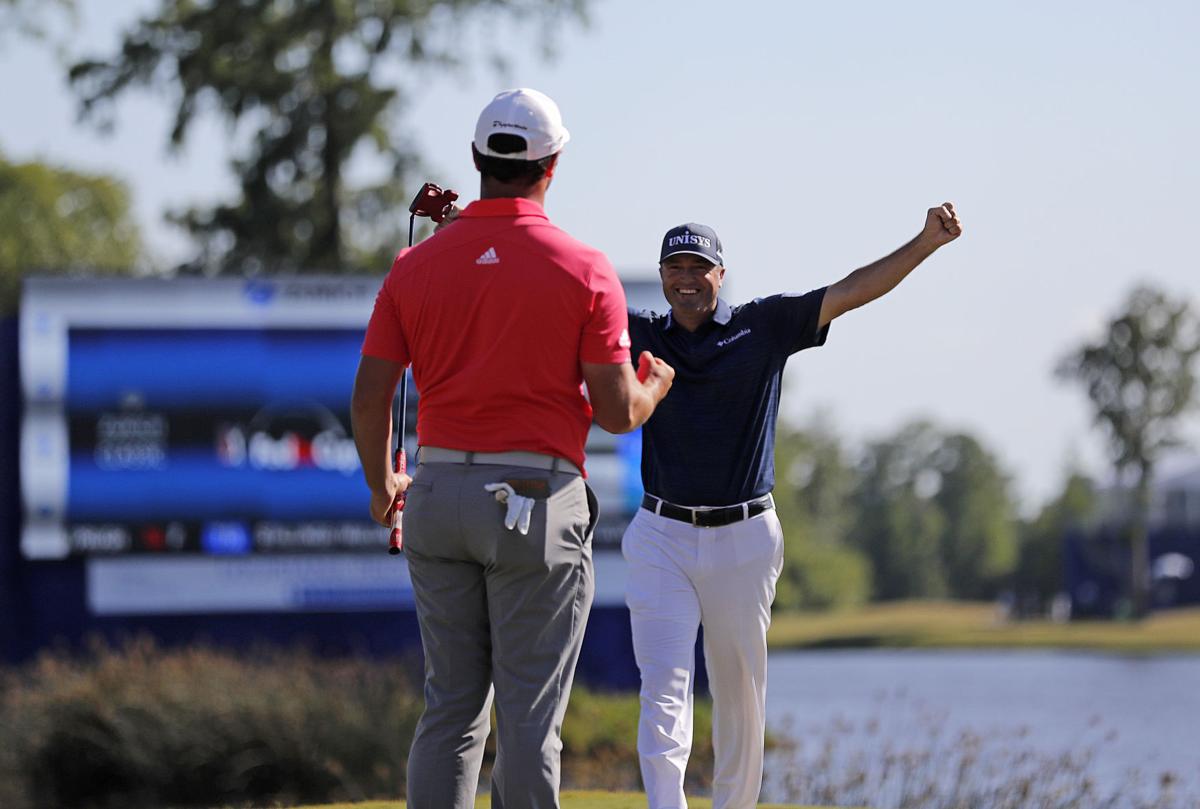 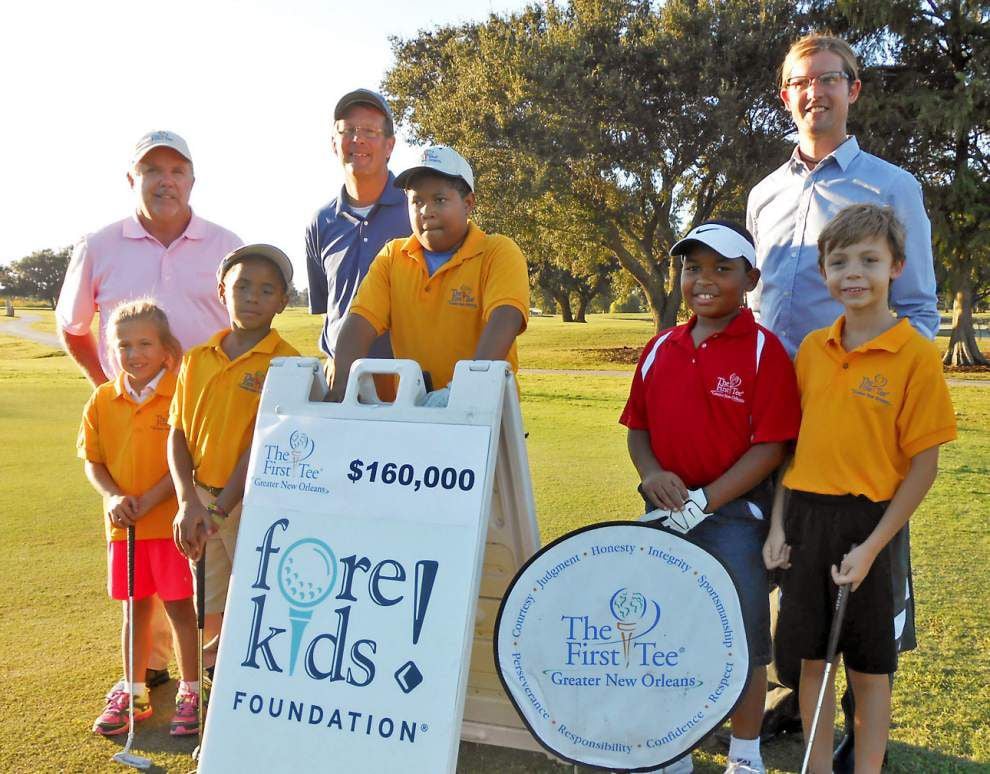 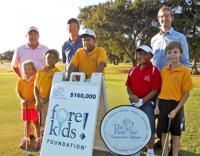 The Fore!Kids Foundation has supported the work of the First Tee of Greater New Orleans through the Zurich Classic. First Tee participants in the front row of this undated file photo are, from left, Ellie Dufrene, Brendan Villavuso, Kobe Narcisse, Glendon McKinney and Christopher Anderson. Behind them are Michael Rodrigue, president of the First Tee board; Steve Worthy, CEO of the Fore!Kids Foundation; and Chip Patterson, executive director of First Tee of Greater New Orleans.

The Fore!Kids Foundation has supported the work of the First Tee of Greater New Orleans through the Zurich Classic. First Tee participants in the front row of this undated file photo are, from left, Ellie Dufrene, Brendan Villavuso, Kobe Narcisse, Glendon McKinney and Christopher Anderson. Behind them are Michael Rodrigue, president of the First Tee board; Steve Worthy, CEO of the Fore!Kids Foundation; and Chip Patterson, executive director of First Tee of Greater New Orleans.

There’s a little alarm clock ringing in Ryan Palmer’s head that tells him he’s supposed to be in New Orleans right now.

His place is here, where he always is in late April, defending his Zurich Classic of New Orleans team title with Jon Rahm by day and dining by night at Mr. John’s, or Desi Vega’s, or one of his other favorite Crescent City spots.

Instead, he’s back home in the Dallas-Fort Worth area, cooped up in his house during this coronavirus lockdown or practicing at one of the local clubs there that are still open.

“We always have dinner with (Saints coach) Sean Payton and talk about who they’re looking at in the draft,” Palmer said. “That’s one of the big parts we’re missing this year. There are a lot of great memories. There’s a little sadness not being able to come there, but I know why we’re not.”

Fore!Kids Foundation CEO Steve Worthy can relate. He knows why the tournament, scheduled for this week at TPC Louisiana in Avondale, was canceled by the PGA Tour.

The Zurich Classic of New Orleans, one of the longest-running regular events on the PGA Tour for the past 62 years, was canceled Tuesday as a …

But the sadness is palpable, as he looks out the window of his now otherwise vacant tournament office (his seven employees are working from home) at the club grounds. He doesn’t see the normal trappings of tournament week: the grandstands and gallery ropes and entertainment venues.

“You come to grips with it,” Worthy said. “I texted my staff Sunday night and asked if they were pretending they were missing their 4:30 a.m. (Monday) wake-up call.

“The 1987 Ryder Cup was my first event in professional golf. I’ve never had one canceled. It’s strange. Nothing is happening. We understand why, but it’s hard to deal with.”

Worthy said he knew when they canceled The Players Championship in March after the first round that the Zurich was on the endangered list.

The PGA Tour at first canceled the four events between The Players and the Masters. Then the Masters was postponed to November, and the next four tour stops were canceled. So is the schedule for May. According to the Golf Channel, this is the first time since World War II that the PGA Tour won’t play a single tournament in either of those months.

There is golf on the horizon, though. The tour announced last week its plans to restart June 11 with the Charles Schwab Challenge at venerable Colonial Country Club in Fort Worth, one of the places where Palmer practices. There won’t be fans at any of the first four tournaments, but it is far better than nothing. And TV cameras will be there to beam the birdies and bogeys to a sports-starved world.

Palmer, who has started “Pros For A Purpose” to help charities of canceled tour events, said he plans to play the first three stops in Fort Worth; Hilton Head, South Carolina; and Hartford, Connecticut.

“I’m excited,” Palmer said. “I’ve had conversations with the folks at Colonial and I’m on the players’ advisory council. As far as all the testing and protocols, that’s all being talked about now. We’ll have a conference call on that in a week (to) 10 days.

“We’ll know more the next few weeks as the tour develops guidelines. When they give us the go-ahead, I’ll be excited to go play.”

PGA Tour eyeing May or June restart, possibly without fans in attendance at early events

The PGA Tour is exploring possibilities of returning to competition in June, possibly without fans in attendance at early events, according to…

The Charles Schwab and the RBC Heritage at Hilton Head were moved to June from their traditional weeks in May and April as the PGA Tour and the organizations running golf’s major championships reconfigured the schedule (one without the British Open, which is canceled). Worthy said the Zurich was never part of that equation, though.

“That was never really pitched to us,” Worthy said. “My sense is they knew New Orleans was hit worse than other places. I assume that factored into it.”

Instead the focus now is on trying to provide funding to the local charities that typically benefit from the Zurich Classic (Worthy said word on that is coming soon) and preparing for the 2021 tournament.

“By the time we get to next April, hopefully we get the same support (as usual) and the world is back to normal,” Worthy said.

That is a welcome thought. And save Ryan Palmer a seat at his favorite table. He’ll be back as soon as he and the rest of the touring pros can.

The Golf Channel and CBS will be showing rebroadcasts of final rounds of past Zurich Classic of New Orleans tournaments Thursday-Sunday. Here’s the rundown:

FRIDAY (2 p.m., Golf Channel): 2018 — Billy Horschel wins with Scott Piercy by one over Jason Dufner and Pat Perez. Horschel won as an individual in 2013.

SATURDAY (2 p.m., CBS): 2017 — Jonas Blixt and Cameron Smith win a Monday playoff over Scott Brown and Kevin Kisner despite Kisner’s final round “eagle in the gloamin’” chip in.