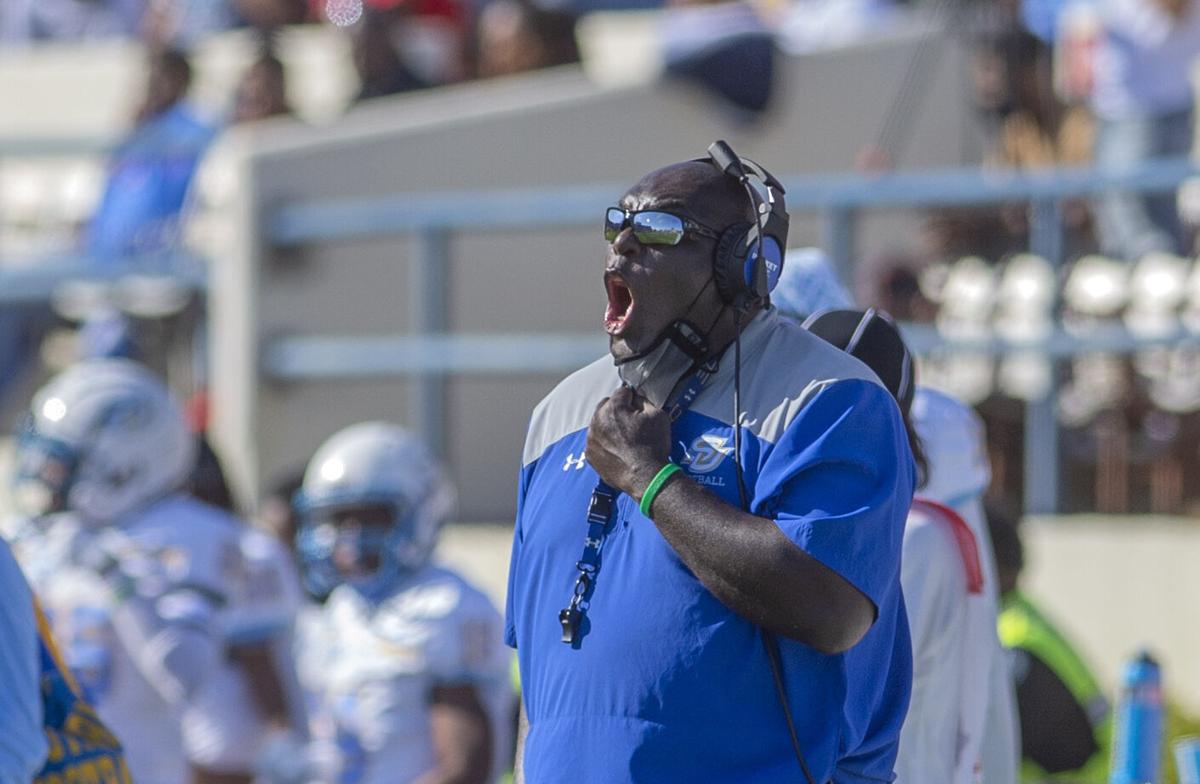 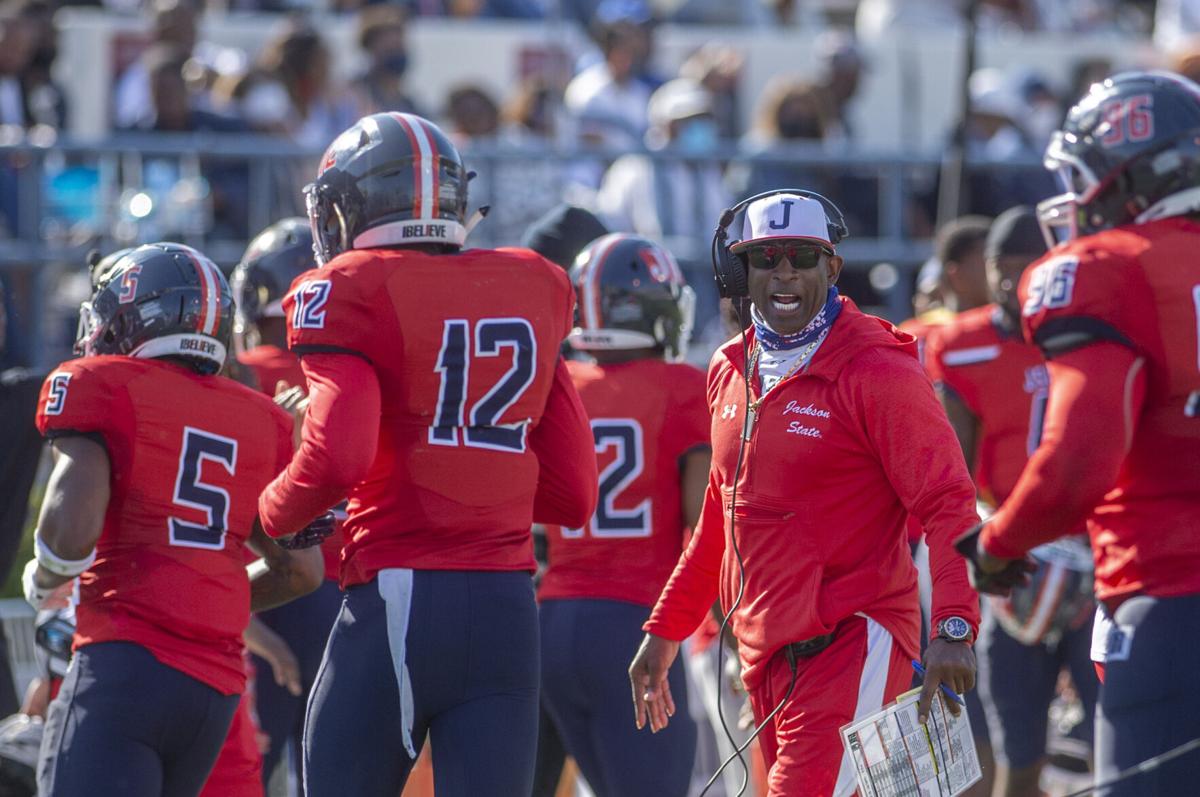 Jackson State head coach Deion Sanders, second from right, shouts directions to his team as they come off the field during play against Southern in an NCAA college football game in Jackson, Miss., Saturday, April 3, 2021. (Barbara Gauntt/The Clarion-Ledger via AP)

Jackson State head coach Deion Sanders, second from right, shouts directions to his team as they come off the field during play against Southern in an NCAA college football game in Jackson, Miss., Saturday, April 3, 2021. (Barbara Gauntt/The Clarion-Ledger via AP)

JACKSON, Miss. — There may not be two more diametrically opposite coaches in the Southwestern Athletic Conference than Dawson Odums and Deion Sanders, and it showed up big time Saturday on national TV in Southern’s 34-14 victory against Jackson State.

Speed and athleticism was Deion’s game on the field; he was a guy who could dominate on offense, defense and special teams. Along with that, he has a personality who could create excitement at the mention of his first name, and he thrives in the spotlight.

Odums? Not nearly so much. A former defensive lineman, he was a grinder, toiling in the trenches as a captain. As a coach, he appreciates the character-building of a loss as much as the glory of a victory. With his measured responses and chill demeanor, he can’t wait for the spotlight to go off of him.

Having his team perform so well on ESPN wasn’t about Odums or individual players getting attention, but for Southern. When he was asked his feelings about some of his certain players being center stage, he widened the scope.

“We got a chance to showcase everybody why we got a good program, a chance to see why they come to Southern University,” Odums said. “I’m going to watch the TV copy and hear what the commentators had to say. We’ve been good, and the world had a chance to see it. We’re a good football program and institution, all about building young men.”

The Dawson Odums vs. Deion Sanders aspect of the game might have been a consideration, but it wasn’t in the forefront of Odums’ mind, though he has gone out of his way to show gratitude for the attention Sanders has brought the conference.

Head-to-head, this time was a mismatch. Both teams had a week to heal up and prepare. By Sanders’ own admission, Southern was the far-better prepared team, and the Jaguars dominated like any SWAC team seldom does. Time of possession (42:49-17:11), plays (84-54) third-down conversions (14 of 20 to 1 of 8) suggested a much wider blowout. It could have been, but Odums finished the game by running out the clock inside the Jackson State 5-yard line.

“I said ‘Guys, why did we take a knee at the end? Because I’m about character. I’m going to hold you to a high standard.’ When you are down as an African American male, I don’t want to score on you for life, so I try to build you back up. That team was getting beat. I’m not going to bury them. Those are somebody’s children, too.

“I’ve been on that other side, and I know how they feel. I take my hat off to them as they continue going forward to get their program back to par. I said ‘Today wasn’t their day.’ We have to think about that mentoring young men. I’m proud to be the mentor of young men here at Southern University.”

The difference between Odums, the veteran coach in his ninth season, and, Sanders, the older, rookie coach who was an NFL superstar, was never more apparent than in the turning point of the game.

Trailing 10-7 and driving late in the first half, Sanders chose to go for a fourth-and-14 at the Southern 38-yard line rather than punt. It was a rookie mistake, and even Sanders said so. Punting Southern into a hole would have likely forced it to run out the clock, and JSU was going to get the ball to start the second half.

Instead, Jordan Lewis sacked JSU quarterback Jalon Jones for an 8-yard loss. Southern had the ball at its 46 with 45 seconds left. Quarterback John Lampley entered for starter Ladarius Skelton and hit Ethan Foster for 34 yards and then threw a 20-yard scoring pass to Corey Williams to expand the lead to 17-7 with eight seconds left in the half.

“They had thrown two interceptions,” Sanders said. “You think they’re going to drive 60-70 yards? Guess what? They did. That’s on me. I believe in my guys to a fault.”

Odums saw the opening Sanders gave him and seized on it.

“When I got the play count, I said ‘Let’s go answer’,” Odums said. “The plays were there to be made. John came in, executed the drive and led us to a touchdown. We didn’t bench Ladarius. We had a plan for both of them to play anyhow. Both executed the plan. Other than the two interceptions, I thought Ladarius played well, too. We have weapons, and we try to utilize all of them.”

After the game, Odums was his usual self, wanting to get through media obligations as quickly as possible. Sanders intentionally extended his post-game news conference because “I’m having fun,” and he wanted to keep talking.

Since taking the job, Sanders does sound sincere in his mission to restore Jackson State to prominence, and he has the charisma and resources to accomplish it.

“I take total responsibility for every durn thing that transpired today,” he said. “I’ve got to do better. We have to prepare better. We had two durn weeks and we still didn’t look like we were prepared. We looked like we just didn’t have it.”

If Sanders wants a model to follow, he could do a lot worse than to look at what has happened the past nine years at Southern.