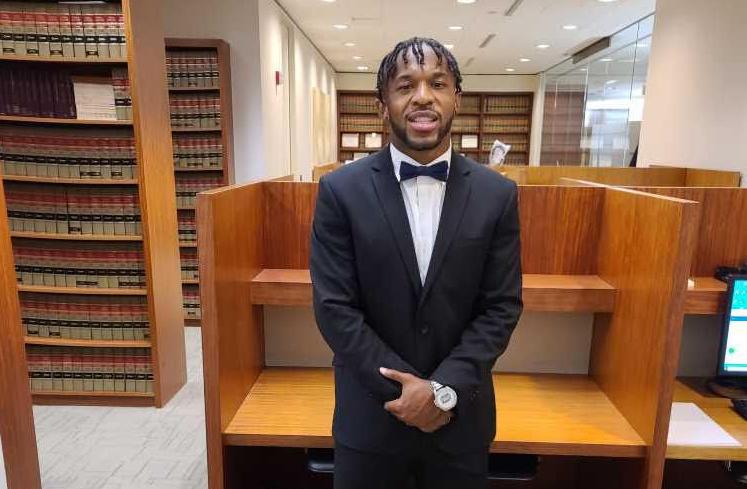 Kordell Caldwell is balancing his time as a second-year law student at Southern University and a defensive back on the football team. 'He always puts his books first, and he’s always on us about understanding how important school is,' teammate Jakoby Pappillion said 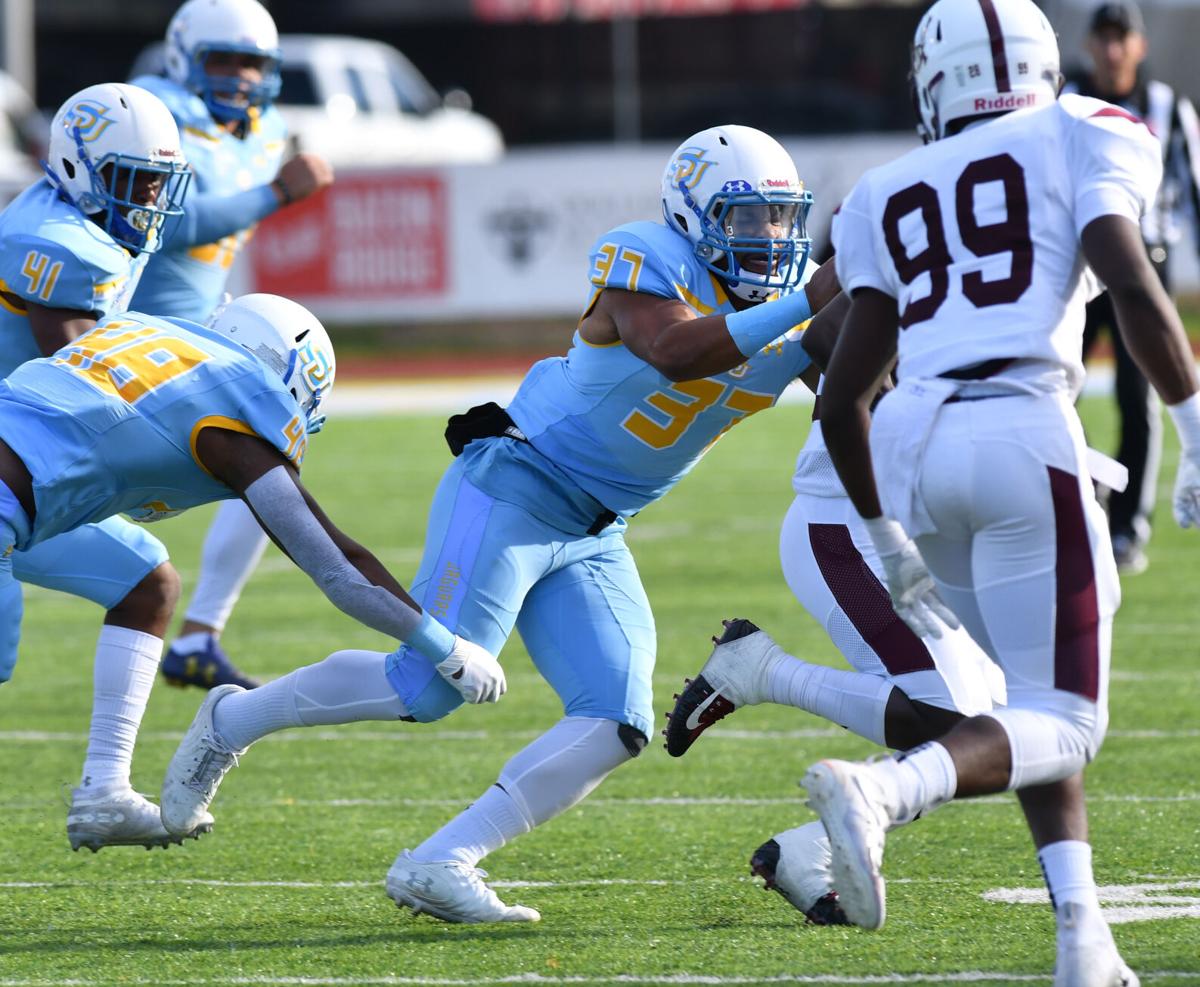 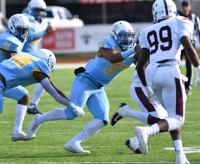 Southern defensive back Kordell Caldwell grabs reaches to make a tackle on an Alabama A&M ball carrier during a game Nov. 2, 2019, at A.W. Mumford Stadium. 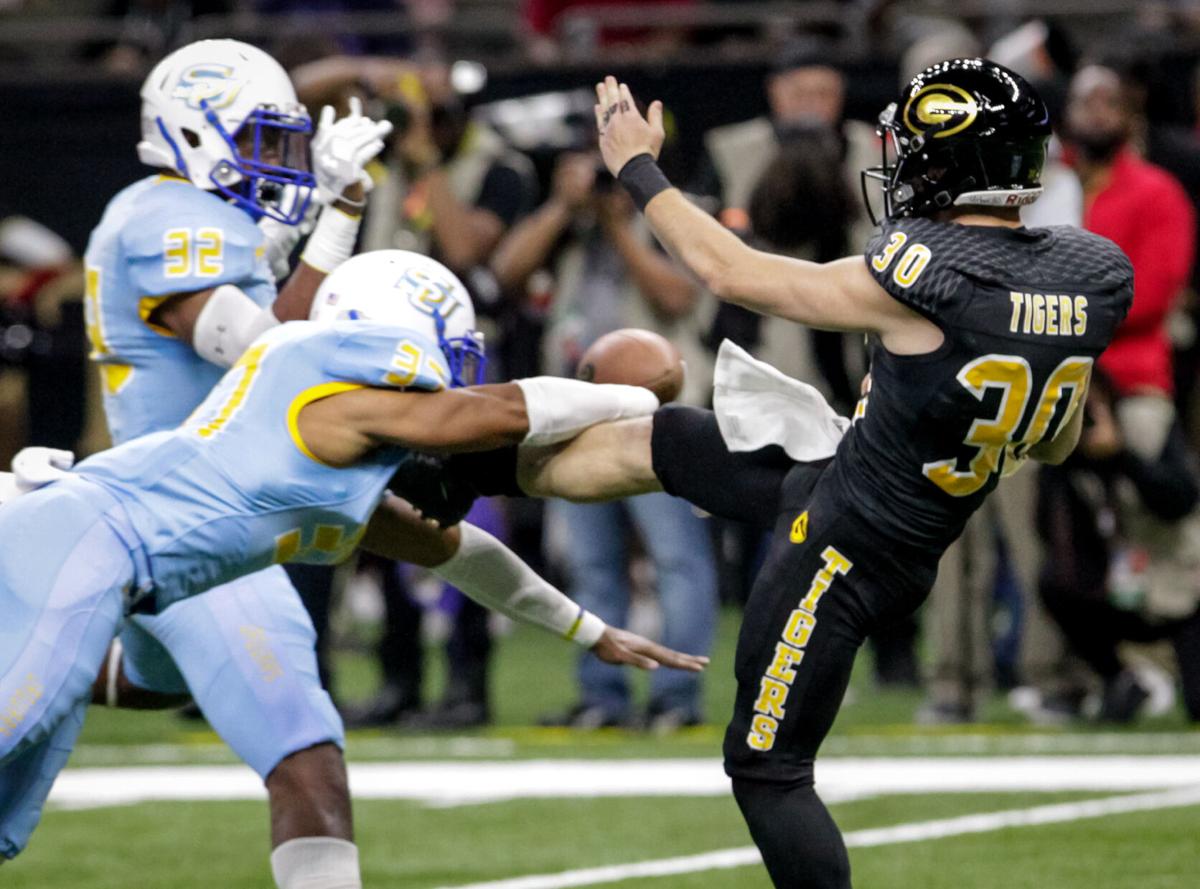 Southern safety Kordell Caldwell blocks a punt by Grambling kicker Garrett Urban during the Bayou Classic on Nov. 24, 2018, at the Mercedes-Benz Superdome.

Kordell Caldwell is balancing his time as a second-year law student at Southern University and a defensive back on the football team. 'He always puts his books first, and he’s always on us about understanding how important school is,' teammate Jakoby Pappillion said

Southern defensive back Kordell Caldwell grabs reaches to make a tackle on an Alabama A&M ball carrier during a game Nov. 2, 2019, at A.W. Mumford Stadium.

Southern safety Kordell Caldwell blocks a punt by Grambling kicker Garrett Urban during the Bayou Classic on Nov. 24, 2018, at the Mercedes-Benz Superdome.

On summer vacation in 2008, 10-year-old Kordell Caldwell had just finished a visit to the Texas State Capitol in Austin with his parents.

As they walked away, two black SUVs pulled up to the capitol building, and out stepped then-Gov. Rick Perry with his traveling party.

Intrigued, Caldwell wanted to meet him, but his parents said it probably wasn’t a good idea to try a cold introduction.

“But isn’t he the governor for the people?” Caldwell asserted.

“We had nothing better to say than, ‘OK, go,’ ” his father William said, laughing.

Using athleticism that would soon serve him well, Caldwell sprinted ahead of his parents and made his request. After speaking to the governor’s press secretary, he eventually wrangled a handshake and photos with Perry.

It wasn’t the first time Caldwell talked his way into — or out of — an opportunity with his precocious gift of gab. Nor was it the last.

Twelve years later, Caldwell’s speaking skills have grown into a fierce determination to become a lawyer, with an equal yearning to max out his athletic career.

A fourth-year junior defensive back on the Southern football team, Caldwell is also a second-year student at the Southern University Law Center, pulling and extremely rare double for any college athlete in the U.S.

With Southern set to attempt a spring football season in 2021, Caldwell is in the hunt for a starting job after two seasons as a reserve. In law school, he’s No. 1 in his class with a cumulative 3.94 GPA.

“It’s a very big challenge, a lot of sacrifice. But this was something I really wanted to do,” Caldwell said. “It’s important to me. I use one to balance out the other. I go from studying and cramming my brain, and then now I’m going to turn on some film, use that to relax from studying, dig into it. After I get as much football as I can, I move on to another law class I need to work on.”

His days are packed with both tracks, and there’s little time for a social life, a tradeoff he’s happy to make. Especially with college football struggling to work around COVID-19 pandemic protocols, limiting options is a plus.

Still, it isn't easy. Coaches and teammates marvel at the task Caldwell has tackled and his approach to it.

“If this is on your résumé, you should go to the front of the class,” Southern coach Dawson Odums said. “It’s something very few will do.

“The No. 1 trait that defines him is his unbelievable work ethic. He has a high football IQ, one of the most intelligent players I’ve been around. Serving double duty as a football player and law student says a lot about him.”

Fellow defensive back Chase Foster has roomed with Caldwell on occasion and could see quickly he wasn’t an average student-athlete.

“He was always in his books, a lot of studying,” Foster said. “He doesn’t like to get behind in his work. He’s dedicated to anything he does.”

Caldwell doesn’t allow his bookish ways to alienate him from teammates. He does get his share of ribbing — they call him "Smart Guy" — but with a heaping dose of respect.

“It was all fun and games at first, but he really is (who he seems) on and off the field,” defensive back Jakoby Pappillion said. “He always puts his books first, and he’s always on us about understanding how important school is.

“He’s a good teammate and good friend. He doesn’t just say it; he shows it by example, the way he carries himself every day. That’s a great dude right there.”

The path to Southern

Caldwell, an only child, grew up in Allen, Texas, near Dallas, but he moved to Houston the summer before eighth grade and attended Pearland High School. He was an Arizona State football walk-on and left after two seasons.

It was a surprise that he turned down Texas, his “dream school,” athletically and academically.

“My first baby picture was of me doing ‘Hook ‘em Horns,’ so it might have seemed I was destined to go there,” he said. “But two years of undergrad and spending time at the Southern Law Center — they took me in like family — it became too easy to make a decision to stay here. I got to know some of the faculty and Chancellor (John) Pierre. I would have had to give up football.”

Caldwell (5-foot-10½, 188 pounds) has made the most of his limited opportunities on the field since becoming a Jaguar. He blocked and recovered punts that led to touchdowns against Grambling (2018) and Prairie View (2019), the latter Sabrina’s alma mater.

“He picked that game to show out with all my friends there,” she laughed.

He also got his first career interception against Edward Waters last season and has an opportunity to move into the starting lineup with two starting safeties gone from 2019.

“It’s all about opportunity,” he said. “I’m going to show up every day, give it all I’ve got and let the chips fall where they may.”

Caldwell was always good in whatever sport he was playing but made an even bigger impression on people with an innate ability to argue a point with civility, even as a young child.

As a 6-year-old, he foreshadowed his meeting with the Texas governor in Washington, D.C., by trying to talk his way into a White House tour, reasoning with security guards that his parents were “good people.” He asked that they “allow them in any time they want” when he returned as President of the United States.

While growing up, William and Sabrina stressed education through reading. Caldwell wasn’t allowed to play sports for the week if he brought home anything less than a B-plus. Law school became a topic of conversation long before most kids even understand the concept.

When Caldwell spoke in front of other adults, his parents got looks of amazement and envy at his poise and vocabulary. In sixth grade, Sabrina bought him a copy of “The Reversal,” the third entry in the series by Michael Connelly that began with “The Lincoln Lawyer,” which further deepened his interest.

“I had friends look at me and say, ‘this boy is not a child,’ ” Sabrina said. “He picked a position and once he knows it’s the truth he’s going to argue until you understand ... ‘Let me explain to you why it’s this way.’ I would think, ‘How did you even come up with that?' He would blow us away.”

Before high school, Caldwell attended summer law camps at Duke, SMU and Stanford before high school, where he participated in mock trials. He wasn’t on the debate team at Pearland but took an American Government AP course a year early.

Last summer, Caldwell had an internship at the New Orleans law firm Irwin, Fritche, Urquhart and Moore, LLC, and has been invited to return in 2021. He said he’s leaning toward civil litigation rather than trial law and expects to stay in Louisiana, possibly the New Orleans area, “and let my career flourish from there as I develop.”

But Caldwell is serious about his unfinished football career. He misses running out of the tunnel because of the postponement of the fall season. He is eager to squeeze every drop from his remaining eligibility.

“Having two years left to play and the bond I built with my teammates, when the opportunity was there I was ready to jump at it,” he said. “If I wasn’t impressed with the Southern Law Center, it would have been a tough decision to move on. It’s a great opportunity. I get to do what I love for two more years.”