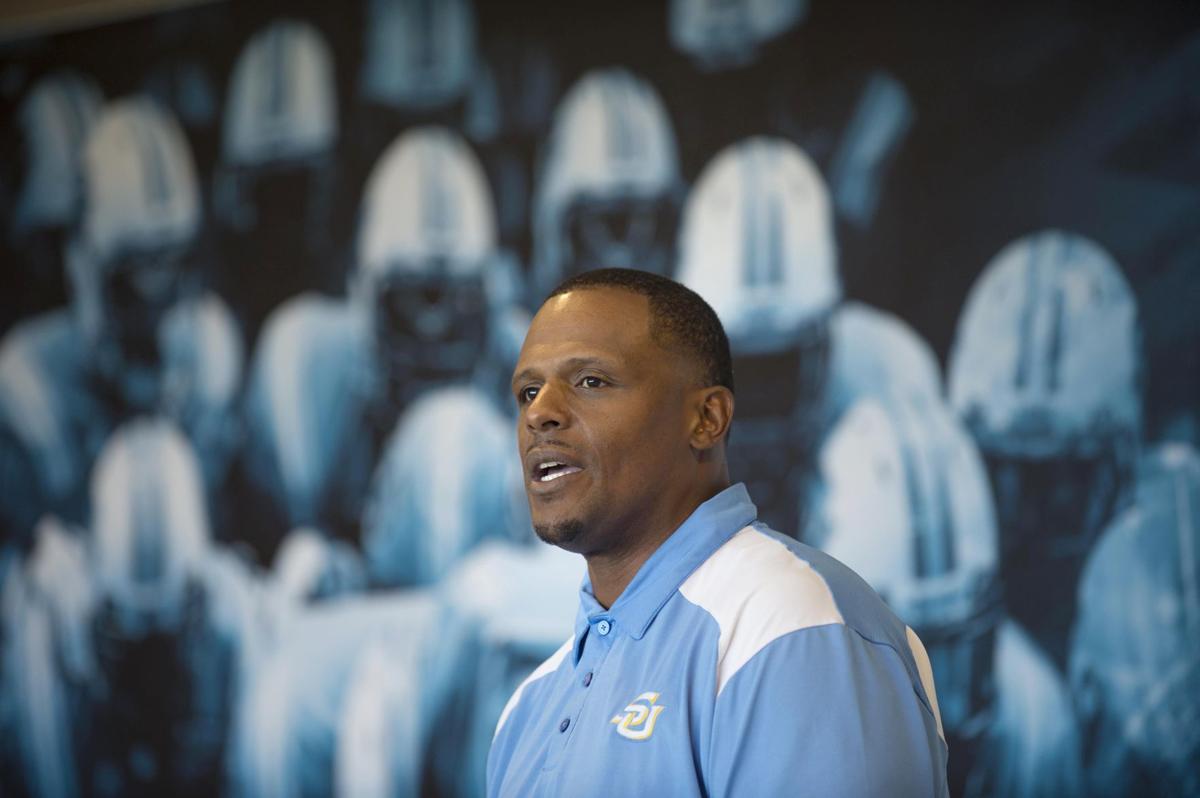 Southern offensive coordinator Chennis Berry speaks at a morning press conference on July 28, 2017. Berry is leaving the school to become the head coach at Benedict College in Columbia, South Carolina. 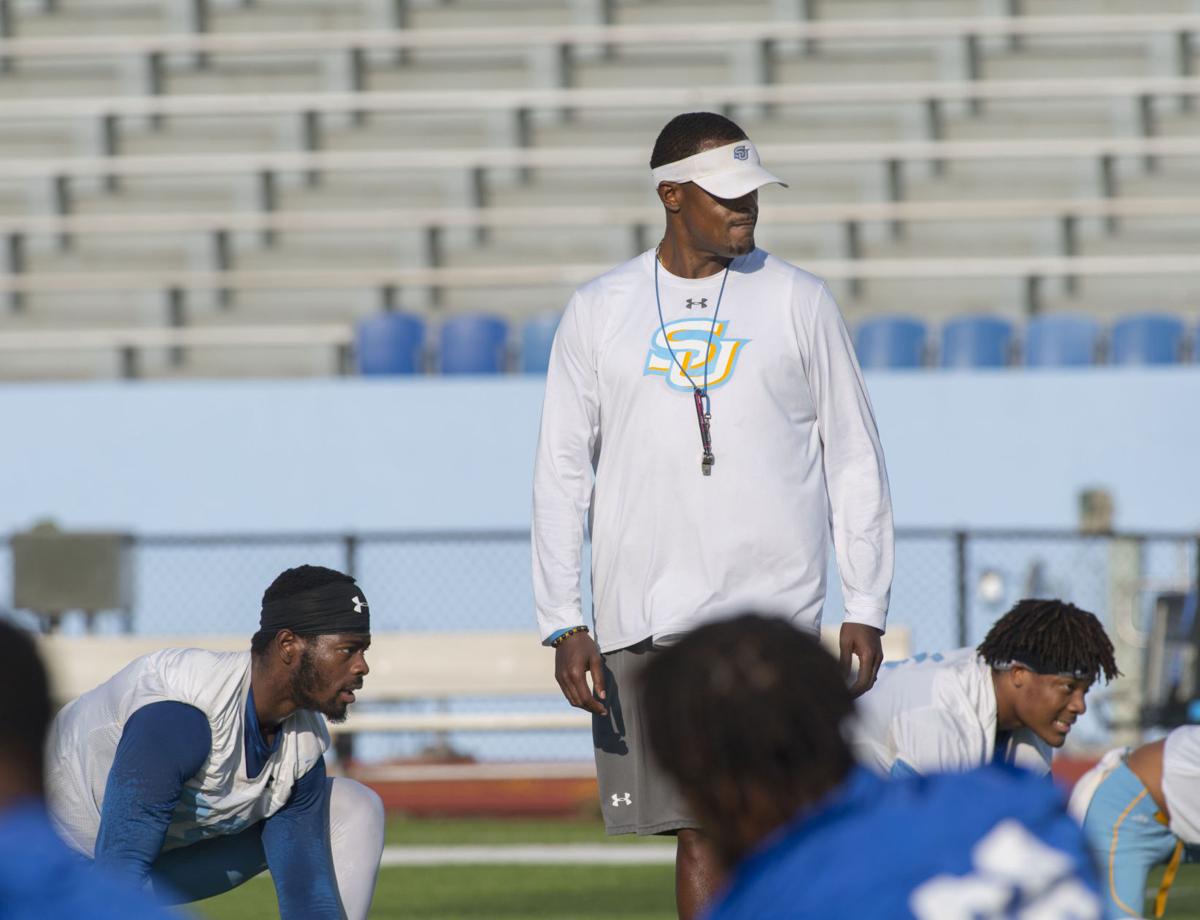 Southern offensive coordinator Chennis Berry speaks at a morning press conference on July 28, 2017. Berry is leaving the school to become the head coach at Benedict College in Columbia, South Carolina.

Longevity is rare for college head coaches on any level, and Southern coach Dawson Odums will tell you he’s been blessed to enter the 2019 season, his eighth, as the dean of Southwestern Athletic Conference coaches.

If you ask Odums how he’s done it, one of his first answers would be having a strong right-hand man.

Offensive coordinator Chennis Berry has been a rock for Odums, who hired him in his first full season as head coach and hasn’t looked back.

That seven-year partnership of a defensive-minded head coach and offensive guru delivered a SWAC title in its first season and is aiming for another as the Jaguars begin game week for their season opener Saturday at McNeese State.

The two connected first on staff at North Carolina A&T in 2009-10 where they went head-to-head in practice as coordinators. When Odums was hired as the full-time coach following a successful interim stint in 2012, he reached out to Berry, who had spent two seasons at Howard University.

They’ve been together since.

“We clicked well; he’s a D-line guy, I’m an O-line guy,” Berry said. “I love his work ethic and attention to detail. I knew he was going to run and lead a program of discipline, accountability and hard work, spiritually as well. I knew this program would be on a good foot.

"It’s been a blast, being around good people. Coach Odums is a great man, a good person with a good staff. That’s grounds for success. When you work with good people, you want to come to work every day.”

With Berry, Odums sees a mirror image of himself, someone he can turn loose with the offense and trust. Coaching staffs turn over on an annual basis, and Berry has given Odums stability as the last remaining member of his original staff.

“He’s an unbelievable line coach with a great work ethic and organizational skills,” Odums said. “He’s everything you want. He runs that side, and I don’t really mess with him. I believe in what he’s doing. Our visions go hand in hand. It’s hard to find that recipe.”

The duo sets a strong example for younger coaches who populate the Jaguars staff. Instead of arguing or creating tension, the pair works in concert. Their familiarity keeps everyone focused on the proper priorities.

“He and coach Odums have a great bond,” running backs coach Ashton Warner said. “In staff meetings, they almost operate like brothers. It goes beyond football; it’s a true friendship. When you have someone you trust it creates a sense of comfort. That’s where they are.”

As associate head coach, Berry has about as much free reign as any assistant in the country. He’s the kind coaches love to learn from and players love to play for. When those around them see the teamwork Odums and Berry display, it goes viral among the team and coaching staff.

When it comes to management style, Berry is no mystery.

“He’s a juice guy, full of energy,” Warner said. “He’s not laid back at all. Nine times out of 10, you’ll hear him before you see him. He’s hard-nosed about doing things the right way. He has his moments when he’s chill, where he’s excited with the players and high-fiving.

The players would agree. Berry is the position coach for the offensive line as well as coordinator and teaches them more than how to block.

“He feels we are a reflection of him, so we come out with great energy and make sure we have great focus and attention to detail,” senior center Jaylon Brinson said. “His style is focused, attention to detail and making sure we get off the ball.

“He likes to teach the entire play. He likes for us to know what the other positions players like running backs, wide receivers and tight ends are doing. It helps us play better as a group.”

When Odums is away, he’s comfortable leaving Berry in charge.

“If I’m not around, he’s the guy who will do whatever needs to be done," Odums said. "We bounce ideas off of each other. I make suggestions. We have a system in place of what we want to do and how we want to do it and we stick to that system.”

A native of Cleveland, Ohio, who grew up in Atlanta, Berry has a wide range of experience. He played college ball at Savannah State and interned with six NFL teams. He’s had two stints at North Carolina A&T (2003-05, 2009-10) sandwiched around a gig as offensive coordinator at Morgan State (2006-08).

Before North Carolina A&T, Berry had stops at Morris Brown, Kentucky State and Fort Valley State. His résumé makes him an attractive candidate to move up to his first head coaching job. He’s had some nibbles but nothing that could beat working on the Bluff.

“I’ve had opportunities but it wasn’t the right fit,” he said. “I’m happy being the offensive coordinator at Southern. The timing and situation has to be right. I enjoy working with coach Odums and staff.

“Baton Rouge is a great city, they love football. It’s important. Southern fans are amazing, they travel well. It’s been fun, a fun place to coach.”

The Odums-Berry duo could be combining for their best season yet. The Jaguars have a wealth of talent, experience and depth at every position led by coaches who already know the way.

“It’s one of the better situations I’ve been in since I’ve been here,” Berry said. “We’re deep at every position and we’ve got some explosive receivers. Now we’ve got to put it all together. Talent is one thing, but we have to be disciplined in our assignments and accountable.”