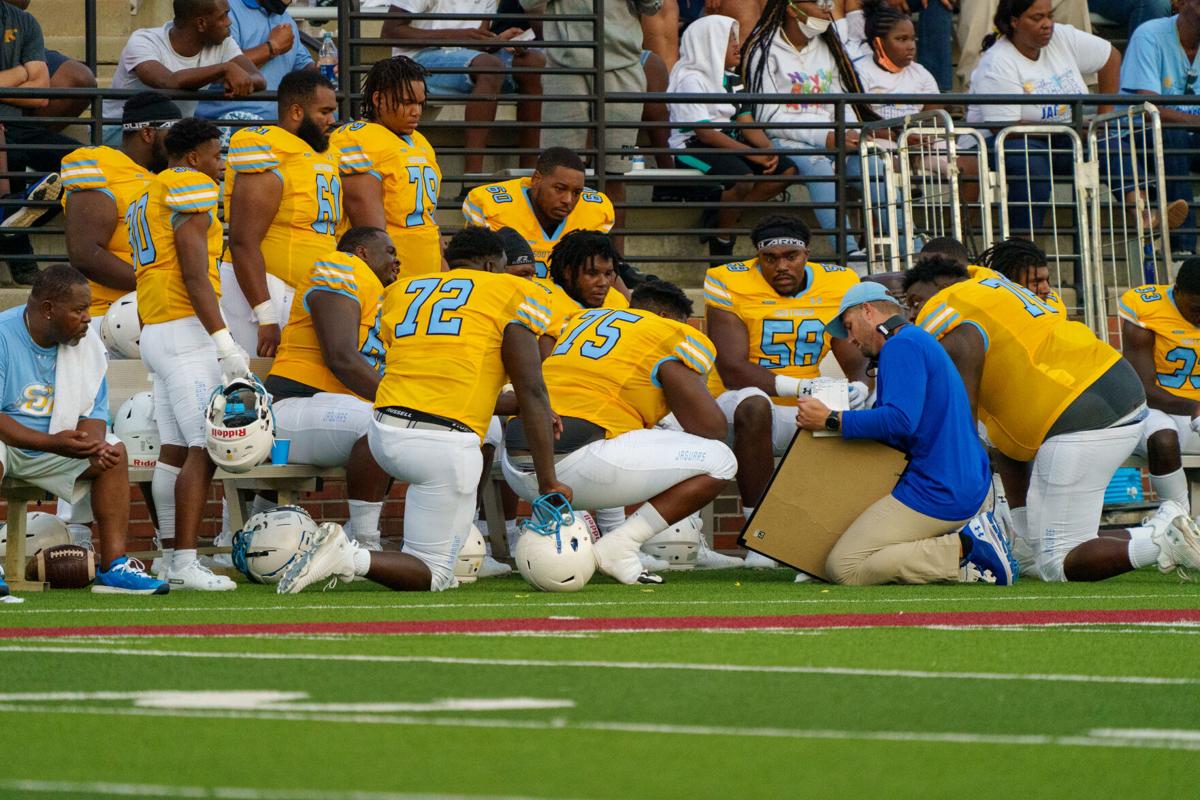 Southern matched up against Troy for the season opener in Troy, Alabama Saturday, Sept. 4, 2021. Troy defeated the Jaguars 55-5. 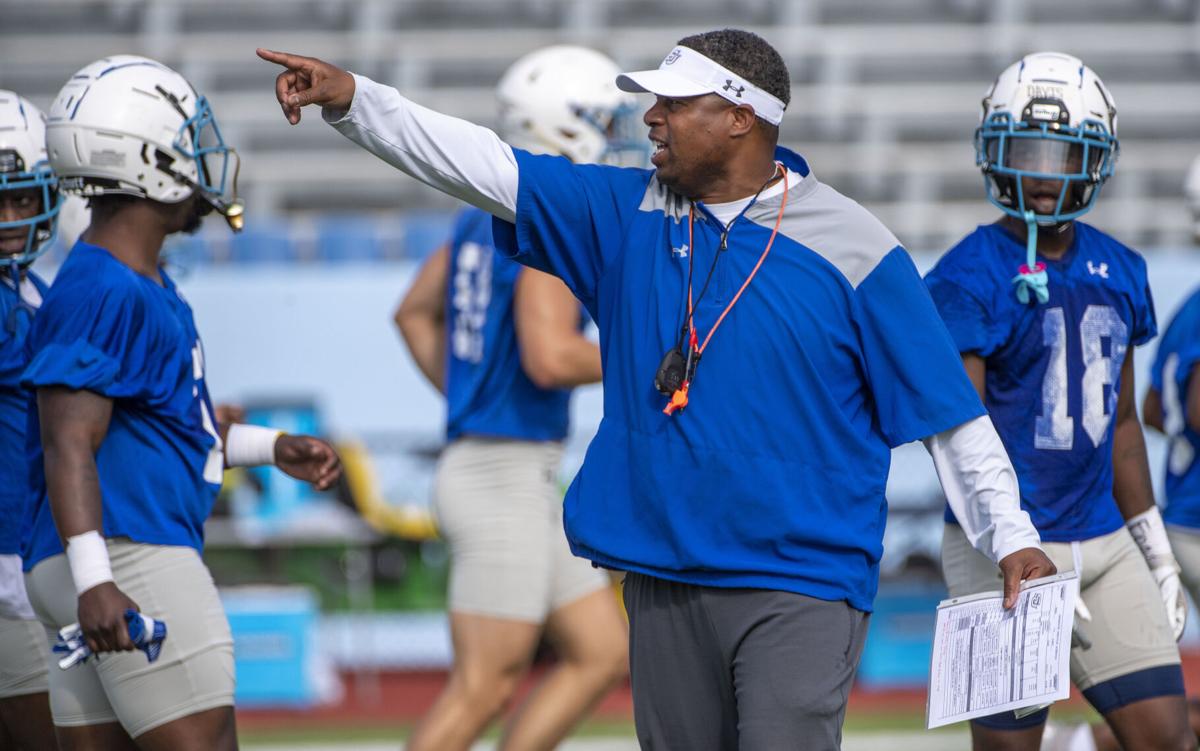 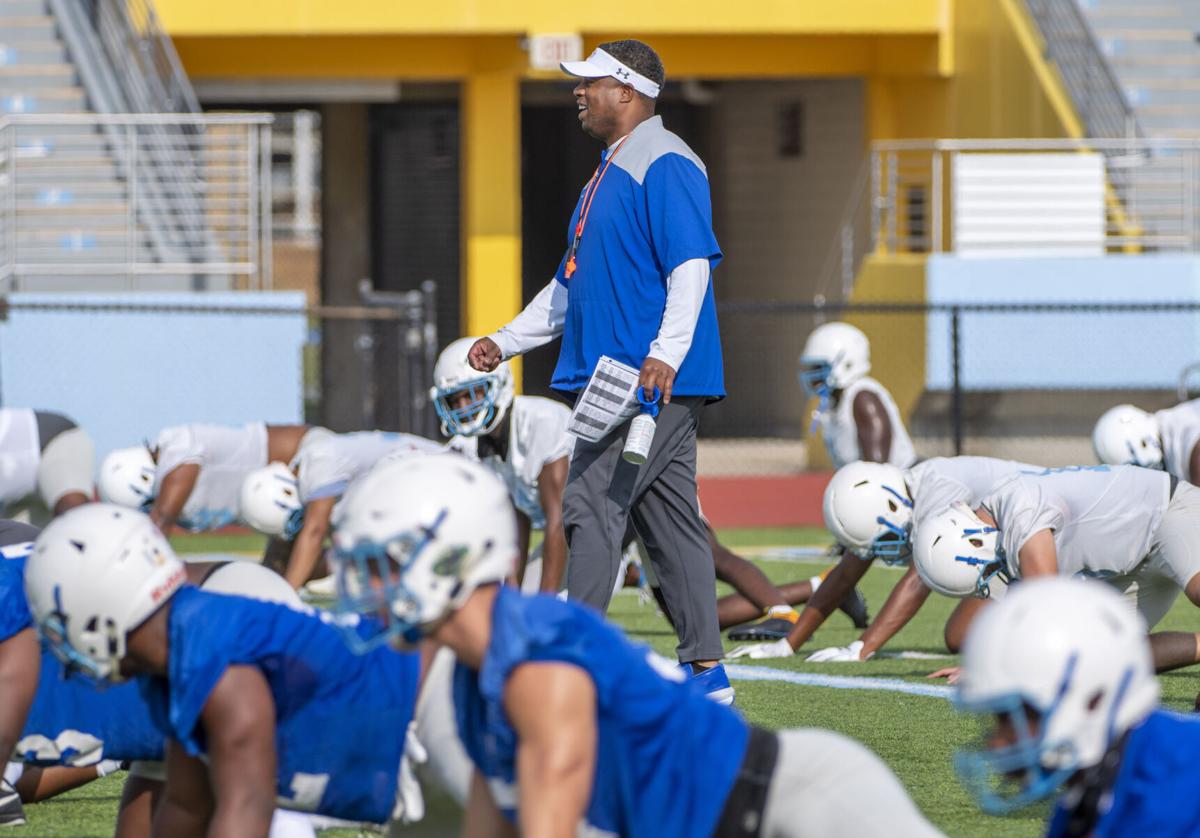 Southern matched up against Troy for the season opener in Troy, Alabama Saturday, Sept. 4, 2021. Troy defeated the Jaguars 55-5.

When viewed from afar, the 55-3 score from Southern’s season opening was ugly, especially in comparison to other SWAC team season openers. The stat line comparisons were brutal, too.

But viewed close up, under the microscope in the Jaguar Field House film room, the beauty of Jason Rollins' first effort came into focus.

“We played a full four quarters,” Rollins said at his weekly news conference Tuesday. “There were no loafs, no giving up. The score wasn’t reflective of how we played. It gets out of hand when you turn the ball over four times.

“There were a lot of teachable moments in that game. You don’t normally make your biggest jump until your second or third game, when you see the things you need to work on and get better at. When you go against an opponent teams that scout you see your weaknesses and strengths. We want to dissect this film and correct ourselves moving forward.”

Rollins admits his team needs to show improvement, especially of a rock-solid Division II opponent coming in. Miles College took Alabama State into overtime and lost by one point on a blocked extra point. The Jaguars and Golden Bears meet at 6 p.m. at Mumford Stadium in the Pete Richardson Classic on Saturday.

Rollins was particularly pleased with the play of his offensive and defensive lines. Davin Cotton had three tackles and an interception, but his play forced Troy out of its Air Raid set and into a two-tight end formation for maximum pass protection.

Until that change, Southern was getting a decent pass rush. The Jaguars finished with no sacks and one quarterback hurry.

“We battled them up front,” he said. “Normally, when you play FBS vs. FCS, there’s an advantage for those schools in the trenches. I thought we played well on the offensive and defensive lines. Also, (on) special teams we held our own punting and kicking, and we blocked a PAT.

“Davin Cotton was a force inside. He pushed the pocket so much inside it made for a short edge. Troy hasn’t played with a tight end the last three or four years. They played 17 snaps without one and with two tight ends on the field for most of the game.”

Troy chipped away at the Southern defense early but the Jaguars allowed only two explosive plays of 30 yards or more. Three times missed tackles allowed the Trojans to convert on third down, where they were successful seven of 11 chances.

Robert Rehm got the block on the PAT while Martell Fontenot made a 31-yard field goal and punted five times for a 34-yard average, but none were returned. Freshman kickoff man Joshua Griffin got touchbacks on both of his kickoffs.

Quarterback Ladarius Skelton completed only seven of 11 passes for 85 yards and threw two of Southern’s four interceptions. The first resulted when wide receiver Travis O’Connor fell down just before the pass arrived. Zion Williams easily picked it off and returned the ball for a touchdown.

Rollins said Skelton’s other interception was simply a good play by the defender.

“He threw the ball well and made good decisions in the run game,” Rollins said. “We were pleased with his overall performance.”

Rollins also cited the play of offensive tackle Ja’Tyre Carter, who “protected well against a really good tackle he blocked all night.”

Southern was without five players from their two deep, including three starters. Rollins said he hoped to have wide receiver Marquis McClain, tight end Ethan Howard and defensive end Jalen Ivy back after an “internal matter” that kept them out.

Running back Jerodd Sims also missed the game with a foot injury and reserve wide receiver Corey Williams because of a hand injury. Rollins is hoping to get both back this week.

Miles is coached by Reginald Ruffin, who is in his 10th season and coming off back-to-back Southern Intercollegiate Athletic Conference championships. He’s complied a 59-39 record through nine seasons. Alabama State’s close call with Miles was no surprise to Rollins.

“If you watch the film, you would not take them lightly,” Rollins said. “They’re coming here to win a football game. We’re hungry as well, extremely hungry. We’re going to play hard. They have our full attention.”