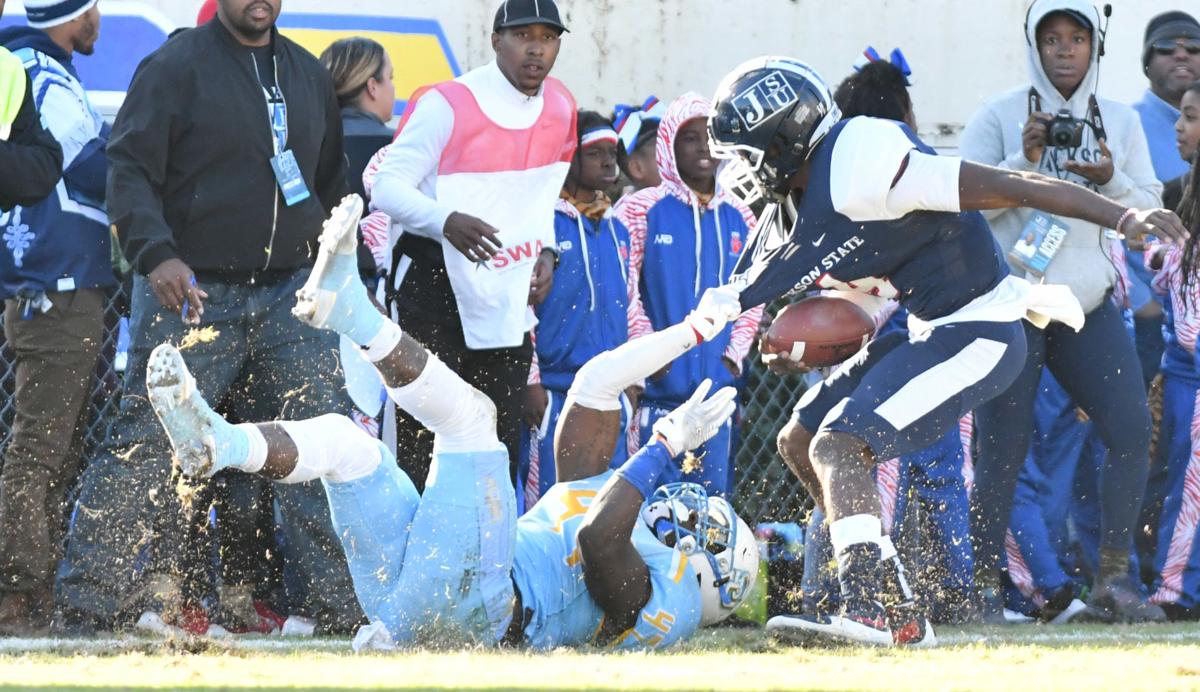 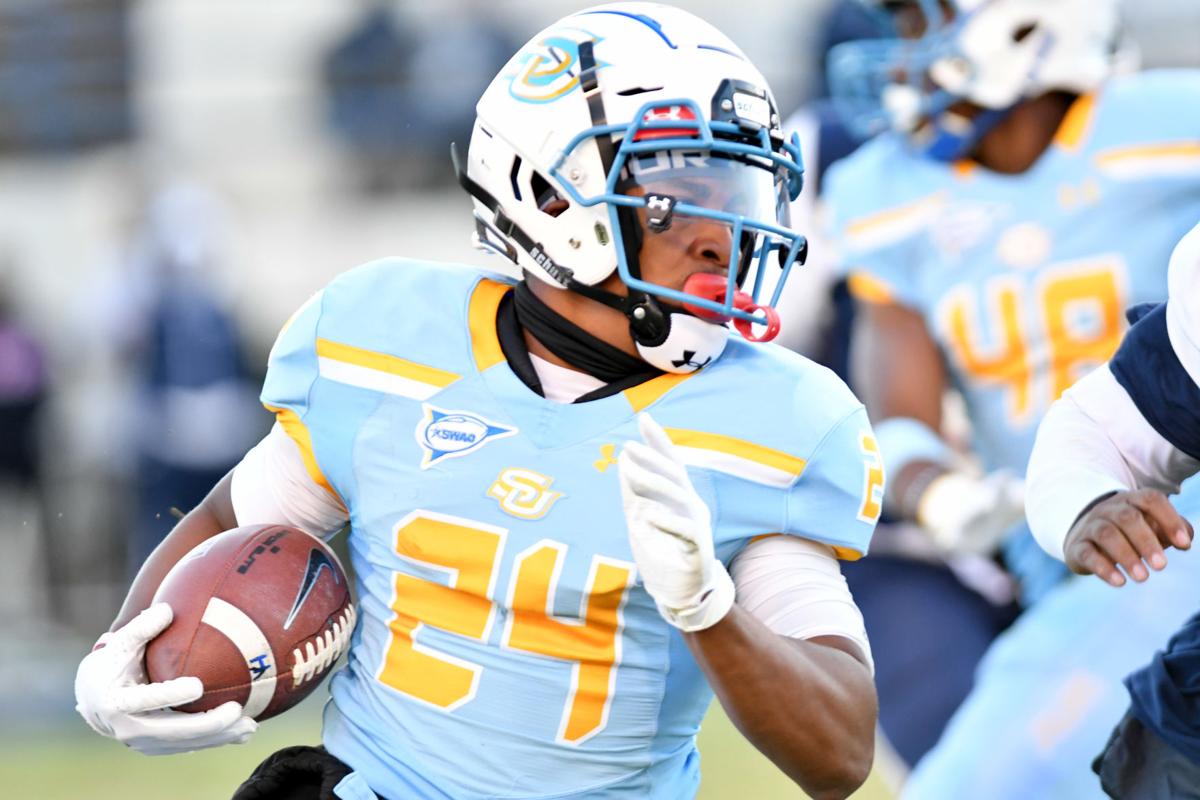 Southern receiver Brandon Hinton looks for somewhere to run after a reception during their Saturday's game with Jackson State at Veterans Memorial Stadium in Jackson, Mississippi. Hinton also had an 87-yard kickoff return for a touchdown during the Jaguars' 40-34 win. 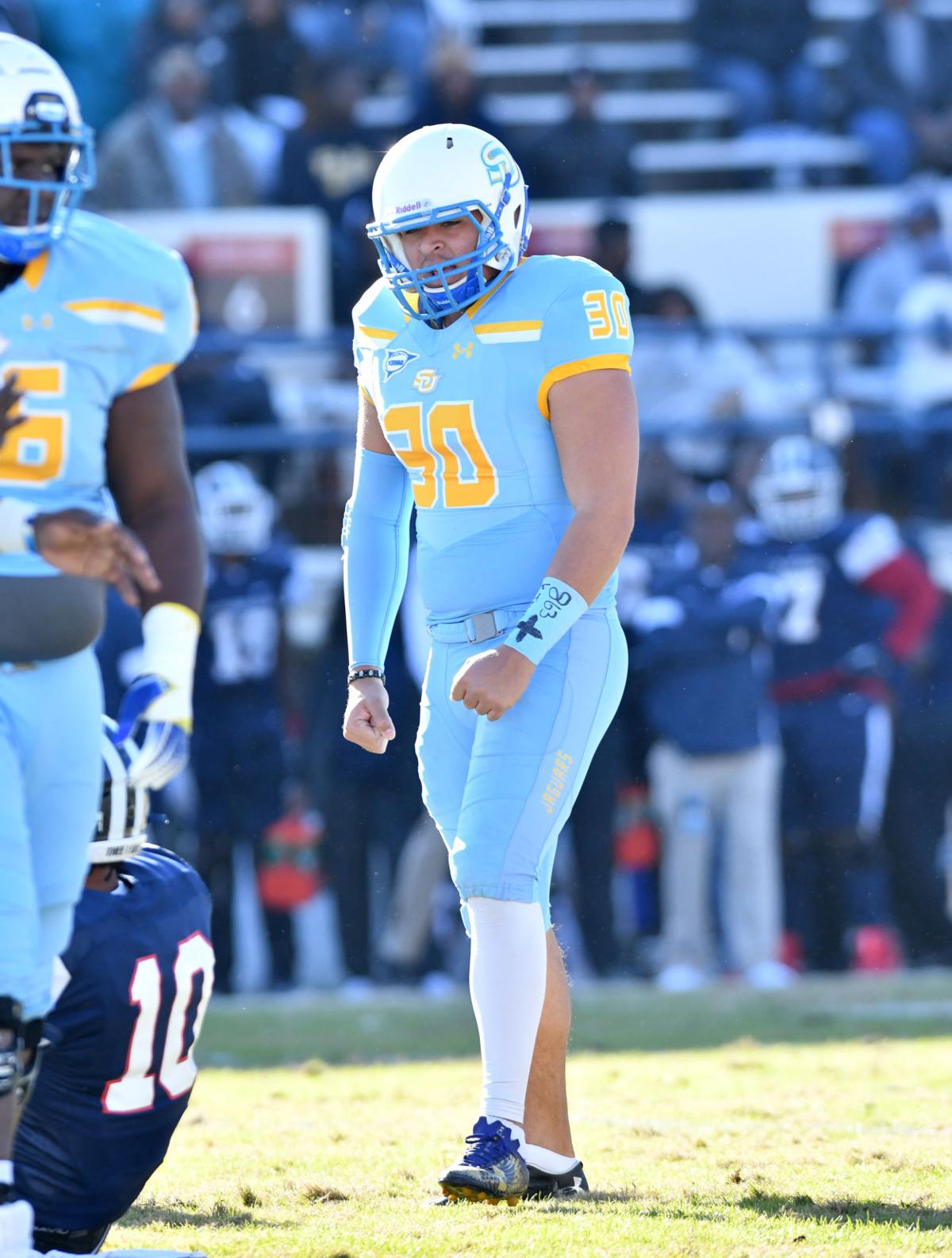 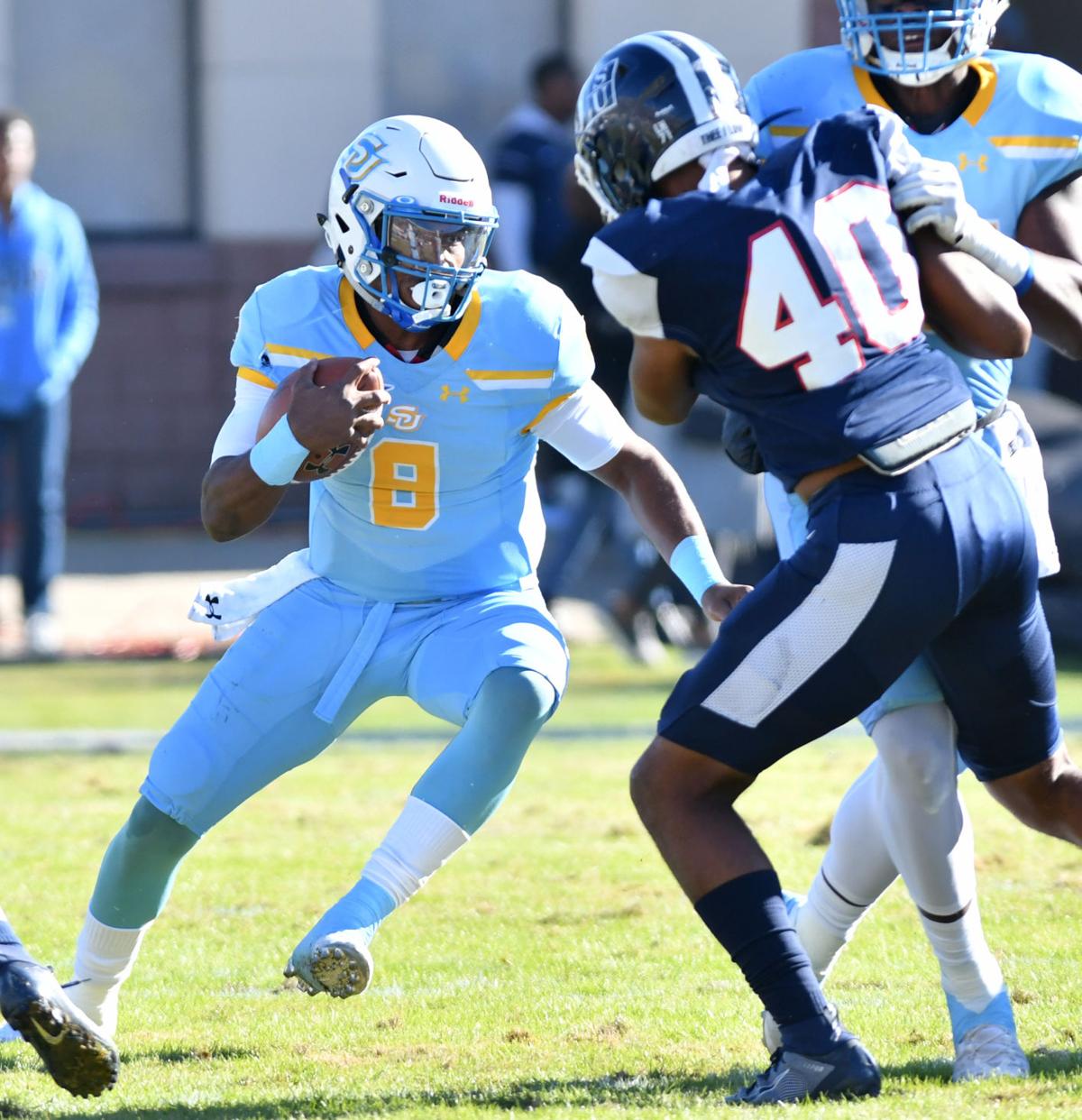 Southern QB Ladarius Skelton looks for somewhere to run during their game Saturday with Jackson State at Veterans Memorial Stadium in Jackson, Mississippi. 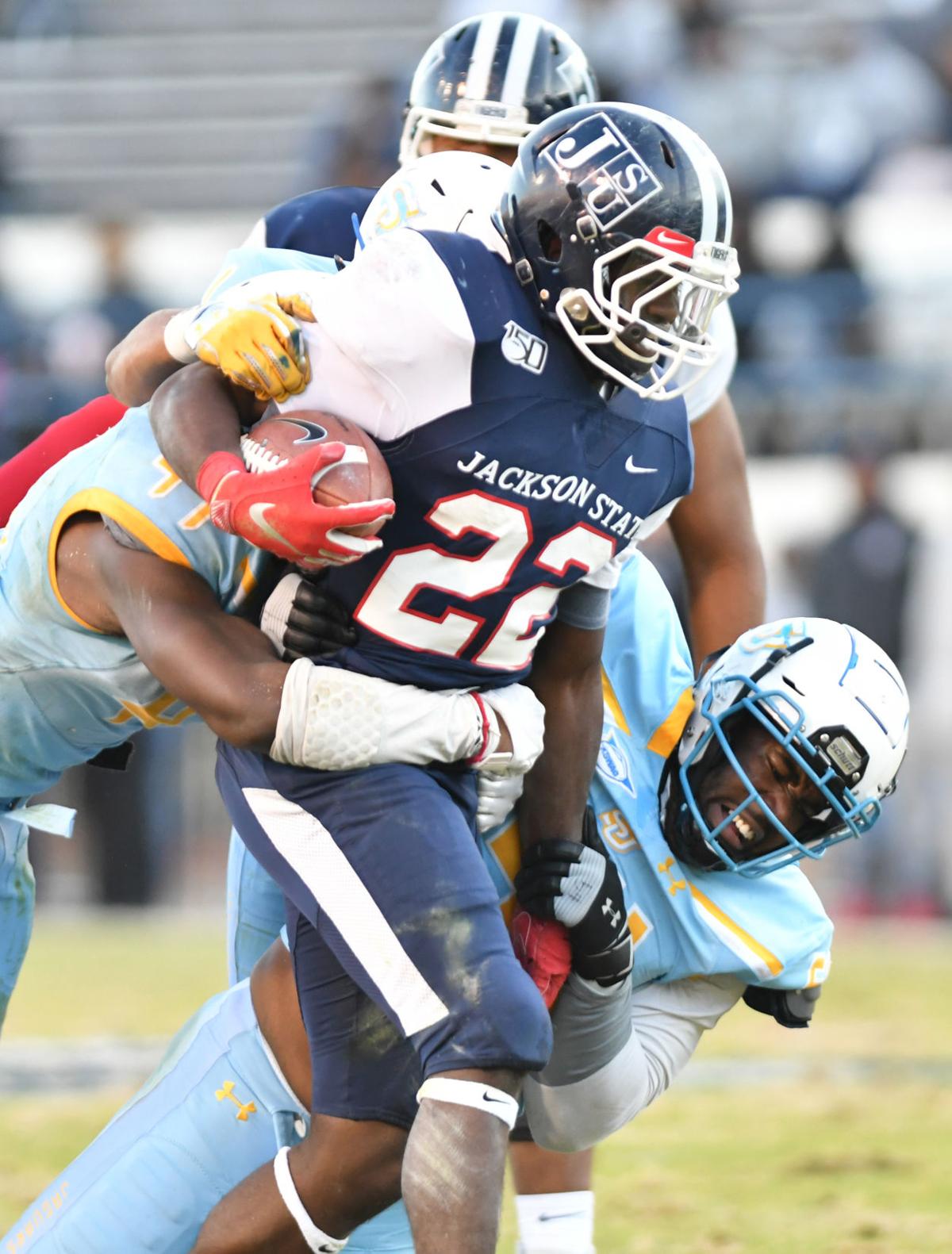 Southern receiver Brandon Hinton looks for somewhere to run after a reception during their Saturday's game with Jackson State at Veterans Memorial Stadium in Jackson, Mississippi. Hinton also had an 87-yard kickoff return for a touchdown during the Jaguars' 40-34 win.

Southern QB Ladarius Skelton looks for somewhere to run during their game Saturday with Jackson State at Veterans Memorial Stadium in Jackson, Mississippi.

JACKSON, Miss. — Once again, the Southern University football future is riding on the Bayou Classic two weeks from now, but that doesn’t mean there was anything easy about getting to that point.

When the Jaguars line up against the G-Men in the Mercedes-Benz Superdome they might be still feeling the effects of Saturday’s knock-down, drag-out, 40-34 victory against Jackson State.

One of Southern’s most heated rivalries lived up to expectations even before warmups. Players from both sides were jawing on the field before the game and there were no handshakes afterward.

In between, there were seven lead changes, the Jaguars top-ranked run defense gave up a season-high 308 rushing yards and the offense sputtered just enough to keep the home team in the game.

But the Jaguars buckled down in the second half, reset themselves and got a jolt from special teams.

Quarterback Ladarius Skelton ran for 171 yards and three touchdowns, including a fourth-quarter TD run that gave the Jaguars a two-score lead with 6:24 left. Brandon Hinton flipped the momentum with an 87-yard kickoff return for a score to give Southern the lead for good in the third quarter.

“What a ballgame,” Southern coach Dawson Odums said. “When you are in these rivalry games you throw records out the window. It’s going to be an unbelievable, competitive battle for 60 minutes. You got to have the will the grit the gut to fight your way to victory.

“We knew we were going to be tested. At the end of the day you just have to find a way.”

Southern (7-4, 5-1 in SWAC play) won their third straight game and clinched a winning record, but not until they solved Jackson State freshman quarterback Jalon Jones, who was making his second career start.

Jones threw for 224 yards and four touchdowns and ran for 105 yards. His last one, a 4-yarder to Ra’Mei Wallace with 50 seconds left was too little, too late, but he kept the pressure on the Jaguars throughout the day.

“He’s an unbelievable talent He’s going to be a fit because he can run. He’s faster than what the film shows. We’re going to be seeing a lot of him. We played much better in the second half and corralled him.”

Southern’s pressure wore Jones down the Jaguars sacked him four times. Jalen Ivy had two among his four tackles for loss and seven stops overall. Datrel Brumfield also killed a Tigers threat with an end zone interception of Jones in the second quarter.

Southern had lots of trouble with running back Keshawn Harper also. He had 208 yards on 22 carries, including runs of 64 and 70 yards. But Southern showed its toughness by holding the Tigers to a field goal after each of those runs.

“We had a misalignment by a linebacker but we fixed that,” linebacker Calvin Lunkins said. “We fixed it. We made some adjustments in the second half. We told ourselves we have to pick it up. It’s going to be on us to decide if we win or not.”

After Harper’s 70-yard run, the Jaguar defense stiffened and forced a 25-yard field goal by JSU’s Zach Gleaton to give the Tigers their last lead, 27-26. But Brandon Hinton gave it back on the next play when he grabbed the kickoff, faked a reverse to a teammate and streaked up the right sideline on an 87-yard scoring play.

It was Hinton’s second consecutive game with a TD return. He took a punt back 43 yards against Virginia University of Lynchburg last week.

Jaguar special teams also benefitted from a JSU punt snap that went over Gleaton’s head and out of the end zone for a safety, and a 40-yard field goal by Cesar Barajas, his third in four attempts from 40 yards or farther. Devon Benn sealed the game when he recovered an onsides kick with 50 seconds left.

“I’m happy for those guys,” Odums said. “That play (kickoff return) changed the game. We took momentum back from them and it was unbelievable execution. Great blocks, great vision, total effort. Coach (Wayne) Cordova works his tail off on special teams.”

Jackson State tried to respond but the Jaguars came up with a fourth-down stop on the next possession. Caleb Carter punched the ball out of Jones hands for a three-yard loss on third down and a host of Haguars gang-tackled Harper on fourth and four.

After an exchange of punts gave Southern the ball at the JSU 39, Skelton capped the drive with a seven-yard keeper to finally give the visitors some breathing room.

Skelton also had a 29-yard scoring run on a fourth-and four play in the first quarter and scrambled 22 yards for another in the third . Skelton’s passing was inconsistent — 12 for 23, 133 yards — but he did hit Hunter Register with a six-yard scoring throw for Southern’s first TD. It was the sixth consecutive game Register has caught a TD pass.

“We knew they were going to play hard and that we had to bring our best,” Southern center Jaylon Brinson said. “We wanted to play a complete game with the effort and discipline we know how to. We did those things today.”

The coming bye week for Southern may not be much of a week off with the Southwestern Conference West Division title at stake.