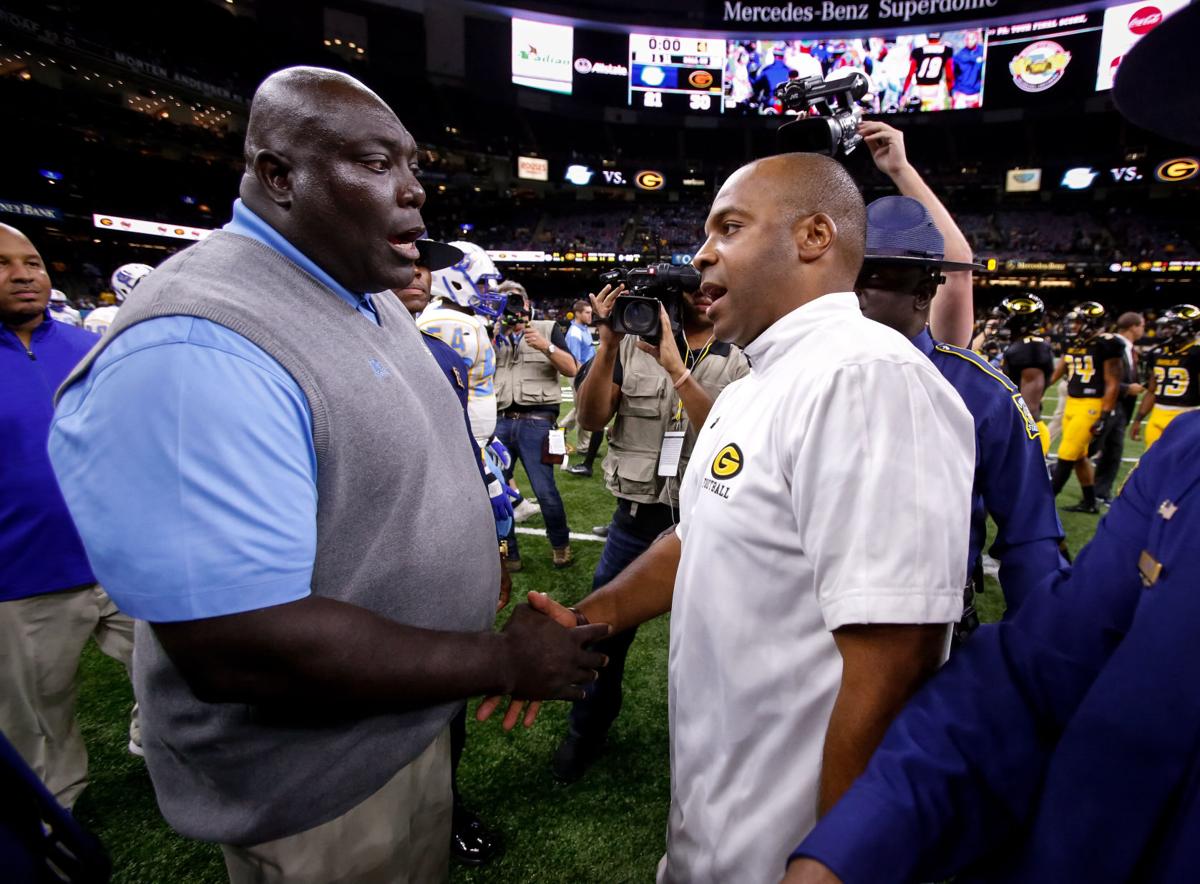 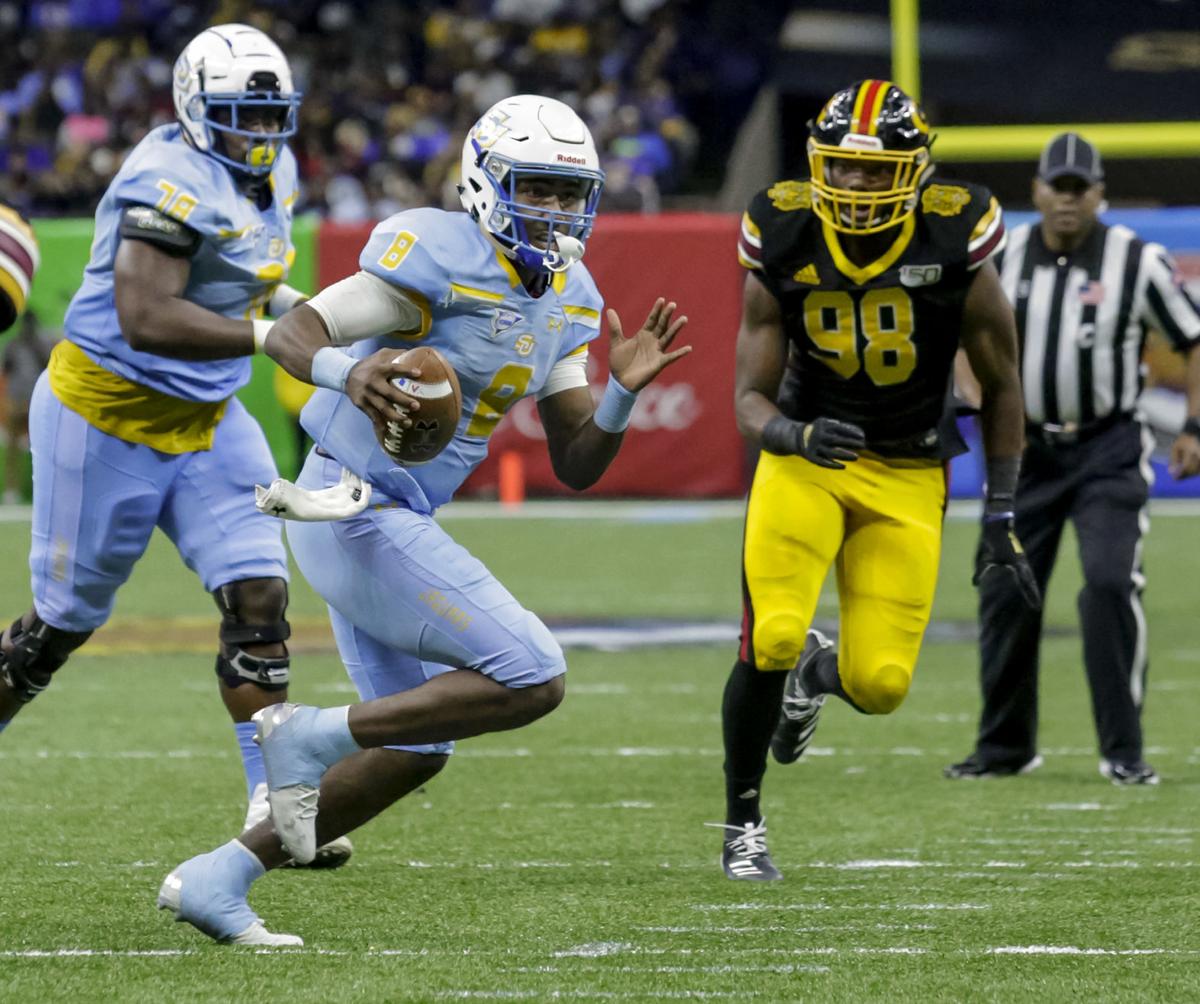 Southern quarterback Ladarius Skelton (8) scrambles out of the pocket as Grambling defensive lineman Cody Dillard (98) closes in during the second half of the 46th Annual Bayou Classic at the Mercedes-Benz Superdome in New Orleans Saturday, Nov. 30, 2019. Southern won 30-28.

Southern quarterback Ladarius Skelton (8) scrambles out of the pocket as Grambling defensive lineman Cody Dillard (98) closes in during the second half of the 46th Annual Bayou Classic at the Mercedes-Benz Superdome in New Orleans Saturday, Nov. 30, 2019. Southern won 30-28.

The 47th Bayou Classic is five months late, but right on time.

The annual meeting between Southern and Grambling on the football field can’t come close to making up for the pain caused by the COVID-19 pandemic here in Louisiana.

It can be a ray of hope and a chance for fans to smile, even with the game moving to Shreveport’s Independence Stadium at 1:30 p.m. Saturday, five hours from its usual home in New Orleans and without its fanfare and traditional band battle.

The Jaguars (3-1) and Tigers (0-3) have slogged through their most difficult season, abbreviated in games but not in effort. They’ve reached the end, looking for something positive going forward.

“No matter where teams are playing, do you know how hard it is to have something to call your own?” Southern coach Dawson Odums asked this week. “This is our own. This belongs to Southern and Grambling, not to the state or anybody. It’s the Bayou Classic, the grandaddy of them all. You have to get excited if you are an alum, regardless of where the teams are or what the records are.

“It’s been part of Louisiana for a long time and hopefully will remain a part. It ain’t Thanksgiving (week), but it’s a Saturday afternoon. Get your popcorn, sit back and let’s enjoy the show.”

Although it’s the last game on Southern’s schedule, the Jaguars' season could be extended. If Arkansas-Pine Bluff loses to Prairie View in a game that kicks off 90 minutes after the Bayou Classic, the Southwestern Athletic Conference West Division title will become less clear. It might force Southern and Prairie View to play their game, which was scheduled for April 10 but postponed because of COVID-19 issues at Prairie View.

The Bayou Classic often determines which team will reach the SWAC title game, but not this year. Grambling is winless. The Tigers have weathered postponements and cancellations of their past two games, plus losing two offensive coordinators and their starting quarterback.

Tigers coach Broderick Fobbs isn’t looking for sympathy. He’s hoping to rally his troops to end the season on a positive note for some kind of momentum going into the fall season. Including an open date, Grambling has gone 28 days without playing a game. It only returned to the practice field early last week.

“Everyone is trying to manage their rosters and keep everybody in-house and not going out and enjoying themselves like they want to. Some of us are doing a much better job than others, and obviously we’re one of the ones that’s not doing as good a job as we need to do.”

COVID-19 issues at Grambling forced the cancellation of games against Alabama A&M and Texas Southern. On top of that, offensive coordinator Mark Orlando resigned March 21, and his replacement, Kendrick Nord, resigned a week later. In the midst of that, starting quarterback Geremy Hickbottom entered the NCAA transfer portal. The Tigers apparently will move forward with transfer Elijah Walker at quarterback.

The Jaguars are on a roll with theirs. Ladarius Skelton has helped engineer two victories after being benched in a March 6 home loss to Arkansas-Pine Bluff. Skelton has 668 yards and five touchdowns rushing and passing combined.

The Jaguars' running game leads the SWAC with 205.8 yards per game.

“Skelton will be ready,” Odums said. “He had a good bye week and a good practice (Monday). I’m glad we have experienced players on our team like Ladarius who can help us and guide us through whatever storm we face. He’s good, and he’s getting to play his best this season.”

For Grambling, CJ Russell and Keilon Elder have combined to rush for 243 yards and three touchdowns. In his limited playing time, Walker has completed 21 of 38 passes for 267 yards and one TD. The Tigers defense has not been sharp, allowing 32.7 points and 427.3 yards per game, the latter stat the second-worst in the conference.

“We know we have a great opponent we are going to play Saturday, a team we highly respect," Odums said. "They have talent. Throw records out the window. They are a well-coached team and will be organized and structured. We know it’s going to be a street fight. You’re going to have to play and let the play do the talking for you.”

Walker: Bayou Classic away from New Orleans feels weird, but SU coach Dawson Odums making most of it

Doug Williams knows things would've been a lot different in his household this week if it was late November instead of the middle of April.