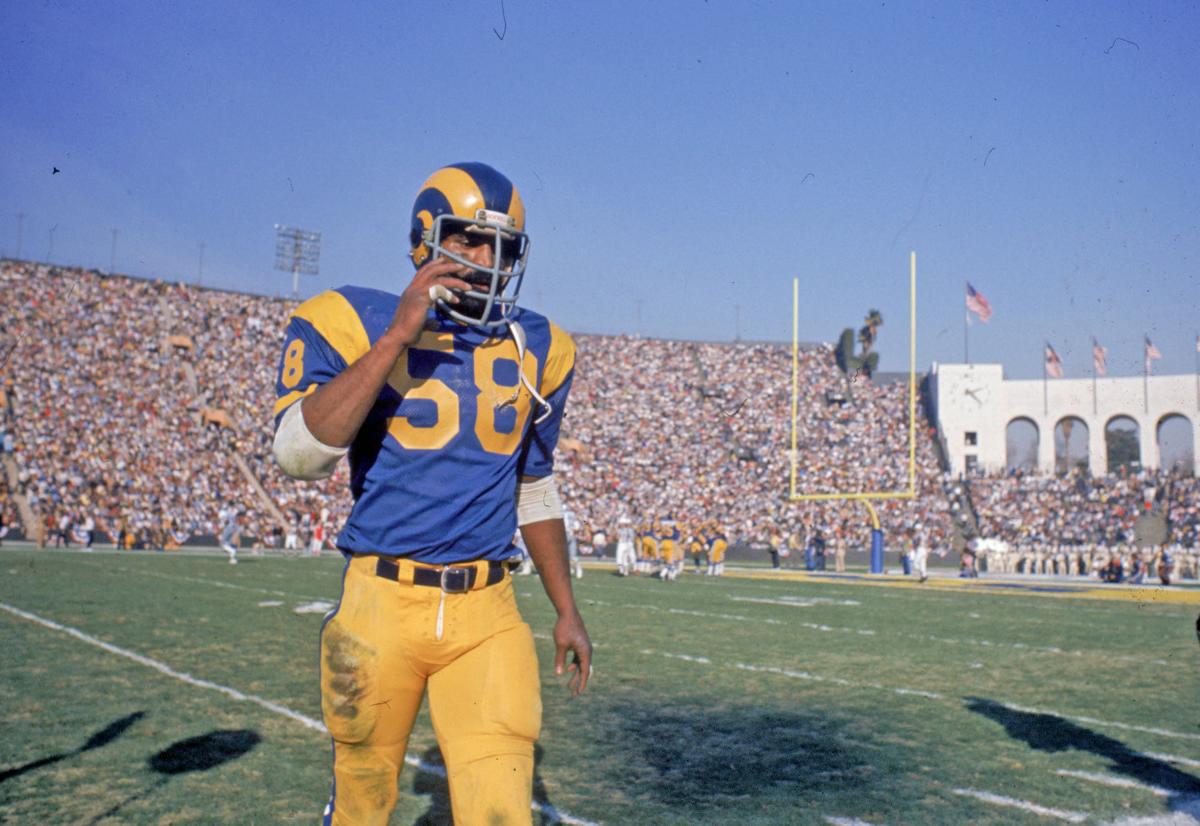 Los Angeles Rams linebacker Isiah Robertson walks to the sideline against the Dallas Cowboys in the 1975 NFC Championship Game at the Los Angeles Memorial Coliseum on Jan. 4, 1976. The Cowboys defeated the Rams 37-7. 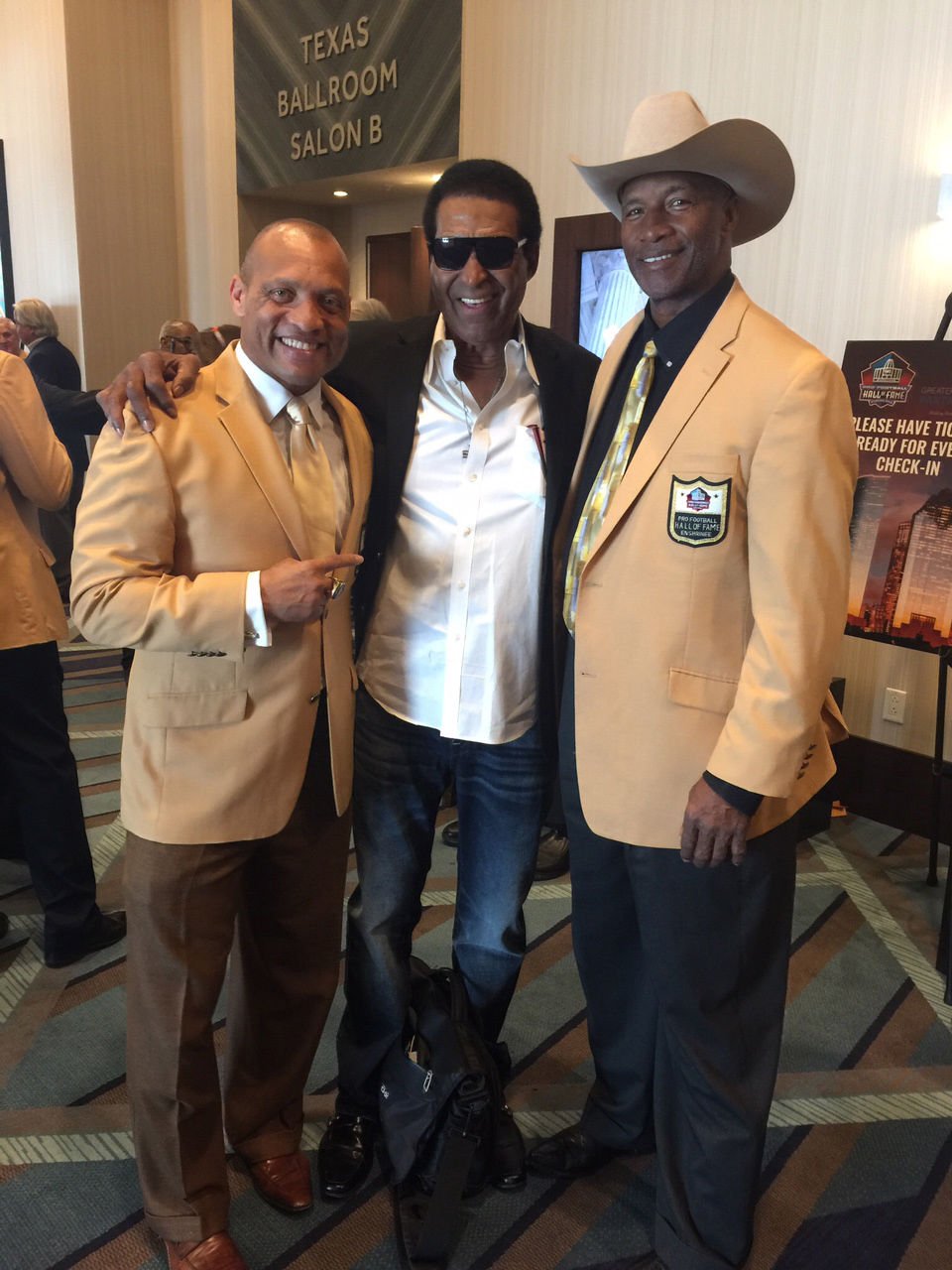 Los Angeles Rams linebacker Isiah Robertson walks to the sideline against the Dallas Cowboys in the 1975 NFC Championship Game at the Los Angeles Memorial Coliseum on Jan. 4, 1976. The Cowboys defeated the Rams 37-7.

Robertson, 14 at the time, had spent the day on the water with two of the Pine View High School coaches until the sun went down past the horizon. It was a nice day spent with men Robertson looked up to as role models ... until the boat ran out of gas. Luckily, they had an extra fuel can.

The next thing Robertson knew, he was thrown from the boat. The engine had sparked and the fuel tank had exploded. In a haze of smoke and burning debris, he desperately swam back to shore, praying as he paddled.

By the time he reached dry land, his coaches had drowned. That memory has not left his mind since.

Robertson grew up that day. He knew life would be anything but easy.

Fifty-four years later, that belief is still with him.

“Life became very precious to me,” he said. “I’ve been trying to give back all my life to thank God for sparing me and giving me an opportunity to have this unbelievable life and the great people I’ve met.”

Fans of Southern football during the late 1960s and early 1970s know Robertson’s story. As a member of one of Southern’s most talented teams, he was a rising star. The 1969 Jaguars featured 10 future NFL players, four future Pro Bowlers and a future Pro Football Hall of Famer.

On Saturday, he’ll go into the Black College Football Hall of Fame in Atlanta.

“It’s a real honor to be affiliated with some of the greatest black athletes to ever play sports,” Robertson said. “Words can’t express my gratitude to the selection committee, to all of the number of people that were nominated and the few that were actually selected.”

It all began with those great teams at Southern.

“It was an honor to play with those guys and see them go so far in their career,” Robertson said. “For a small black university like Southern, compared to Ohio State and Purdue and Texas, it was amazing to see the success we had on the pro level.”

The highlight of that stellar 1969 season came against Grambling, when Robertson intercepted a pass in the end zone with no time left and returned it 102 yards for a game-winning touchdown. Robertson still holds the record for longest interception return in series history.

He remains the only Southern player selected in the first round of the NFL draft; the Los Angeles Rams picked him 10th in 1971.

Sacks and tackles weren’t official statistics in those days, but Robertson was generally considered one of the fastest outside linebackers of his generation. He had a knack for being around the ball and making big plays, earning him 1971 NFL Defensive Rookie of the Year honors and the first of his six Pro Bowl selections.

During his time in Beverly Hills, Robertson golfed with Jack Nicklaus and threw parties with Joe Namath and Farrah Fawcett.

He owned 14 houses across the country. He was the first black man to own a home at Beau Chene Country Club in Covington — a dream come true for someone who grew up in a completely different world just a few miles down the road.

Robertson had roles in movies and television. He once presented the nominations for best actor at the Emmy Awards.

By the time he was traded to the Buffalo Bills in 1979, Robertson signed a four-year contract worth $1 million, making him one of the highest-paid linebackers in the NFL.

But like the boy in that boat, Robertson’s life turned upside down.

Robertson admitted to “dabbling” in drugs during his pro career but claimed it wasn’t serious. It wasn’t until after retirement that Robertson sunk into a full-blown crack-cocaine addiction.

For about two years, he was in denial about his problem, comforting himself with platitudes of "I’m not that bad" or "I’m not like those people."

Pretty soon Robertson would spend a week’s time in a crackhouse, strung out and blowing through $25,000 in a month.

He lost everything — the money, the houses, his family and friends.

The lowest of lows came in 1986, when Robertson was involved in what he described as a dope deal gone bad. One thing led to another, and the drug dealers beat him within an inch of his life.

“They took a shotgun and almost beat me to death,” he said. “They had the gun right there in my mouth about to pull the trigger, and the gun jammed.”

Robertson escaped, but in a 2007 interview with the Los Angeles Times he said the beating left him with 13 broken teeth and a head injury that required 100 stitches.

As Robertson lay bloodied and near death, with the taste of a shotgun barrel still fresh on his tongue, he thought of that day in the boat so many years ago. He said he knew it was a sign that he was meant for something else.

Robertson spent the next few years getting clean. He eventually landed in Mabank, Texas, about an hour southeast of Dallas, where he opened the House of Isaiah, a faith-based rehab facility for drug and alcohol addicts who have nowhere else to go.

The program helped more than 5,000 young men over the past 28 years return to society, Robertson said. That work — not the accolades, fame and money that came with football — is what Robertson considers his greatest accomplishment.

“If you knew somebody in a burning building and you knew that person needed help, would you run in and grab that person and save their life?” asked Mark Pincus, who works with Robertson at the House of Isaiah. “(Robertson) runs into people’s homes, the most inner part of their houses, and grabs men and helps them overcome these drug afflictions.”

Robertson is on the board of directors for the NFL Players Association and is president of the Dallas chapter. He’s involved with the Special Olympics and for a long time coached several Little League baseball teams.

Robertson is also active at Southern as a recruiter in Dallas with the "I Recruit SU" program.

“(Robertson) was just one of those guys who had an impact on the game,” said Aeneas Williams, the former Southern star defensive back and Pro Football Hall of Famer. “As I’ve gotten to know him over the years, I’ve seen his passion for the current players, but also his passion for the guys he played with. He’s very involved still and very conscious of the needs of former players and very conscious of doing whatever he can to continue to help Southern recruit athletes and be that school it was for many of us.”