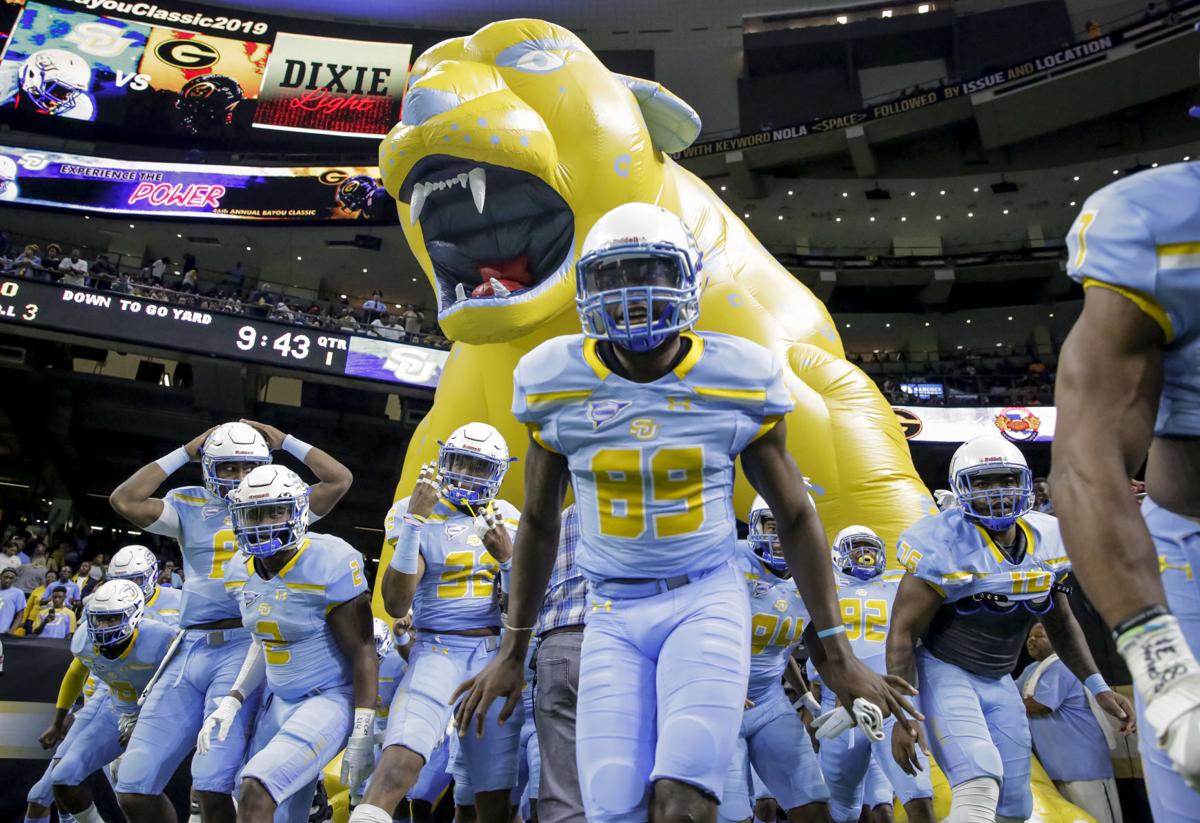 Southern wide receiver Tyler Brown and his teammates take the field against Grambling during the 46th Annual Bayou Classic at the Mercedes-Benz Superdome on Saturday, Nov. 30, 2019. 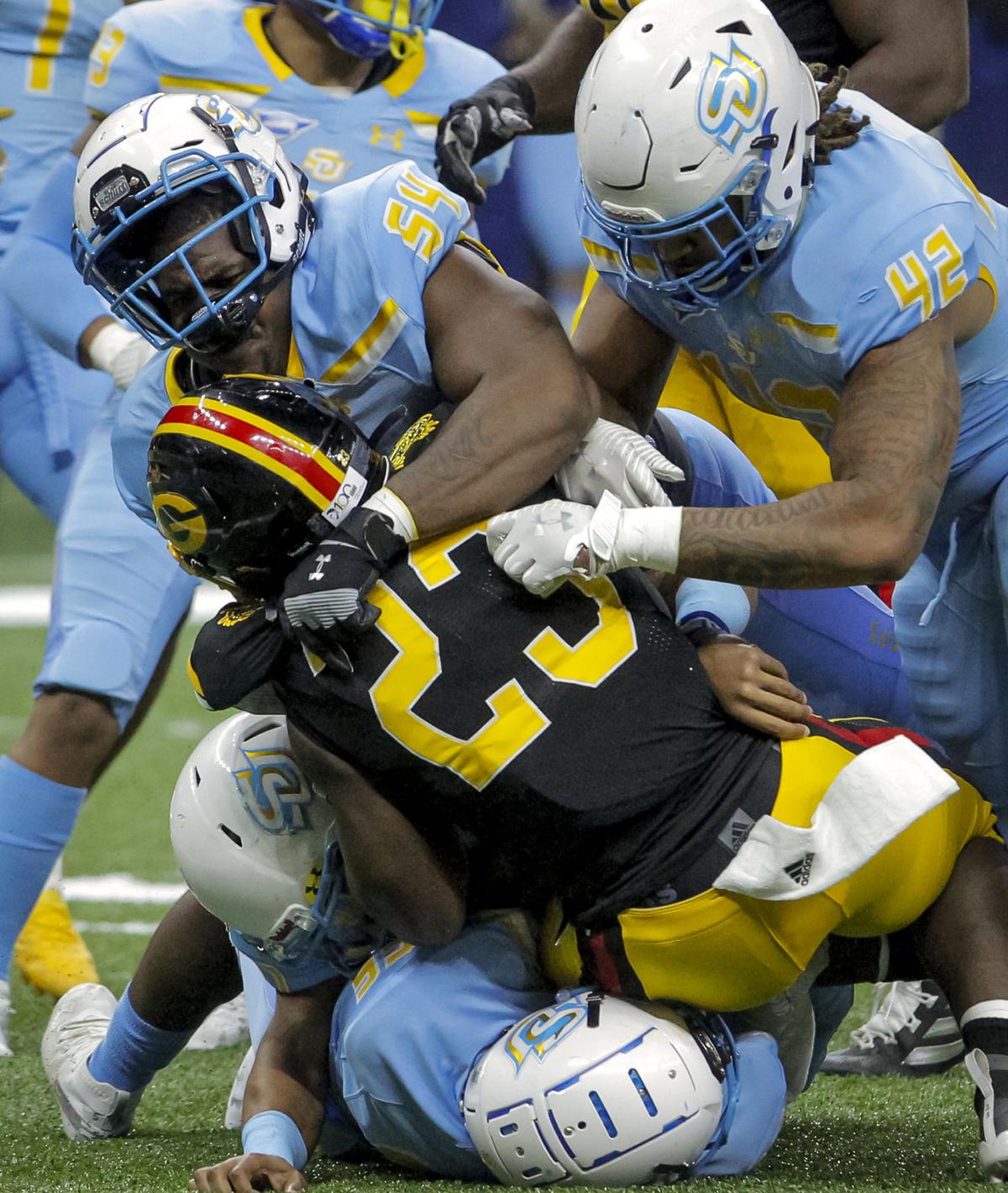 Southern defensive tackle Davin Cotton (54) and Joe Davis (42) tackle Grambling's Keilon Elder (23) during the first half of the 46th Annual Bayou Classic at the Mercedes-Benz Superdome on Saturday. 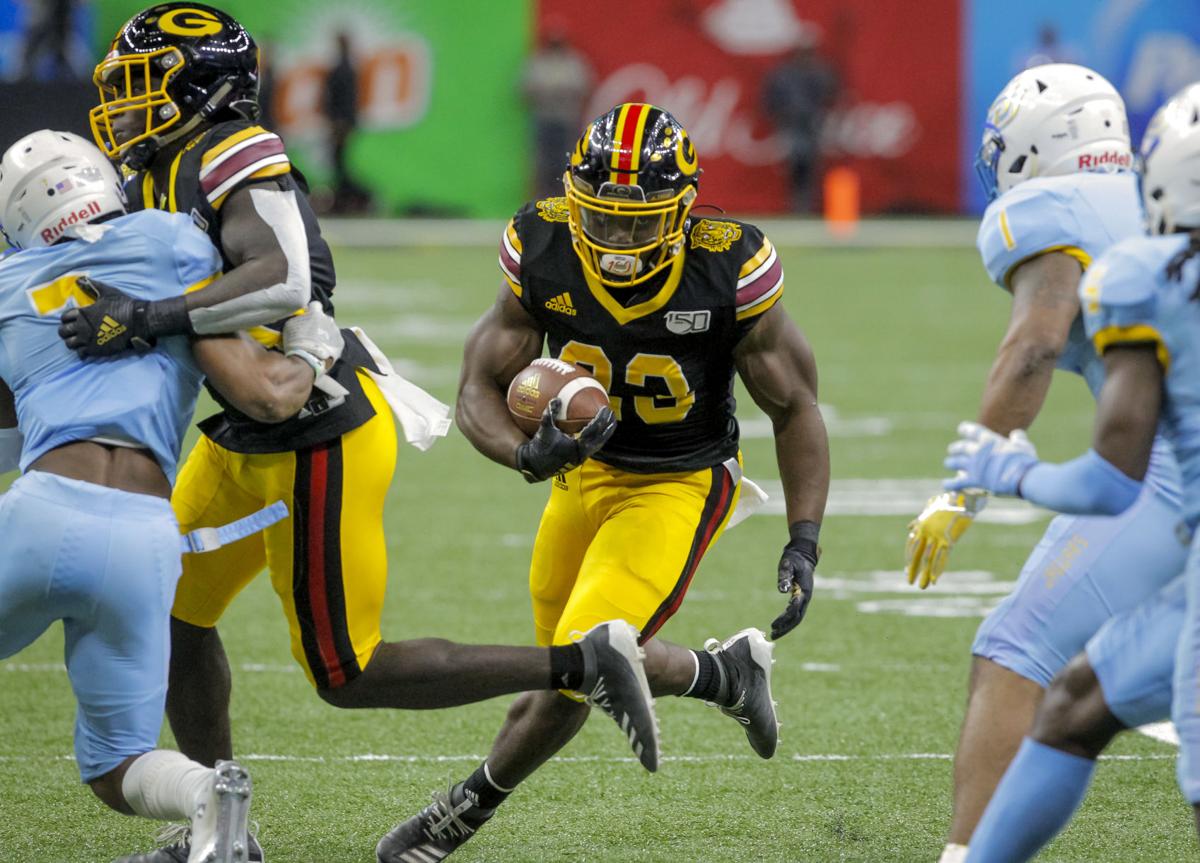 Grambling running back Keilon Elder (23) finds running room against Southern during the first half of the 46th Annual Bayou Classic at the Mercedes-Benz Superdome on Saturday, Nov. 30, 2019. 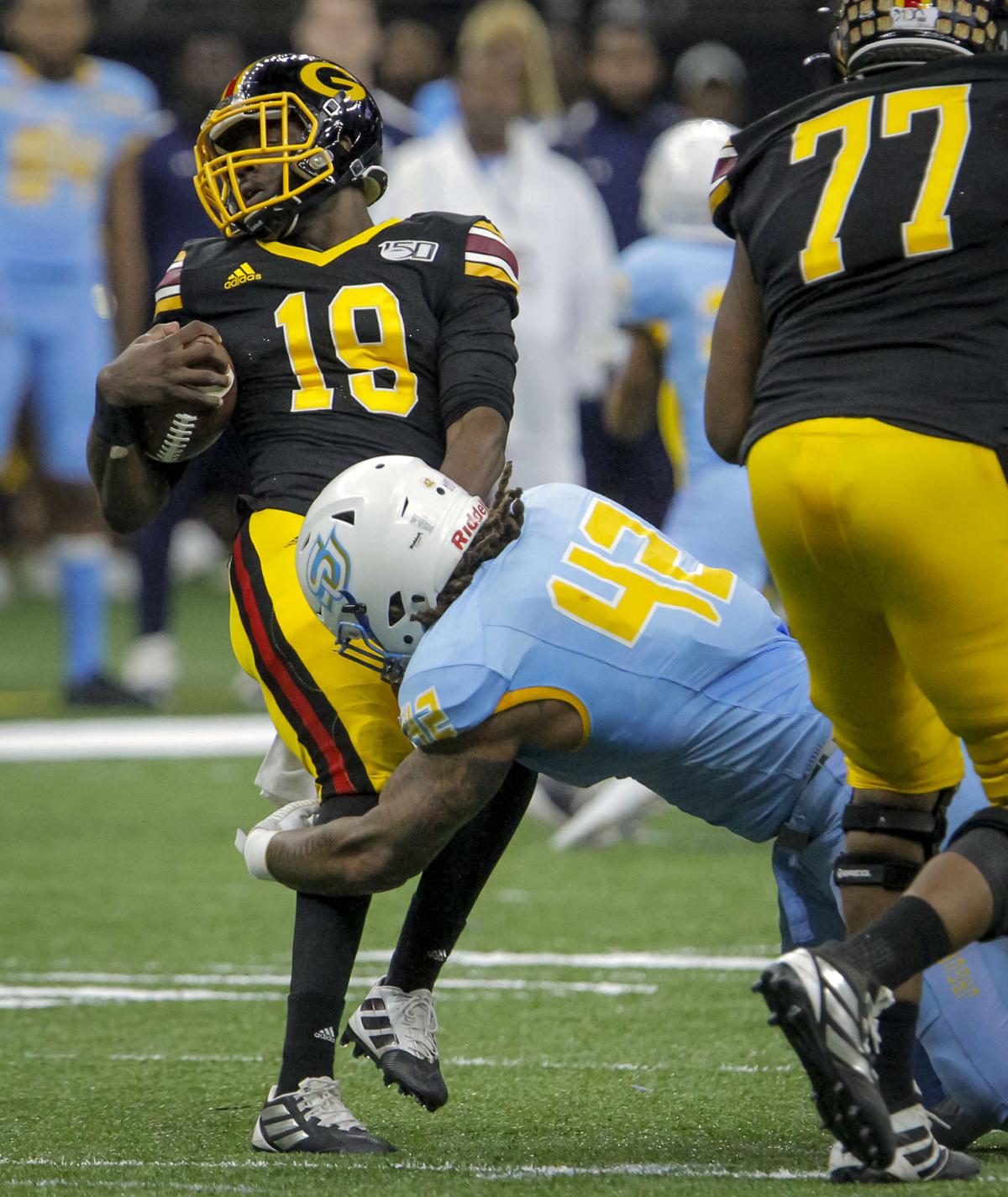 Grambling quarterback Geremy Hickbottom is tackled for a loss by Southern defensive lineman Joe Davis during the first half of the 46th Annual Bayou Classic at the Mercedes-Benz Superdome on Saturday, Nov. 30, 2019.

Southern wide receiver Tyler Brown and his teammates take the field against Grambling during the 46th Annual Bayou Classic at the Mercedes-Benz Superdome on Saturday, Nov. 30, 2019.

Southern defensive tackle Davin Cotton (54) and Joe Davis (42) tackle Grambling's Keilon Elder (23) during the first half of the 46th Annual Bayou Classic at the Mercedes-Benz Superdome on Saturday.

Grambling running back Keilon Elder (23) finds running room against Southern during the first half of the 46th Annual Bayou Classic at the Mercedes-Benz Superdome on Saturday, Nov. 30, 2019.

Grambling quarterback Geremy Hickbottom is tackled for a loss by Southern defensive lineman Joe Davis during the first half of the 46th Annual Bayou Classic at the Mercedes-Benz Superdome on Saturday, Nov. 30, 2019.

Davis, who played his high school ball a few miles from the Mercedes-Benz Superdome, set off an explosion inside when he blocked a Grambling field-goal attempt with five seconds remaining to preserve Southern’s 30-28 victory in the 46th Bayou Classic on Saturday.

The teams traded the lead three times in the second half and it looked like there might be a fourth when Miguel Mendez lined up for a 40-yard attempt. But Davis got some penetration and got his left hand on the ball for his second block of the night. He partially blocked a 50-yard attempt earlier in the quarter.

“Dakavion Champion got some push and I got my pads up,” said Davis, a senior who prepped at Clark High School. “He got the lineman off balance and I just used my frame to block it. I knew I had a chance to get it because I got the first one.

“It always feels good to make impactful plays; I was ecstatic.”

So was everyone wearing gold and Columbia blue.

“The whole year flashed before my eyes,” said Register, who caught seven passes for 75 yards and two touchdowns. “I saw myself running during summer workouts and thinking this was all for nothing. I’m glad it got blocked.”

The victory lifted Southern (8-4, 6-1 in the Southwest Athletic Conference) to the SWAC West Division title and a berth in the league title game at Alcorn State next Saturday. Grambling (6-5, 4-3) was bidding for the same but saw its six-game winning streak snapped.

Southern (8-4, 6-1) twice called timeouts before the field-goal attempt to ice Mendez but came up with the block to complete a rally from an 18-point deficit in the first half. Mendez missed two other field-goal attempts, a 46-yarder in the second quarter and a 50-yard attempt that Davis got his right hand on.

Freshman running back Jarod Sims scored on a 36-yard run for the winning points, his second touchdown of the night, with 14:11 to play. But the Jaguars missed the point after on a low-trajectory kick by Cesar Barajas, leaving the door open for the Tigers.

Grambling marched from its 20 to the Southern 23 but quarterback Geremy Hickbottom, who threw for one touchdown and ran for another, threw incomplete on third-and-1 with 10 seconds left, setting up the fateful field-goal attempt.

“It seems every game this year has been a close one,” Register said. “We know how to win. We went out there and got one. We never got down on each other. We didn’t curse out anybody. We kept our head and made it happen.”

Sims also scored on a one-yard run on the final play of the first half to give Southern a boost at halftime, cutting the Grambling lead to 21-17. Sims led Southern with 89 yards on seven carries while quarterback Ladarius Skelton completed 18 of 25 passes for 181 yards and two scores.

Hickbottom had 155 yards passing and 55 rushing. Keilon Elder sparked the Tigers' offense with 112 yards on 19 carries, including a one-yard run to give Grambling a 21-3 lead midway through the second quarter.

Southern took its first lead with 4:40 left in the third quarter on a 77-yard, 13-play drive. Skelton capped it with a 6-yard touchdown pass on third down to Register, his second of the night and the seventh consecutive game with at least one. Devon Benn ran the ball eight times for 55 yards on the drive.

Grambling answered on the next possession when Hickbottom ran three yards for a score to end a 75-yard drive. Hickbottom kept the drive alive with a 16-yard scramble on third down and hit Lyndon Rash with a 25-yard strike two plays before the touchdowns.

Southern closed the first half with a rush after falling behind 21-3, scoring two touchdowns in the final four minutes. The second touchdown came on Sims' one-yard dive with no time remaining and gave the Jaguars a huge shot of adrenaline.

A 39-yard completion from Skelton to Cameron Mackey set up a four-yard scoring pass from Skelton to Register with 3:38 to get Southern going. But Grambling threatened to answer. A 25-yard run by Elder and two Hickbottom completions helped move the Tigers inside the Southern 30. The drive stalled and Mendez missed a 47-yard field-goal attempt.

Southern got the ball back with 50 seconds left and managed to beat the clock. A 38-yard pass from Skelton to Register put the ball at the Grambling 15 with 24 seconds left. Another completion to the 1-yard line left Southern scrambling to get a play off and it appeared Grambling stopped the play but the Tigers where whistled for offsides. Southern got an untimed down and Sims plunged over on an option dive play.

Until that late run, it was all Grambling. Hickbottom, who was 9 of 13 for 69 yards, connected with De’Vante Davis for a 13-yard TD on third-and-8 for a 7-0 lead. The Grambling defense held Southern to a 19-yard field goal after a goal-to-go series.

After an exchange of punts, Grambling rolled through the Southern run defense for a 63-yard scoring drive, all on the ground. Elder dashed 17 yards to get it going and C.J. Russell finished it with a 27-yard run, his first touchdown this season.

Disaster struck for Southern on the ensuing kickoff. Shykee Thomas mishandled a short kickoff resulting in a scramble for the ball. Kash Foley emerged from the bottom of the pile with the ball at the Jaguars’ 24. Elder went 23 yards on second down to set up his one-yard TD run for a 21-3 lead.

“We weren’t doing the little things,” Skelton said of the Jaguars’ early struggles. “We went in at halftime, settled down and talked about, came out here with our heads on right. We do have unfinished business and we’re ready to take it on next week.”

Southern makes habit of pulling rabbit out of hat, most recently in 30-28 win over Grambling

Team Houdini did it again.