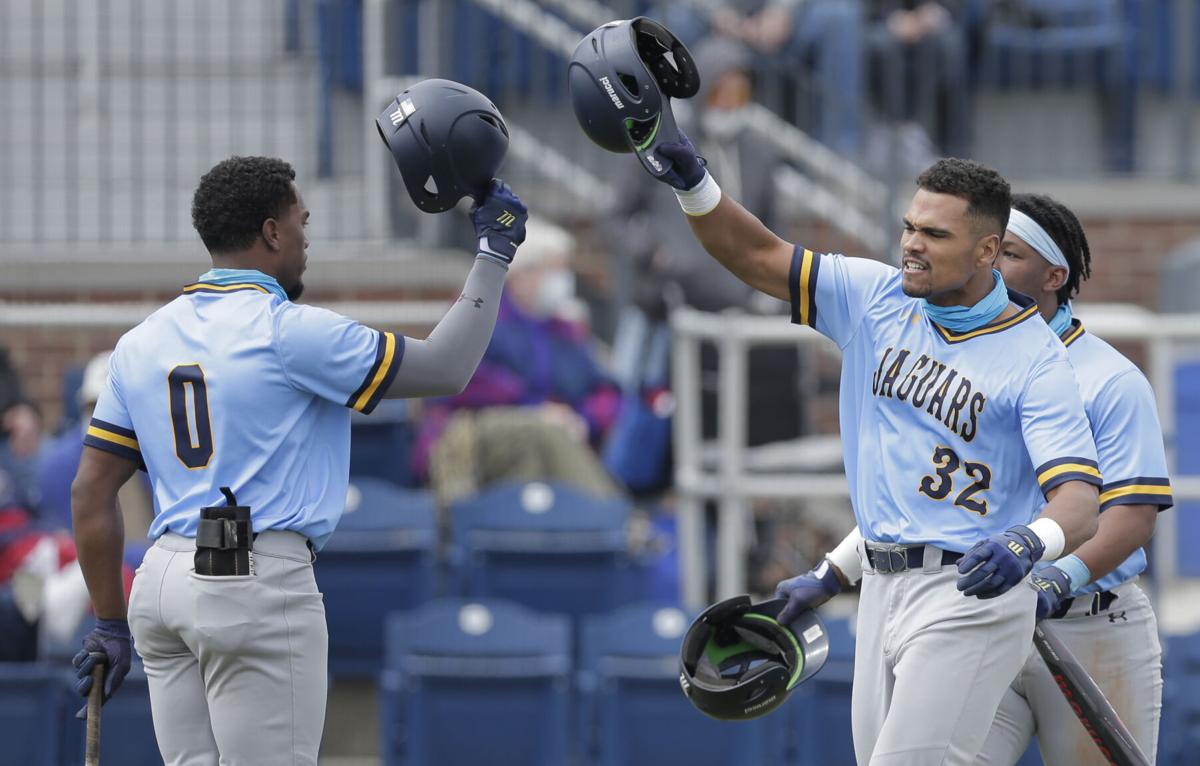 Southern's O'Neill Burgos, right, taps helmets with teammate Colton Frank after Burgos hit a home run against UNO on Feb. 21 at Maestri Field in New Orleans. Burgos and Frank both missed time with injuries this season but returned in time to lead the Jaguars to the NCAA Austin regional this weekend. 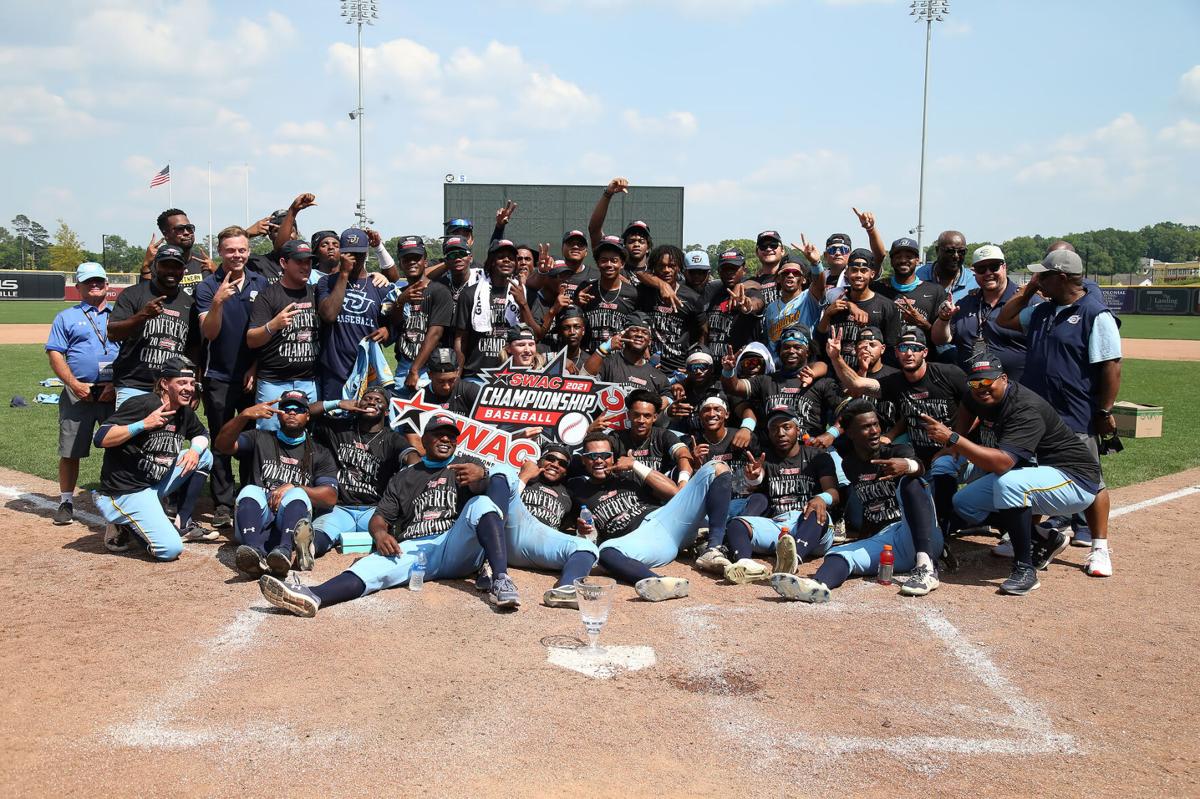 Southern players pose for a celebratory photograph after winning the SWAC tournament championship game 7-6 over Jackson State on Sunday in Madison, Ala.

When Southern baseball coach Chris Crenshaw looks back on his team’s improbable run to the Southwestern Athletic Conference championship May 23, he sees a group of players that took advantage of good health and conditioning to play their best.

The Jaguars (20-28), who finished third in their division with a 13-11 record, overcame the odds at the SWAC tournament — but only after surviving an up-and-down regular season.

The lowest point was a seven-game losing streak in April that included sweeps by Prairie View and nonconference opponent Louisiana-Monroe. During the slide, Southern was outscored 35-7.

Four Louisiana baseball teams — LSU, Southern, McNeese State and Louisiana Tech — are off to take their cuts in the NCAA baseball tournament t…

That losing streak coincided with injuries to six players — but most of them were back by the time Southern won its last two conference series.

Then came the tournament, when conditioning became a key factor as Southern played six games in five days to claim the conference crown.

“Six games in five days — that was tough,” Crenshaw said. “I give all the credit to the guys. We started conditioning a little bit more heading into the tournament, and I feel like it paid off.”

Indeed, the payoff for Southern was its 17th SWAC tournament title and a berth in NCAA Austin regional. The fourth-seeded Jaguars take on regional Texas, the No. 2 national seed, at 1 p.m. Friday in a game that will stream on the Longhorn Network.

Southern was able to withstand the tournament schedule thanks to the return of players like O’Neill Burgos, Jovante Dorris, Isaiah Adams and Colton Frank. All missed time during the regular season with injuries, but each came up big in the tournament.

“We got some guys back healthy that had been missing for three or four weeks, and we’re a different team when we have those guys in the lineup,” Crenshaw said. “It showed the last two weeks of conference play and then in the tournament.”

Southern faced nothing but elimination games after splitting its first two games of the tournament. Frank helped the Jaguars get back on track with three hits and four RBIs in a 10-5 win over Alcorn.

With Adams driving in four runs, the Jaguars then exploded for 21 hits in a 24-3 win over Prairie View. That led to one more matchup with the Panthers, an 8-4 win highlighted by Dorris’ two hits and three RBIs.

A closer look at the Austin regional: Fast facts about Southern, Texas, Arizona State and Fairfield

Team records, best pitchers, best hitters, coaches and other things to know about the four teams in the Austin regional.

Southern advanced to the title game where Jackson State — undefeated in 27 conference games for the season — awaited.

On the biggest stage of the season, the best was still to come for Southern.

Trailing 6-4 in the top of the ninth, the Jaguars set the table for Burgos when Dorris led off with a single and Judah Wilbur drew a walk. Burgos then sent an 0-1 pitch from JSU reliever Steven Davila over the left-field wall to give Southern the lead.

In the bottom of the ninth, Enrique Ozoa needed just seven pitches to retire Jackson State and hand the Tigers (34-9) their first, and costliest, conference loss of the year.

The win earned Southern its 13th appearance in the NCAA Division I postseason, and it put the finishing touches on an exhausting run through tournament.

Don’t tell the Southern baseball team how much of a long shot it is as it heads west to play Texas in the NCAA regional first round Friday.

But with an extra week off to recover, the Jaguars want to carry their momentum into Austin, Texas.

After the grueling tournament schedule, Crenshaw likes having the extra time to prepare his team.

“We scrimmaged and we got in some stuff that we needed to work on to prepare for the regional,” Crenshaw said. “The downtime was pretty good as far as scrimmaging and practicing, and getting our legs back beneath us.”