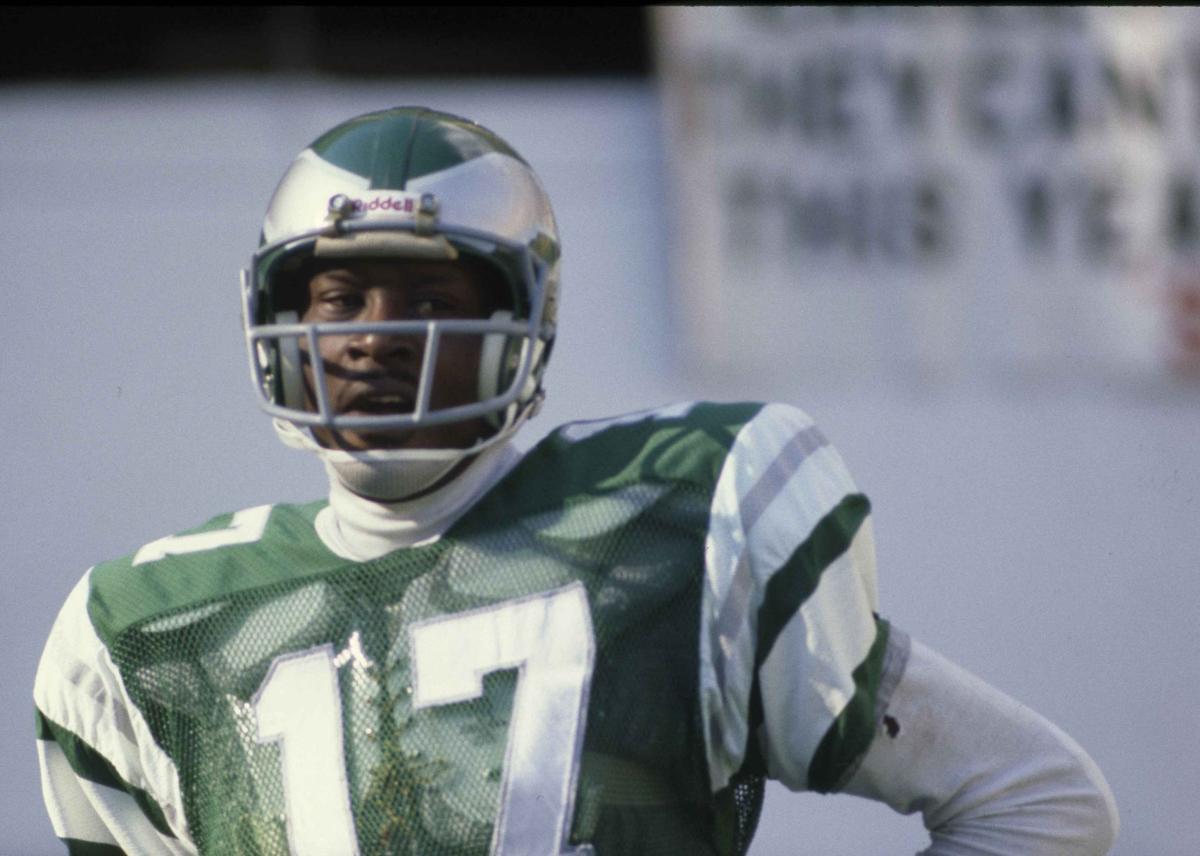 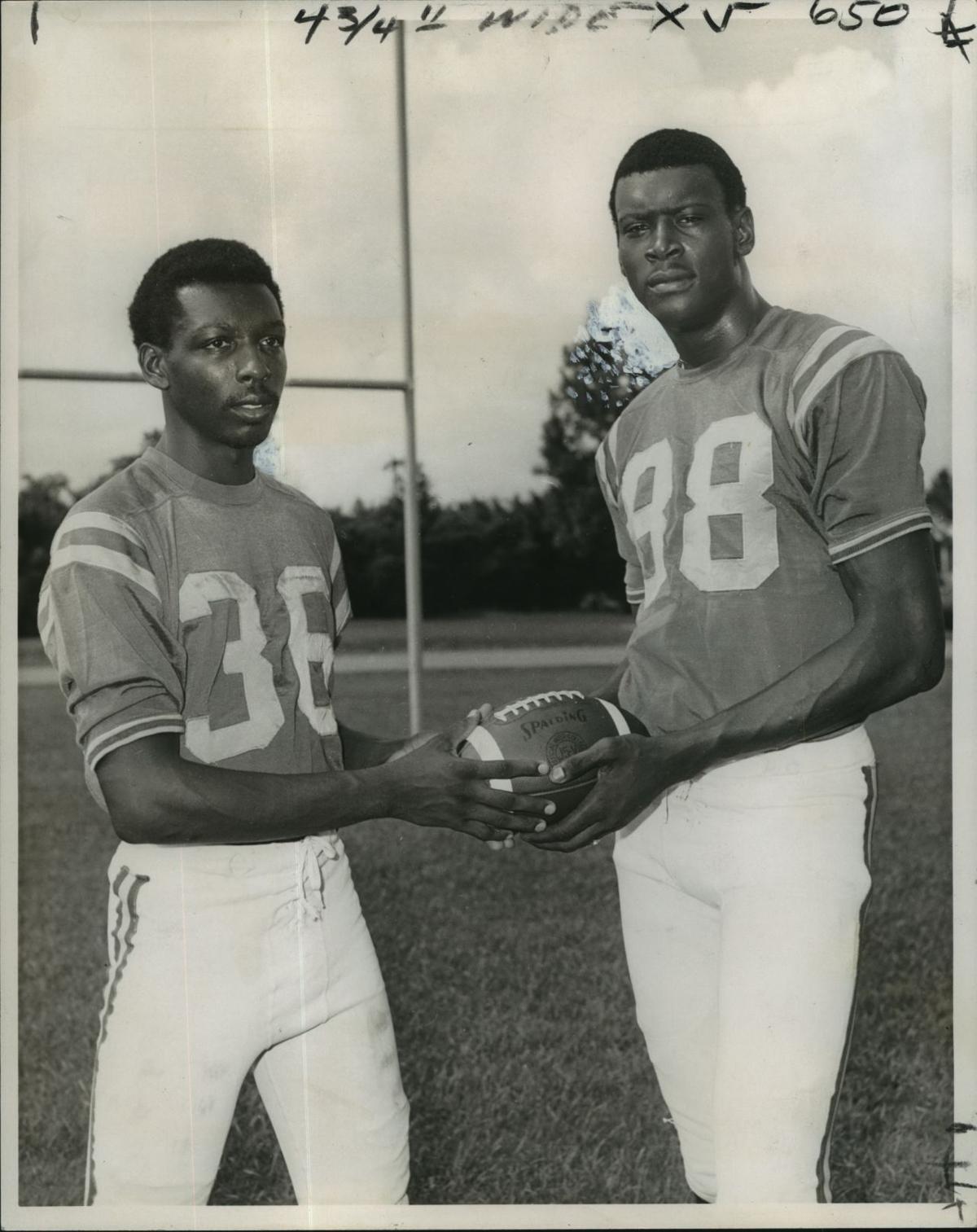 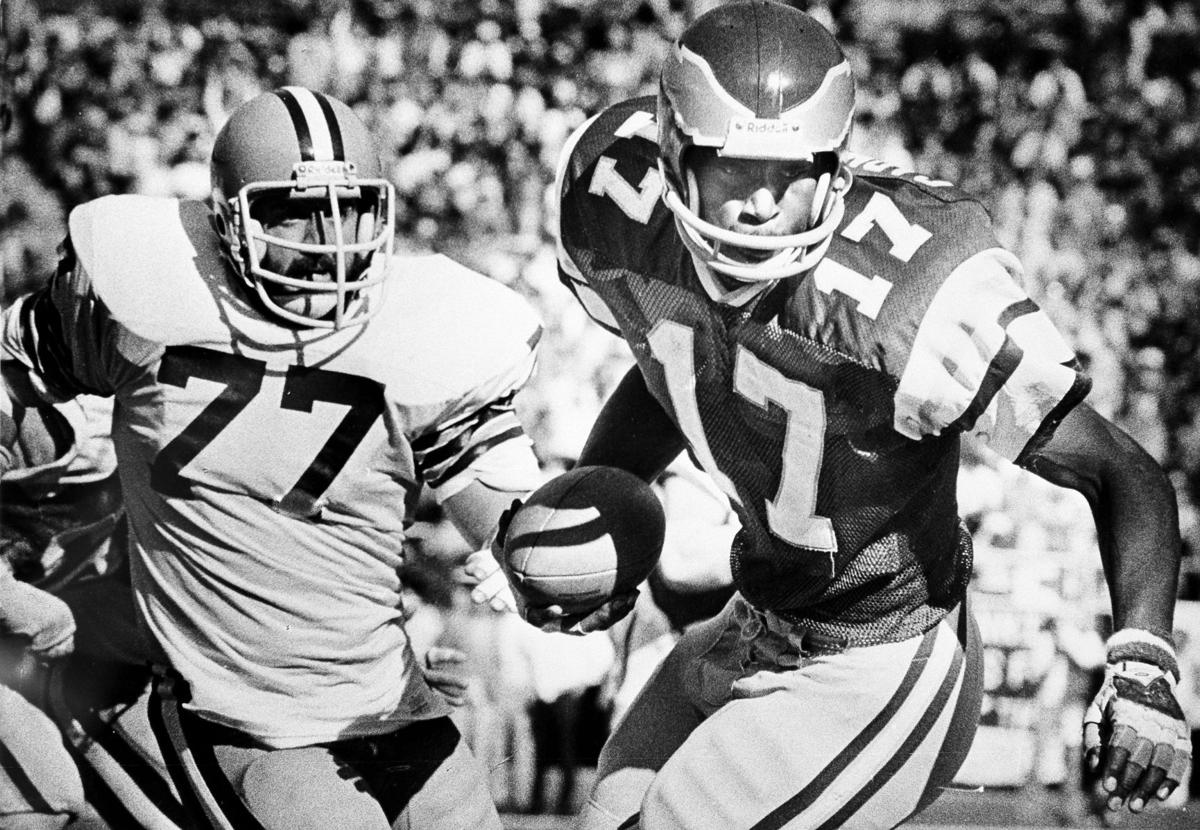 Harold Carmichael of the Philadelphia Eagles pulls away from Lyle Alzado of the Cleveland Browns after catching a pass during a game Nov. 5, 1979, in Philadelphia. The catch broke an NFL record for passes caught in consecutive games at 106 games. 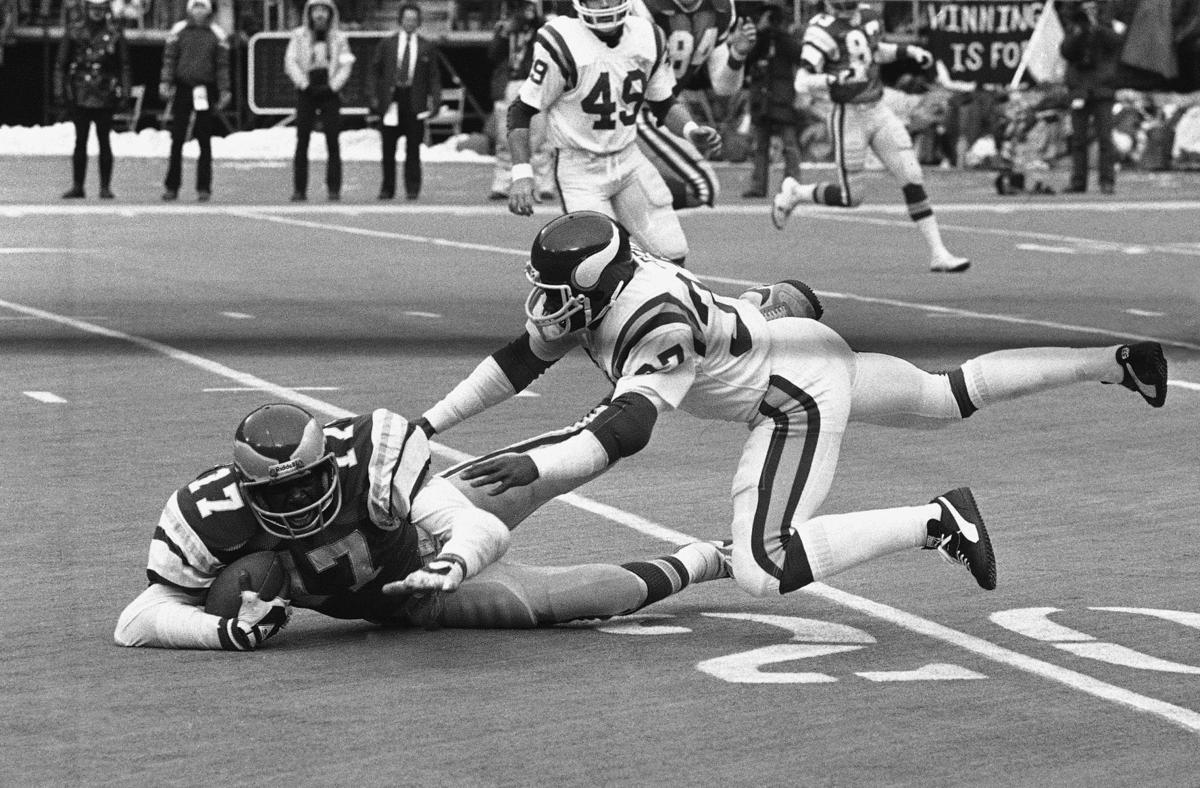 Eagles receiver Harold Carmichael crashes to the frozen artificial turf after catching a pass late in second quarter of an NFC playoff game against the Minnesota Vikings on Jan. 3, 1981, at Philadelphia. Minnesota's Willie Teal, left, could not stop the catch.

Harold Carmichael of the Philadelphia Eagles pulls away from Lyle Alzado of the Cleveland Browns after catching a pass during a game Nov. 5, 1979, in Philadelphia. The catch broke an NFL record for passes caught in consecutive games at 106 games.

Eagles receiver Harold Carmichael crashes to the frozen artificial turf after catching a pass late in second quarter of an NFC playoff game against the Minnesota Vikings on Jan. 3, 1981, at Philadelphia. Minnesota's Willie Teal, left, could not stop the catch.

Carmichael will be enshrined into the Pro Football Hall of Fame this August as part of a Centennial Class that will include 20 inductees instead of the usual five. Carmichael and 14 others will make up this special class, which will complement the five modern-era players to commemorate the NFL’s 100th anniversary.

Carmichael played all but one of his 14 NFL seasons with the Philadelphia Eagles. In 1973, his first season as an everyday starter, he led the NFL in both receptions (67) and yards receiving (1,176). He finished his career with four Pro Bowls while recording 590 career receptions, and at the time of his retirement, that figure ranked No. 5 in NFL history.

“This is the ultimate honor that you get in the National Football League,” Carmichael told the NFL Network after his induction was announced Wednesday morning.

Carmichael will join fellow Southern alumni Aeneas Williams (class of 2014) and Mel Blount (class of 1989) in the Hall of Fame.

“All our student-athletes and coaches are grateful to have a chance to represent him day-to-day as we go about the business of trying to be the best we can be,” Southern athletic director Roman Banks said. “I want to personally congratulate him, and our president, Dr. (Raymond) Belton, also extends his congratulations.

“It’s been very rewarding to see an ambassador of our athletics program take another step forward.”

Carmichael revealed on "Good Morning Football" that he had known about his Hall of Fame induction for a while, but he had to keep that secret to himself until it was announced Wednesday.

Exclusive Look: HOF President David Baker calls @lookitin to inform him that he has been elected to the Hall of Fame.#PFHOF20 | @Eagles pic.twitter.com/qYH2ZfwvNs

Pro Football Hall of Fame president David Baker called Carmichael, and after a brief introduction explained to him: “It’s my great privilege to share that you’re going to have a bronze bust in Canton, Ohio.”

As a shocked Carmichael breathlessly reeled off a series of thank-yous and oh-my-Gods, Baker told him he would be a member of the Centennial Class, and that the Hall of Fame was “going to tell your story and keep your legacy alive forever.”

That whole time, Carmichael was thinking about his life’s journey up to the moment of that phone call.

“Oh, wow. Oh boy. This is — I’m honored. Oh gosh, I never thought this would happen, but oh, thank you God,” Carmichael said. “Thank you for telling me this, David. I appreciate you. I feel like I’m dreaming. I don’t know what to feel. I feel so numb. I feel like — I don’t know what to say, but the first thing I thought about is growing up and the people I was around.

“From Jacksonville, Florida, up to here in New Jersey now, just thinking about all the people I would like to share this with, because it wasn’t me by myself. There were times when I wanted to quit, and people told me, ‘Keep going.’

“It’s a blessing to me to be able to be a part of the gold jacket guys. It’s something that seems like it escaped me for 30-something years. But it’s come to the place now. With God’s grace, he let me get to this point now.”

Carmichael thought about the days of his youth, playing with the neighborhood kids in his native Jacksonville on whatever surface they could find — tackle on grass, two-hand touch on asphalt. When it rained, they moved the game inside a bowling alley that wasn't fully constructed.

Those days in Jacksonville taught the lanky 6-foot-8 Carmichael the skills that took him from a walk-on third-stringer at Southern to the Pro Football Hall of Fame. He shared the moment it all changed for him in his freshman year at Southern.

“We were playing in Shreveport, Louisiana, and our starting wide receiver got hurt, and the backup receiver was (the late) Isaiah 'Butch' Robertson. ... They were calling for him, but he was down at the other end of the bench," Carmichael recalled.

"The coach turned around and said, ‘Carmichael, get in the game.’ Nobody played that position but me for the next 3½ years. Butch Robertson … from that play, he went from wide receiver to linebacker.”

Robertson, of course, is an all-time Southern great, just like Carmichael. Both Robertson and Carmichael are already members of the Black College Football Hall of Fame — Carmichael was inducted in 2018, Robertson in 2017.

Before Wednesday’s announcement, Carmichael said his induction into the Black College Football Hall of Fame was one of his greatest achievements. He did not think he’d see the day when he’d have a bust in Canton, Ohio.

Carmichael was named to the NFL’s All-Decade team for the 1970s. Despite not playing in the 1970 season and not starting full-time until 1973, Carmichael caught more passes during that decade (407) than every player but his former Eagles teammate, Harold Jackson. From 1972-80, he set a then-NFL record by making a reception in 127 straight games.

He still owns virtually every major career receiving record for the Eagles despite playing his final season for them in 1983.

Carmichael, who now lives in New Jersey, is still a beloved figure within the Eagles organization. After his retirement as a player, he returned and worked for the organization for nearly another 20 years.

"Our entire organization is so proud to see Harold earn this well-deserved honor,” team chairman and CEO Jeffrey Lurie said. “Harold revolutionized the wide receiver position and became one of the most productive players of his era and in the history of our franchise. He was inducted into the Eagles Hall of Fame in 1987 and his records will always rank among the all-time greats, but Harold's true contributions to our game extend far beyond his on-field accomplishments.

"Harold has served as a role model, mentor, and friend to so many during his four-plus decades in Philadelphia as a player, executive, and ambassador.”